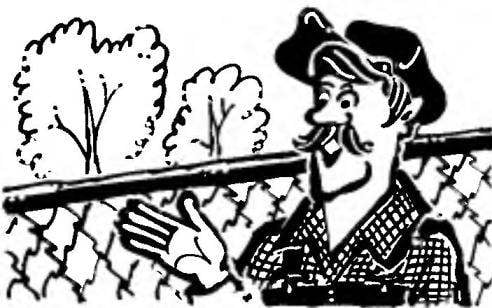 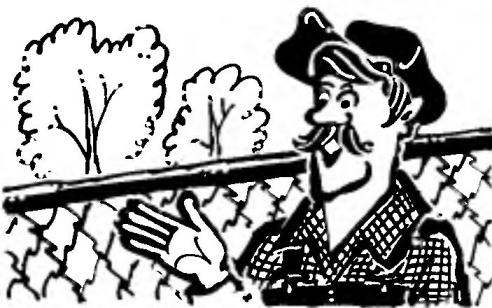 The journal “modelist-Konstruktor” write for a long time, almost from the very origin; learned a lot of useful for yourself. In response to your appeal to be not only a reader, but the author decided to write about his experience of producing a mesh-netting. The method and the device so simple that it is accessible to all who wish to fence suburban area, to make an aviary for birds, a cage or enclosure for other animals.

Of course, now in trade can be purchased in almost any material, but there was another kind of shortage of cash. And on the proposed technology can work even with scraps of wire. At the time, I have reviewed a lot of literature, and nothing but General schemas not found. So much to reached in practice. I hope my experience is useful to someone.
For the independent production of mesh, netting perfect not too stiff wire with a diameter of 4 mm. of Course, it is easier and more productive mechanized wrapping of the mesh from the coil wire. But for manual work, you can use any wire cutting. For example, I got a wire braid armored cable. It had to be unravelling, for convenience, to cut into pieces with a length up to 2 m, and even cleaned of bitumen (from roasting had to be abandoned, as it was burned zinc coating, and the wire was too soft).
All equipment consists of a work table and a simple mechanism of winding. The length of the table dictates the expected width of the grid and its width can be 300— 400 mm. On the counters and the mechanism for coiling, and a few pins for mounting are already woven mesh bands.
The coiling mechanism consists of a screw — a hollow steel cylinder with a spiral slit and a bracket for attaching it to the table. Inside the cylinder is rotated flat knife from a steel strip whose width is almost equal to the inner diameter of cylinder (d EXT). When coiling the knife is rotated by a handle, and they carried away the wire is pulled at the slit, thereby forming the grid cells.

The scheme of formation level of the grid.

Mechanized system for coiling mesh, netting:
1 — motor: 2 — reducer; 3 — the mechanism of winding; 4 — a gear belt; 5 — Bay wire; 6 — grid; 7 — table.
Production technology grid the following. Knife turn in the cylinder to align its plane with a hole where the insert the front end of the wire. The latter bent over the edge of the knife and run to the beginning of the spiral slit. Then the rotation of the blade form the first link of the mesh. Further, the wire when rotation of the blade moves along the turns of the slit; wherein at the entrance of the gap creates the tension of the wire and at the same time it raduetsya.
Get the links at the movement woven into the previous strip, and the ends of the wire after the regular irons are bent to the canvas mesh from falling apart. To reduce friction on the wire before entering the coiling mechanism should be lubricated.
A spiral slit can be obtained on a lathe in the mode of cutting metric thread. While step cracks should be double d EXT cylinder (or width of the knife), because by decreasing the step increase effort when coiling. The slot width should be not less than two diameters of the wire used and the number of steps on the cylinder — no more than three or four.
When manually winding the day can be made up to six meters of good-quality mesh.
Possible and mechanized winding, when the knife is driven in rotation by an electric motor. This will suit the engine power of 1.5 kW, for example, three-phase with 1500 rpm, is included in a regular single-phase grid by repeatedly described in the journal diagram. The optimal number of revolutions of the knife (40-60 rpm) will provide a worm gear with a ratio of 15 associated with the electric motor via pulleys through a belt transmission. This option is useful when using Bay wire which is fed continuously across the entire width of the grid and automatically tied in the coiling process; there is only time to stop the engine the foot pedal to cut off and bend the end of the next strip and fill it to get the next.
The town of KARPACZ, Kartaly, Chelyabinsk region