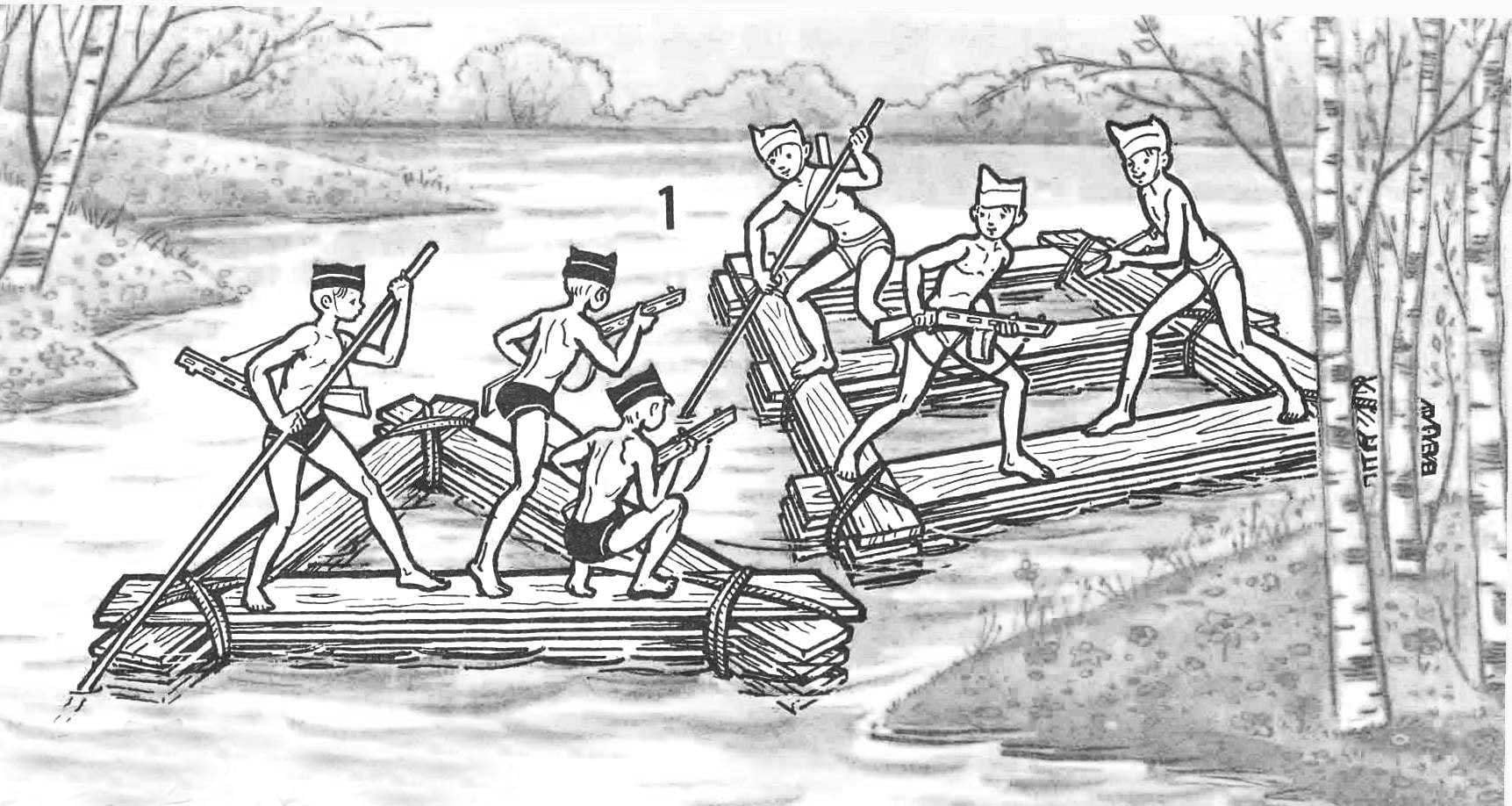 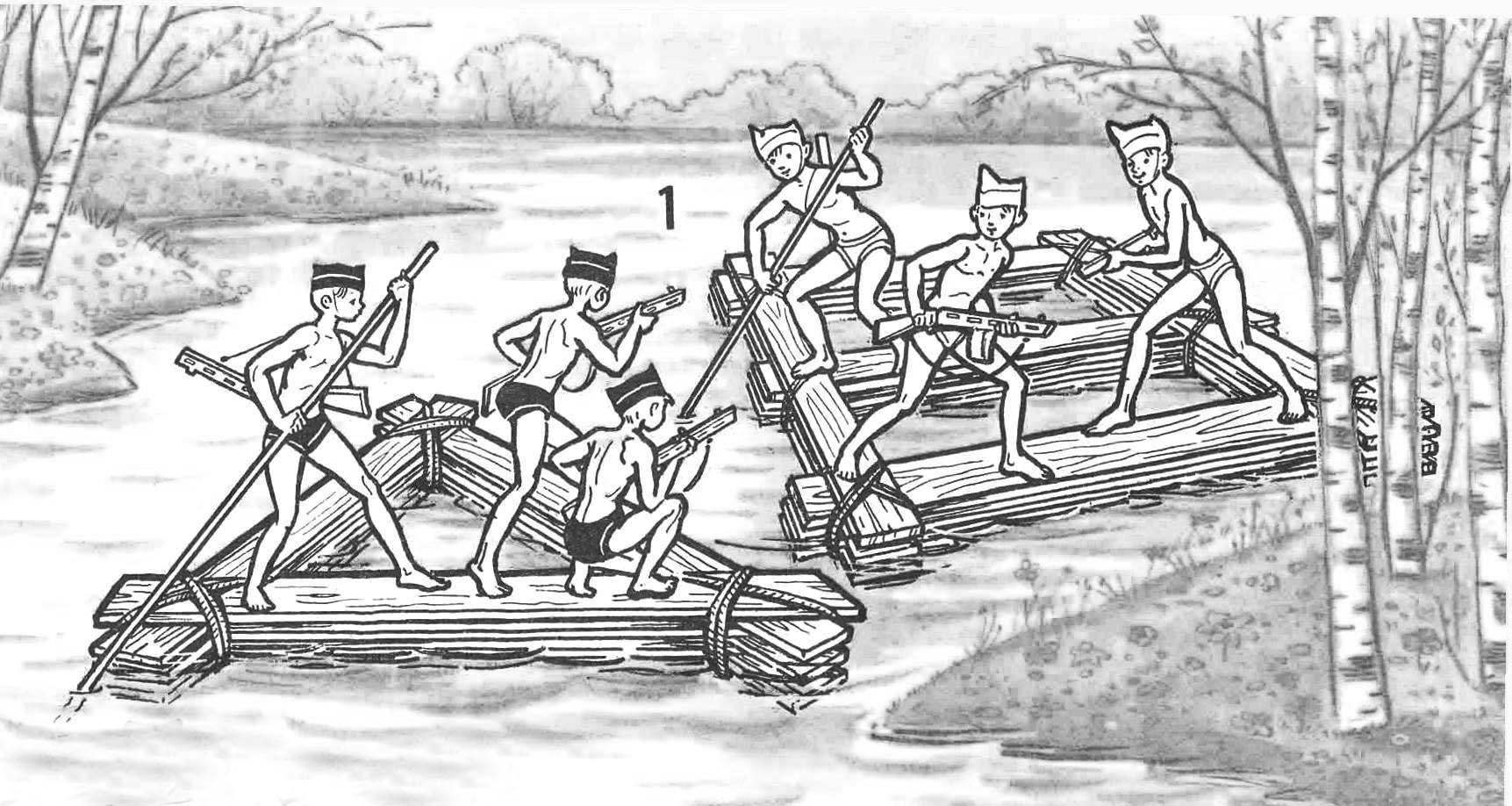 The glorious pages of military Chronicles of the Soviet Army and Fleet will be reflected in the summer pioneer games and competitions the jubilee. Young modelers and designers can show their ingenuity in the preparation and technical design of these games — including water maneuvers “Lightning”. We published several examples of homemade products that are easy to force themselves yunarmeytsev “Lightning”.
CROSSING
Especially fun for groups “Zarnitsa” can be amphibious landings and the crossing of water obstacles. For such competitions and implementation of crossings can be made the simplest watercraft of any suitable materials (see 3rd cover page).
The easiest way to cross the river on rafts made of boards. To do this, connect them 3-4 in a row, as shown in the figure. The dimensions of the sides of the raft of 2.5—3.5 m. In such rafts can carry models of machine guns, mortars, they are suitable for the crossing of two or three yunarmeytsev.
But not every summer camp you can find boards or logs, have to use other available materials. From a few dry poles to make a raft-based, resistance and buoyancy will give him the camera from a volleyball or soccer balls. If cameras are used in cloth or leather tires, then tires should be lubricated with castor oil or fish oil and dried.
The raft with four chambers can support while crossing water turn two or three young paratroopers. The figure shows how to construct such a raft, how to cross it.
Of smoothly planed pine boards with a length of 1.5 m and three motorcycle (or Bicycle) cameras can be built to cross such a “horse”, the crossing on which water hazards will give children great pleasure.
The Board is cut out of the seat, drilled holes, through which skipped the rope, fixing the camera, as shown in the figure. Three cells formed a convenient seat.
Sitting on this horse, yunarmeytsy relatively quickly cross the pond. The detachment commander whether to lead the crossing.
GOES EXPLORATION
For scouts required invisible, “quiet” boats, good masking of the paratrooper. We offer several of these devices for individual hidden crossing water obstacles.
Quickly cross the scout will help here is a two-bladed paddle with a rubber chamber in the middle. Thanks to him, the young army man can float on the back, unseen from the shore.
The paddle swimmer is moving much faster. This allows for on the water and a kind of relay. 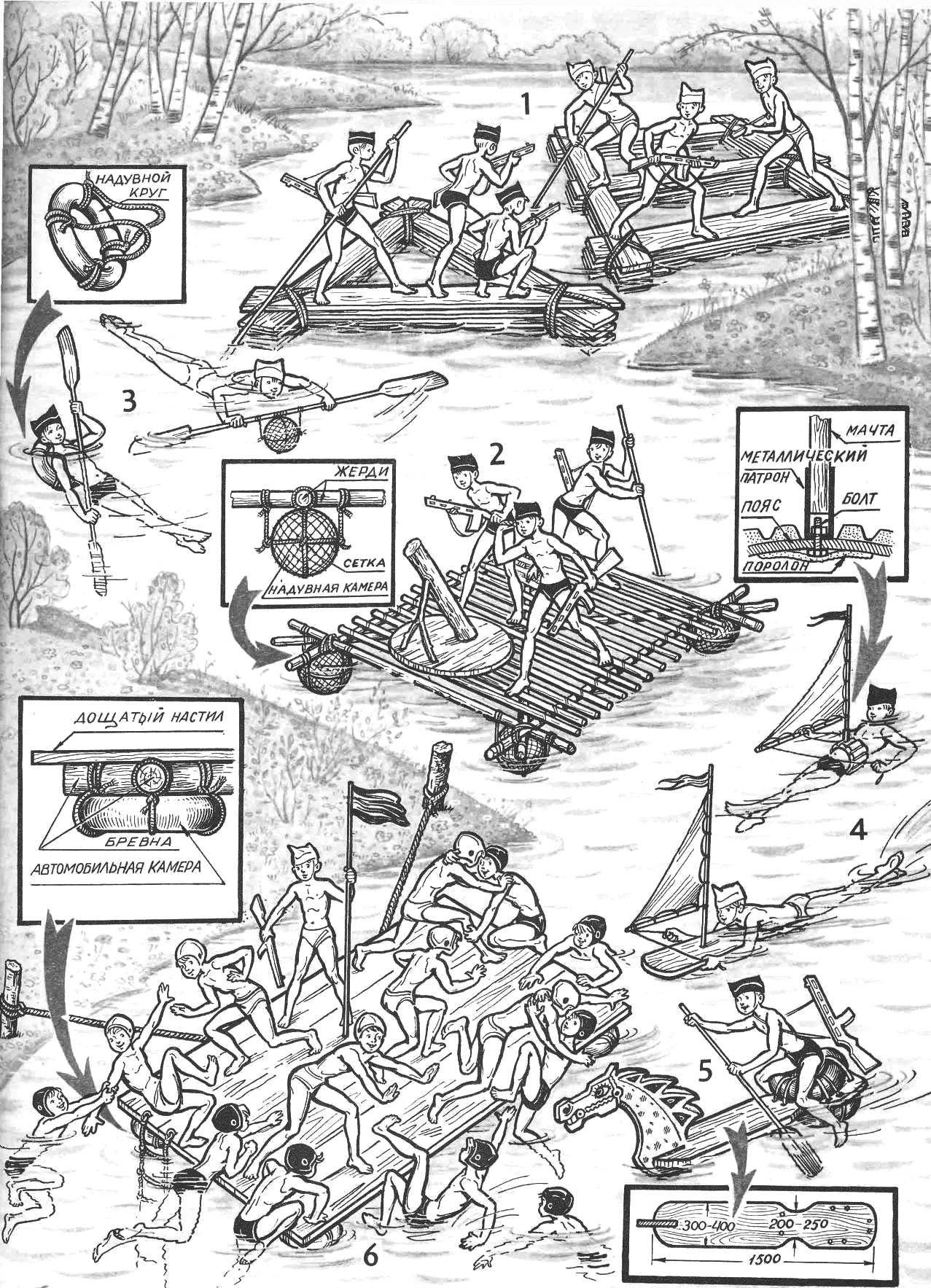 The simplest means for the crossing:
1, 2 rafts; 3 — two-bladed paddle; 4 — a belt and a Board with a sail; 5 — knight, 6 — assault on the floating fortress.
However, the splashes of the oars still attract the attention of “the enemy”. But such an arrangement would be the most “quiet” belt… sail. It can be a life preserver, it is only necessary to strengthen the stand for the mast of the sail. Here the swimmer lies on the back, making it less noticeable. When you change the direction of the wind, the sail removed, along with the stand and the motion carried with his feet.
It is possible to strengthen the sail on the Board and sail, holding on.
STORM
War games on the water are more interesting if they are related fights. For such games best fortress on the water. This is a wooden Playground in the shape of a circle or rectangle, which is fixed and held by means of a cable, chain or one or two anchors. With one or more sides of the platform may have the steps or better yet, rope ladders, the so-called stormtrap.
Depending on the size of the “garrison” round pad may have a diameter of up to 3 m, and the dimensions of the rectangular 2. 5X3 m, then the fortress will be able to accommodate 10-12 advocates.
Defending the fortress wear caps or caps of the same color, and storming it with another. The aim is to relieve the fortress as many of its defenders into the water. Who will be in the water, swims to shore.
The task of the defender is to prevent the invasion of the fortress. If someone from the Marines will be able to penetrate the fortress and lower the flag, the game ends: all remaining defenders are declared prisoners.
The point of the game is shown in the figure. If the flag failed to pull at the appointed time, the teams switch roles, and then the winners are those, who long held the fortress and less lost its defenders.
Of course, all children should be able to swim well, and the game must place in a closed reservoir.
S. GLASER