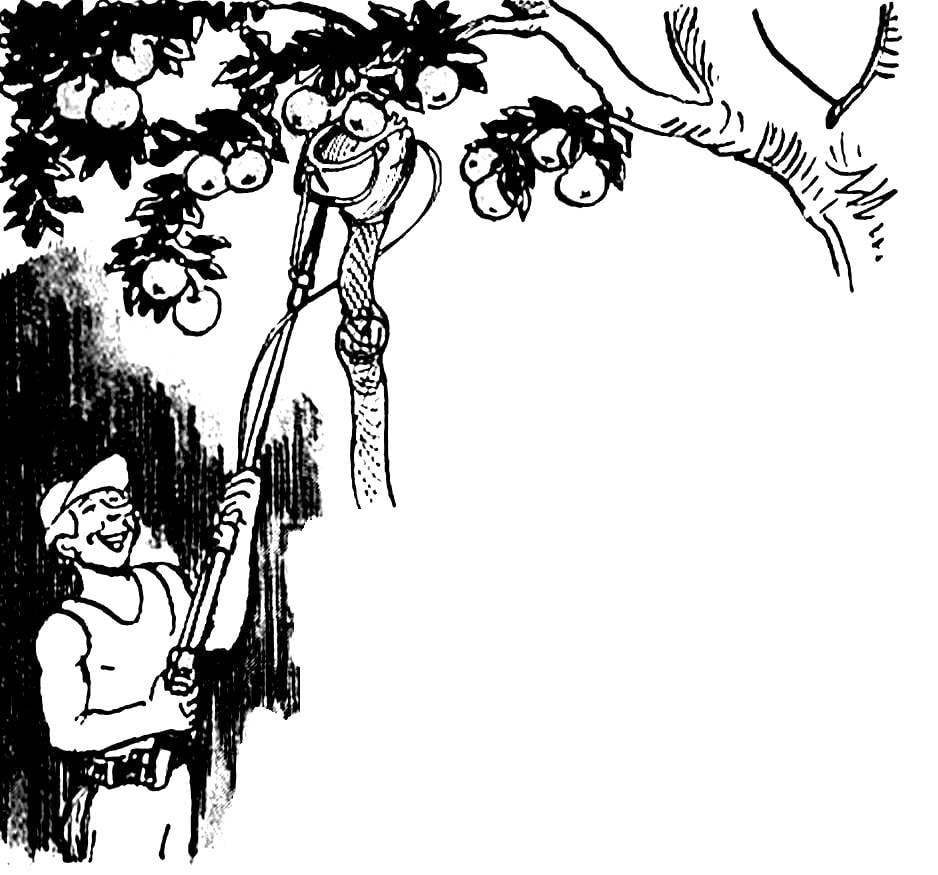 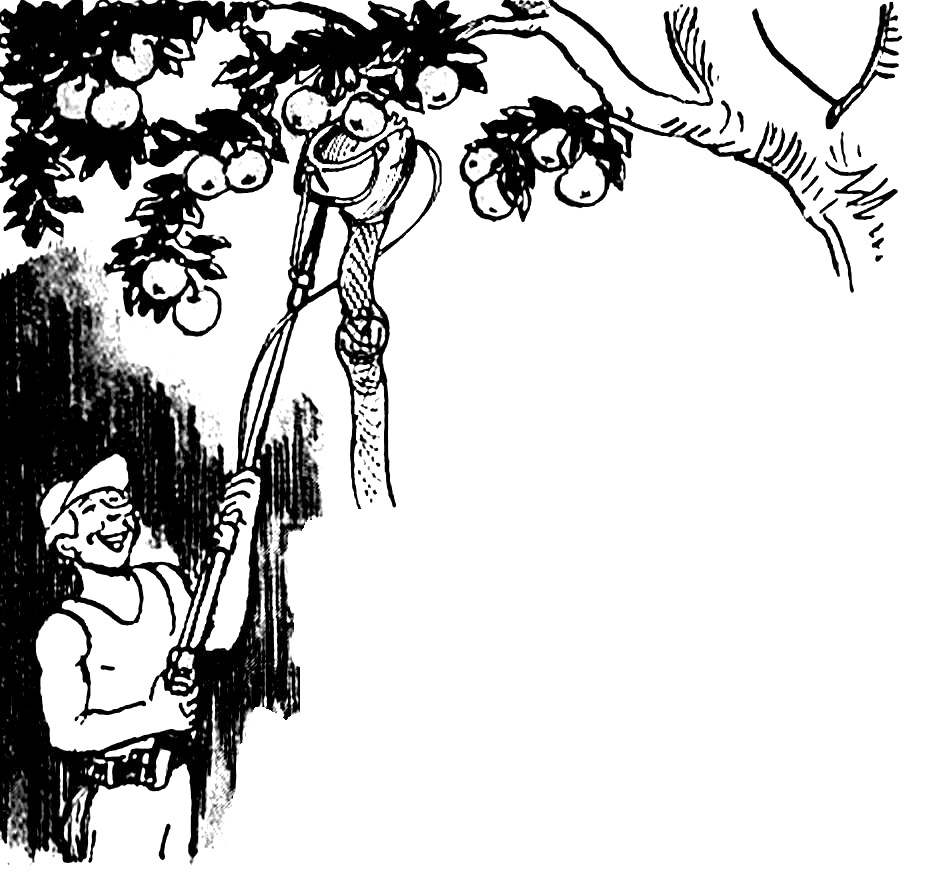 As practice shows, to grow crops — not all. It is much harder to remove, and then save it. Fully all that relates to the collection of apples, pears, peaches and other large fruit. Are in the sale, however, devices for removal of these fruits, but it seems to me, good is not among them. First of all, all of them heavy. Try a whole day to hold a heavy pole in the raised hands, lowering it periodically with two or three apples (or even every!) on the ground, and again raising up harvest collecting device. Most of these devices besides injure the fruit, and this means that to keep them would be impossible. A lack of cutting-off mechanism leads in most cases to damage of the branches of the crown.
I was able to develop harvest collecting device, which is largely devoid of all these shortcomings. It is simple in design, equipped with a cutting mechanism, lightweight and, perhaps most importantly, is fitted with a device that allows you to gently lower each fruit directly from the crown in your hands without damaging it.
Harvest collecting device consists of a pivotally mounted on the rod of a frame with fixed thereto a cutting mechanism and a trap — a cloth bag with a hole in the lower part. Docked to the hole (sewn) a flexible sleeve, a kind of plodprasop providing gentle fruit “soft landing”.
Frame photosjessica is bent from a thin-walled steel pipe outer diameter of about 12 mm and a wall thickness of 1 mm. Cutting mechanism is a kind of mnogozalny scissors driven by a motor arm type (for example, handbrake or clutch) in the form of a flexible cable in budenovskoy shell. 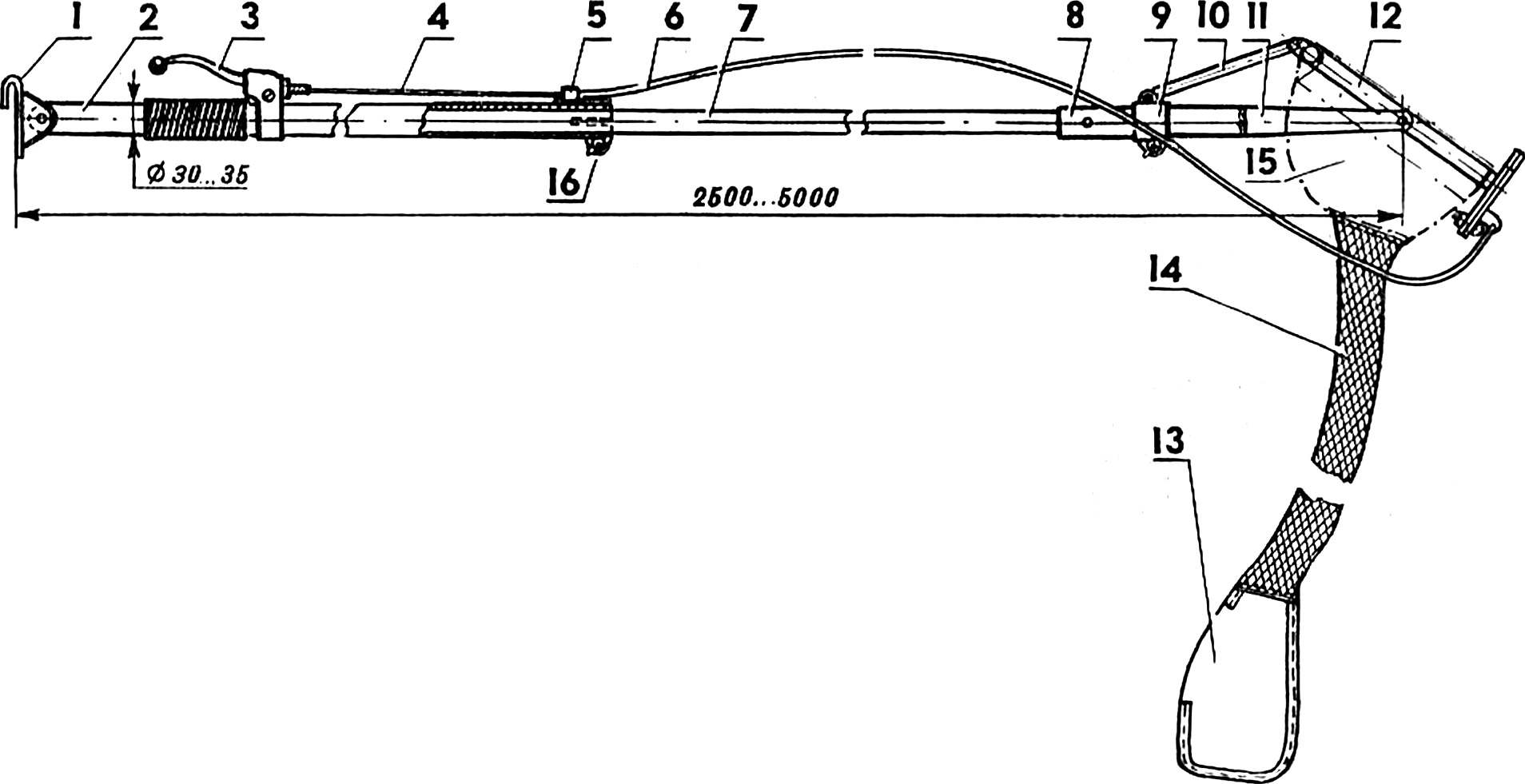 Universal harvest collecting device with cutting mechanism and the conveying sleeve:
1 — hinge with hook for fixing photosjessica belt collector, 2 — the hollow part of the rod (dural tube Ø 30…35 mm), 3 — lever shear mechanism (from any motorcycle or moped), 4 — wire shear mechanism, 5 — stop, 6 — sheath cable, 7 — wood piece rod, 8 — base plug (steel tube Ø 30…35 mm), 9 — clamp, 10 — rod, 11 — fork (steel strip cross-section 2 X 30…35 mm) 12 frame with a cutting mechanism, 13 — a-bag drive, 14 — sleeve 15 — the bag-trap, 16 — clip-clip.
The cutting mechanism consists of two plates — a fixed, welded to the frame, and a movable, hinged on the first. On the one and the other one has teeth-grips, a kind of comb. If you move the movable plate relative to the stationary sector, the petiole or branch caught between the teeth will be cut. To this process took place with minimal effort, the teeth of the cutting mechanism needs to be sharpened approximately the same angles of taper, like garden shears or secateurs.
As mentioned, the frame with a cutting mechanism is mounted on the rod swivel is necessary in order to set the cutter bar and a bag trap at the optimum angle relative to the cut fruit. Changing the angle is done using thrust: one end pivotally connected to the frame and the other clamp, which can move along the rod and locked in any intermediate position by a screw and wing nut. 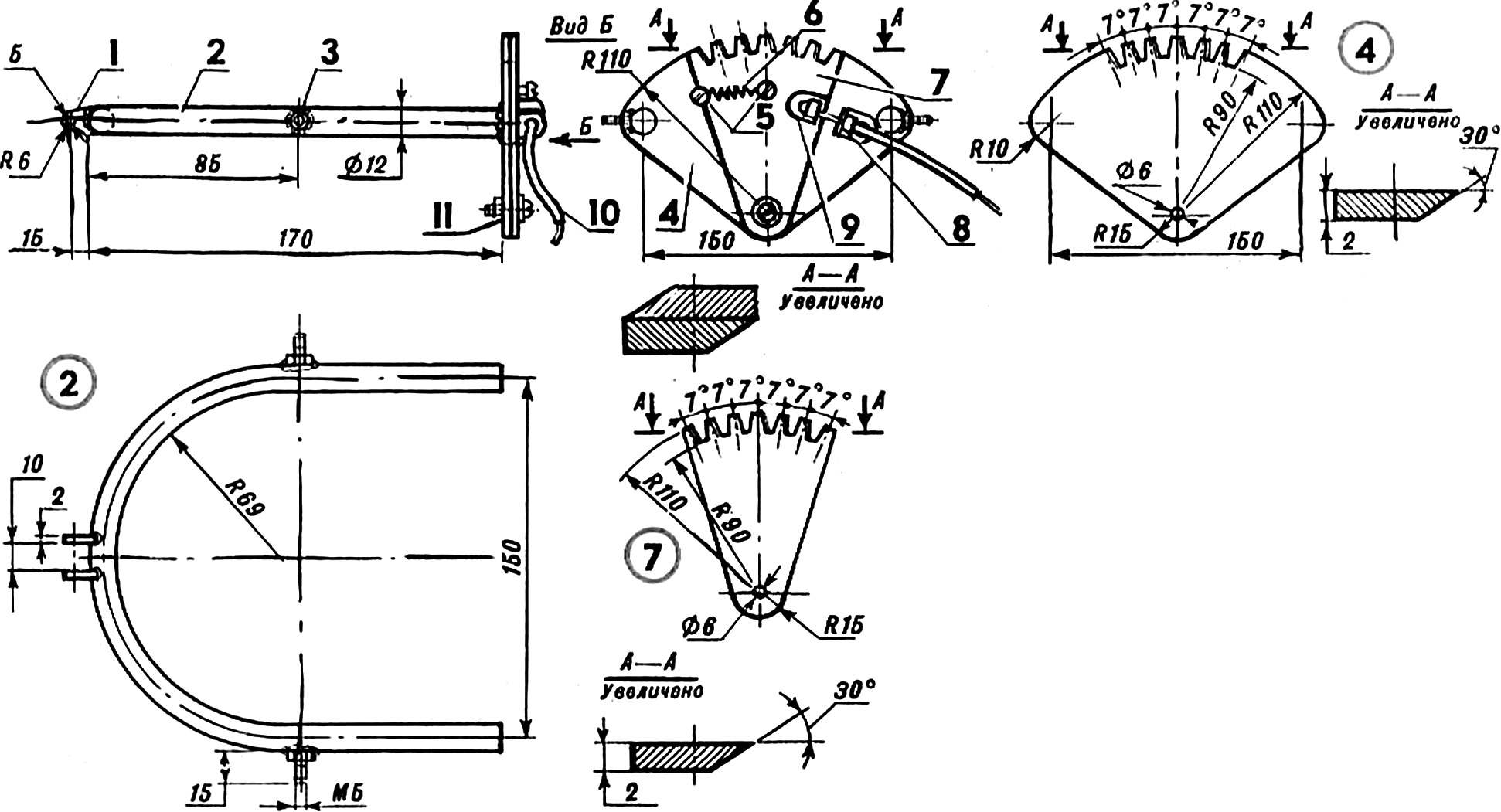 Frame with a cutting mechanism:
1 — fork-joint, 2 — frame (tube Ø 12 mm), 3 — hinge mounting frame (bolts with thread M5), 4 — stationary sector, 5 — screws with M4 thread, 6 — return spring, 7 — movable sector 8 — stressing sheath, 9 — emphasis in the cable 10, the cable within the sheath 11, the hinge of the movable sector (screw M6 with nut and washer).
The drive of the movable gear sector relative to the stationary comb is carried out by means of a cable in budenovskoy shell. For this sector, and a comb provided by the lugs with holes, as shown on the drawings where you enter the stopper of the cable and its sheath.
Rod telescopic photosjessica; it consists of thin-walled dural tube (diameter 30…35 mm) and a wooden extendable parts. Fixing “telescope” (knee length rods relative to each other) — with steel yoke, mounted on the cut end of the tubular part of the rod.
End rod end is provided with a hinge and a hook by which the rod can be fixed to the belt collector. I must say that this simple device greatly facilitates use of the tool allows for a long time to work with him without overloading his hands.
To ensure the usability of podolyanka and “delivery” of the fruit undamaged, harvest collecting device equipped with a fabric sleeve, the inlet of which is connected to the hole in the trap, and output — with small bag storage.
Use photosjessica not too difficult. First, we need to push to “telescope” to a comfortable working length and lock the rod with the wingnut. Next, set at the optimum angle relative to the rod frame with the shear mechanism. Then the bottom rod is fixed on the waist belt, the frame is moved to the selected fetus. Clicking on the handle of cutting-off mechanism to separate the fruit from the branches. The Apple or pear gently falls into the bag-trap, then goes to the outlet, and then in a soft sleeve, which gently descends in a bag drive. It only remains, thrusting his hand into the valve, remove the fruit from the bag and put it in a box or basket.
Z. SOROKINA, mechanical engineer