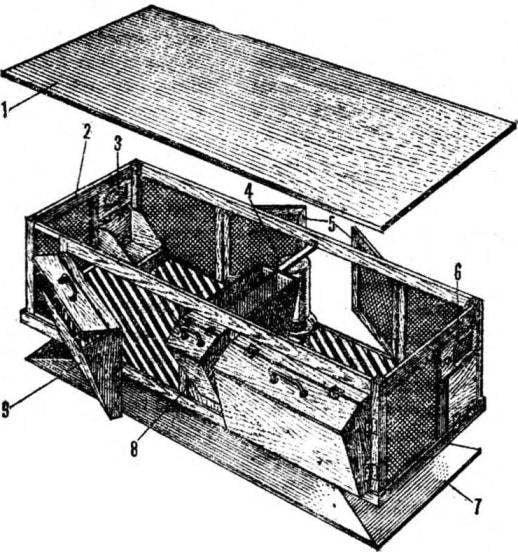 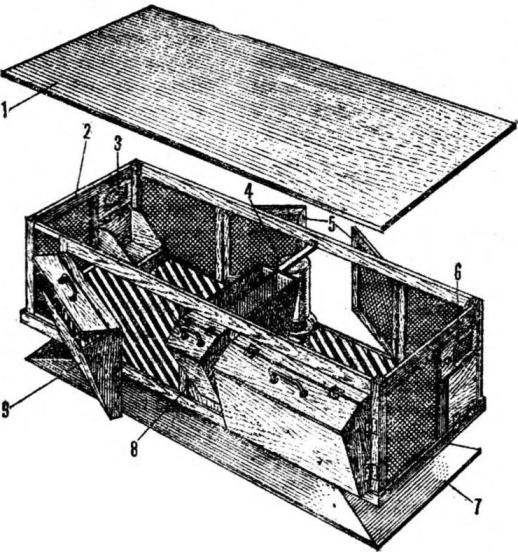 We offer mini-farm is designed for breeding and keeping rabbits of all breeds both private and public farms. It is based on a two-cell module (if necessary, they may be few, Solitary common roof). Device farm and maintenance regime designed that allow you to use it even the breeders and Amateurs, who can take care of animals only once a week on weekends. With this periodicity are filled genome, roots or feed trough; no more and construye appliances with water heating. Slatted floor cages with funnel-shaped shafts pitched manure makes unnecessary constant under other conditions cleaning.
The cell design is simple, and the cost of its construction pay for itself in the first months of operation. You need only two sheets of fibreboard, two sheets of plywood three-layer, four beam 60X100 mm, 50 planks of the fence, 4 m2 of roofing material for pallets, nails and paint. In addition, the equipment will include two enamelled deep bowls (diameter of approximately 220 mm), four canisters (for example, five-liter plastic from the “Antifreeze”), tank-pits with a height of 300 mm, two kettle, FS-03 (household, submersible type) and step-down transformers IN 220X127 (four on 7-8 cells).
The design of each cell is calculated on a strict orientation to the cardinal points: blind wall covered with boxes of nursery and feeders turned to the North and blocking the animals from cold winds; roof of the North side hangs at 900 mm from the South to 600 mm in the West and East is flush with the exposed beams.
The cell consists of stand-frames, the lower and upper tiers. When installing structures in the open it is equipped with a roof from a roofing material, preferably transparent or translucent, at least just from the roofing material.
The upper tier is basically the option of jigging, it is used for rearing rabbits after the suckling period. The room is made of different floor space of cells: one of them stands for the dimensions of the frame. In her live males; however, if the number of females in the breeding prevails, the greater the cell give them. Half jigging layer separated by kombikormovy running on two sides, and the total centrovoy drinker. In addition, each compartment has a hinged trough for roots, as well as a nursery for grass and hay, performed as opening the door; is the door to avtopoilki. Floor layer horizontal recruited from wooden slats, positioned under 45°, so that the rabbits will not hurt the clutches. Walls and doors (except North) lattice.
The same elements are located below the uterine layer of the two — cluster and wigelekeko— offices. The first is a removable part of the floor located lower than the remaining surface layer: here before the kindling is placed in the liquor; the rabbit will go to him, in obedience to burrowing instinct. The rest of the female office stationary, provided with a wall with a hole, overlapping if necessary latch. The door to the nesting compartment has loops on the bottom, with the opening (folding) doors formed a platform.
Uygulama Department, too, with slatted floors, but with the opposite arrangement of the slats, perpendicular to the stack direction of the upper tier, which, incidentally, achieved greater rigidity of the whole structure. On-site parks located construa drinking bottle, swing out feeder roots and the bunkers kombikorma. The nursery door is also hung on the rack rear wall of the range. There is also a door for the installation of automatic drinking bowls.
In the floor of the paddock made the window under the tapered ends sloping mine fixed under the floor of the upper tier. Pitched mine of lower layer communicates with the hopper is equipped with a removable door and a container for collecting of manure. Inspection in the periodic cleaning of mines — through a special” door. They also give access to containers for recycling feed, flour, located under a sloping grids com-ukrmusic. 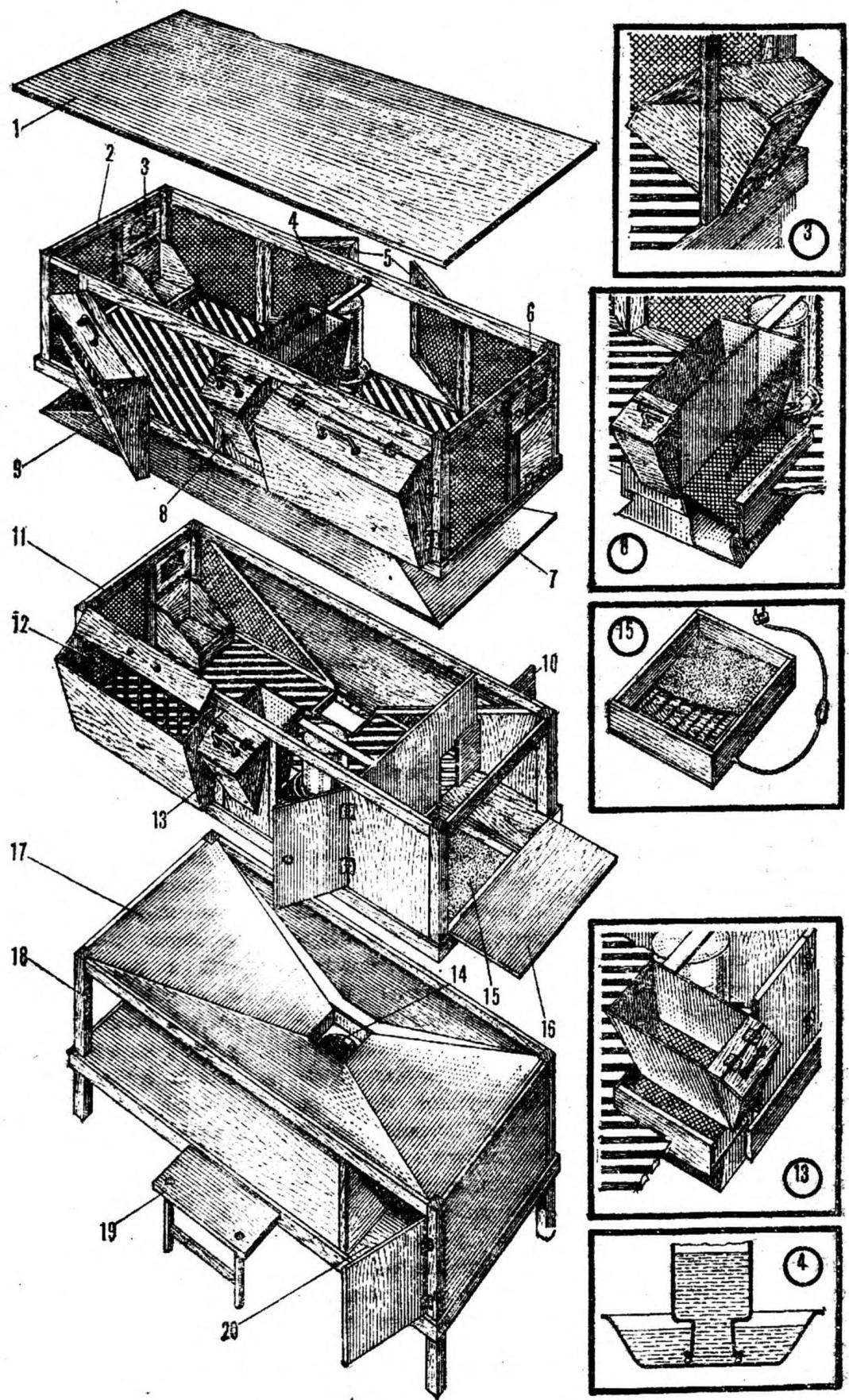 Bunk cage:
1 — roof. 2 — the frame of the upper tier, 3 — root feeder jigging compartment, 4 — bowl, 5 — door jigging compartment, 6 — door, root feeders, 7, 17 — pitched mine, 8, 13 — bunker kombikormov, 9 — a manger 10. the damper breeding Department, 11 — frame of lower layer, 12 — bars of the nursery, 14 — tank-pits, 15 — liquor 16 — the door of the liquor, the 18 — frame stand, 19 — folding bench, 20 — tool box.
In the lower part of the frame of the cell is a compartment of electrical equipment, which can also be used as a lockable room for jigging rabbits or valuable tool. Nearby there is a shelf for auxiliary devices for the care of the cell; middle is a folding stand-stool drink stand on when working with top tier or use it for recreation.
For the convenience of the loading of the feeders they made protruding or flip-out. So, root feeders are opened by turning the PA itself and held in this position the upper door, behind which you can fully rotate the feeder and turn it into a table.
Feed shki consist of a body with Windows for the nutrition of rabbits and pan. The latter is a fine mesh, permeable “flour PA retractable container for subsequent disposal.
The folding elements of the cells are supplied with handles, hinges, latches, and if necessary, and deadbolt locks. The side and front walls of the cell are tightened fine mesh, and the working side of the nursery coarse.
In the same cell simultaneously contains up to 25 animals at the lower level — with the new rabbit breeding, in the upper previous offspring. When the content of the ten females, eight cells (two cells are uterine upper tier, one — tier males) achieved a daily output of one rabbit weighing 4.5 kg.
For mini-farm does not require a large space: one cell is only 1.4 m2; double-row mini-shed of the eight cells, with between 70 cm (legs) and a passage to 110 cm — surface area less than 25 m2.
The experience and practice of operation for several years, bunk cell at the experimental farm showed not only profitability, but also high profitability of use in Amateur rabbit described design protected by the copyright certificate № 782773 with a priority of 20 November 1978.
I. MIKHAILOV, inventor