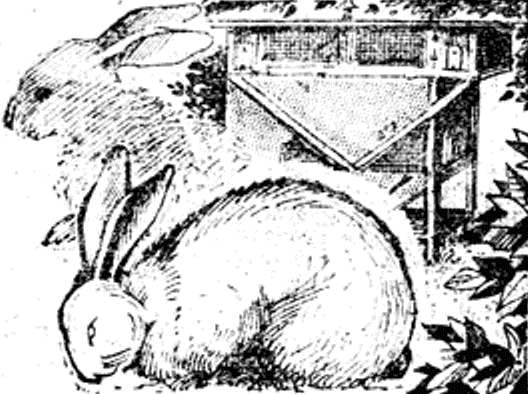 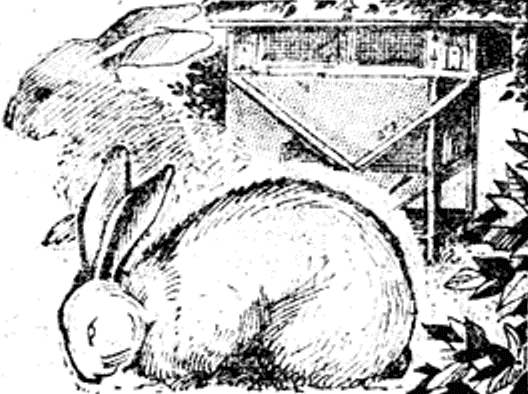 “In the journal “modelist-Konstruktor” No. 5 in 1983 we were interested rabbit mini farm inventor I. N. Mikhailov: immediately appreciated the amenities which are incorporated in this design. I would like to have more detailed drawings with explanations” (I. Rudenko, S. Chipenko Kokchetav region). “Seeing the description of the cell, realized that to work much better. I live in a small Fir on Sakhalin and want me to have a lot of rabbits: we turn them over to the state” (E. Hins, the pupil of 8-th class). “Bunk cage — the original and for the breeders lovers of our regional companies. It will attract new comers to participate personally in the fulfillment of Food program” (A. Pletnev, S. El’tsovka, the Altai territory).
Carrying out the wishes of readers, we return today to this subject.
The world is full of books on rabbit breeding, many instructions, guides, more scientific works, there are many descriptions of the experience of practitioners. But it is curious that the conclusions and recommendations of them on many issues controversial or not final. Oddly enough, rabbits are still little studied animals. And one of the many misconceptions when they are breeding — simplified approach to the creation of habitat conditions.
Take, cells. In most cases, especially in Amateur practice, is just a box somewhere in the corner of the barn. Its function is often reduced to one — to give a four-legged run. Meanwhile, in case of rational approach, the cell must be a high-performance unit for their intensive cultivation, intended for the use of the most effective ways of breeding rabbits. The conditions of detention of animals it should provide normal or slightly higher fertility; without any additional equipment or fattening cages — feeding to implementation (weight 4-5 kg) of each of 10 rabbits from breeding, accommodation at the same time two of kindling of different ages and one of kalikamata.
Cell should be — and automatically! to be cleansed, then it will not be a source of odors and a breeding ground for flies. It should according to the principle of samotorac without human intervention to ensure the supply of the main feed during the week, or even two, as long as possible (but at least 4 days) watering the animals, and if the street is cool, and provide hot drinking water to the body temperature of the rabbit — this alone will allow you to save the feed. As well as a heated barn (not heated room!), will make it possible winter kindling and promote the survival and rapid growth of young rabbits. This should provide beneficial use of the instincts of an animal: to make, for example, the progress in nested branch, similar to the hole in the hole, place the cells at least slightly below the General floor level, and mesh and solid sections of walls positioned so that it was a place to hide from curious eyes. Need some of these cells, which will allow you to work with the kindling that is transparent to the uterus, inspect or separate any rabbit.

Fig. 2. Stand:
1 — frame, 2 — front wall 3 — shaft, 4 — bolt for hatch mine. 5 — shelf, 6 — slurry bunker. 7 — the valve of the hopper 8 strapontin, 9 — box.
Here’s a set of requirements were laid in the development of the author of the design, recognized by the invention and received copyright certificate № 782773, and became the basis of the experimental caliciuri in Nevskaya Dubrovka in the Leningrad region. This cage is suitable for breeding and care of rabbits of all breeds in both private and public farms, farms schools, farms, farms, rest houses, etc. the Design of it provides external support the animals in the shedau without walls, and consisting of two rows of cells under a common shed roof. Each cell occupies an area of only 1.4 m2. In its construction, does not require scarce materials or of skilled labor — it can be made in any woodworking shop, and also on their own. One cell need two sheets of plywood, two — meter hard and soft fiberboard, galvanized steel sheet metal roofing, roofing 8 m2, two bundles of fence, four rail, four boards, nails, Yes a coat of paint.
The cell is assembled from three separate parts: the base, the lower and upper tiers.
The stand has four major stands of timber, which are based on the same stand lower tier, and they, in turn, is the upper.
Horizontal frame stand also serves as a support for tool butt and a small booth under the electrical equipment (transformers, heaters) and strofantina — folding benches (for ease of service the upper tier). In front of the shelf is a rectangular hole connecting located below the sealed hopper and tank for excrement from coming here cone shaft. The last upholster with sheets of solid fibreboard or Lotery and cover the top of conventional roofing material or other stainless and water – and frost-resistant sheet material. The remaining parts of the stand — fiberboard, plywood, fence.
The lower tier rests on a stand with four uprights connected at the bottom of the power boards section 20 X 100 mm, on which is laid the slats of the floor layer. Basic, backyard, insulated compartment delimited by the partition (coverage hole) with female office employees at the same time also a refuge for rabbits and a convenient trap when inspecting or usadke.
In first office floor is solid, is located 9 cm below the General level of grating layer. The outer wall of the nesting compartment is also insulated. Opening (Western) part serves as both the outer door and shelf-table for kindling. It is a solid panel detail hinged to a horizontal bottom hinged and equipped with a lock for fixing in position.
The ceiling of the nesting compartment, as the backyard forms the overlying mine-heat in the upper layer. A manhole in nested branch overlaps the damper-the damper that is inserted from outside the cage, with its front (South) side. When installed in the nesting compartment of the drawer of liquor between it and the rear wall of the niche. So the rabbits weren’t in it, she covered shelf with a width of the sidewall of the bar-racks.
Free range office has a slatted floor of the fence, tapping on the power Board and rack frame kombikormov and dung of the window. The cross section of the rails — 20 X 45 mm. the Direction of their deck is not parallel and not perpendicular to the side walls, as in traditional construction, and at an angle of 45° (northeast to southwest). With this arrangement, the rabbits, usually lying parallel to the walls, jumping in a moment of fear, never will break legs. The width of the slits is 18-20 mm. For rodent protection Reiki upholstered bottom a metal strip, for example, from the container. 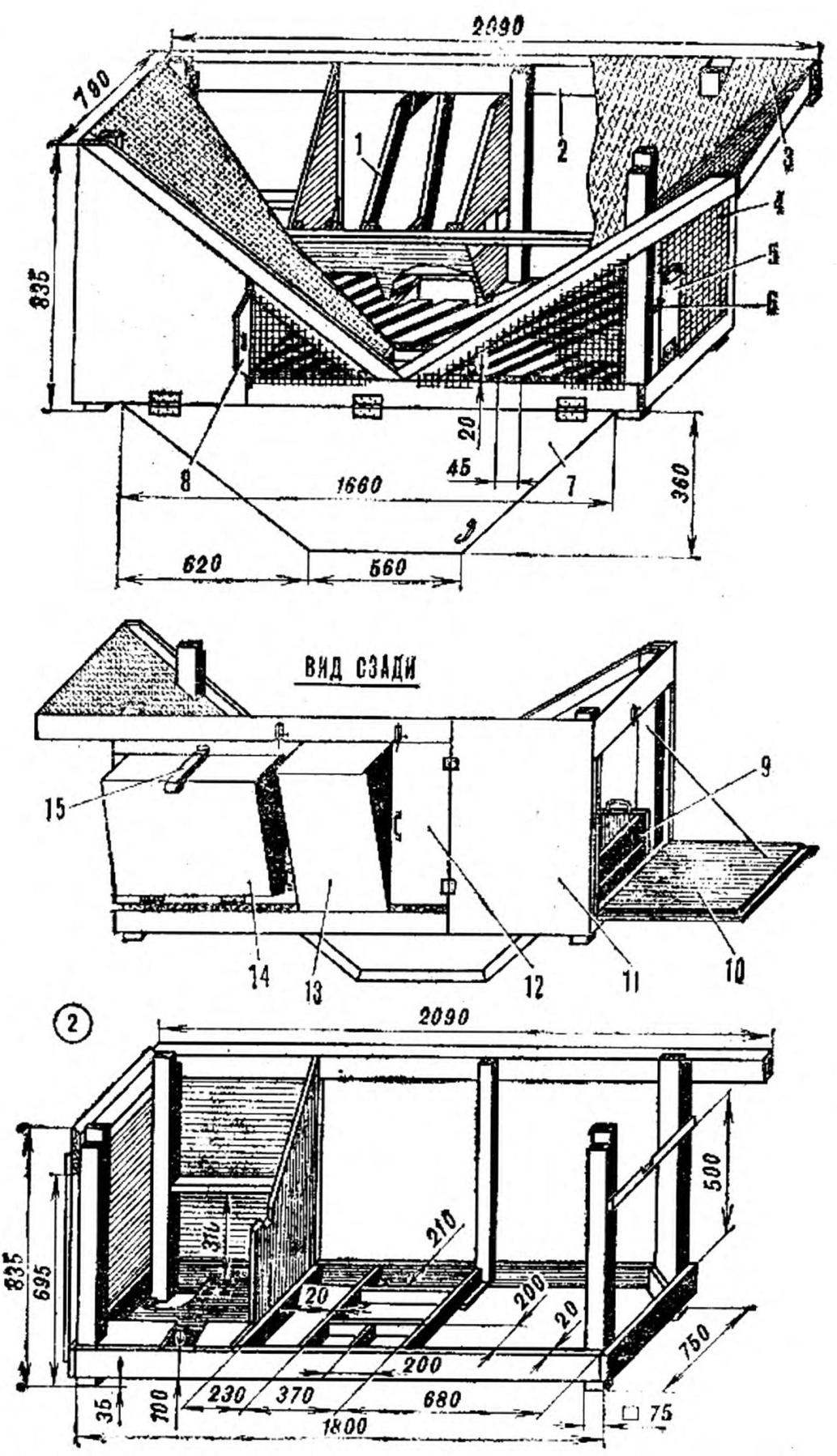 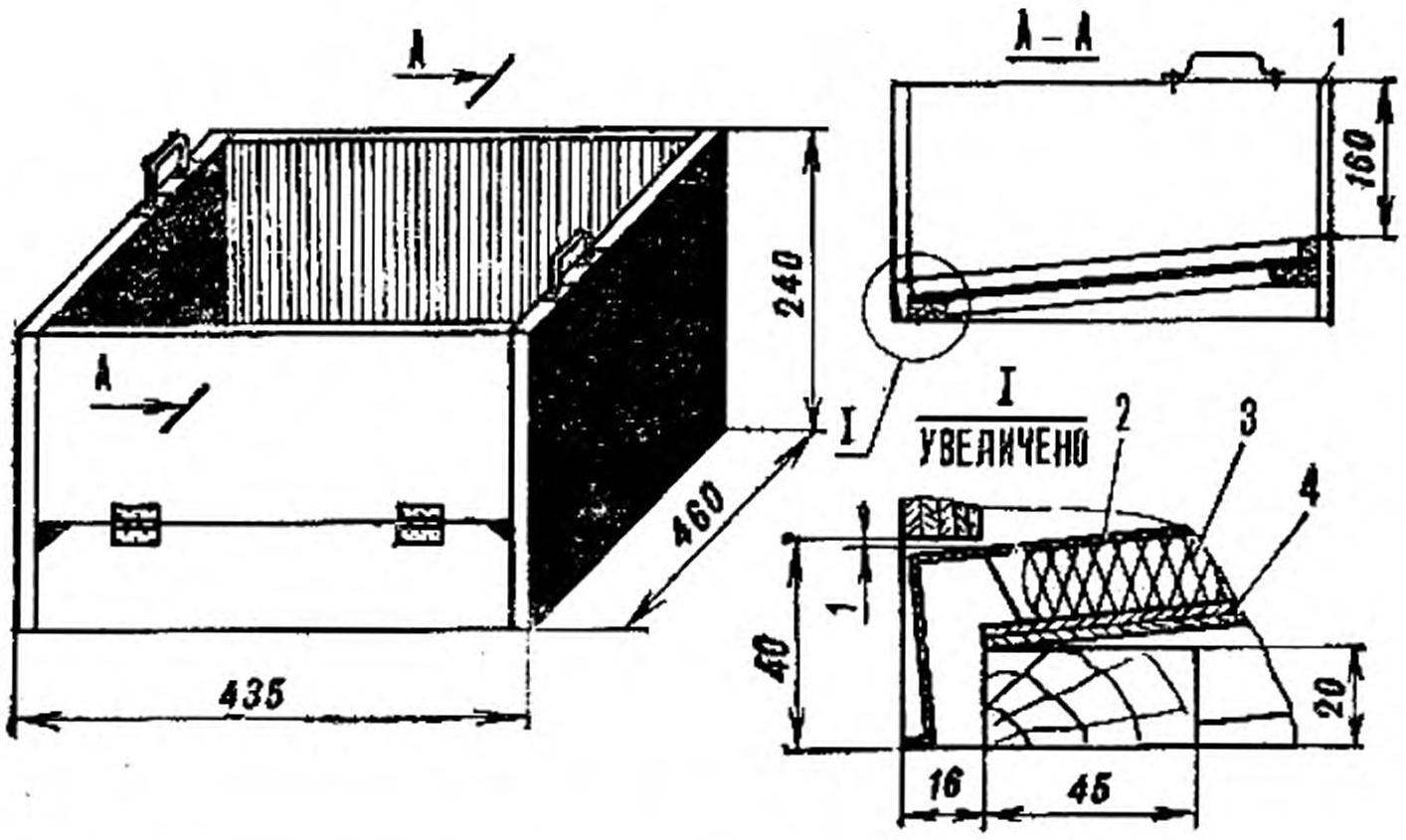 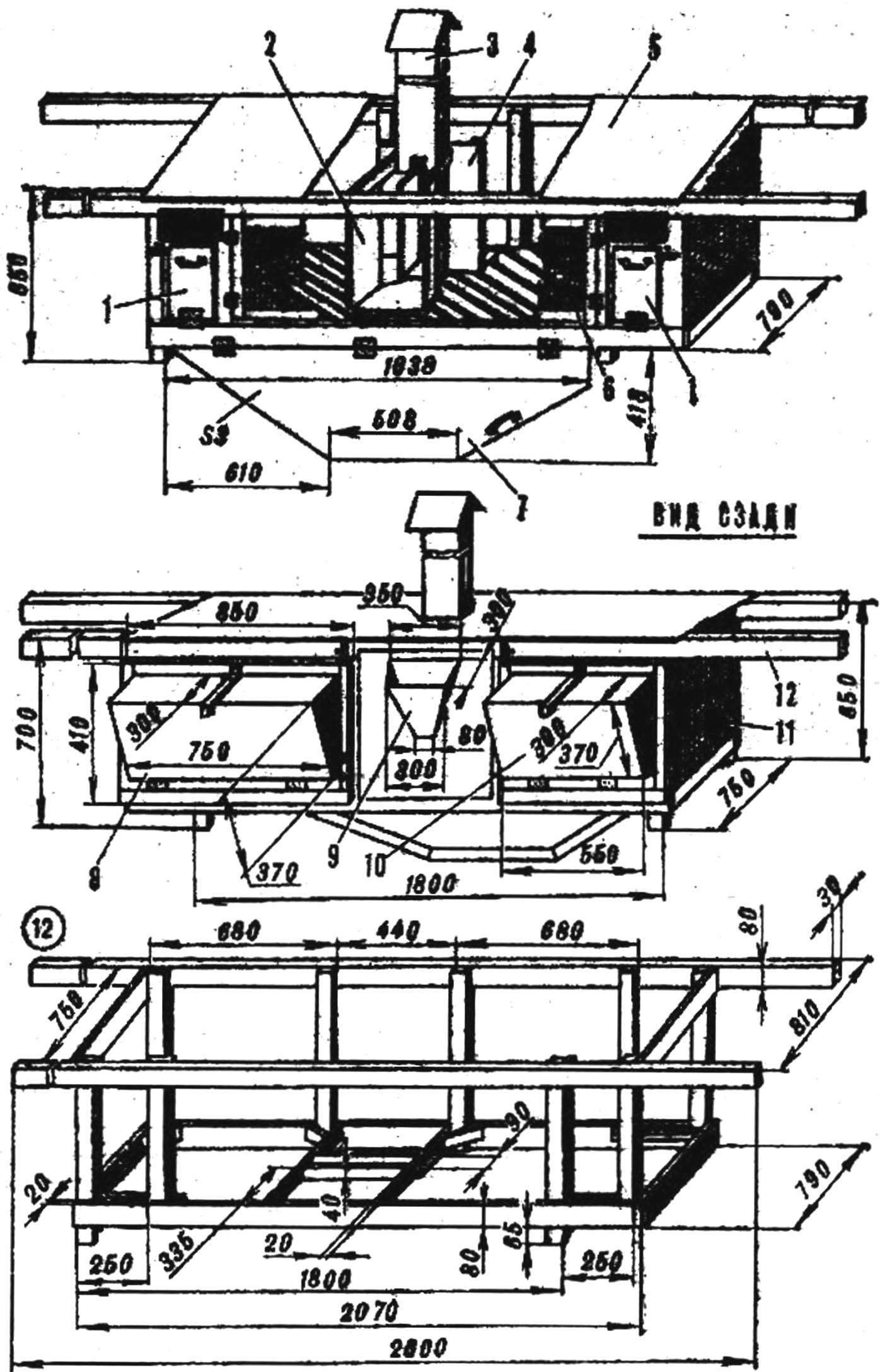 Fig. 5. Top tier:
1 — root feeder, 2 — stoic drinkers. 3 — vent pipe. 4 — wall kombikormov, 5 — cell roof, 6 — door, 7 — manhole shaft, 8, 10 — the doors-kindergarten, 9 — bunker kombikormov, 11 — mesh wall, 12 — the frame of the upper tier.
Each of the two sections of the upper tier has its feeder roots and their nursery-door, similar located below (the nursery-door one section more). The same can be said about the drinking bowl and kombikorma. Front (South) wall of our deck has two doors — with mesh, stretched over a frame.
Cage design designed for bisnorbiotin feeding and watering, in the end, as experience has shown, is much more economical, but only under the condition of intensive exploitation mini-farm. For males in such conditions require a large load of the playback, and females must constantly lactating to the 21st day following Sucralose; rabbits grow rapidly and are being implemented on a large meat and strong skins already in the 120-130 day from birth (in summer later) with a weight of 4-5 kg. the Device cells, as it forces animals to intensive development, and breeder — to get from the mini-farm the highest profit.
Of course, in a short article about the design just will not tell. But you can visit our experimental rabbit or email the address given here; despite the fact that such requests are many, will try to help with drawings (sent cod, price of set of 75 rubles), the consultations provided the opportunity to practically learn the experience directly on the farm.
I. MIKHAILOV, inventor, head of experimental rabbit “Nevskaya Dubrovka”