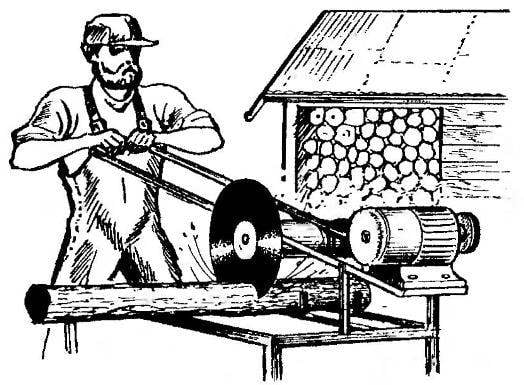 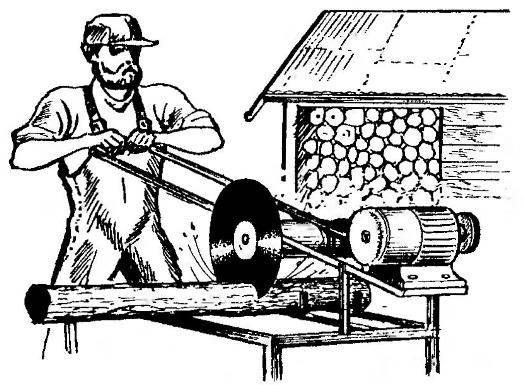 The proposed machine is designed primarily for disposal of dilapidated wooden buildings on the wood. Because of the many nails sticking out everywhere, this waste material can not afford a chainsaw “Friendship”, and therefore worth a few pennies. Cheapness, of course, attracts. Stops other: than and how to cut this here, bristling with “raviel” a conglomeration of old boards, beams, logs?
Rescued unpretentious disk saw with self-sharpening teeth.
It consists of two electromotive and mechanical components: frame-base (with a protective visor-handle) and the frame-pendulum with a saw blade. Simplicity — the key to reliability. For more than 20 years of quite intensive use (in wood, in the dissolution of wood needed after all, and many of my friends, acquaintances, neighbors) have compact electrofilica not having any breakage!
Those who decide to make yourself such a reliable machine, not without interest, apparently, features of this design. Steel saw blade is symmetric, that is, with runprofile cutting teeth, each of which is as close in form to equilateral triangle. The recommended length of the cutting edge — 20 mm.
When meeting with a nail at high speed saws such plastic deformation occurs in the tops of the teeth in a direction opposite to the direction of rotation of the disk. Acting over and over again, this deformation gives each tooth is shaped like a curved pointed beak. There is a kind of samstock, which is available after resetting (turning) of the saw blade. The folds are directed in the direction of rotation of the disk. So when sawing saturated with nails wood canvas you have to turn repeatedly. A similar pattern is observed for long time working with green oak, larch, logs from other hard rocks. 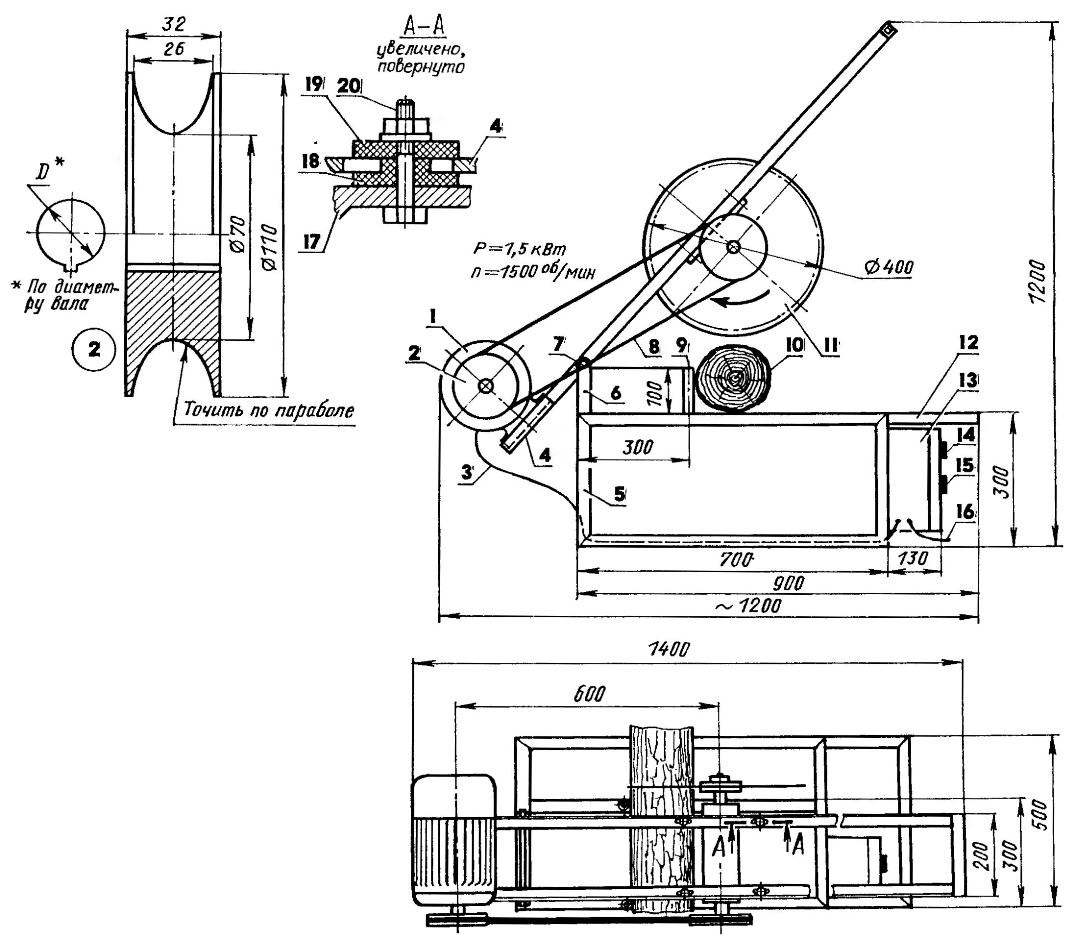 Disk of circular saw:
1 — motor; 2 — a pulley obnarujeny, parabolic (2 PCs); 3 — three-wire cable with reinforced insulation; 4 — the frame-the swingarm is welded (from the top view it is relatively horizontal); 5 — frame; 6 bracket (2 PCs); 7 — axis of the frame, pendulum (with washers and cotter pins on the ends); 8 — strap wedge; 9 — emphasis (2); 10 — beam; 11 – a disk saw with bearings; 12 pen-visor; 13 — control unit; 14 — STOP button; 15 — button START; 16 connections cable; 17 — paw bearing housing; 18 bushing-shock absorber; 19 — washer damping; 20 — bolt M10.
Like most of the “circular saw”, a saw blade of the considered machine is mounted on a driven shaft with two faceplates and a nut with left-hand thread. Torque it gets from the electric motor through Kino-belt transmission. The belt tension can be adjusted by moving the supports of the shaft along the frame-pendulum with subsequent fixation with bolts M10.
Streams of pulleys are machined on a lathe. Work profile of each is a parabola. As practice shows, the V-belt with these pulleys is no replacement more than 20 years, even in makeshift structures, where it is difficult to withstand the alignment.
Of course, under all sawing work should be used with caution. For protection starter boxes from bumps designed protective visor. He also performs the function of the handle when carrying the machine together. The free end of the frame-the pendulum is also done in the form of the handle.
A motor mounted on the frame of the pendulum, three-phase asynchronous. Having that on your passport, power of 1.5 kW and a rotation speed of 1600 rpm, it ensures the transmission to the saw blade torque, sufficient to dissolve, say, timber (at the same pulleys and do not secureme wedge belt) is almost stable at 1480 rpm.
My first saw was fed from single-phase domestic AC voltage of 220 V on the scheme, published in the journal “modelist-Konstruktor” No. 2, 1996. But then I had the opportunity to connect it to a three-phase network. Operational characteristics of the motor (and saw as a whole) has improved markedly.
In conclusion, a few words about the rest of the electrical equipment. Cables should be used highly reliable, double insulation. Special attention should be paid to the tightness of the box with starting equipment, protecting the latter from even the smallest of sawdust. We must not forget about the health terminal on the motor and measures to seal with elastic sealant places the cables pass through metallic parts of the structure. And, of course, strictly observe the rules of electrical safety, fire protection. The technique does not forgive carelessness.
V. RADKOV, Republic of Tatarstan