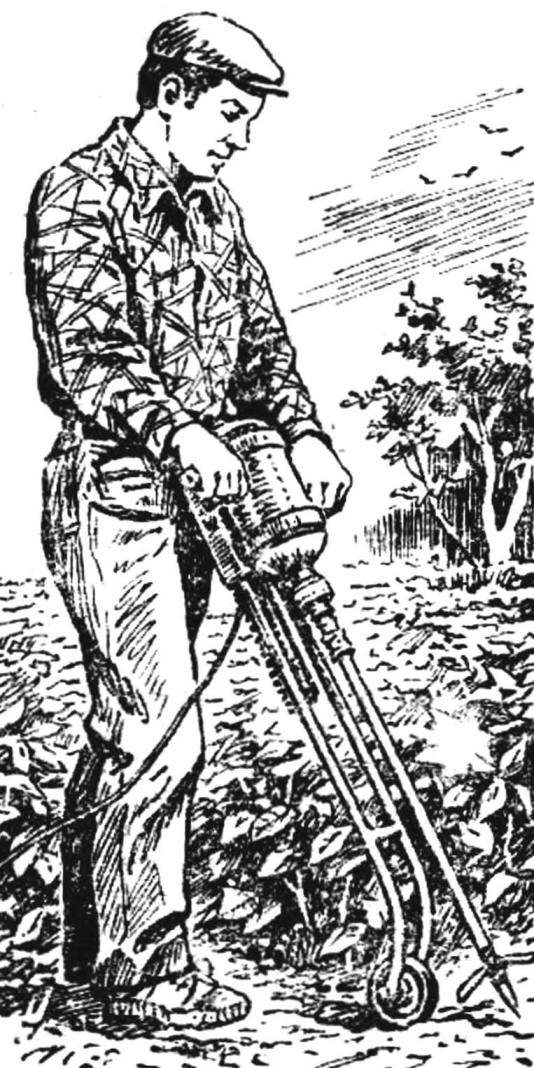 We have already talked about the agricultural arrangements, where the engine used electric mowers — rotary and shearers knife (see No. 9 of 1980, No. 2, 1981), plough on electric (see # 9 in 1981). Now offering new construction on the same basis — the cultivator of the soil. First, obviously, you need to explain why I designed the mechanism, the main purpose of which is plowing and this scheme — in the form of electrodyalisis. Why not go for more or less beaten path, taking up a walk-behind plow. First of all, it dictated the small size of the treated area and high density of planting tillers are simply not to turn around. Then had to take into account the weight of the guns and power, developing a medium amount of torque just 3 kg. With this machine will easily cope and teenager and woman, and elderly people.

Now, after a dozen years of operation Ripper, you can transfer a number of its advantages.-For example, were preparing the soil so that it does not require weeding at the same time, the upper fertile layer of the earth is not dug down, but remains on the surface. Guide cone deepens below the ploughing of inches, where he passes better hold moisture. You can work on steep slopes, in greenhouses and greenhouses, under fruit trees and around shrubs, the degree of soil moisture does not influence the quality of work. Entire growing period inter-row cultivation can be carried out without damaging the roots of the plants. And the last one. This weapon replaces the cultivator, a harrow, a mouldboard. The performance of the mechanism when the ploughing depth of 25 cm on the hard loamy soils 70—80m2/h.

Electrotechnical consists of a working body drive and chassis-frame with the thrust wheel. Drive-drill has two side handles. The clutch is of the cone facilitates the replacement of a support rod in the lower part of which is screwed a tip welded to it with knives. By the way, about the size of knives: for heavy soils them Ø 220 mm, when working on the lighter lands it can be increased.

The frame had to be done in order to keep the mechanism the weight of the engine mounted on its carriage. The latter is movable up and down along the guide frames, however, constantly kept compressed by a spring. Only when a farmer applies the amount of force pressing on the handle of the drill, she and her carriage goes down — knives, revolving, gradually deepening and the earth. With the weakening of efforts, the mechanism returns to its original position. In addition, the frame is equipped with hard wheel with a ratchet that prevents “rolling” of the Ripper in the time of work. 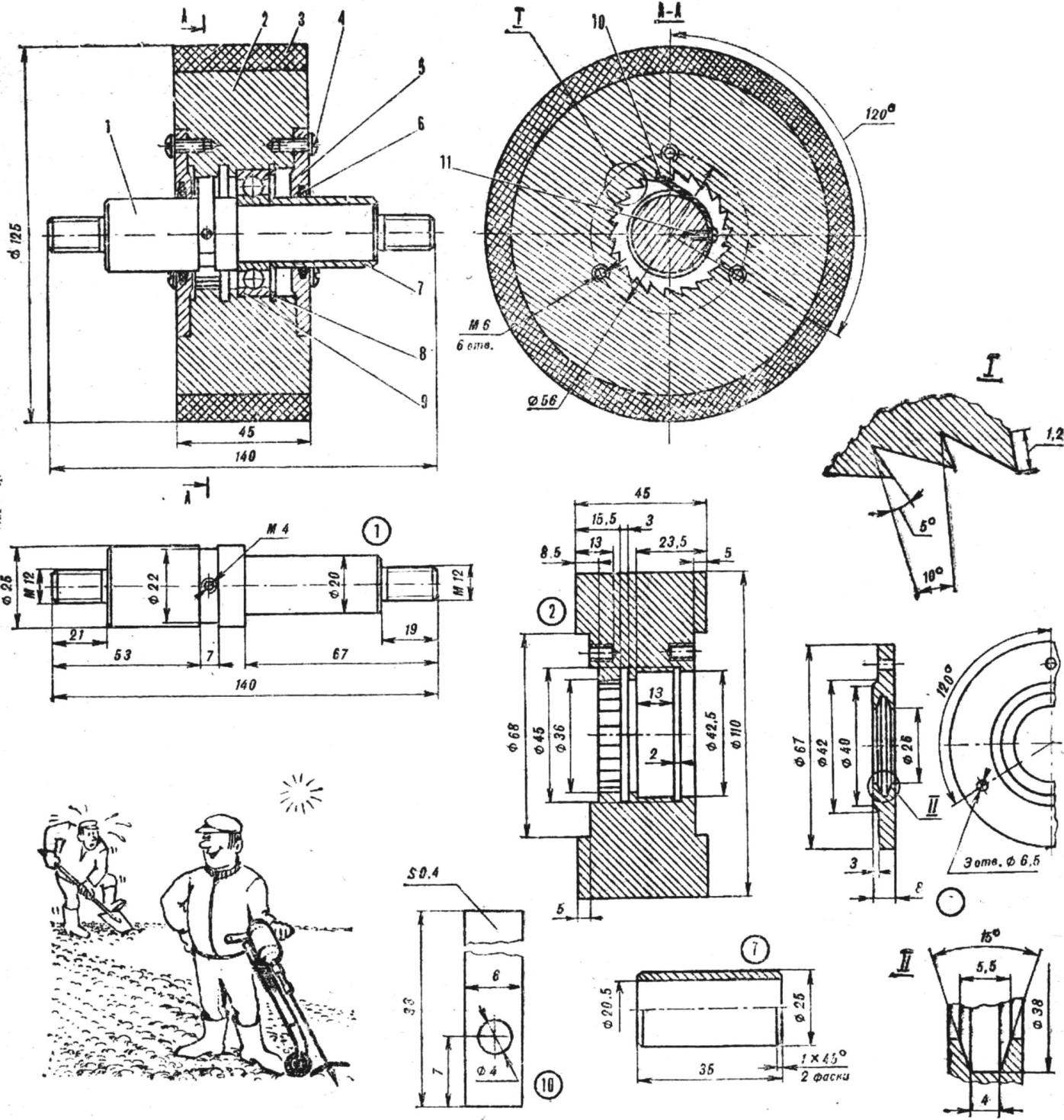 Resistant wheel:
1 — axis, 2 — disc, 3 — bandage 4 — screw М6Х13. 5 — cap, > — packing ring 7 — Bush, 8 — spring retainer 9 — bearing, 10 — spring, 11 — screw М4Х11.
Briefly about the main nodes and details.
Carriage. It skids (pipe Ø 25.4 mm) slip on the rails of the frame. On the skids put the four transverse edges of the bed plates of the locks of the clamps by which the drill is mounted on a bed. In the center of the ribs there are openings under the rod spring. Connection all these parts welded.
Frame. Two tube-guides (Ø 15 mm) are connected at the top and in the middle part dome jumpers. When assembling between the upper stud and a rod end of the carriage is stretched return spring. Tapered bottom rails and welded to the axle axis of the wheel.
The clamp. Steel tape size 3X20X310 mm. At both its ends welded studs with M6 thread. When assembling the drill obkladyvaetsja ribbon, the studs are inserted in the corresponding holes of the plates of the bed and are fastened with nuts.
Resistant wheel. His disc thickness 45 mm has a complex configuration of the axial hole (part of its inner surface — the strip on the rim — made gear under the ratchet). Posted here: bearing Ø 42 mm, closed on the right side of a standard spring ring-retainer, two side cover screws М6Х13 with alenikovym rings made of felt and shaped axle. It is attached a leaf spring ratchet. Also, worn thrust bushing. The disk is glued to the bandage of sheet rubber.
A. GLAZKOV, g. Tosno, Leningrad region