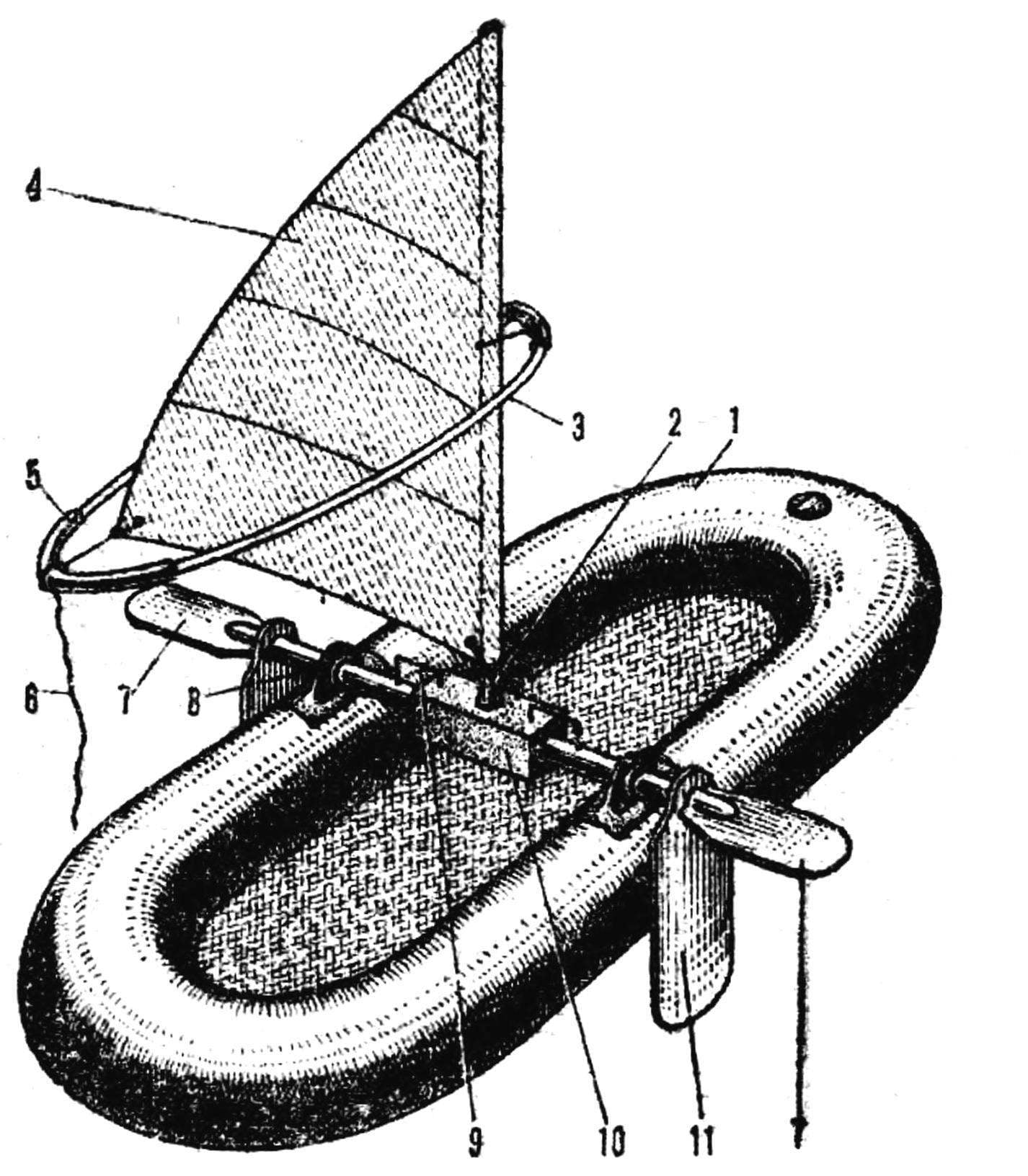 With all its advantages of an inflatable boat of any design has the same General disadvantages: Shorty wislica, turtle speed and bad handling. From all of them at once we managed to get rid of, adapting your boat “Dive-4” under sail: with him she became and the faster and more manageable. And actually upgrading was quite simple and compact, that is blended with the amenities characteristic of inflatable boats.
To equip the Circus used a triangular sail from a windsurfer with mast and boom, but with some modifications. Square sails — about three square meters — quite enough to ensure good progress, at the same time maintained the necessary stability of the boats on the water. Panel cut out drawings but recommended for windsurfer.
The mast is a composite of two duralumin tubes with a diameter of 30 mm and a wall thickness of 5 mm; length of mast 2.3 m.
The greatest transformation is subjected to the boom of the windsurfer. He’s going from curved bamboo poles with a length of 1.5 m or bond pairs of aluminum tubes Ø 25 mm and a wall thickness of 3 mm. They form the two halves of the boom, connected two lengths of thick-walled rubber hose, bent in half and pulled simultaneously on both ends of the arcs of geek. This design is simple and reliable in operation.
The mast and boom if it is made of duralumin pipes, flooding have on the ends of the foam tube stub.
To stabilize the movement of a boat under sail, it will take another two side shvartza. They can be made of sheet aluminum of suitable thickness (or ribs), and also from thick plywood. Additional parts are installed on both sides of the boat directly on the blades of oars, which in swarzak have corresponding holes. And the paddles are joined by a wooden (or aluminum) of the steps with the holes under the handles of the oars, as well as the vertical pit floor mast: so it is a Central mounting hub. 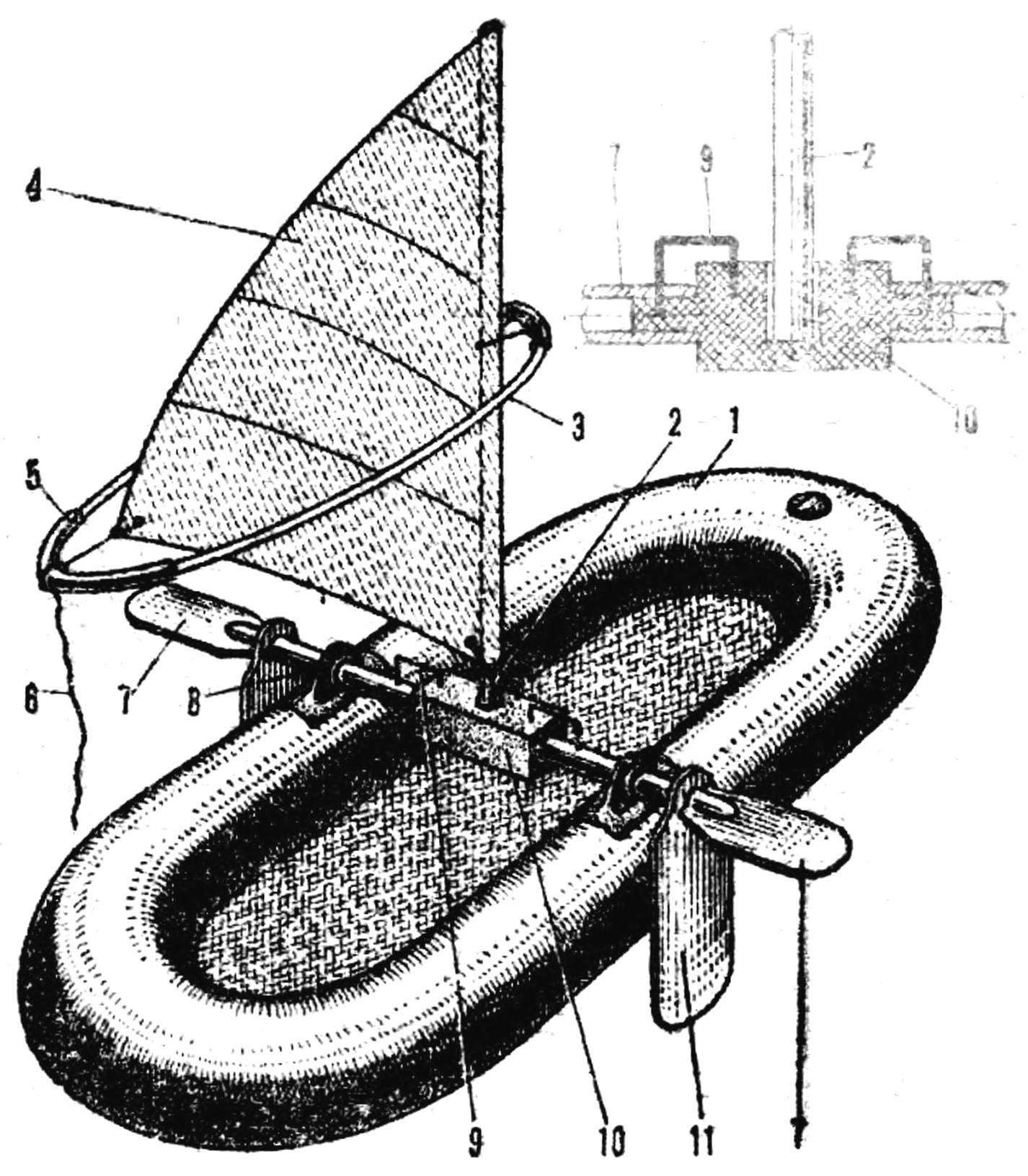 And inflatable and sailing:
1 rubber boat, 2 — mast, 3 — boom, 4 — sail 5 — hose — connector boom 6 — boom-sheet, 7 — paddle, 8 — rubber oarlocks, 9 — a connecting bracket (D16, Ø 7 mm), 10 — steps, 11 — swiercz.
The entire Assembly may be made directly to the boat. Oars is taken from the vane parts; additional parts are hung on them. their slots come in the expanding part of the blades of the oars; paddles handles are inserted through the rubber oarlocks of the boat to the steps and fixed wing bolts. Then assembled the mast and the boom; the end of the mast is set in steps. The whole structure is obtained simultaneously rigid and flexible: the longitudinal offset neytralizuya focusing svircev in Boca boats, and the possible mast tilt forward or backward. However, she held with one hand, and the second for boom-mainsheet to keep the sail: it all resembles “work” on the windsurfer, but instead the position of “standing” — “sitting”. When you reject the mast is rotated sertrali — steps with oars, then respectively moved forward or backward the ends of the blades svircev. Holding the boom-sheet and deflecting the mast, we not only handle the power, but also displace the center of the sail relative to the center of lateral resistance — let’s turn this boat in the right direction. Decomposition of forces happens in such a way that the force required to hold the mast, slight; moreover, you can manage and together, dividing up the responsibilities.
All parts of equipment should be performed to meet the requirements of the flooding, because the Assembly, as we have said, can be performed afloat, however, and disassembly is also. Steps and fit additional parts in the bag supplied with boats, and the long boom and tube of the mast — in a special narrow case.
Of course, this design has its drawbacks. And first of all that while managing you need to keep in the hands of the boom-mainsheet and the mast. However, this inconvenience kompensiruet sports interest to management. You can not say about the entanglement across the Board frontal waves in the boat. However, it is also possible to find a solution, reducing the speed of or constructing on the nose of the boat a simple removable balneoclinic.
V. and G. БОРО3ДИНОВЫ