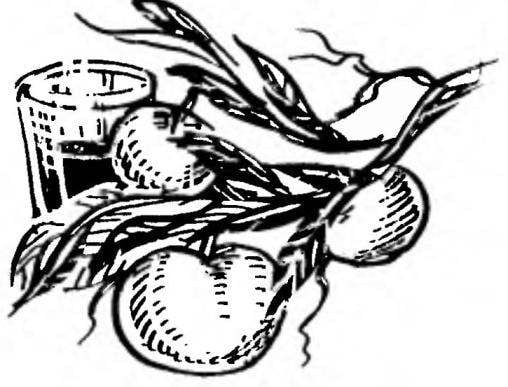 Installation for boiling water widespread. Including electrical, type “Titan”. Becoming the owner of one of these decommissioned boilers, decided the best original designs to create electrojuice extractor could not be found. Looked promising case “steel”: perfectly preserved, with tightly screwed-on cover and two interior cylinders.
In one of the cylinders, a glimpse of the future a hopper, and the other convenient “pedestal” for the perforated drum and the chipper (disc float) and rotate the motor installed bottom. For the flange mounting of the latter as best suited and disk support “Titan”. And the distance from it to the annular base, the limited existing racks could accommodate a motor.
First of all was finalized the case of a boiler. The inner cylinders are cropped in height, narrow to 155, and wide — up to 90 mm. in specifying the dimensions in the calculation accepted the fact that the gaps “grater — the bottom edge of the narrow cylinder and a drum upper edge of a wide cylinder” should be 2-3 mm., otherwise the proper operation of electrojuice extractor is not guaranteed.
The diameter of the outlet at the bottom of the shell increased to 40 mm to avoid clogging of the nozzle with the possible ingress of small amounts of pulp in the juice during operation of the juicer. Luke and scraper ejection of pulp placed directly on the lid. Their design is virtually indistinguishable from the factory made counterparts, and therefore not considered here. 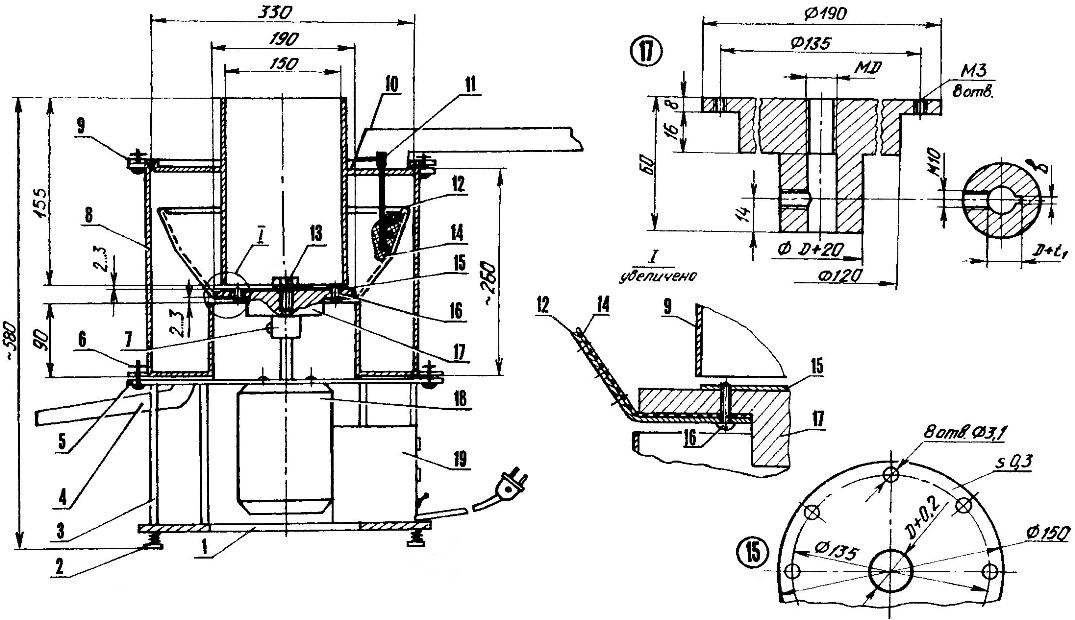 Juicer from a boiler of the type “Titan”:
1 — ring-base: 2 — leg-absorber (4 PCs); 3 — (6 PCs); 4 — pipe output (instead of faucet outlet); 5 support disk, modified; 6 — bolt flip (“autoclave”, 8); 7 — screw M10 lock; 8 — the case of “Titan” (with a shortened inner wide cylinder); 9 — a cover of “Titan” (with a short internal narrow cylinder-hopper); 10 -Luc ejection of the pulp; 11 -rotary scraper, 12 the drum is rotating, perforated (from a scrapped farm equipment); 13 — a bolt of fastening of a float; 14 mesh; 15-the grater disk replacement (radial “hammer” notch); 16 M3 screw(with a pointed end, a clamp float); 17 — a plate-the base of the float (from discarded agricultural machinery, with wheel hub and conventionally not shown key); 18 — electric motor asynchronous, three-phase (1 kW, 3000 rpm); 19 control unit (with starting and phase-shifting capacitors). Material of parts in contact in the process of working with the pulp and juice – the stainless steel; the dimensions D, b, t, – in accordance with the diameter of the motor shaft.
Grinder raw materials in homemade juicer can be any cutting device, abrasive disk type, including developments, published in the journal “modelist-Konstruktor” (see for example, № 11 — 12’98, 8’99). But, as practice has shown, best replacement float with radial notch, made 4-sided punch or hardened nail. Rigid fixation such a shredder on a plate-base (homemade or prepared, from the same farm) provides axial bolt with washer G Rover and slightly protruding pointed ends of the eight M3 screws.
During operation, juicers centrifugal force throws the resulting dispersed mixture on a perforated wall of the drum, provided with a liner of metal mesh. It separates the juice from the pulp.
Drum from a scrapped farm machinery, modified. The upper end zavalova inside on a lathe using rollers mounted instead of the cutter. The wall of the drum are perforated with a drill diameter of 4 mm. the Holes are spaced from each other at a distance of 10 mm. Mesh liner — from Provo-Loki-“steel”; bottom edge is sandwiched between the plate-base and the drum.
No matter how small the cells of the grid, but the pulp still gets through them in the juice. And although it is in any case quite suitable for human consumption, it is necessary to further purify and brighten. For example, passing through a fine sieve, which can serve as a nylon stocking, followed by settling and drain juice into a container for storage.
Finally — on the motor. For homemade juicer suitable 3-phase asynchronous electric motor with a power of about 1 kW and a rotor speed of 3000 rpm For single-phase domestic network it is connected according to the standard scheme with phase-shifting capacitors, more than once and quite in detail in the “Modeller-designer” (see, for example, publications in № 11’90, 12’92, 8’95 and 8’99).
A. PYSHECHKI, Kamyshin, Volgograd region