Nearly everyone who has undertaken a construction project, it was necessary to mix the solution and concrete. This work requires considerable physical effort, and therefore all, who as you can, trying to mechanize this type of work. But if their volume is quite large, the concrete mixer with good performance in this case – an indispensable thing!
That’s why 12 years ago I decided to collect itself such a “helper”. Just wanted, to the extent possible, to simplify the design and make it mobile! That is, that the mixer could be independently set to operate in the most convenient places, and to move from place to place and after work, take her to a secluded area of the lot or in the garage.
At first thought to make the main working body of the mixer of 200 litre metal drums. And then quite by the way a friend had suggested “pear” (mixer) from the old cement mixer with a volume of approximately 560 HP and had two wheels with hubs from agricultural machinery (model B19-S), formerly very popular “homebrew”. The engine was supposed to use an electric (mostly), but with the possibility of swapping it for a petrol. Approximately estimated on the power of the engines used in the same mixer, stopped at the 3-kilowatt, three-phase 1000 rpm. This power should be enough even with a small margin to operate the mixer in an operating mode without heating the engine. Transmission for rotation of the “pear” was put on a two-stage chain transmission with four sprockets: z1=11 teeth – scooter “Ant”; z2=40 teeth – from agricultural machinery; z3=11 teeth – scooter “Ant”; z4= 75 teeth – from agricultural machinery; total 40/11=3,64 and 75/11=6,82. And then: 1000 rpm/3,64/6,82= 40 Rev/min. Itself chain used scooter “Ant”. Asterisk z4 is mounted directly on the shaft of the working body is “pear”. Two asterisks z2 and z3 are located on the same shaft which is mounted in a bearing in the housing of agricultural machinery, and the sprocket on the motor shaft. The shaft bearings “pear” – a ball closed, the ones that fit on the seats of the shaft. One of them is installed in the steel support body of the machinery, approached the size of the bearing, and the second case could not be found, because the bearing was larger, and had to be manufactured separately. 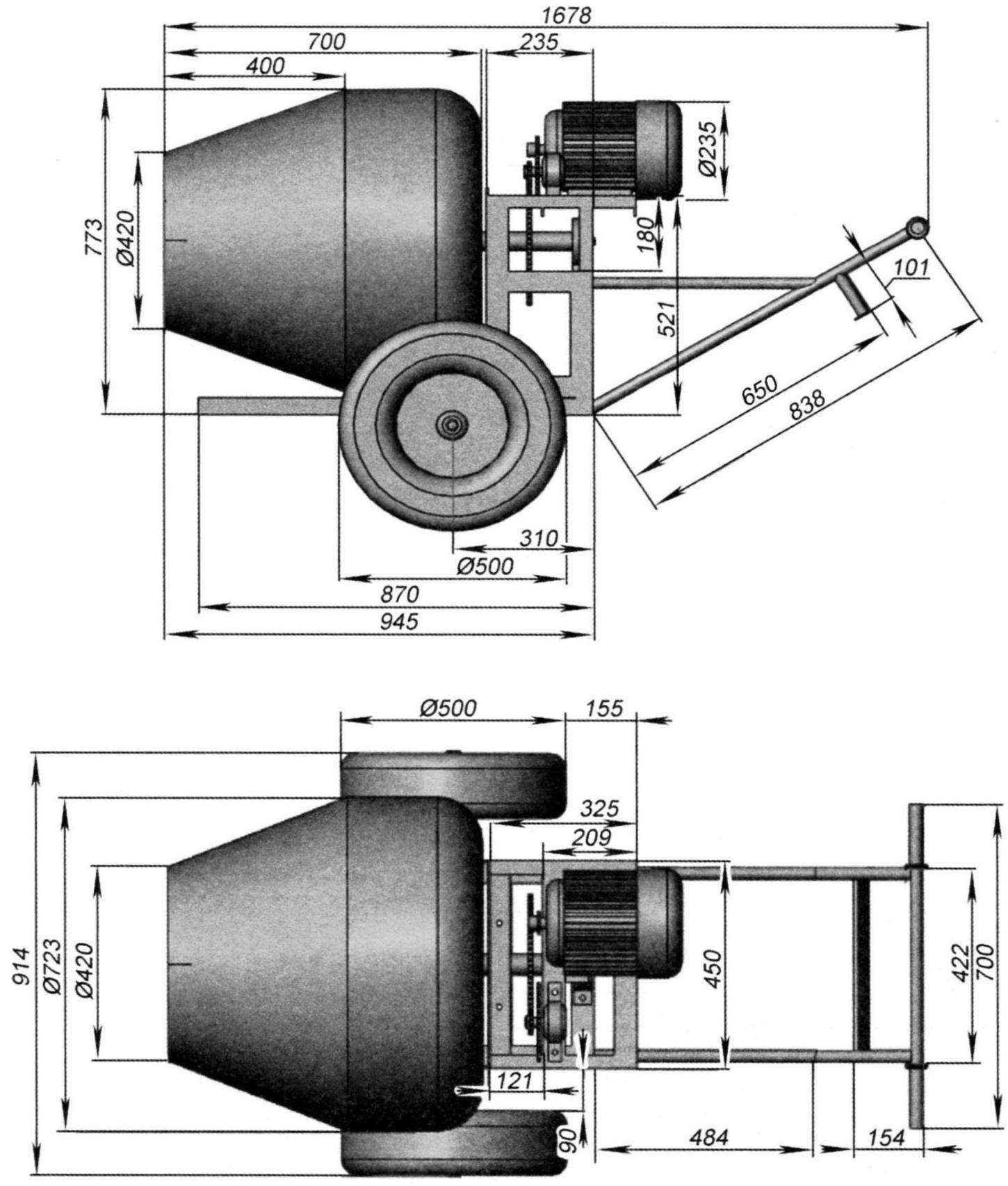 “Tipper” mixer: main dimensions
Frame mixers are made mostly of metal parts dimensions: mm 40x40x4, 50x50x5 mm, 30x30x4 mm and steel water pipes with a diameter of 27 mm. the Axis of the wheels made of metal water pipes with a diameter of 50 mm, which is welded to both sides of the axis of the wheel axle.
When linking mixers it is very not advisable to do the arrangement on “revolution” “pears”. And yet, and based on the experience of numerous concrete work, if possible, like the neck of the “pear” lower as low as possible to the surface “of the earth”, so how to load building materials in the mixer had quite a lot. The volume of the transshipment of materials for the day work is significant, and reducing the height of lifting of materials, reduced labor costs. Based on the above objectives, designed and built the described apparatus.
This mixer is installed directly at the place of pouring the concrete will start and be loaded with construction components. I have run from three-phase network through three phase switch.
After the mixture is mixed, the mixer stops and stoops, and in this position poured the resulting solution into a bath (korenek). To tilt for unloading the concrete mixer is not difficult, as the center of mass is approximately above the axis of the wheels when it is in horizontal position, in which the applied force is small.
To transport the mixer attach to a horizontal position and pushing the handles, you rolled to any location. I transported over long distances it was not necessary, but if necessary it is easy to attach, for example, to the wagon with the tillers. 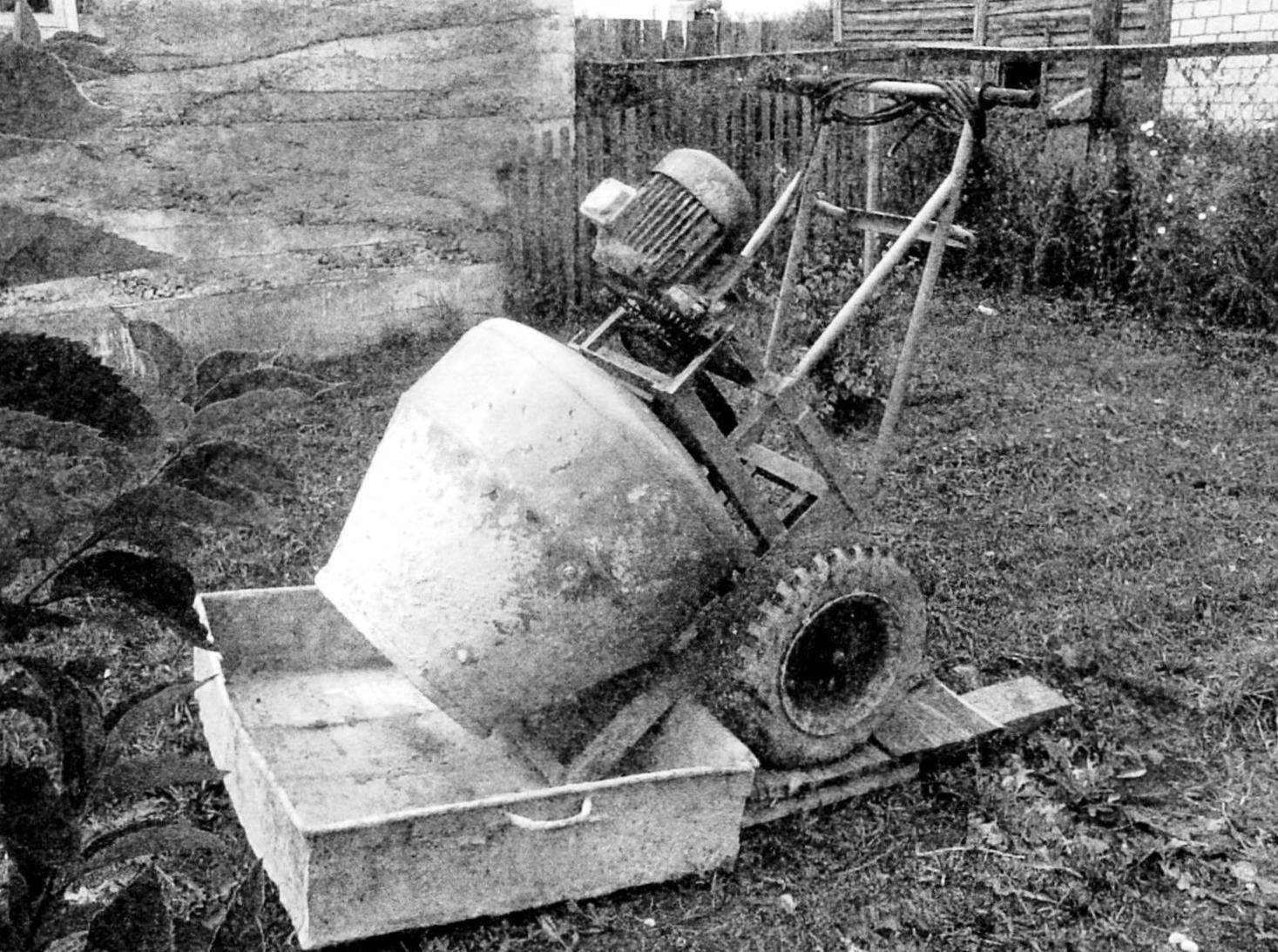 The position of the mixer when you die and fall ready mix
It was also intended to use the motor from a chainsaw “Ural-2”: there are cases when it is necessary to pour concrete at a fairly remote distance from the power source, and the electric cable is missing. Still it was a chain transmission. Only use the motor from a chainsaw is not yet required, but if need be, and possible.
This mixer was involved in the construction of more than 40 m3 of concrete and mortar.
Among the shortcomings: for such bath lacking a bit of height wheels plastic (about 5 cm), and therefore used the podium, although if you remove the limiter under the pear (it is not necessary), then everything will fall into place! Well and width: not all the doors this unit can pass as the apertures typically make up 70 – 80 cm So who would do such a mixer, decide what work you may need! The principal dimensions of the mixer are shown in Fig.
Rama is depicted in a simplified form, as the subframe was taken from a statement made out of area size 40x40x4 mm, were subsequently dovaren and enhanced area size 50x50x5 mm.
When you install the wheel axle is placed under the subframe pipe on a level floor and to approximately determine the equilibrium points, these points will podarite axle for attaching wheels.
I wish everyone who has undertaken a construction project – good luck!
D. ELEPHANT, R. p. Rodino, Altai Krai