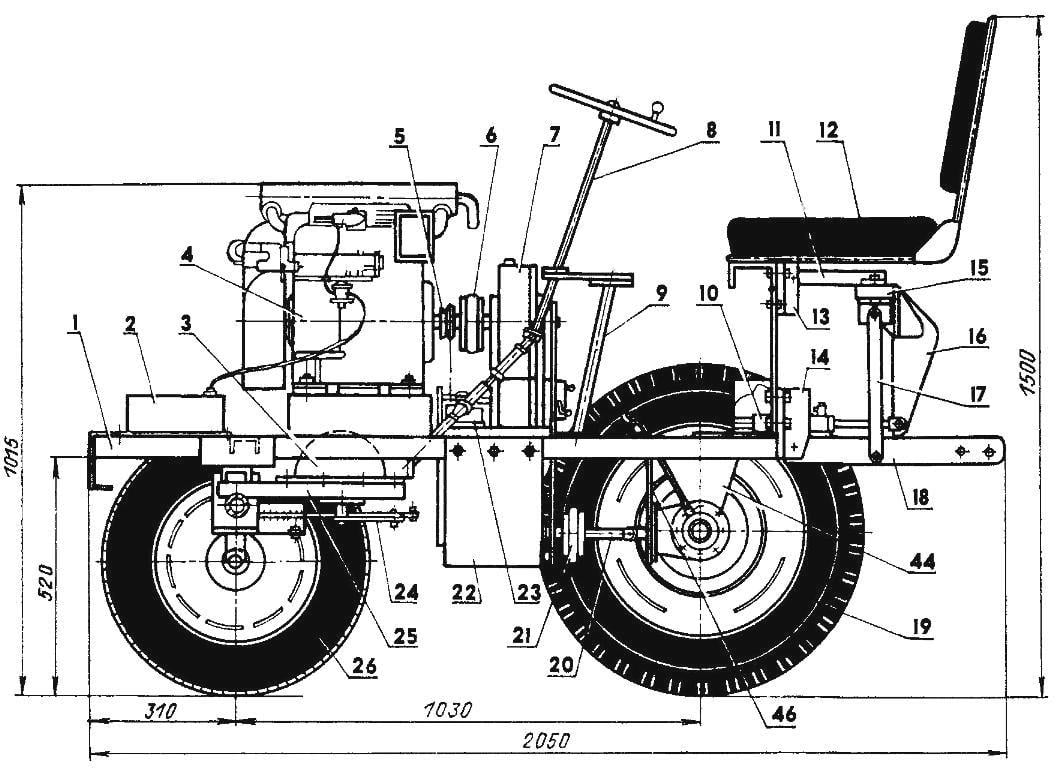 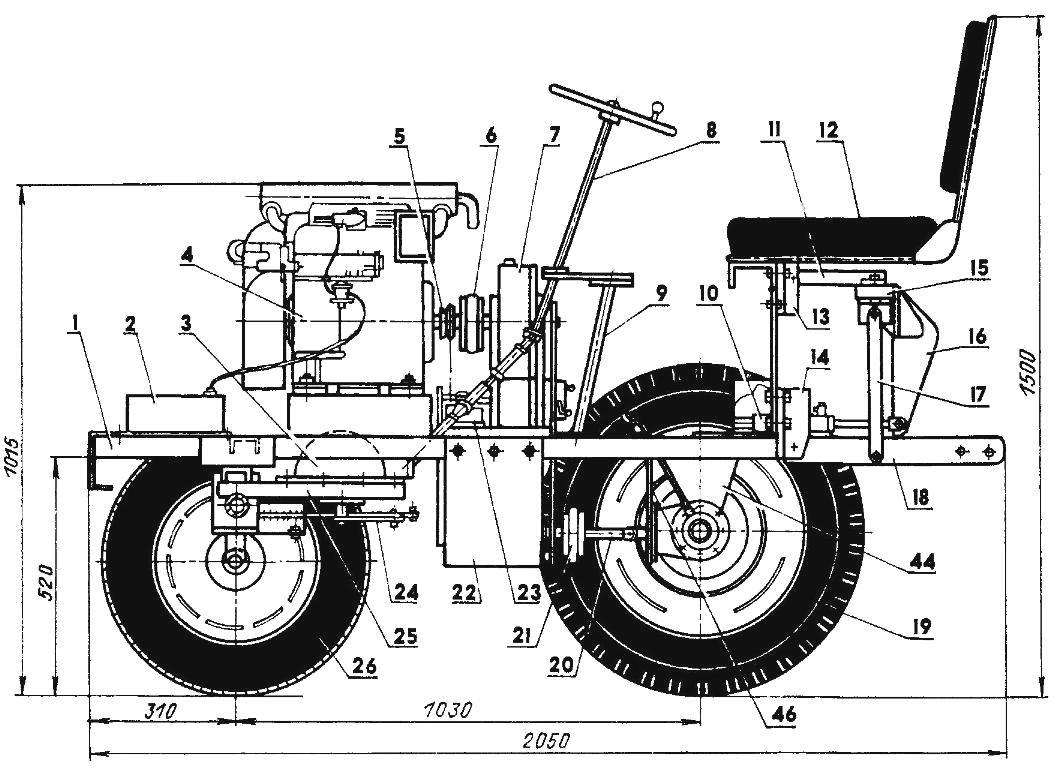 That’s already more than a dozen years G. Malakhov works as the chief mechanic tool shop of one of Moscow’s aircraft factories. But even more time (13 years) he is engaged in Amateur technical creativity, without which it is not at all his present and future. On account of his snowmobiles, motorcycles and other self-propelled equipment. Currently, life is made of Gennady Yurievich to move away from its “profile” — he made several high-precision woodworking machines for various purposes, set them next to the parental house in a village near Moscow and provides its villagers and residents of the nearby holiday village beautiful lumber that helps to survive him and his large family. But about the main thing he forgot — next year plans to collect long-planned amphibious with aerodiesel. Today we will focus on a small tractor, made by him mainly from the fact that was accumulated over many years in the garage.
Since my teenage years I could not safely pass the motor in need of a good renovation. All free time spent in the garage or workshop, where I worked my countrymen, a collective farm mechanic of the old school. More than a dozen engines were restored under his leadership.
Later came the idea of self-built self-propelled equipment. So there were my bikes, tricycles, snowmobiles and all-terrain vehicles on low pressure tires. Not all of them have represented the height of technical perfection, but most fit for purpose, and a younger brother and his friends got a lot of pleasure riding on them. I am also after something that was embodied in metal and brought to mind, began to pursue the thought of a new or improved machine.
In adulthood has been forced to produce more of the required units, including mini-tractors for all kinds of jobs on the plot. By that time I already had a little experience in this area were built wheeled tractor on the basis of knots and units of tractors T-25 and T-40, but it was too big and heavy.
For “gardener” was chosen the most simple constructive scheme — lightweight welded frame from steel profiles, which fixed all the major components and assemblies of the machine. The frame consists of two side members, the front cross member, rear cross member middle bracket rear axle beam with eye hinge suspension of the front axle, a platform for installation of the unit, switch gear and pump, the base of the seat. 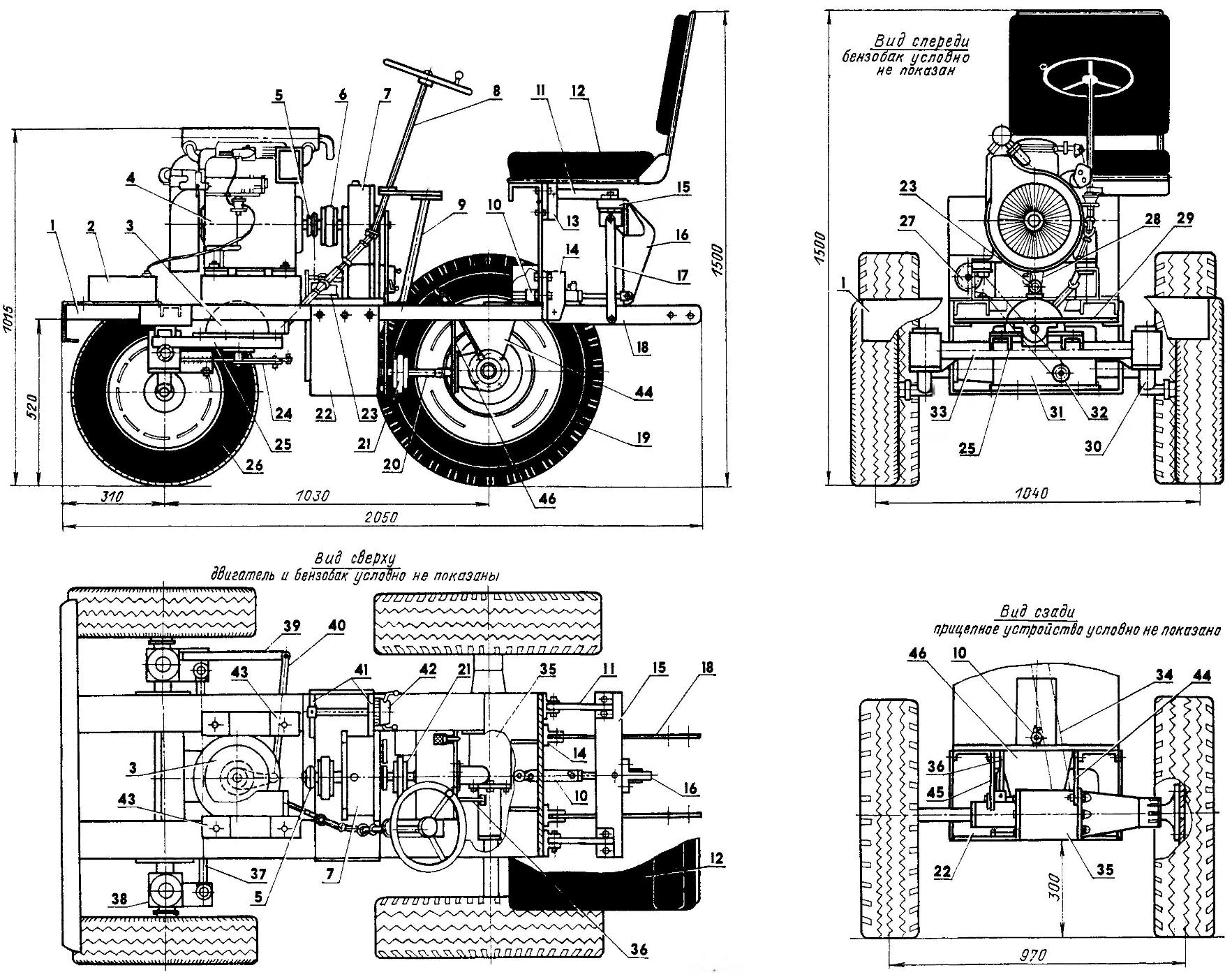 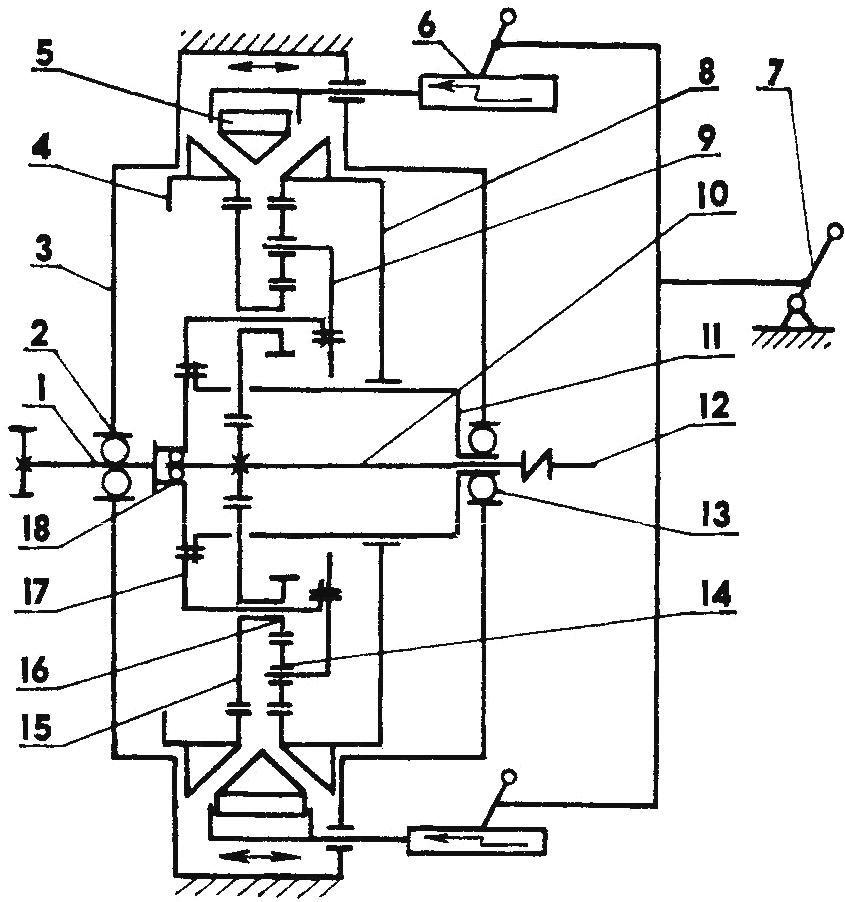 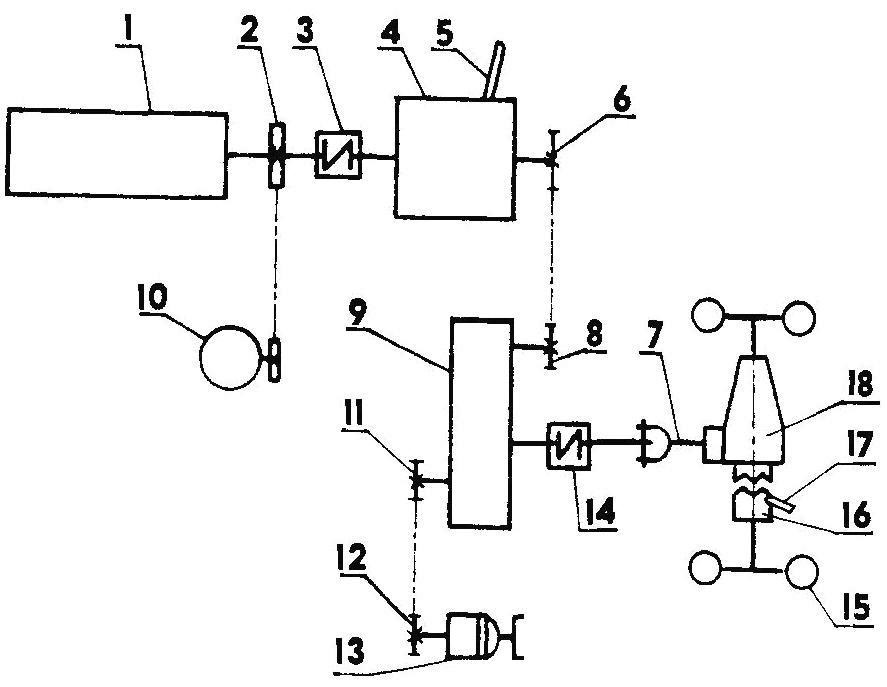 Scheme of transmission:
1 — engine; 2 — a pulley of the pump; 3,14 — flexible coupling; 4 — a universal unit; 5 — control lever “reverse — idle”; 6 — sprocket (z = 16); 7 — propeller shaft; 8 — sprocket driven (z = 13); 9 — gear box; 10 — pump; 11 — sprocket driven gear (z = 13); 12 — sprocket gear (z = 20); 13 switch gear; 15 — wheel rear axle; 16 — Cam clutch; 17— the lever of inclusion of the left wheel; 18 — a reducer of the rear bridge
Oscillating front axle equipped with a steering mechanism mounted on two steel channel, welded to the beam bridge. To the mechanism from the handlebar summed up the driveshaft. Turn of the front wheels is through a system of rods and rockers.
Rear axle, however, as the front has no springs or shock absorbers and rigidly attached to the frame of the two side and middle brackets.
As the power plant used 8-horsepower four-stroke 4-cylinder engine with forced air cooling UD-8 from mobile plant. It has a number of advantages over other engines, with good fuel economy, exceptional quietness and ease of starting in all weather conditions.
The motor is mounted on four rubber shock absorbers. The PTO output shaft UD-8 is a belt drive to a hydraulic pump, intended to drive the tow mechanism, and through the transmission to the rear wheel axle. Some loss in weight of the transmission due to the use of boxes and switch gear from the decommissioned milling machine is overcompensated by universal light unit and a reducer of the rear bridge, which is used as modified (if necessary, you can connect the Cam coupler enable left wheel) angular gear box tail rotor of the helicopter.
About universal unit it is necessary to tell separately. It is a planetary reduction gearing having two sun wheels movable in the axial direction of the clamping ring between them. When you move the ring via the rack and pinion is braking the left or right of the sun gear. In the first case, reduction ratio I n = 4,8 without changing the direction of rotation of the output shaft of the gearbox. When braking, the right sun gear is switched to reverse (reverse tractor) and increases the gear ratio to 7.3. If the ring is in an intermediate position, the engine is idling. The control lever “reverse — idle” have a simple three position lock located on the housing of the unit. Thus the Assembly performs three functions: gearbox, clutch and switch the direction of movement of the machine; and in combination with the transmission (transaxle) ensures the tractor ten speeds forward and ten back, which is very convenient when working in different soils. 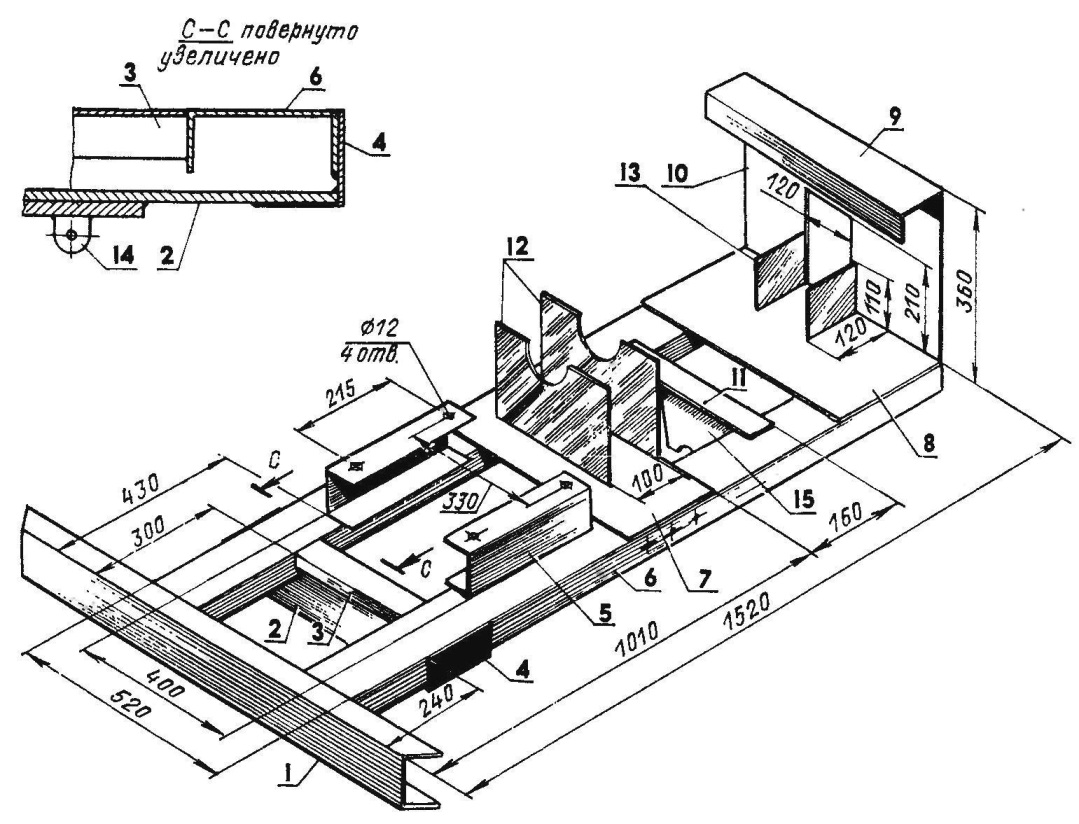 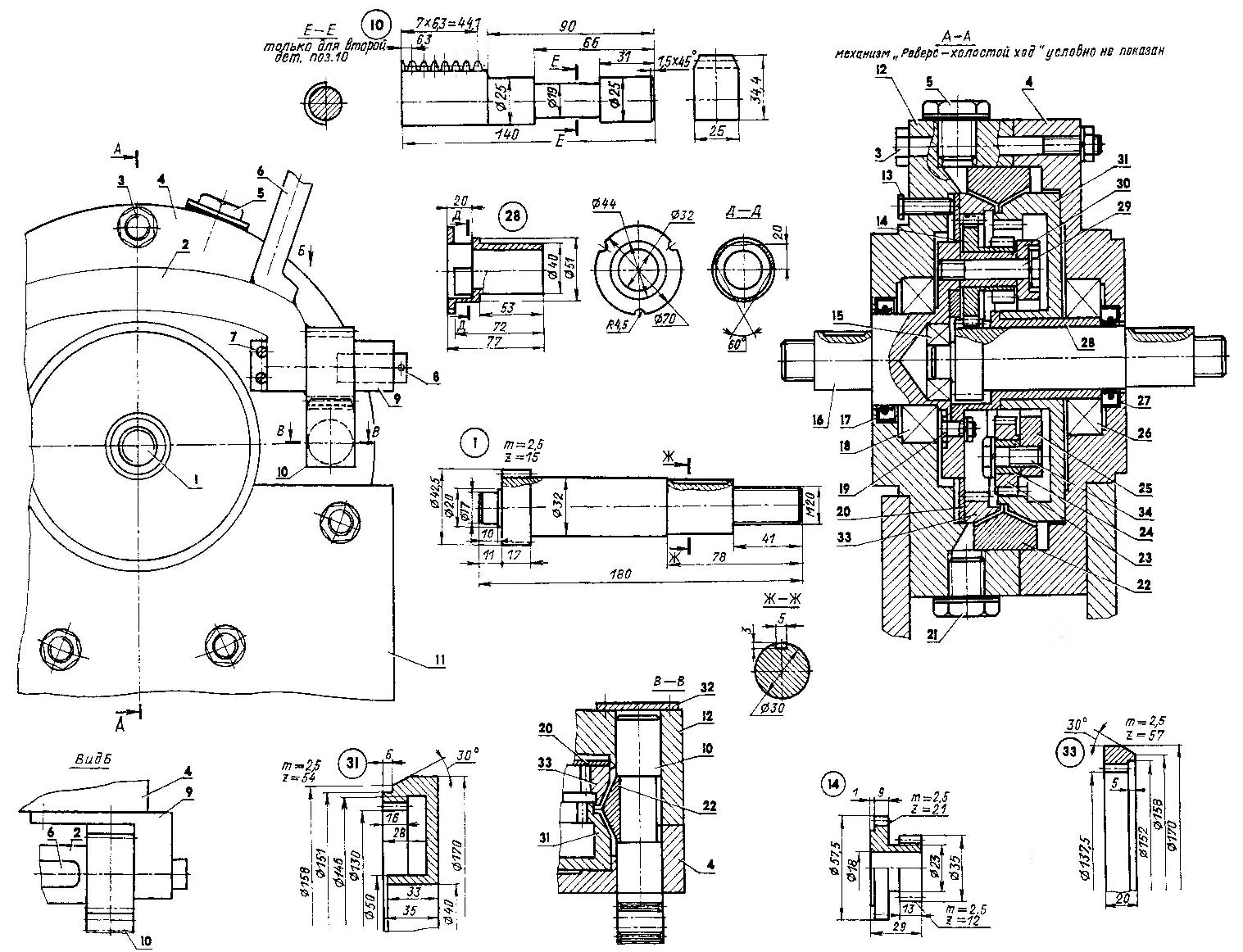 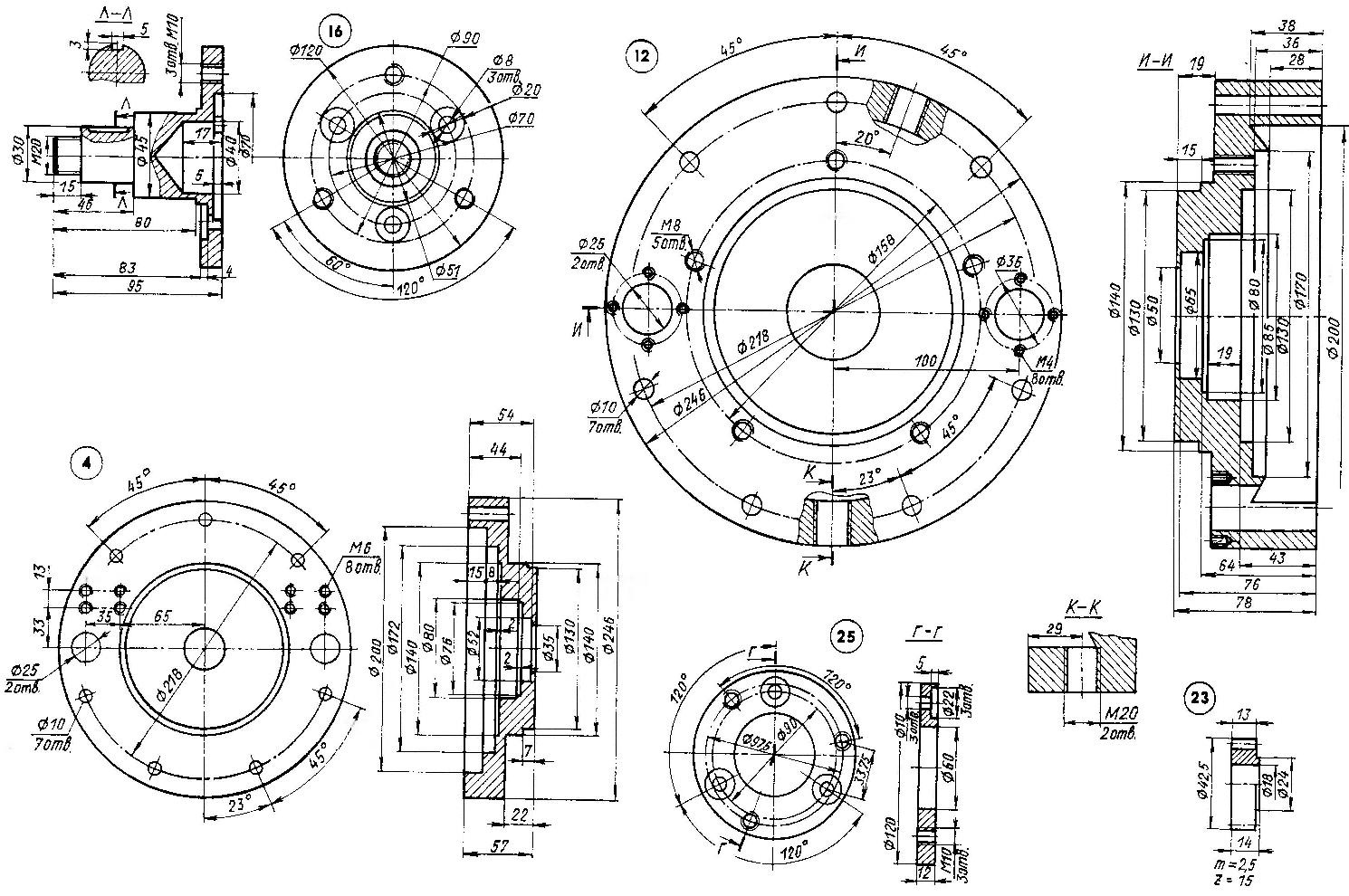