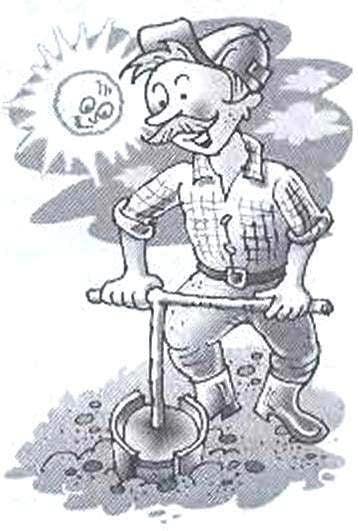 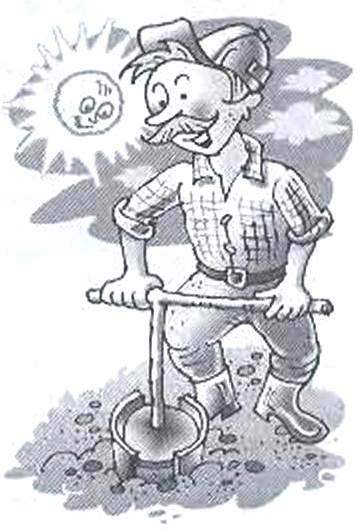 Where conventional shovel passes in front of dense soil, this unusual diggers enter the ground like a knife through butter, though the effort inform her foot is almost the same. The secret lies not only in originality of design, but also the new technology of digging remotely resembling a job with a hand drill.
Device
The working part of the tool can be represented as an inverted metal Cup with slit in two opposite areas of the walls. Its bottom is welded tubular stand tubular with the same cross together, they serve as a kind of stalk, with which tool and deepens into the soil and extracted from it along with you to cut a cylinder of earth. In the resulting hole can be omitted, for example, the tuber of a potato and “plug” the hole excavation “tube”. Such holes suitable for planting shrub or cuttings of fruit trees.
Manufacturer
To make such a device, you will need gas. And to form a working part of the tool in different ways, we consider a simple pipe of suitable size.
So, take a steel pipe with an internal diameter of about 120 mm and a thickness of 3 mm. Cut off from her “tube” with a length of approximately 160 mm. and it is performed by two “window” sizes of 50 and 80 mm, are located against each other. Practically we get two separate concave shell, the vertical edges of which are sharpened, forming a cutting edge, as shown in the figure. 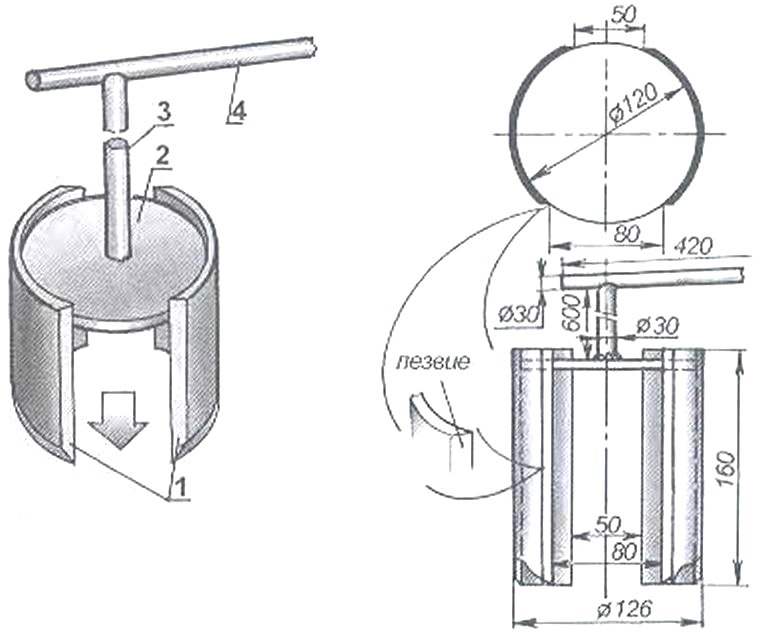 Universal digger:
1 — side shell with pointed edges; 2 — support plate of the tool; 3 — strut; 4 — control arm
The top edges the two shells are welded to a strong disc with a diameter of 120 mm, so that between them remained the mentioned distances 50 and 80 mm To the upper surface of the disk is welded to the front of the pipe with a diameter of 30 mm, and it, in turn, perpendicular to the lever, the same pipe he will play the role of a transverse handle of the tool.
Work digger
Described tool differs from traditional devices in the Arsenal of farmers and gardeners not only in appearance but also its application. In this sense, the digger has its advantages when performing large-volume, over an extensive area, where its features provide noticeable relief of labor and simplification of operations. For example — in manual planting potatoes in large areas.
The process will look as follows. Landing takes a digger for control arm, sets her work head to the right spot and pushes into the soil with your foot, if necessary (if the soil is rather compact) making the small arm of the reciprocating rotary movement.
After this penetration occurs the opposite effect: pulling with both hands at the same lever, the digger carved out with its cylinder of soil, opening the resulting round hole and put the tuber, “sealing” his released from digging the soil.
In the same way, harvested and holes for planting flowers, plants, cuttings of shrubs and fruit trees.
B. VLADIMIROV