THERE, ZENICA EYE. Our vision — natural stereophotography: the image of the same object on the retina varies, as each “eye” sees the object from a different angle. And only in the brain the signals from the retina from these different images are processed into one three dimensional picture.
This picture will be clear only when the following conditions (see Fig. 1). Considering the subject matter And in space, we obtain the image A1, which occurs in the right and left eyes on the so-called Central fovea of the retina — about the middle of the yellow spot, where visual acuity is maximal.
When looking at more distant subject In his image B1 on the retina of the right eye coincides with the Central hole, and several in the left offset (distance А1Б1). If the offset, or disparity, is small, then there is a sense of spatial distance of object B from A, or stereo.
However, a large disparity the stereo is broken, there is double vision. The observation in this case, it becomes difficult, tedious, or even impossible. Established practice that the allowed disparity, which fully retains the convenience of monitoring the stereo, is determined by the angle α, the value of which should not exceed 70′,
This is a very important condition of stereoscopy have no place in conventional photography. It implies a number of specific requirements to the stereo collection, to which we will return specifically. While will limit ourselves to the following General remark.
In conventional photography, we have the right to choose when shooting a story of any length in depth, to vary the sharpness of individual plans for future photos. When creating a stereo pair, the photographer has no such liberty: he ought to know and be mindful of the maximum allowable value of α=70′. As practice shows, for the vast majority of stereo images of the required sharpness for the full depth of the shooting space. Moreover, the zone of maximum stereo effect when recording located from about 3.2 to 11 meters.
THE STEREO COLLECTION ORDINARY CAMERA.
As for a stereo pair you need two frames, an ordinary camera can shoot only stationary objects, landscapes, architectural ensembles, portraits. Despite these limitations, this survey is very interesting and opens up great creative possibilities.
Stereo collection ordinary camera you can conduct a “hand” (see No. 8 in 1973). Especially convenient for this purpose SLR cameras: they on the mirror or glass mines of the viewfinder can cause the lines limiting the frame size 24X30 mm.
When the shooting conditions require a long exposure, use a tripod, or use special portable devices: cord or chain, short rod-tube on the end of which the tripod screw, screwed into the socket of the camera. Stepping on the cord and pulling it, increase the stability when shooting. The same purpose is served and the tube, the end of which rests on the chest in a special Jack in a leather loop around his neck. 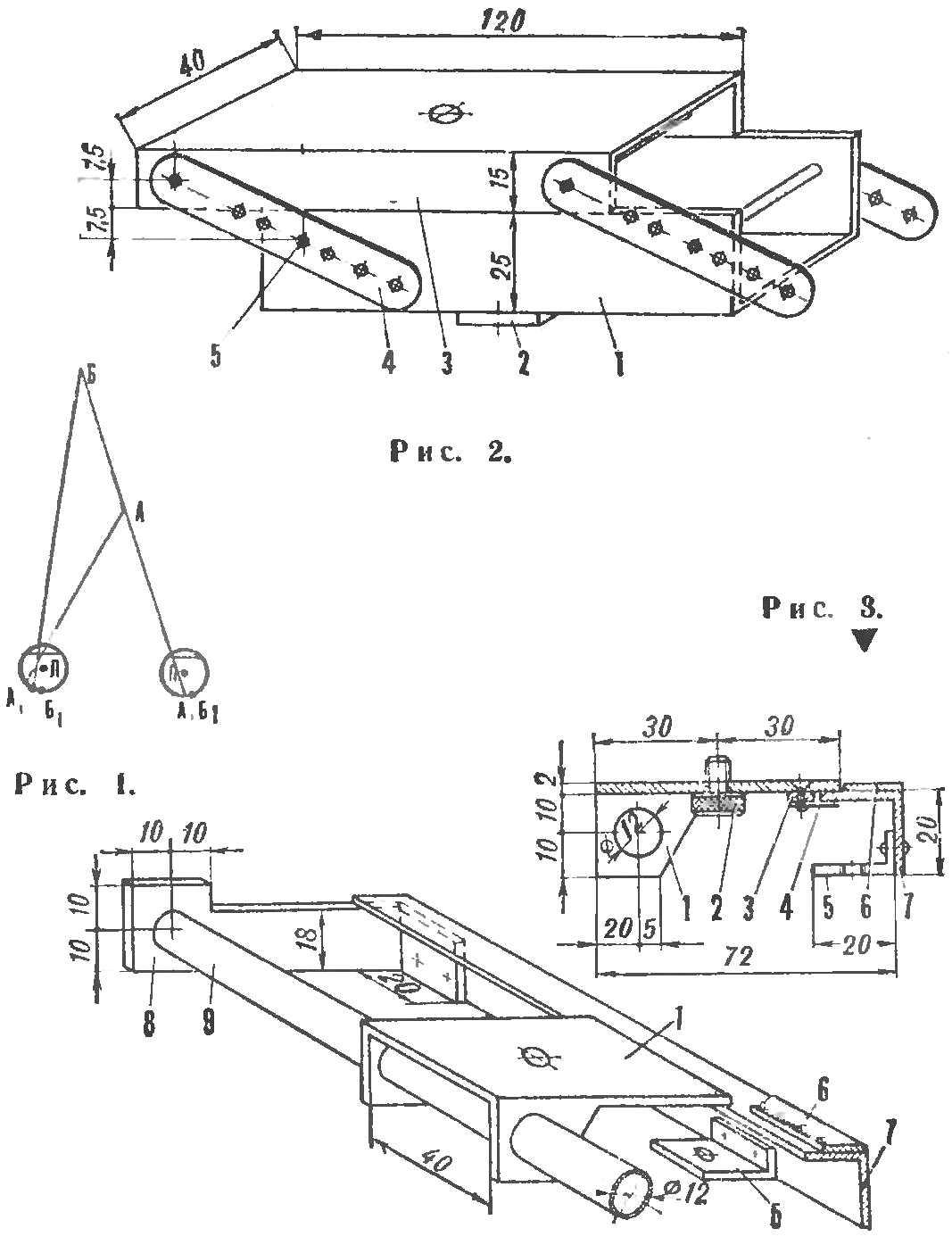 The most perfect stereomike you can get if you use a good steady tripod and a special device is required for installation of survey baseline.
Easy-to-use device shown in figure 2. Base 1 strengthened on a tripod with a bracket 2, which made the hole for the tripod screw, 113 bent sheet of aluminum. The supporting base 3, which pas through the hole leans to the camera using the tripod screw like the design of the base and connected with it by means of four hinge bars 4. Swivel 5 represent the M3 and M4 screws of the required length with nuts. It is recommended to make holes in the hinge straps simultaneously, which will increase the line space between holes, which should be equal to half of the shooting basis.
The most perfect device with variable stereovision for shooting any usual camera shown in figure 3. It consists of a platform 1 for fixing the camera using the tripod screw 2. The base consists of a square 7 20X20X2 size and length of 150 mm and the two cheeks 8, riveted by rivets to the square. On the same square fortified line 6 millimeter divisions and 5 square with a hole for the tripod screw. The angle bracket is fastened to the base by rivets. Between the cheeks reinforced pipe 9, which serves to guide 1. Pipe shall have smooth and even surface, and the platform smoothly without play to move along the pipe. To the area bottom riveted steel spring strap 4 via the gasket 3. The entire device should be cleaned and painted with an enamel paint, except those surfaces on which slides the platform. For mounting the camera on the device can be used in the screw-nut manufactured by the industry and commercially available.
N. HALDEN