Not going to tell you about what is a fascinating (though difficult) kind of leisure — Hiking. However, after a long and sometimes multi-day transition fatigue accumulates in the muscle and sweat and dirt on the body. In the heat you can bathe and relax in the river, lake or stream. In the same cool weather without a bath is not enough.
So here is a simple bath, which we used in the campaigns, arranged quite primitive. On the banks of a stream or lake was chosen the place of the appropriate stones, boulders: two reference and one overlying the furnace. Then the furnace was lined with cobblestones smaller. If this were left a few small holes for smoke and one larger one for laying the wood Protoplanetary such a stove for 2 — 3 hours and then it was shovel of embers and coals, and on her quickly erected the tent. The bath was ready — desire to bathe. Water is heated in a suitable container by lowering it to pre-hot in the furnace of the heater or fire cobblestone.
But I want to tell about another (more advanced) camp bath, which was built in the final paragraph of the permanent route. Such a bath can be built somewhere in the garden or as a holiday option.
In the recent past (and this was in 1990-x years), I supervised the section “Hiking” at the city station of young technicians. So guys-members and friends-tourists, we decided to build a Hiking bath in one of the beautiful long logs — destination tourist route of the day.
First workshop syut manufactured stove almost because of the material that was at hand. And his choice was poor.
The basis of the stove was a steel pipe with a diameter of 300 mm (wall thickness 5 mm) and a length of 800 mm. was found that slotting in a tube door for the firebox and blew nothing, and therefore decided to make the furnace of the “samovar” — pass firebox and the top vertical loading. 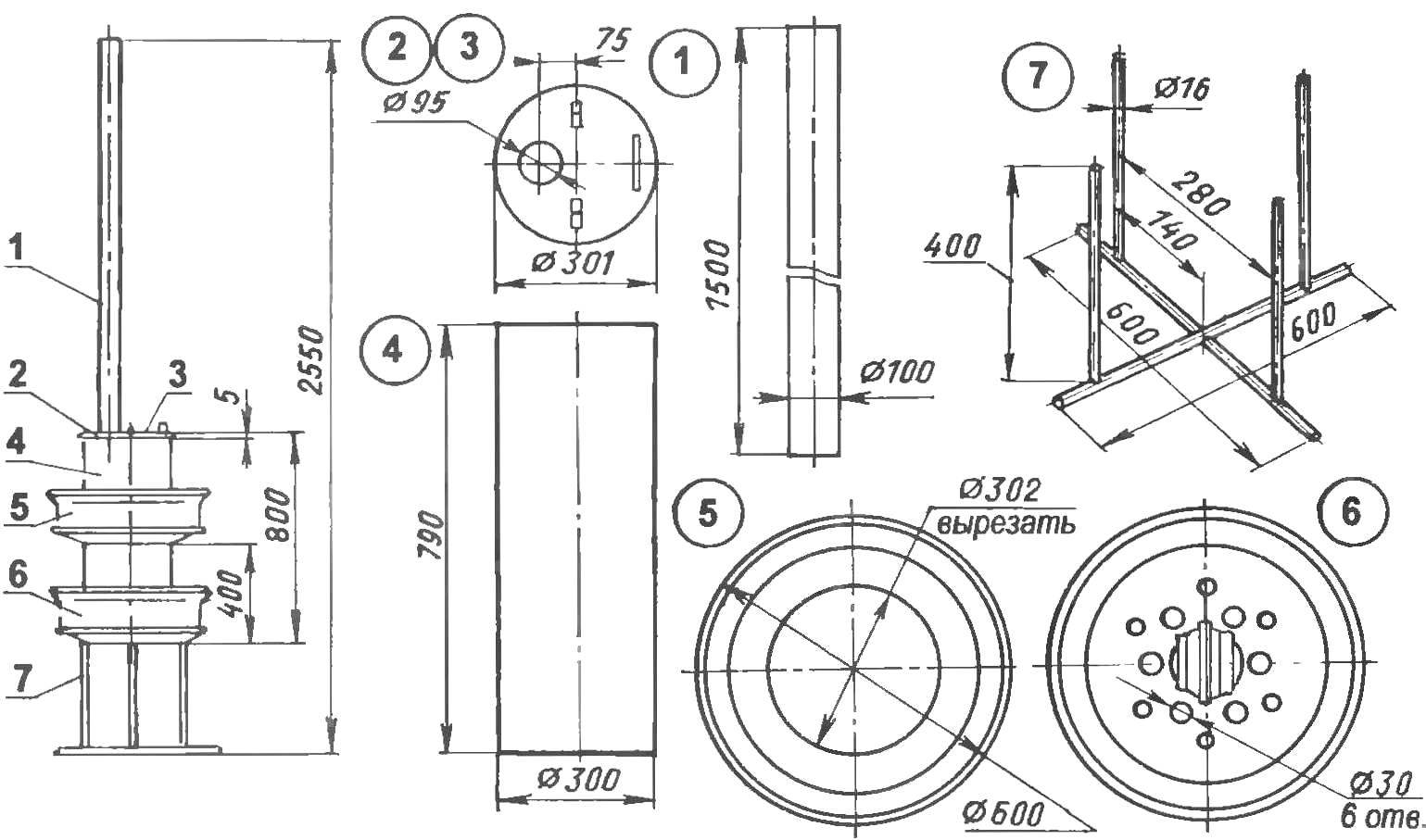 Oven-stove type “samovar”:
1 — a chimney (Ø100×3, L = 1500); 2 – “deaf” polycrase (steel, sheet s5); 3 – polycrase-Luc (steel, sheet s5); 4 – furnace (tube Ø300×5); 5 – pallet for stones (wheel); 6 – pan-burner (wheel); 7 – frame (steel rod Ø16)
As bottom used big wheel — drive with a rim (or from the tractor truck or any truck), started the Central (hub) hole steel rods that formed the grate and drilling a few additional small holes in the disk.
Another of the same disk, cut out a Central hole with a diameter slightly larger than the pipe, and put on the stove, and welded it to the top. Both drives thus served as a pallet for accumulators of the heat I’ll tell you that the stones in the log was not, and therefore as heat accumulators used stored repulsed and rejected ceramic electrical insulators (glasses).
Cover of the furnace consisted of two semicircular parts; one with a hole for smoke, tightly welded to the furnace body, and the second pivotally attached (hinged) to the first through the flap and into the furnace was loaded with fuel.
As a support for the stove used a frame welded from steel rods of 16 mm diameter On the upper free ends of the articulated struts are installed and welded to the lower disk of the stove. The frame itself was zaglossus into the soil so that between the grate and the floor remained a period of not less than 150 mm.
The chimney of the stove-heater is also made of steel, but thin-walled with external diameter 100 mm and height of 1500 mm. Mounted it over the hole in the welded polycrest. 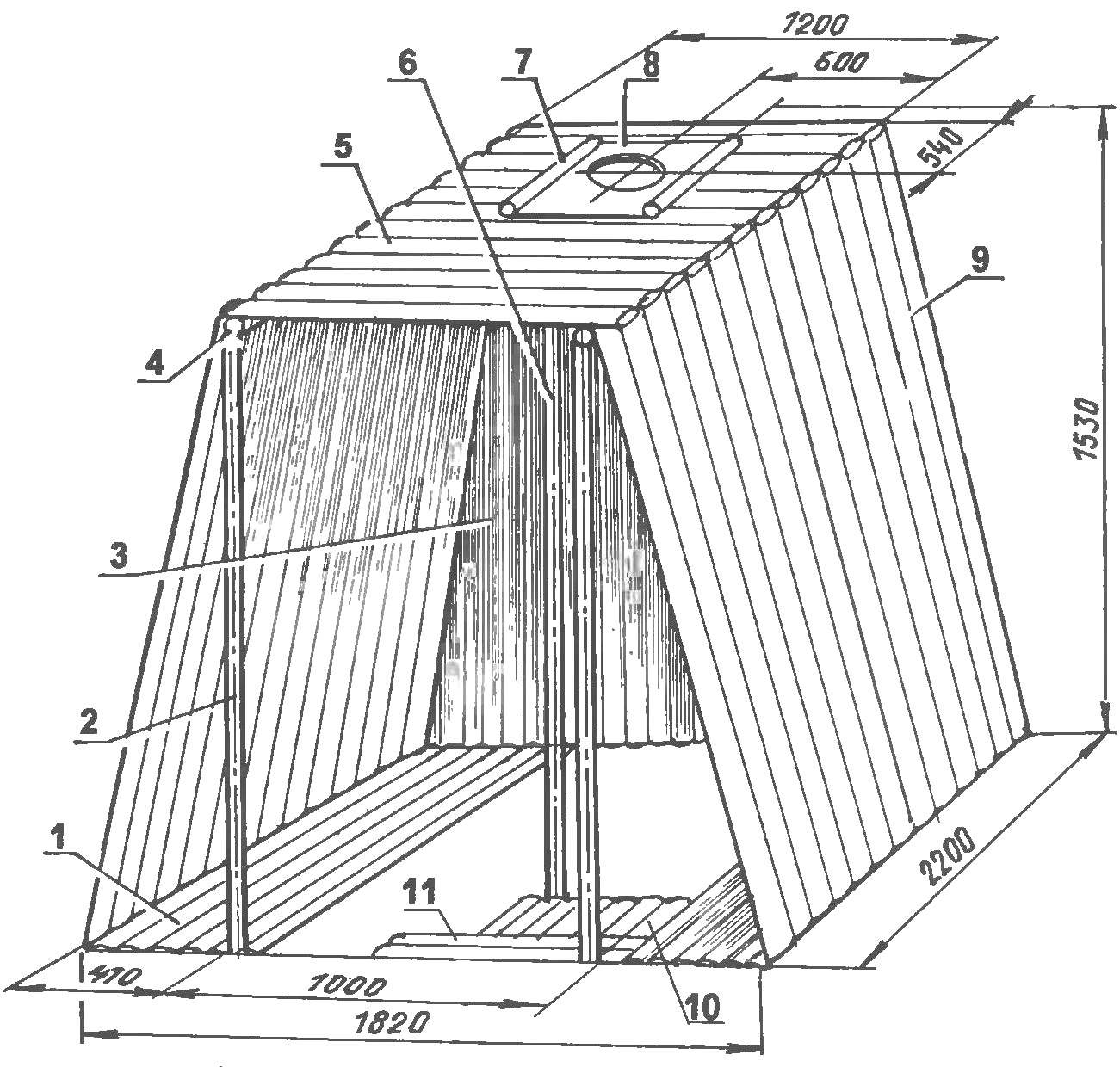 Bathhouse:
1 — shelves-seat, 2 pieces (aspen poles Ø50 60…, according to needs); 2 — front, 2 piece (maple pole Ø 100…120); 3 — rear panel (aspen poles…Ø70 90, according to need); 4 — longitudinal beam top obvjaza, 2 pieces (maple pole Ø 100 ..120, according to needs); 5 — ceiling (aspen poles Ø80, on demand); 6 — rear rack, 2 PCs (maple pole Ø 100… 120); 7 — the relationship of the poles of a ceiling opening (maple sticks Ø50, 2); 8 — cutting ceiling (steel sheet s2); 9 — side wall, 2 pieces (aspen poles Ø70 90…, as required); 10 — floor pit (aspen poles Ø50 60…, according to needs); 11 —stepping stone (aspen poles Ø50 60…, according to needs)
In the coming weekend with a big group of tourists-students with a necessary tool, we went to the far log named Badger With a place where to put a bathhouse, and design consulted and decided on the way, and upon arrival immediately set to work.
First dug a pit with a step, and the place of installation of the furnace it still zagubili. Here was placed the frame with the furnace, re-covered with soil and rammed. After that, from a fairly thick maple poles mounted to the frame of the tent; put the four corner stands (pair front shorter than the back), a little zaglubit their slightly burnt (not rot) the lower ends and joined at the top obvjazom — longitudinal beams with cross members. The last “part” was the extreme poles of the ceiling. The poles were fastened together pre-prepared staples.
Wall also collected from poles, only from aspen and thinner as the stockade. Poles of the side walls were installed with a slight slope, and alternately the butt, the tip of the rod down with little penetration for stability. The back wall is made vertical (although it could be done slightly sloping, installing poles with butt down only). Poles of the rear wall associated with racks and interconnected with wire.
After the construction of the walls of the bathhouse were covered with ceiling also made of poles. The ceiling was made of square (300×300 mm), an opening which is closed by a steel sheet (formed by cutting) with a Central hole with a diameter of 300 mm for the withdrawal chimney.
At the end of the construction of the wall of the bathhouse, or rather the gaps between the poles, smeared with clay, and the ceiling is covered with soil, and the top is still overlaid with turf. In General, similar was the bathhouse in the badger’s den (if someone saw it, maybe to compare).
The entrance to the bath (whole front section) was covered by a canvas canopy with a window. Although it was quite possible the most part of its run in the wall, leaving a small entrance hole.
Seat-shelves (they were just on ground level), on the floor in the pit and on the step is also put to one slim pole. 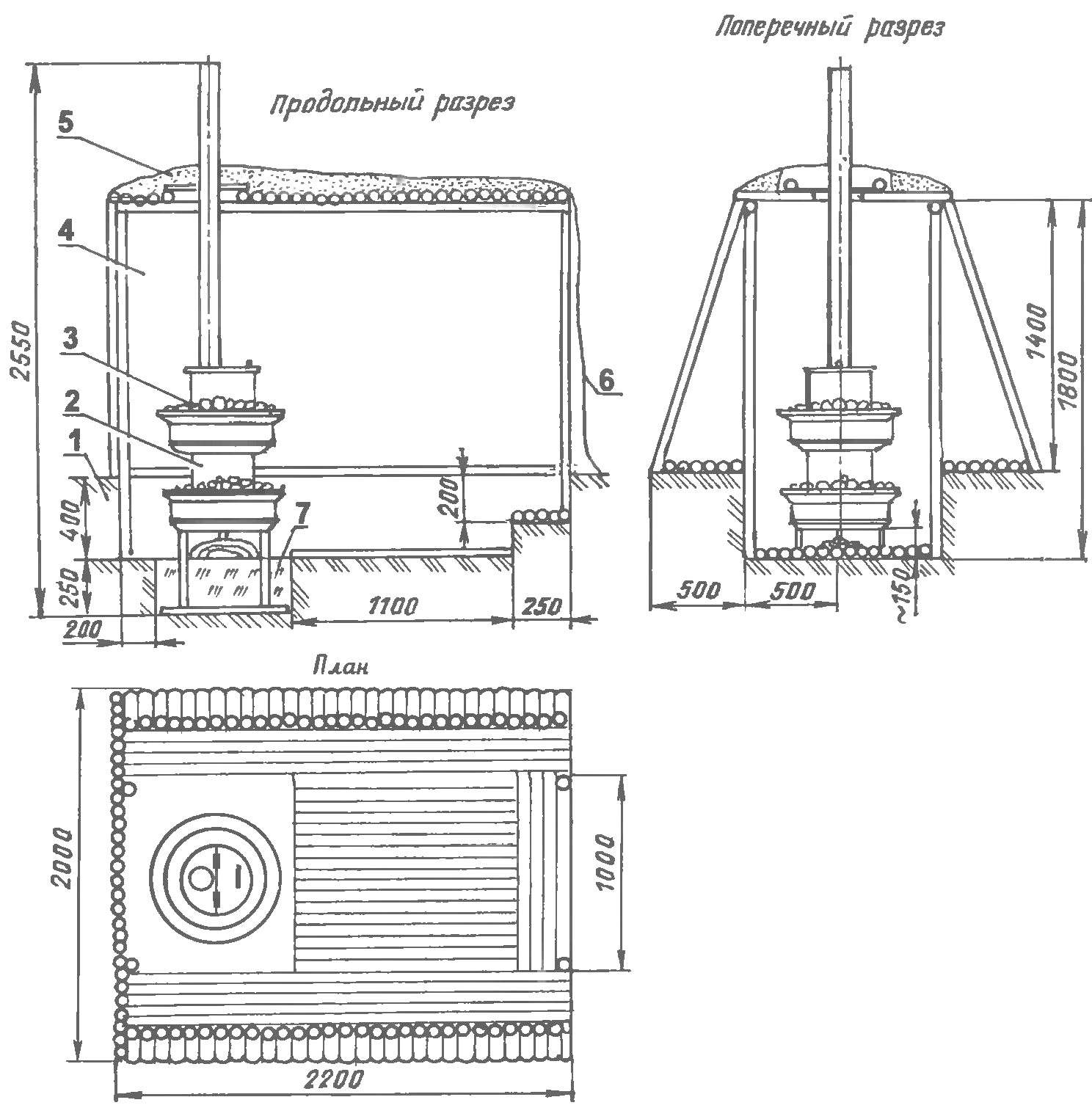 Plan, longitudinal and cross-sectional view of the bathhouse:
1 , a native soil fields; 2 — oven-stove; 3 — a heat accumulator (electric ceramic insulators); 4 – construction; 5 — ground, covered with turf; 6 — canopy (canvas); 7 — soil backfill
After construction, did a test furnace. In this “samovar” furnace design is the difficulty in its kindling: no dry bark and chips are not enough. First in the oven it is necessary to load some kindling, then light the bark and throw it in the oven on these chips and when they will light up, remaining to reload, and then firewood. After a warm-up for 5 — 10 minutes you can lay wood in the oven until it is fully loaded.
After 30 — 40 minutes after firing, even in winter bath is ready and you can bathe. Further support and regulation of temperature in the bath is carried out by podbrosili raw wood and covering the ash-pit hole pile of ash.
Especially memorable for the tourists in the club were bath sessions after the winter overnight camp, followed by swimming in the fluffy snow.
The lead story in the past tense that’s why. About our camp in the Badger log found out “spirited” children — seen and they liked the bath; for before it was built they did not come. But used guys, its ugly and every time I trash not only the bathhouse and the camp, but pine forest in the area. When we are tired to clean them and restore the destroyed, the bathhouse was dismantled, and the place where she was standing, resulted in pristine condition. The furnace is taken back, and in the end, unfortunately, it still had to hand over in scrap metal.
A. MATVEICHUK, Zavodoukovsk, Tyumen region.