Parameters and characteristics of the model correspond to the categories Ѕ8А and Ѕ8В. The diameter of the container under the engine selected in accordance with a cross-section of the sleeve (MRD-2,5-3-3 or MRD-5-3-3). We present several design and technological recommendations for the production model.
In accordance with the requirements of this class the motor after operation must remain in the container, so the tube must be made more durable than the rocket modeling other types. The nose cone of the container is carved from solid balsa. Immediately after fairing in the tube container, cut the bottom of the hole Ø 8 mm. the Pole of the container and the fuselage carved from balsa plates 4 mm thick. After gluing, they need four to cover the liquid Amalita with intermediate sanding with fine emery paper. Rear part of the fuselage on both sides enhanced with overlays of plywood with a thickness of 1 mm.
Guide on which slides the wing when balancing the model, cut out of plywood with a thickness of 0.6 mm and covered with three layers of Amalita. Wing balsa plate thickness of 7 mm. After processing and lacquer coating it is cut in three pieces (two consoles and center section), and then glued together to form the required angle “V”. Then out of plywood with a thickness of 1 mm should be cut two gaskets and two castles. First wing glued to the strip (it is necessary to control the ease of movement of the wing along the rail) and then the plywood strips to the castle. The final stage: a rail with the wing fixed on the fuselage.
The horizontal tail of the rocket glider balsa plate thickness of 2 mm. After treatment and a fourfold coating Amalita it is cut and glued at an angle “V” corresponding to the one pictured. Washer vertical tail is also balsa — they will require a plate thickness of 1 mm. of the same material is cut the rudder.
The focus of the wing is made from pine slats with a cross section of 3X4 mm and is attached to the guide.
Pins need to bend the four lug and put them on the epoxy in the locations designated in the figure. Tubular guide” for the start of the vertical bend of aluminum foil with a thickness of 0.4 mm and the glue BF-2 is attached to the container.
Now — adjust the model in flight planning. Insert into the container the exhaust the engine, lock the wing in the front position tires a cross section of 0. 8X0. 8 mm, stretched between the ears A and b, and run the model. After the necessary adjustments and adjustments check the ease of movement of the wing back and forth. 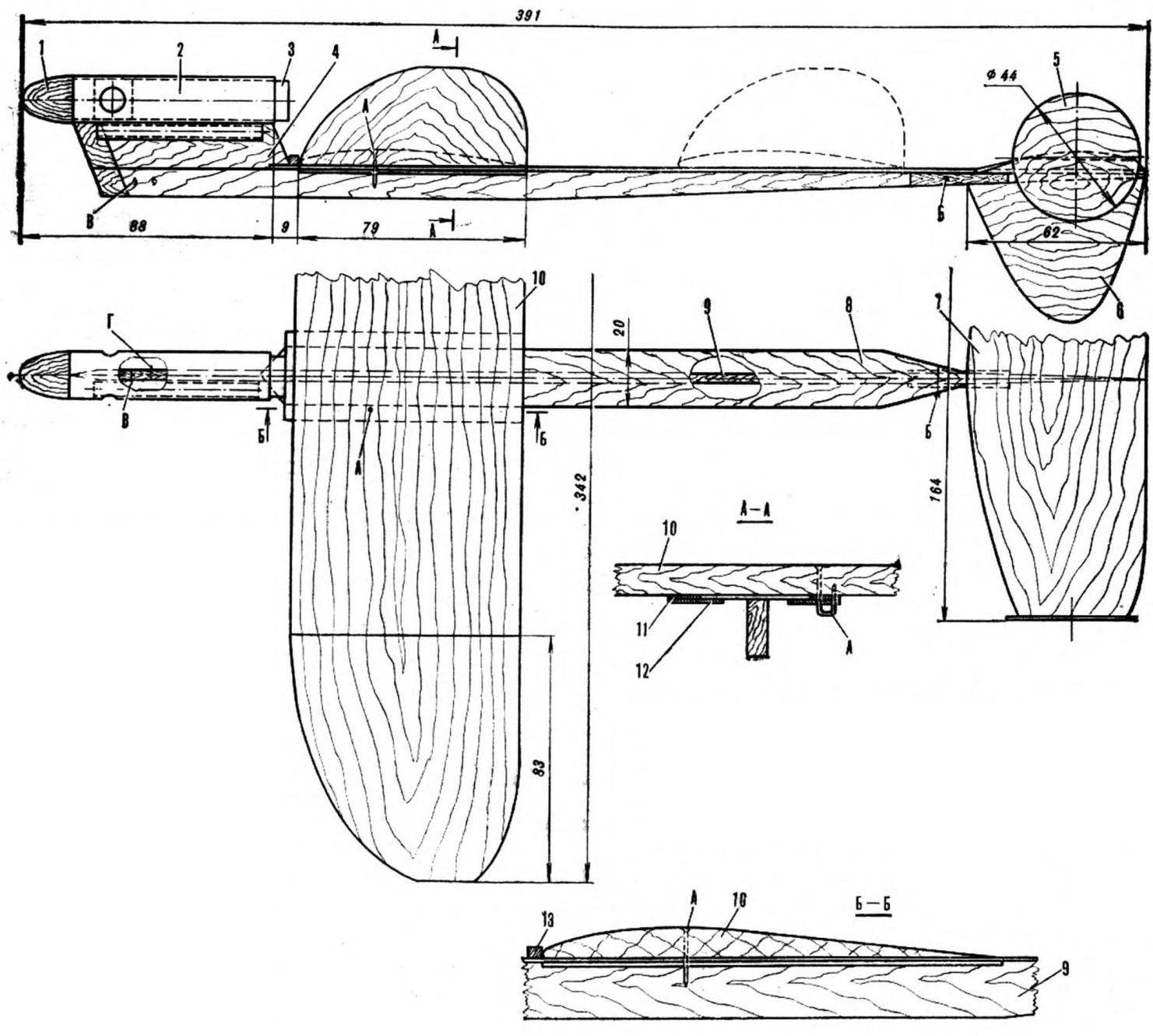 Rocket glider category S8A (S8B):
1 — cone container, 2 container engine, 3 — engine, 4 — pole container, 5 — keel washers, 6 — Kiel, 7 — horizontal tail, 8 — guide wing 9 rail of the fuselage, 10 — wing, 11 — gasket, 12 — castle 13 — the emphasis of the wing, A, B, C, d — lugs.
Now slide the wing in extreme rear position, the lug on the wing And tie the nylon thread 0.3 mm thick, pass it through the eyelet, and then through the eye and hole of Ø 8 mm in the container and tie it PA the ear, At the conclusion of the prelaunch insert into the container engine. It needs to be set fairly tight, so that after combustion of the charge from falling out of the container.
Launch of the model occurs in the usual way — with a rod guide. After combustion of the charge nylon thread burn through, the wing moves forward and the model begins planning the flight. For training flights of this model with the engine, “MM mini” was shown the results of 80-100 C.