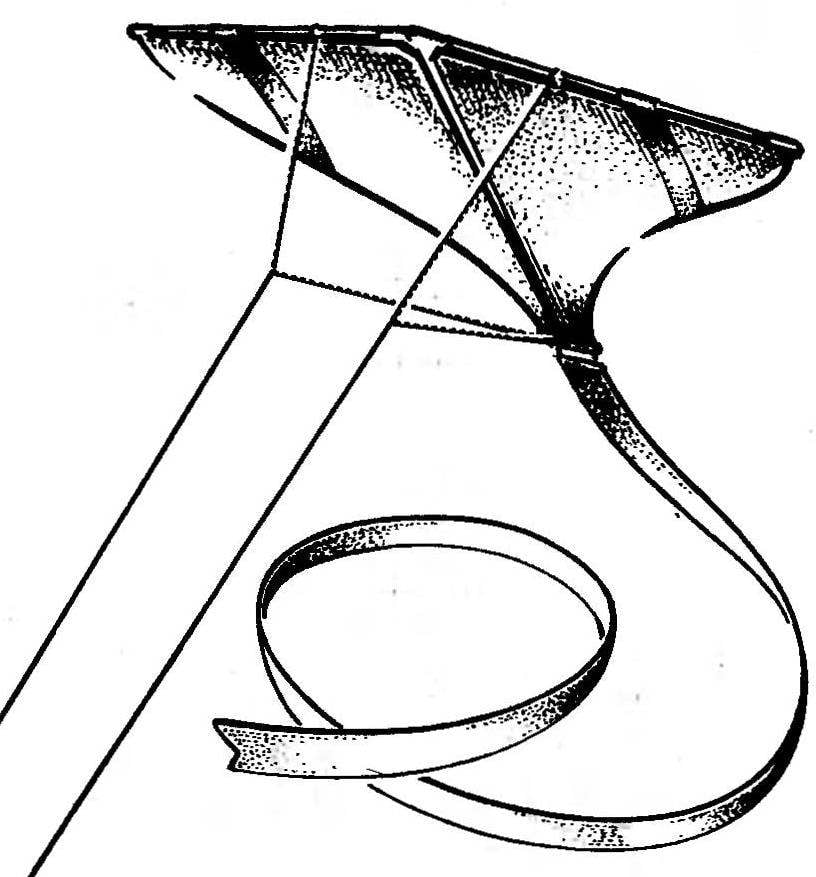 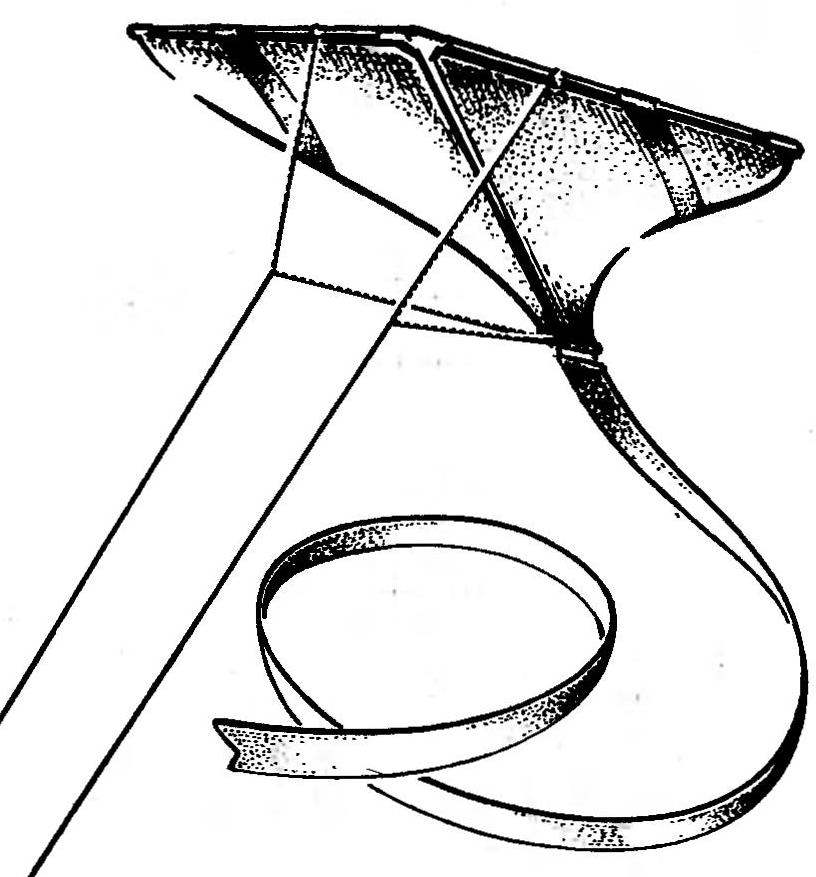 That a kite can be under the control of a pilot to perform almost a full range of aerobatics, very few people know. It should be noted that the modelers individual samples of superslow quite bulky and have a complicated design, which cannot reproduce is not for everyone. We offer our readers a new design “acrobatic” snake simplified scheme. Except for reduced dimensions, it is characterized by the possibility of quick Assembly and disassembly, which is invaluable during transportation.

If you decide to take on such aircraft, first prepare the materials for its manufacture. And they’ll need a little bit. First of all it is the Reiki of high quality grained pine or spruce. On the selected workpieces should not be resinous places and notable ROE; wood is good only well dried. Still need to find a small trimming millimeter plywood, which in extreme cases can be replaced with pressshpana (it is also called “cardboard”) with a thickness of about 1 mm. From the link best epoxy resin, although satisfactory strength of the connection can achieve and nitracline (the latter are applied with a “primer” – bonded surfaces first lubricated with glue and fully dried, then applied a fresh layer of the binder, the parts are tightly compressed to dry the seam for a period of three hours to days). On “sail” a snake is an ordinary polyethylene film, Mylar film or lightweight fabric such as “Bologna”. In the latter case, the serpent looks more professional and can serve more than one season; but the increased weight will allow him to confidently stand in the air only at high wind speed.
If you look closely at the drawings, basically it will clear the design flight the serpent and the principle of its manufacture and Assembly. Therefore, it is possible to stop only on certain features.
To protect from moisture useful wooden parts of the serpent after the end of their treatment to cover a thin layer of oil or nitrocellulose lacquer or paint. The membrane covering the “sail” connect on glue of type “Moment”. However, it is better to use “welding”, using which it is easy to strengthen when needed and all the edges in the patterns. “Welding” is a soldering iron with roller head or iron through the metal foil. This technology would first need to debug on unnecessary scraps of the film. On the outer ends of the wing, the “sails” must be a kind of pockets, in which, when the tension of the tissue would include Reiki spars. This will prevent the snake from showdown in the air.
Ready snakes must be balanced. This is done without bridles, and of the handrail, as when starting a normal glider. This files most often have to load the caudal part of the Central slats — coil rod near the tail of the split node of a thick copper wire or lead installation of nosing. Properly balanced snakes, flies by the hands of about 12 m. the Main feature is underused™ tail — a sharp ballooning after starting with the subsequent transfer into a dive. 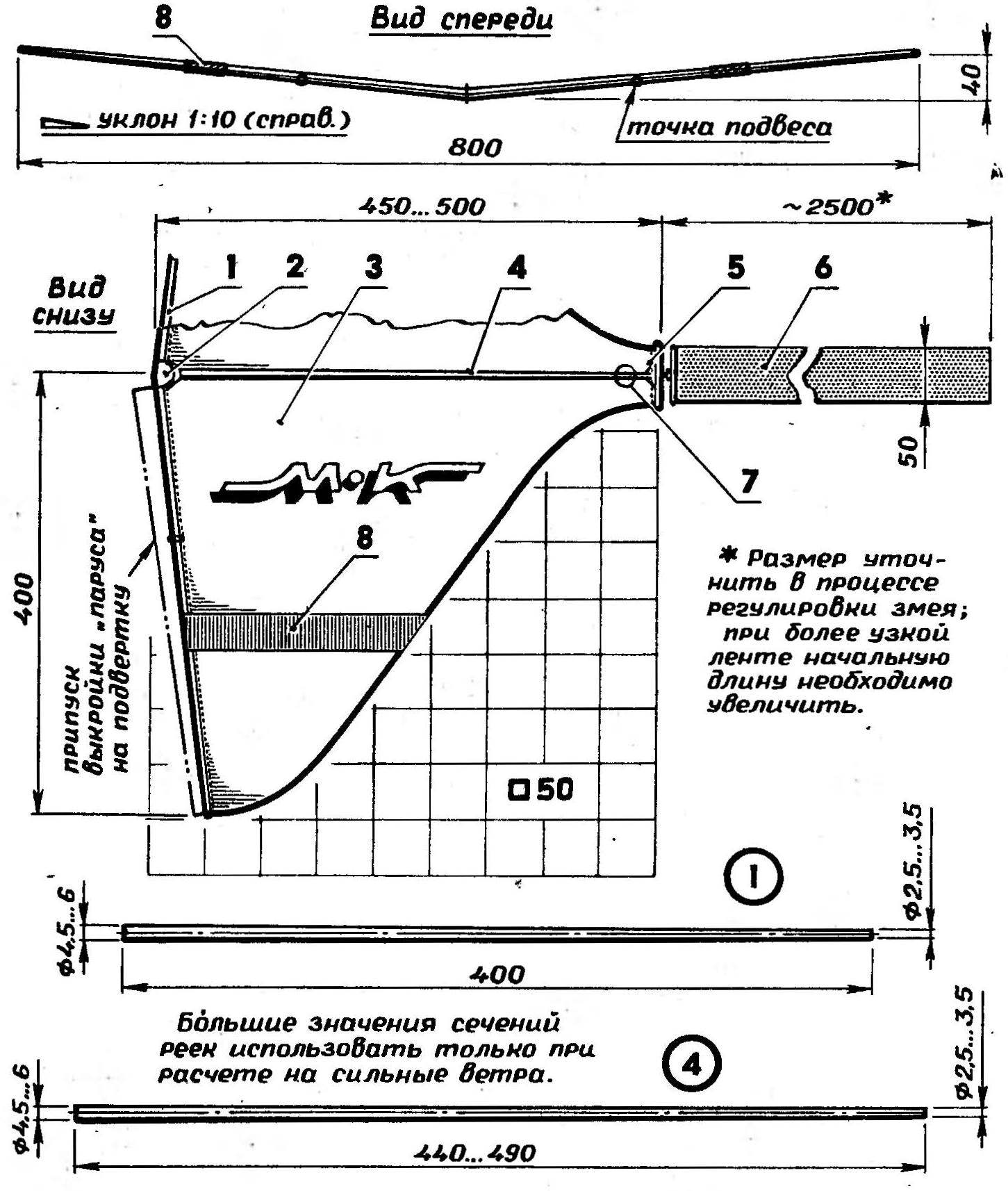 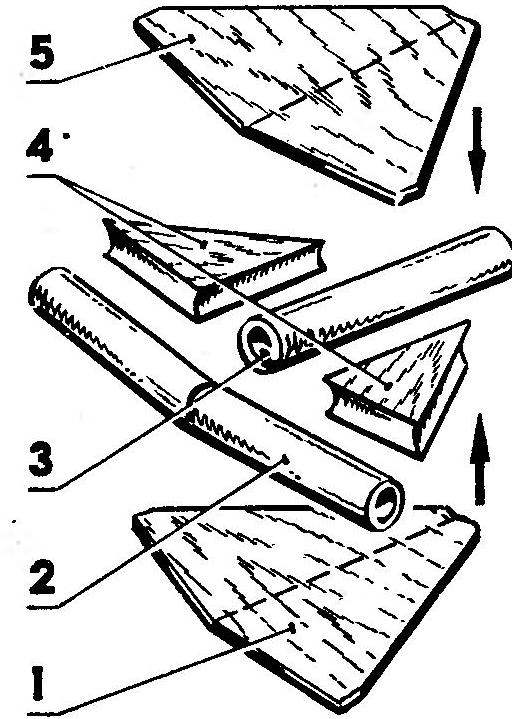 Bow knot connector:
1 — lower gusset plate (plywood with a thickness of 1 — 1.5 mm; axis cranking on the heated soldering iron until the desired angle shown on the form of a snake on the front), 2 — power tube connection strips of the spar (cable or Kraft paper epoxy resin, wall thickness about 1.5 mm; after manufacturing the workpiece to be cut in the middle and logotype drawing), 3 — Central tube (material of similar items 2), 4 — reinforcing wedge insert (Linden iliona),5 — upper Klondike. Length truncatetable details 2 of about 60 mm, the details of 3-40 mm 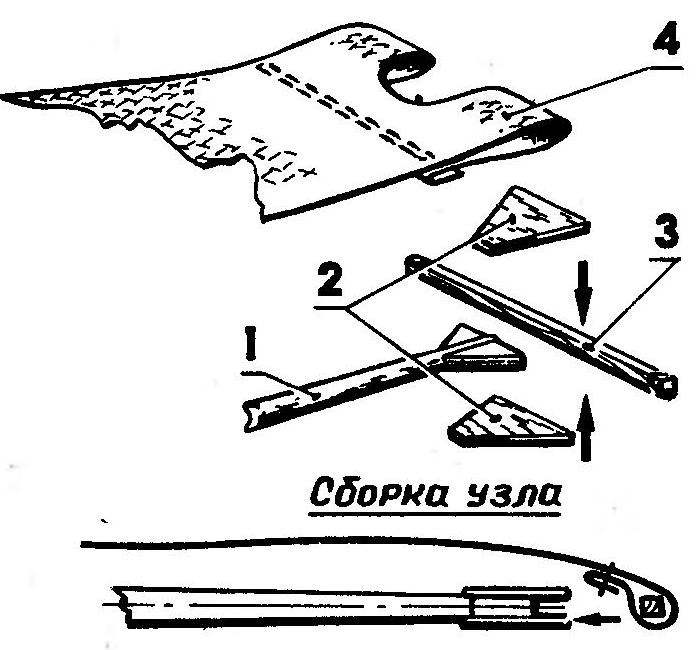 The tail node connector:
1—Central pivot 2— gusset plate (plywood or cardboard), 3— cross rail (pine or spruce with a cross section of 3 mm; in the Assembly of the serpent is laid with worn plating-“sail” in the groove between the rails), 4— the tail part of the “sails”. 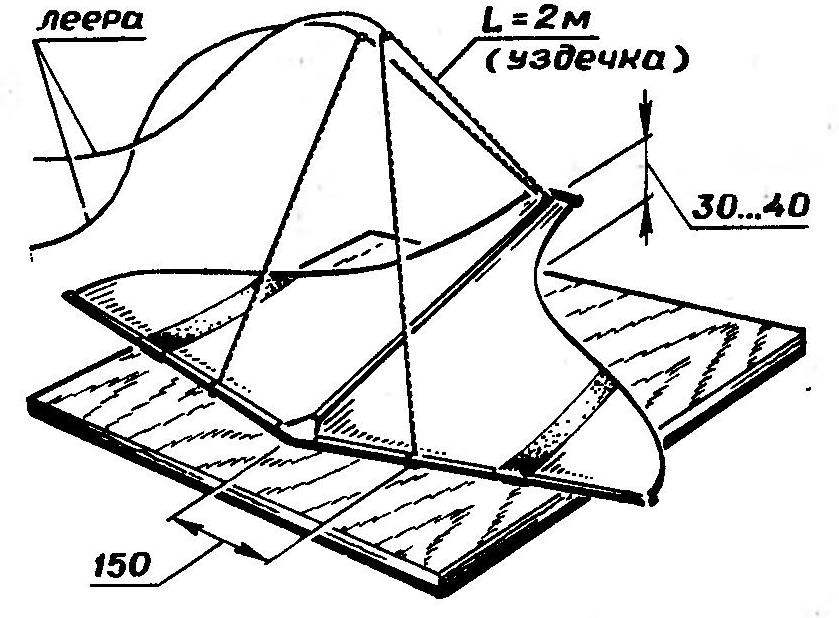 Balancing snake n the size of the frenulum.

An approximate complex of maneuvers for learning:
1— square loop, 2— round loop, 3— “hourglass” 4— “flower”.
How to tie a tie shown on the drawings. The suspension point of the rails the bridle is sought in a practical way. Successively intercepting the bridle, make snakes that touched the floor spout, would have raised 30-40 mm tail section.
Launches at first is best done in a strong enough .the wind. The fact that having no management experience, with a small stretch of rails did not cope with the “pilotazh”. Leer with a length of 30-50 m is made from durable thin thread. Nylon with all their advantages, it is better not to apply — they are too flexible and the management team runs with the big delay.
Completely mastered the snake, try to change a little the size and weight of his tail for improved handling characteristics. Otherwise the elasticity and firmness of the power elements of the serpent accurately matched to the data and control using the handle “scope” of about 300 mm.
V. SHUMEEV, engineer-aerodynamicist