…From the hold model is extracted something like a spoon with fixed candle candle. He lights the match, the wick flares up with a bright flame, and “spoon” is lowered into the hold of the boat. The model is carefully placed on the water. The moment you hear the first click, followed by the second… a few More seconds, with rhythmic roar, resembling the sound of an internal combustion engine, “torpedo boat” slowly floats on the water surface.

We attended the testing of the model with propulsion engine, developed by A. A. Kolotovkin, the head of the ship route from the city of Klintsy Bryanskoy region. The boys — his students love to make these toys. Attractive, self-propelled model has no engine in the conventional interpretation of this word. And is called the motor a small box — copper with two copper pipes! Especially that it still does not move.

This engine is not a novelty. Once a boat with such “engines” were even sold in toy stores, and the older generation should they remember. But today it is tempting to use models so reliable and easy engine, a resource which also is almost unlimited. For simplicity of manufacture it is to any comparison does not go with microelectrophoresis or internal combustion engine. Only, perhaps, the lack of a small capacity, so don’t expect a homemade boat high speed.
With the engine and start production of the model. Tin or ton copper sheet will valloton detail, in a form similar to a tray. Is the future of our water boiler propulsor. The lid of the boiler is the membrane that sets the rhythm of the pulsations of steam and water; for it will need a bronze or brass foil of thickness 0.1 mm. Solder the lid to the boiler it is necessary to form a completely sealed cavity: otherwise the engine will simply refuse to work.
And the last thing we need is two copper or brass tube with an outside diameter of 6 mm, they have to be inserted in holes drilled in the bottom of the boiler, and solder. 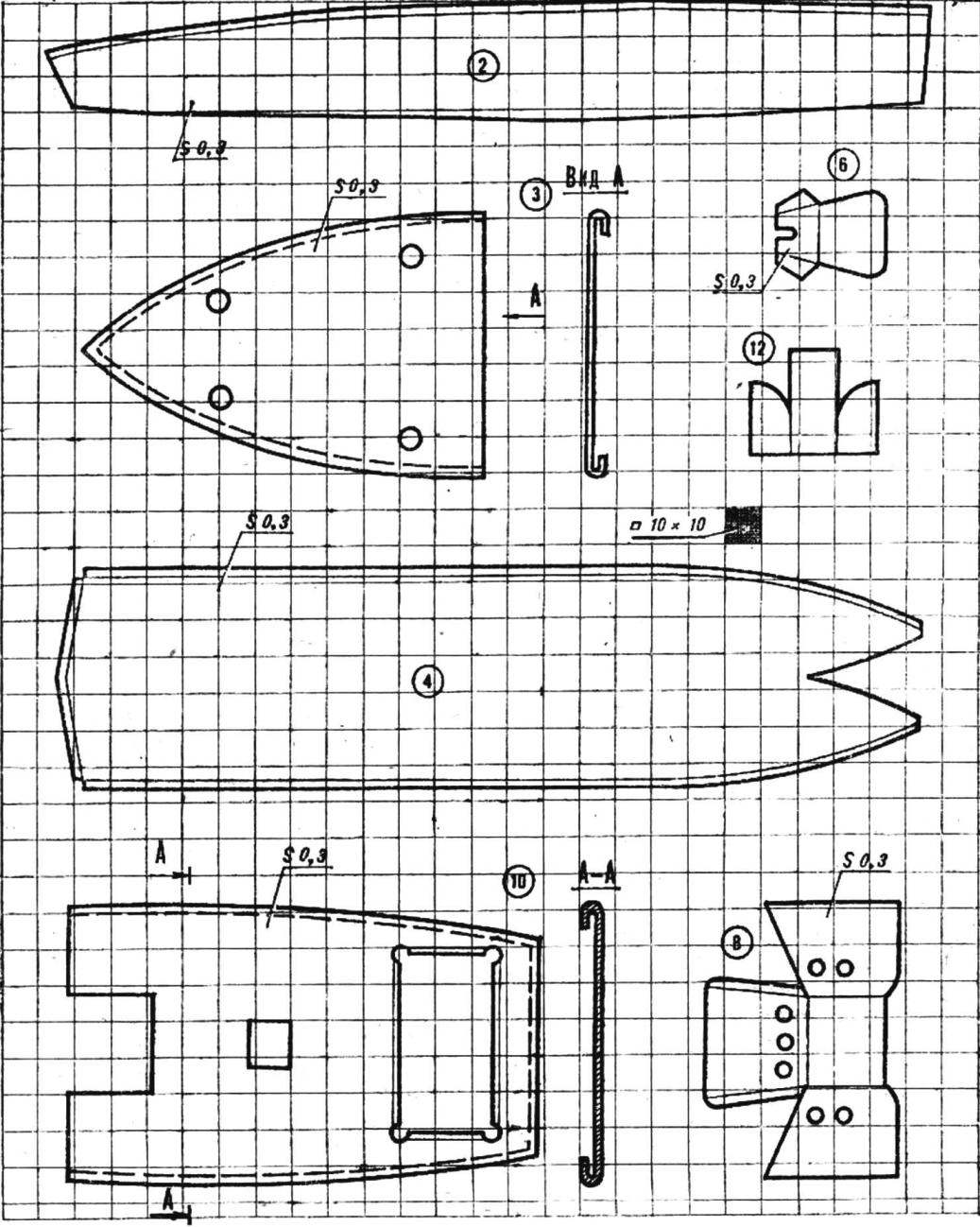 Model torpedo boat with steam pulsing engine:
1 — pot with lid, 2 — side, 3 — the forward part of deck 4 — bottom 5 — gun barrel, 6 — gun shield, 7 — vent 8 — deck, 9 — tube torpedo tubes, 10 — removable part of the deck, 11 — burner, 12 — vent pipe, 13 — pipe of the engine.
Now for the body of the model. It can be made out of sheet metal. Will go to the cause even cans, it is only necessary to cut them from the bottoms and carefully straighten the metal.
Do not rush immediately to lay out the contours of parts from sheet metal. First, select the method of Assembly. The easiest thing to cut out individual parts to bend flanging and bending at the place, to solder the joints. But simplicity is a deceptive thing using this method, it is very difficult to make a beautiful case will inevitably distortions, bulges and dents, which are almost impossible to correct. Somewhat more complicated, but much better housing Assembly on a wooden disc. Pick up the piece of wood and treat it according to the dimensions of the body. On one of the faces of the bar corresponding to the deck of the hull, to mark his planned projection and cut away the excess material. Now ka side surface of the workpiece, draw a “profile” of the housing — side projection and re-treat the material according to the unwinding. It remains to apply a line side and a diametrical plane, focusing on them, it is possible to obtain the profile of the bottom.
After the initial (rough) machining of the blanks, strip her rasp, and then sandpaper. Using the drawing tester, carefully check the symmetry of the part.
Now the patterns shown on the drawings, cut out the tin blanks. Don’t forget to leave allowance will be removed after the final adjustment. To fix body panels on the blank best small nails. 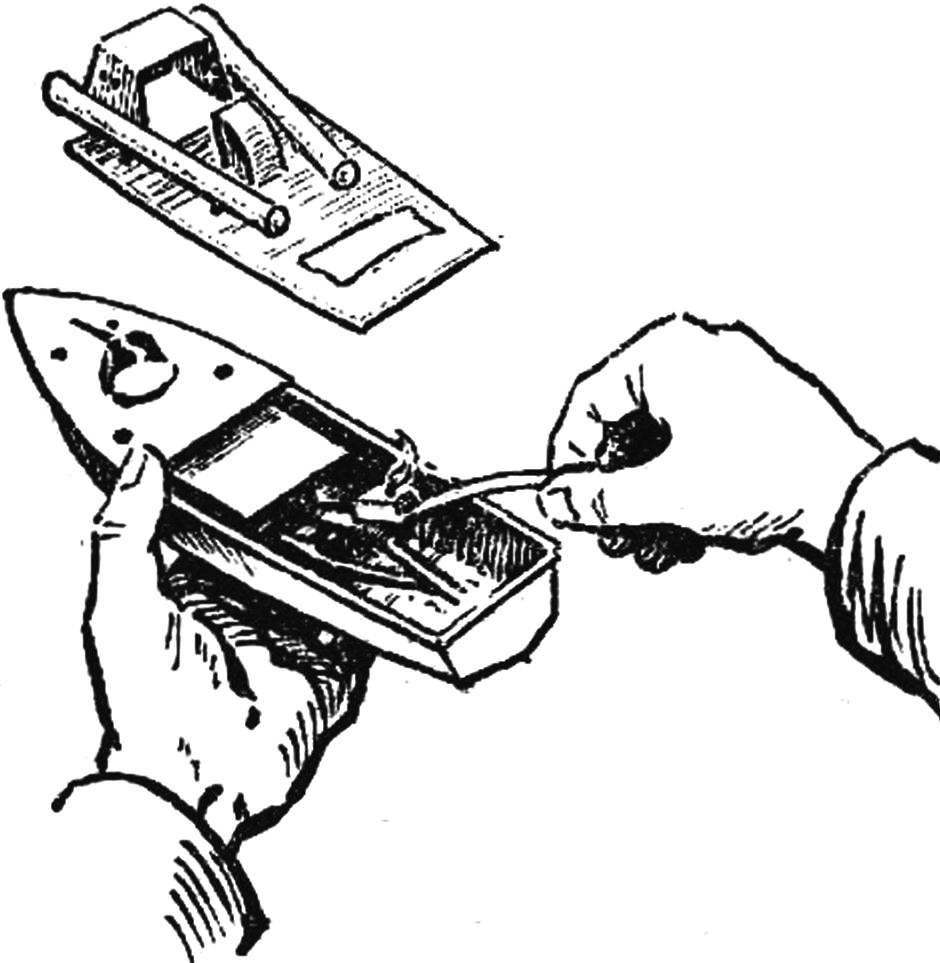 So “insert” is inserted into the body of the model.
Finalizing the parts, start connecting. For this you will need solder, a tin (or rather tin solder tratnik POS-40) and rosin. Before soldering, carefully saludito the joints at tip of heated soldering iron need to get some solder, rosin and then several times to hold a soldering iron on the test. Ka it should stay shiny tin “track”.
Now tightly squeeze parts to, once again enter the solder on iron tip and slowly slide it across the joint. That’s all. The parts are connected.
After finishing work, carefully remove the fixing nails and sealed the hole. Remove the housing from blanks and check for leaks — pour in the water. Find the leak, draw this place with a pencil and once again carefully probajte joint.
All other parts are much easier to make — just cut out the pattern, bend and solder the seams. Please note that the front part of the deck is soldered to the housing, and the rear just approaching him and fixed only on the flanging.
Now need to install the “pot”.

The sequence of preform fabrication:
the layout of the planned projection, marking side view, markup, and processing bottoms.
To do this, in the back of the bottom drill two holes in the tube propulsive engine. Before soldering their curve, as shown in the figure. And the last thing you need to do is “insert”. It is also cut from sheet metal.
Before painting the model cover nitrogenatom. The bottom to the waterline — green above, grey, ball. Deck — brown, the color of iron oxide.
Before running the model, put in “furnace” candlestick candle or a pill of “dry alcohol”. Put the model in water and then pick it up and tilt the nose down to “boiler” got a few drops of water. Now put the model on the water, light the “furnace” and put it in the case. A little patience, and “torpedo boat” will surely move forward.
This model is just a curious toy. However, it is kind of a hint to the hobby; can you make this engine more powerful on so that it can be installed on a “solid” boat? Readers expect sentences that have passed experimental verification.
I. SERGUTIN