In Newspapers and magazines, no-no, and appeared as curiosities, pictures of miniature models of sailing ships, sealed in the bottle. I always looked at them with admiration and envy, but in the nature of such or similar products never met.
They provided me a magical effect. I involuntarily imagined the old pirate with the earring and a parrot on his shoulder, in the end, “dropped anchor” on land and whiling away the time in a longtime hobby: the former a gentleman of fortune resurrects in miniature with the tested sharp knife your favorite pirate brig.
I’m seriously thinking about how to implement the idea and to assemble the sailboat in the bottle with their hands. But understand: to make a model of a boat is not easy to do it in miniature is more difficult, but to infiltrate it with all the mast and rigging through the neck of the bottle is almost the same as for a camel to get through eye of a needle. So how did this is done?
The pictures prove that someone somewhere in our days repeats the pirate gimmick, but information on the question interested me to find and could not. Had to “reinvent the wheel” and to only think of yourself.
And now, after a long painstaking work I hold in my hand a bottle, inside of which is a miniature brig. Let its appearance simplified but, nevertheless, his bowsprit, like a real sailboat, directed forward, slender mast up and sails ready to take the wind.
And… I now also know the secrets of the old pirate and is willing to share them.
The main secret of the hull structure of the model is that the number of Assembly elements, and therefore the number of connectors in it — minimum, but each element must pass through the neck of the bottle, clearly locked in place and could be glued. The Assembly sequence has a strong certainty, from the most remote elements to the middle, from bottom to top.

Assembly operations should be simple: grab an item; to stick in the neck; turn and reinstall; press for bonding. Of course, all of the Assembly units must be completely decorated with visible (after Assembly) side, and the mating surfaces of neighbouring elements is well adjusted. For a fastening of details it is best to apply PVA glue (polyvinyl acetate). He grasped relatively slowly — in the case of inaccurate connection of details to improve some things. Dries, the glue becomes almost colorless and substantially reduced in volume, reducing the amount of joints that petite model with lots of connectors is important. A weak solution of glue (diluted it in water) is suitable for pre-impregnation of fibers, simulating the rigging — they become tough and elastic, greatly facilitating the process of hanging, and creates the illusion of a stretched gear. Edges of the sails, saturated with the solution before they are cut, will not lohmataya.
Still pondering the plan of implementation of their venture, I realized that no one pirate with a knife could not do anything. What and how he got the brig inside the bottle? And this secret has affected the main Assembly tool. It had to do special: something like a miniature pair of pliers on the long rigid tubular rod with a handle, which is a control sponges. The thinner the rod, the easier to handle inside the bottle. It is desirable that the tube could, if necessary, to bend, but its rigidity should be maintained.
The result was made a tiny mechanical paddle manual control. In the process of assembling the casing remain stationary relative to the bottle, the necessary stocks. Its design depends on the shape of the bottom of the sailboat and the selected method of Assembly. The main thing is to he rigidly fixed a model in the “even keel”, and after Assembly freely and without damage to the product was removed from the dish.
I made the frame out of duralumin strip with a thickness of 2 mm. It consists of four hinged units. In the first line is made a slot, in which is inserted the tab (bottom part of the hull with the keel, rudder, bow and two lateral substrates”frames”) of the front part of the keel.
First collected layer by layer the body. The plates are cut out of wooden rulers student: their edges successfully mimic boards covering the sides of the sailboat. The case is also made detachable by diametral plane, connecting both parts of the two “frames”-cross members. On the body set in advance is made and finished add-ons, ladders, boats that are made of the same rulers. On vinyl decks before coating them with varnish slotted longitudinal risks, simulating the grooves of the flooring and at the same time masking the longitudinal technological connector. 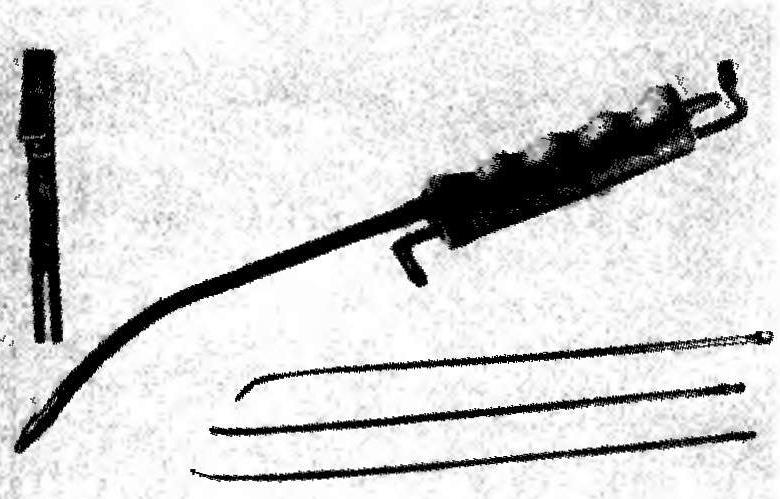 Stapel and a set of tools
To fix or lock in a certain position of the individual elements, spot gluing and pressing the Assembly units to one another is best to use a special tool — curved Cycling (or knitting) needle, and even a few spokes separately for different operations.
After Assembly of the housing model can be mounted in a “project” position, gluing it to the glass with epoxy (although I didn’t do it), and the slipway to retrieve out of the bottle.
Installation of sailing arms of the model — the stage that requires a lot of patience, accuracy and ingenuity. Rational to do this work “Domachevo” and comprehensively. Yards, sails and rigging belonging to one mast, collected it outside the bottle. By the way, good material for mast served as ordinary matches. Then, wrapping up the sails with the sheets, halyards and reamy around the mast, pushed the resulting “roll” through the neck. Put into the prepared socket of the mast and gluing the bottom ends vant, alternately spread out and finally fastened the sails and rigging.
But it just is not always obtained. Much depends on the type of rig, size and shape of the chosen bottle. The flat bottle flask mount tackle more complicated than in the round, but a sailboat it looks much more impressive, occupying almost all of its interior space, pushing against the walls NOCs Rey and truck of the masts. Therefore, in order not to create undue hardship (and it will be enough!), when you build a model inside all that could and should be done outside the bottle.
Before sailing fleet sailors knew how to knit not only nautical knots. They were able to weave the ends (cords, ropes) a lot of “sensible” things: mats, fenders, etc. Is something akin to knitting, which lately even men, trying to calm my nerves. Historians say that knitting was fond of even Napoleon Bonaparte. The Assembly of the sailboat in the bottle not only the best way to calm the nerves, but also perfectly strengthens the will, because… but all this you will feel it yourself when you get down to business.
If you have kids, they will love watching the work and an introduction to the birth of the little man-made miracle. But the most interesting will be ahead when you finish your “Titanic” work. Looking through the glare on the glass on the finished boat, you will want… to give. It does not matter who — man, woman or child. What matters is that he, like you, loved the sea, waves and wind.
M. BULYCHEV