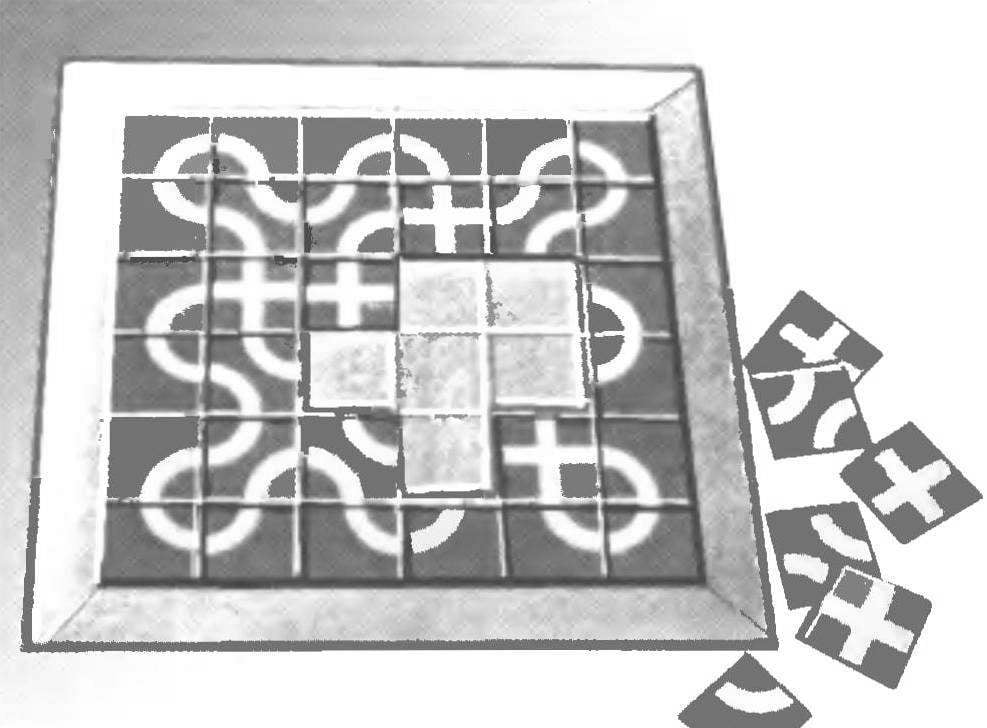 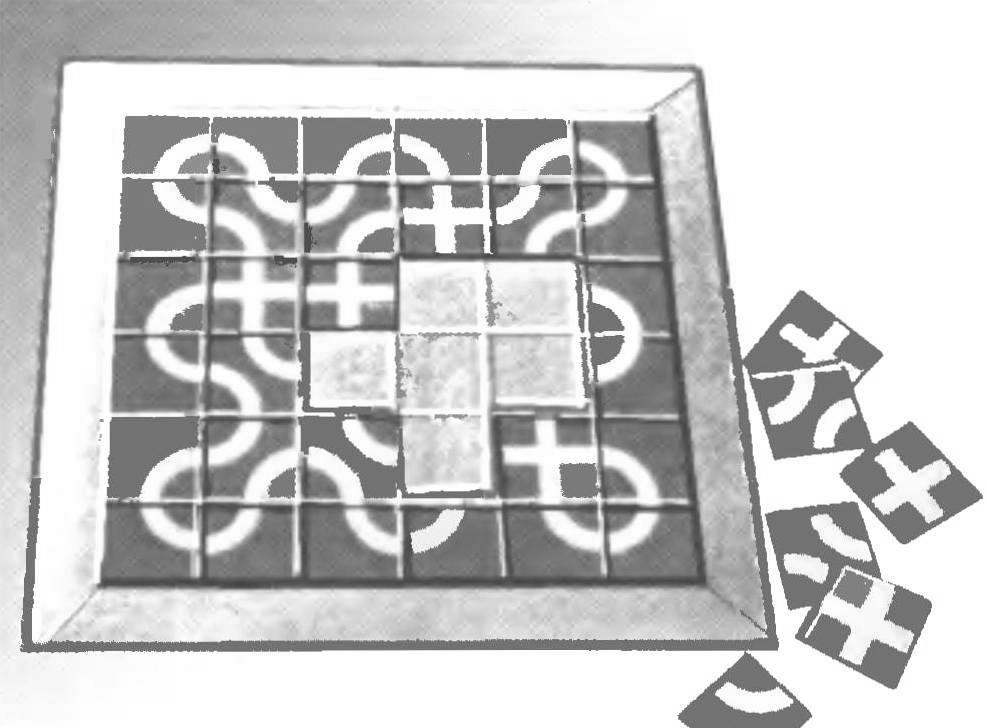 This game is somewhat similar to both Domino and popular today at children’s jigsaw puzzle “puzzle”, when of curly plates add picture. Only here plates without cutouts, like dominoes, but at a certain folding them too to get a picture-the pattern. For this purpose, the plates are applied over lines — but their is enough to get a variety of patterns.
To make the game even to the child, because the baseline is very simple, and to apply them to any sheet material, from conventional or wetmanski paper to linoleum.
So, take the available sheet and draw on it a square of any desired size. Now letís trace out the General him to get the same six vertical and six horizontal bands. It will be the playing field — the tablet. The edges can be turned over with limiting lines in a frame.
Now take the second sheet, raschertite it is similar to a square and cut it along the lines of markup — get 36 equal square pieces. Applied to them only three patterned bands: “cross”, “arc” (as if connecting the two ends of the cross) and “double arc” (like the first, but like a mirror reflection). The ends of the strips must be exactly on the middle of the sides of the chips. First, the cross-pattern should be applied to 7 chips; with two arcs on 9 chips; the remaining 20 are marked with one arc. This amount will be enough to put pieces of a variety of intricate patterns. Their diversity can be judged by the examples given here.

Fig. 1. The game “Fold pattern”:
1 — the playing field — plate; 2 — placing the square of the chips are coated with patterns 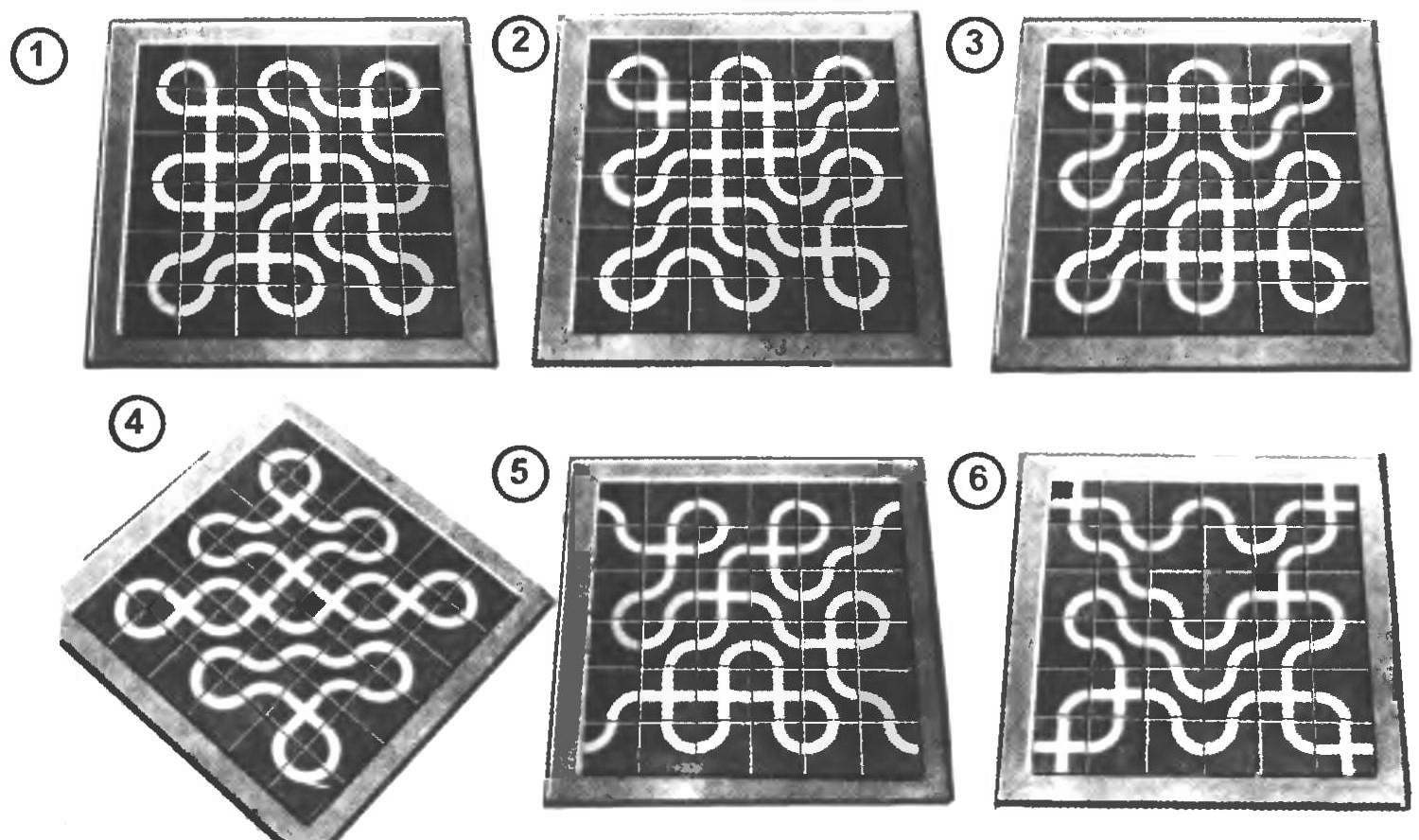 Fig. 3. Versions of the patterns:
1 — “a continuous snake”; 2,3,4 “double snake”; 5,6 — “broken snake”
The first option could be called “continuous snake”; line chips, connecting, formed not repetitive and confined to a single track patterns. The next “double snake”; the line is also closed, but, looking closely, we see that the pattern is not one or two of them and both are continuous Finally, the last options is “broken snake” their ends are not closed; at first glance it seems that a lot of snakes, but on the first Board there are only two, and the second four.
Of course, these examples do not exhaust the options of folding the chips and the resulting use patterns. Find to make your own is an exciting experience not only for children.
In addition, the game is also interesting in that it develops imagination, develops perseverance and has a calming effect on the restless.