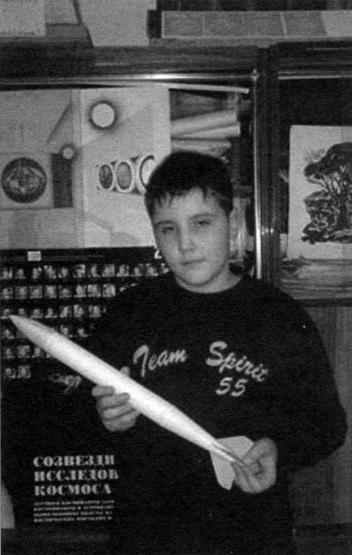 With 2010 came into force changing the rules of competition flying the sport in Russia. It touched upon the technical requirements. Continue the body of the model rocket for flight duration in boys up to age 14 must be made of paper.

I must admit that “rocket men” of Moscow, Sergiev Posad and Elektrostal long time to build and launch the model out of paper. They are technological in the manufacture, the main material is ordinary writing paper for printer and copier 80g/m2 A4.

Before you start working on the sports “equipment” necessary to make a mandrel. Them four. The material for them you can use any (plastic, wood). But it is better to carve them out of metal (and working surfaces should have a surface finish of about 6). For flying mug numbering 12 — 15 people you must have at least two sets of bars, four in each.

Where to start? Fundamentally doesn’t matter. The most difficult part of the model is fairing. Let’s start with that. The mandrel is heated slightly, then grease its working surface (it is the ogive shape) sexual mastic “Edelvays”. In the absence of such, you can apply wax or paraffin. The resulting layer will serve to prevent separation of gluing the paper to the mandrel.

After this operation, allowing to cool the mandrel, glued on her paper petals. Their shape resembles a cone with parabolic sides with a length of 110 mm and a maximum width of about 28 — 30 mm at the base. One fairing they need at least five. The width of the joints when gluing will be about 5 mm. To work all the petals are immersed in water for 5 — 10 minutes. Giving wet paper, start gluing. Soaked petal placed on a sheet of paper, soak a cloth excess moisture, grease it with white glue and applied to the mandrel. Smooth petal with your fingers throughout the area, pressing it to the surface of the mandrel. Then in the same way the blend all five petals, getting we need the fairing. After drying, the seams are sanded with fine emery paper and coated with two layers of nitrocellulose lacquer.

For removal of the cone from the mandrel and heated it to 50° — 60°, put in the oven or on the hotplate. As soon as you start to melt dividing the mastic, hold the mandrel in the Chuck of the lathe or in the vise and remove the shaped fairing, turning it at the same time. Next — torches fairing to the desired size — 95 mm. It can be done on the same mandrel, or on such another, but carved from wood. In the first case, it blunts the tool and the end face of the fairing may be uneven and fluffy. And given the fact that one is not a fairing, it is better to use a wooden mandrel, the second option.

Skirt fairing sticking to the mandrel with a diameter of 39.7 mm, the length of the blank to 130 mm, gluing on “the Moment,” joint width — 5 mm. Fastening skirt in the fairing with PVA glue, the width of the belt connection 5 mm, for reliable bonding some time a skirt should not be removed from the mandrel. After 15 — 20 minutes in the free end of the skirt of the insert frame out of foam, previously stipulating a loop for connection with the threads of the suspension.

The body is made of paper blanks with a length of 260 mm and a width of 133 mm, the mandrel diameter of 40 mm. the Blank is wrapped around the mandrel, along its long side to apply the glue “Moment” at a width of 5 mm, attached to the edges and pressed them along the seam. After 5 — 10 minutes, the seam is ironed with a warm iron (temperature control iron set on minimum temperature “nylon”) and allow to cool a little glue on the connection.

Similarly glued and the tail housing, which torches length of 146 mm on a wooden frame. Thus the place of circumcision in the smallest diameter should measure 10.5 mm.

5 — thread mounting of the rescue system;

The connection of the hull and the tail cone of the primary mandrel. On the final part of “put on” tail element, then the same side “dress” the body of the shoulder of at least 2 mm. the Outer part of the body (about 3 mm) lubricated with glue “Moment” and move the body in the opposite direction for 3 mm crimping circumferentially and ironed with a warm iron. The width of the belt connection is obtained with 5 mm.

Unit MRD consists of two elements: the frame and the container. Frame thickness 3 — 5 mm machined from foam, outside armorum glue “Carpenter”. The glue container on the mandrel with a diameter of 10.3 mm from strips of paper length of 50 mm. On one edge fastened to the frame. Fasten unit of MRD in the tail case with glue “Joiner”.

Stabilizers (three of them) is made of balsa plate with a thickness of 0.7 — 0.8 mm, sidewalls for stiffness armorum epoxy resin. With its help fasten the stabilizer to the tail cone. One of them glue and thread pendants model, the free end of which is tied to the loop of the frame of the head fairing. The entire body is then covered with nitrocellulose lacquer.

The model preparation for the start of the produce in such sequence. In the tail part is fixed mrad, in case put on top of the wad (paper cylinder with a length of 50 mm with glued bottom) and stack recovery system (parachute or ribbon) and put a little talc. Insert the top fairing.

The mass of the model without MRD and rescue system — 8,5 g.