Control line racing model class 2.5 cm3 designed and manufactured in a self-similar laboratory of the Palace of pioneers and schoolchildren of the Pervomaisky district of Moscow under the leadership of A. Pyatibratova. Model — winner of national Championships in 1977-1978. Designed for engine KMD-2,5, diameter of wheels 80 mm. With properly adjusted and well firmed engine model of this type at speeds of about 170 km/h Special attention during development was paid to reliability of all units.
Traditionally, the design began with sketches of the General form and layout of basic units. Long-term experience of sea trials showed that the most reliable is the gear box type with spaced bearings, not the console, which is due to the small distance between the bearings, they fail frequently, which violates high-quality work gear. From these considerations (reliability) of the gearbox housing is made of steel 45-normalized. The body is made from two halves and has a connector on a horizontal plane. Recorded half with three pins Ø 2 mm and four M3 screws. In the case of the bored holes for the bearings No. 1000 096 driven gear. Bore bearings made on a jig boring machine after Assembly of the housing halves of the gearbox. This operation can be performed on the faceplate of the lathe with a rotary fixture. However, in the latter case, it is difficult to achieve precise alignment of axes. Gear Assembly and adjusting the meshing of the gears must be made “in the paint” under the supervision of experienced mechanics. Reducer after Assembly m flushing has a smooth ride with minimal gaps in engagement. The axial clearance of the shaft Assembly must not exceed 0.05 mm, it is also very dangerous “pinching” the bearings.
In this model, used gear 38ХМЮА steel, nitrided after final machining to a depth of 0.1—0.15 mm with the subsequent lapping of seats PBBs bearings. Number of teeth: Z1=14, Z2=27. Hardness — NRc=60.
Gear suspension type. The tail part is installed in guides between the two springs working in compression.
The rear wheels of a folding type attached to the shaft of the drive gear with split cones. Collapsible design, in our opinion, the most perfect, simple to manufacture, apparently, so many of the leading modelers use it on their cord. Wheels can be mounted on the hub, and the hub — shaft by means of cylindrical dowels and screws M4. This mounting option improves the accuracy of wheel alignment and allows repeated Assembly and disassembly of the gearbox. 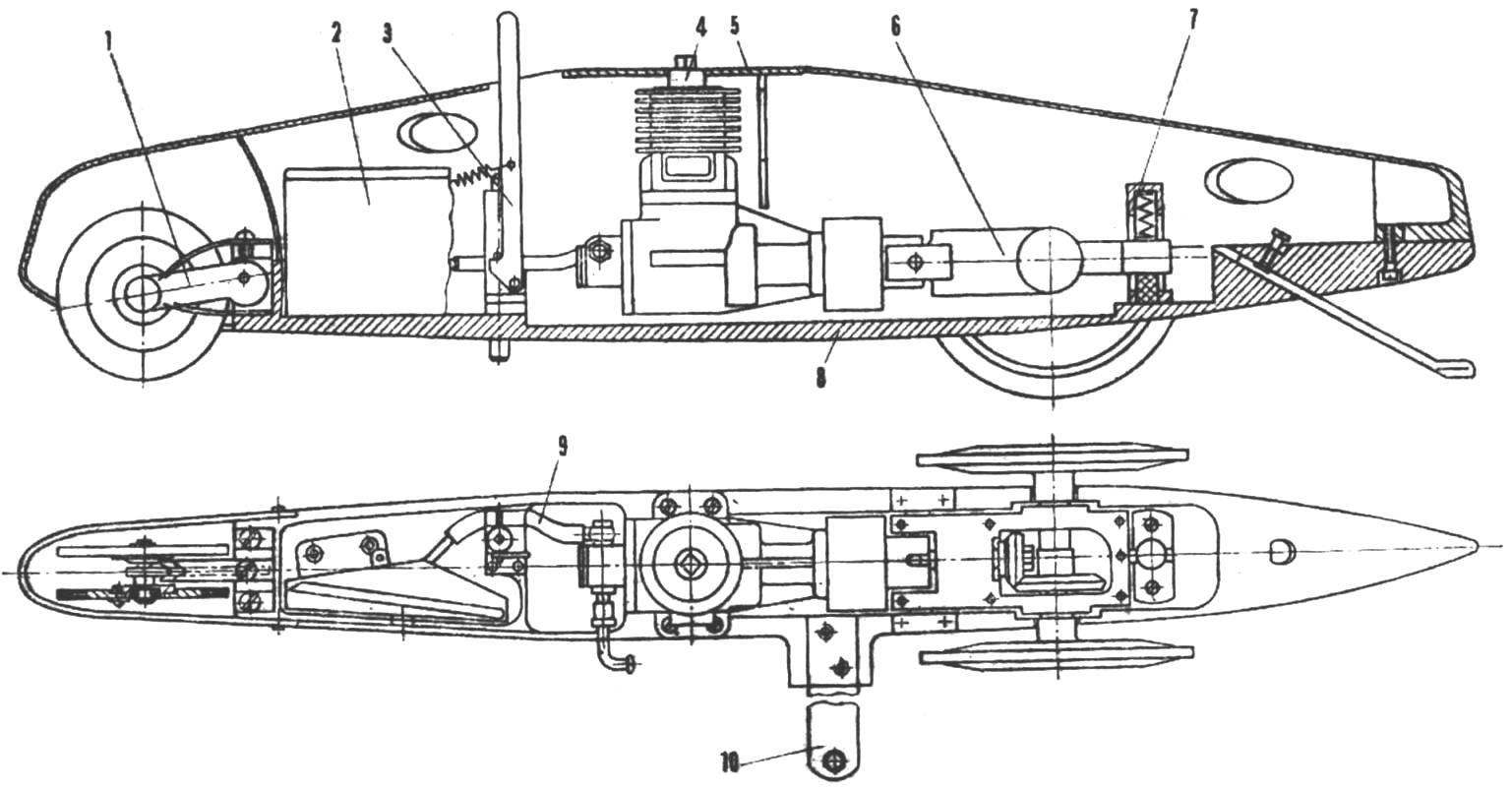 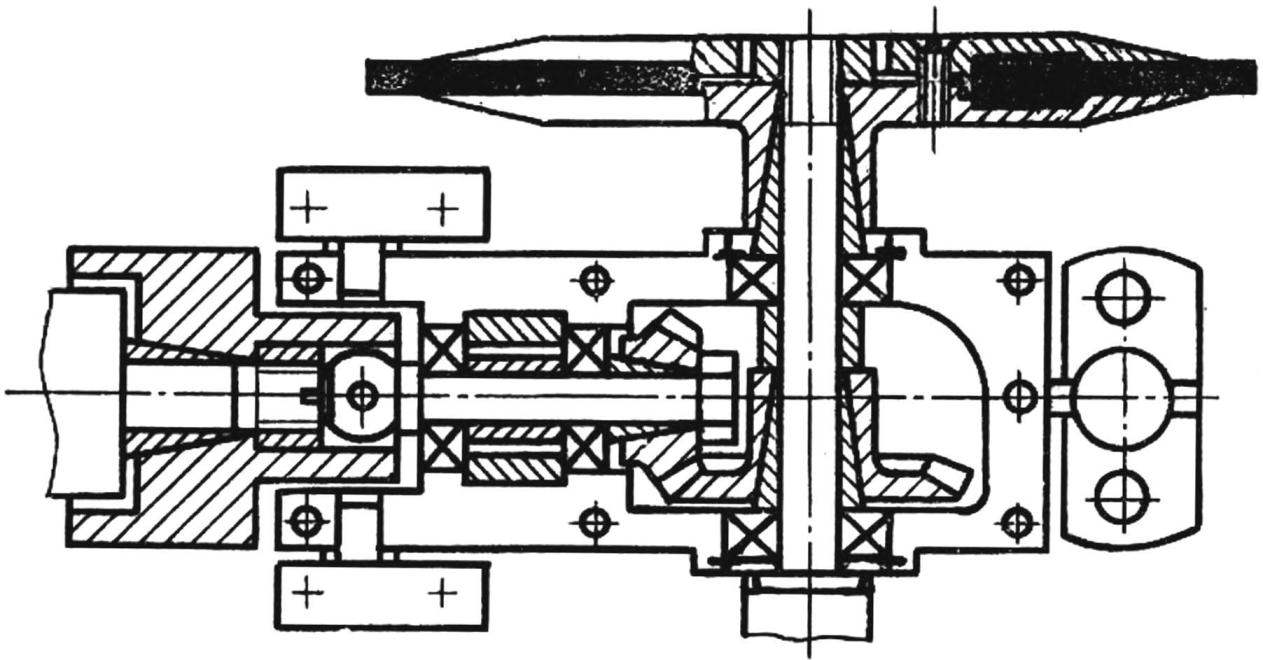 The layout of the gearbox. 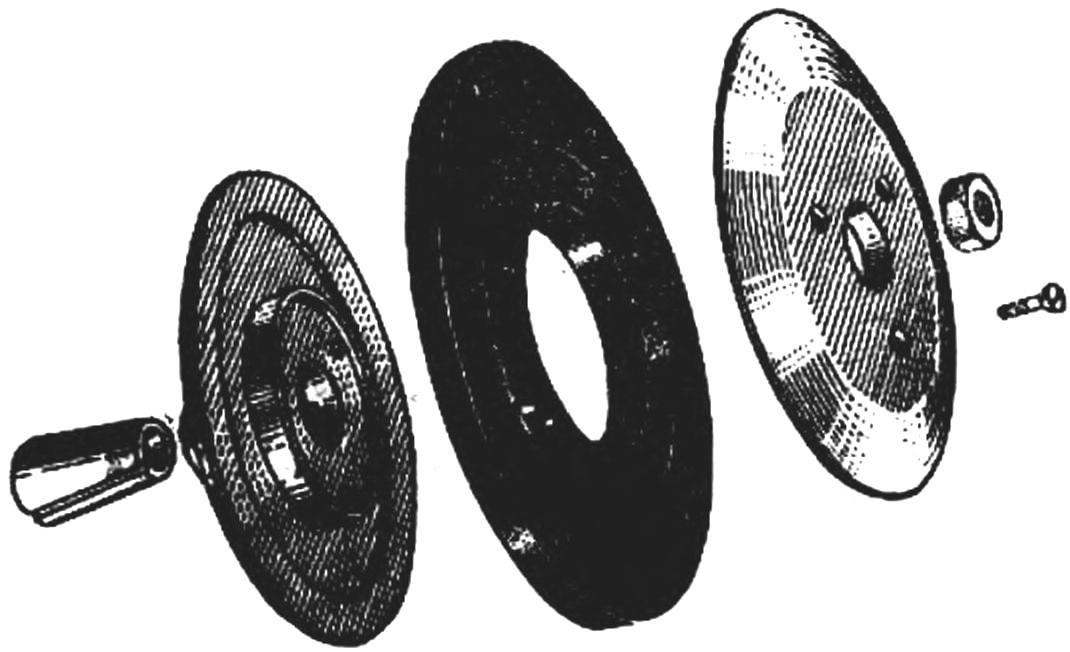 The rear wheel in the analysis.
Front suspension is a cantilever type. Wheels are disposable, made of sheet duralumin, which, by means of lakomata devulcanization rubber layer with a thickness of 4-5 mm. the Front wheels are mounted on this-the people, and made them boring for bearings 4X9 (two in each hub). Tank model — open type, made of tin with a thickness of 0.3—0.5 mm. the Outlet of the feed tube out of the tank coincides with the longitudinal axis.
Tray — lower part of the case — made after they are ready all the components and assemblies. On a milling machine from D16T, Д1Т or aluminum-magnesium alloy AMG-6 the pallet is milled according to the preliminary layout. Special attention should be paid to the concentricity of motor and reducer, this will facilitate the Assembly and alignment. It is also advisable to install between the flywheel and the gear of the intermediate driveshaft, the distance between the studs may be only 12-15 mm.
The fairing model is laminated of fiberglass with a thickness of 0.3—0.5 mm with epoxy resin on the blank, are placed inside spacer from aircraft plywood. The fairing is painted after treatment with nitro and varnished. The lower part of the hull sanded and polished with paste GOI.
A. PYATIBRATOV, master of sports of the USSR