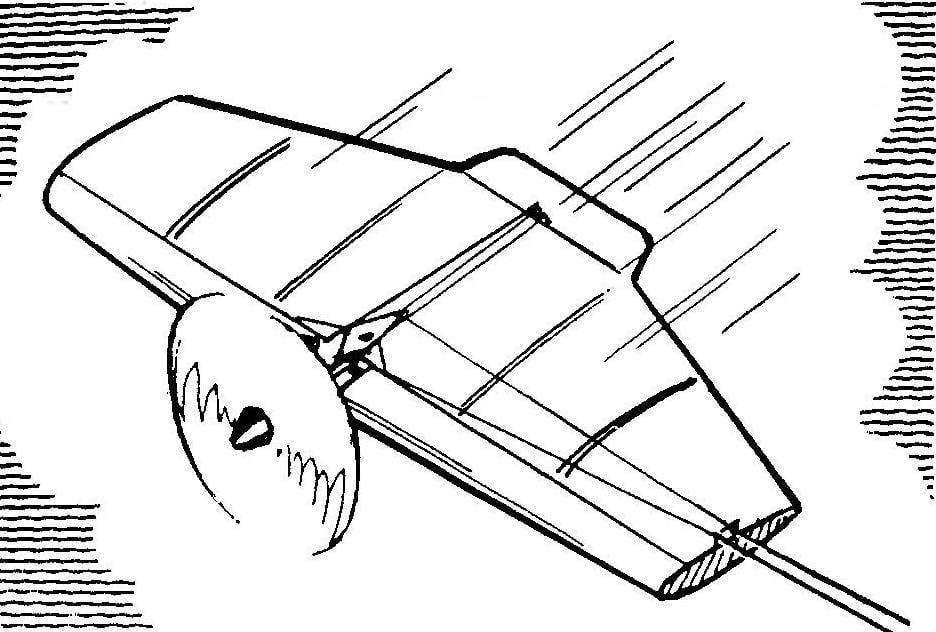 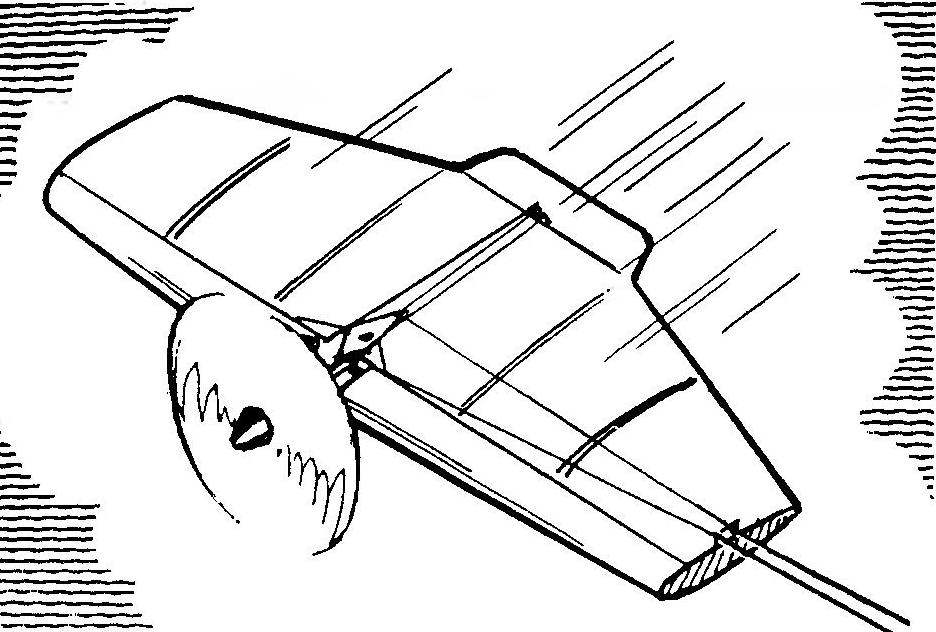 In our circle beginners-students who have gained initial skills training cord model engine MK-17, traditionally entrusted with the Assembly of models of air combat with the same engine. In this sports class is most often used layout type “flying wing”: lomikami wing and Elevator on the trailing edge of the wing. Spar-wall this model is made from spruce, pine, aspen or lime plate thickness of 2.5 mm, and the rear edge of the wing—rails section 12×3 mm. the Latter consists of centroplane and console parts. Joints edge definitely wrapped thread and impregnated with glue, or with rough landings inevitable failure. The wing tip is made of plywood or wood plates with a thickness of 2.5…3 mm is recommended to facilitate Their holes. If the rib is cut from plywood, the edges are not required.
The ribs are cut on a pre-prepared templates. In terms of mug is very convenient — don’t have to spend time on the layout of the circuits. Besides, ruining the workpiece, it’s easy to repartition any detail. (That’s why in the circle it is desirable to have a set of templates for all the major details: a spar, rib, tip, Elevator, Central rib, a rocking chair, scan the fuel tank, lobiki wing.)
To make the ribs can be of various materials: plywood with thickness of 2…3 mm foam stamps SS-4-40 and PVC piping with the obligatory contour thin rails or otlu whelping veneered construction plywood. In recent time there is another promising material — corrugated cardboard, which is packaged in TV, video and office equipment. This material is very lightweight, durable and well kleetsya.
First, the templates are plotted the contours of the ribs, then the excess is trimmed and the workpiece and fringes as well as foam. With this technology you can make and Elevator.
The Central rib is made of two slats (pine, spruce or Linden), between which the markup is pasted boss (in the bow), spacer rail (middle) and mating wedge (in the rear). Place bonding are wrapped with thread and soaked with glue. A ready node is joined with the side member having the grooves for the slats. Then stick the node of the motor, pre-assembled from the lugs and bars. The connection is also wrapped with yarn dipped in glue.
The spar is drilled the hole for the pipe of the engine, installed a tank of tinplate, then pasted tube. The tank is attached to the bar on Central rib thread with glue or screw the MOH soldered from inside the tank.
The rocking chair is made of aluminum. But you can use a plastic box from under engine MK-17, from the corner of the box is easy to make and the horn of the Elevator. 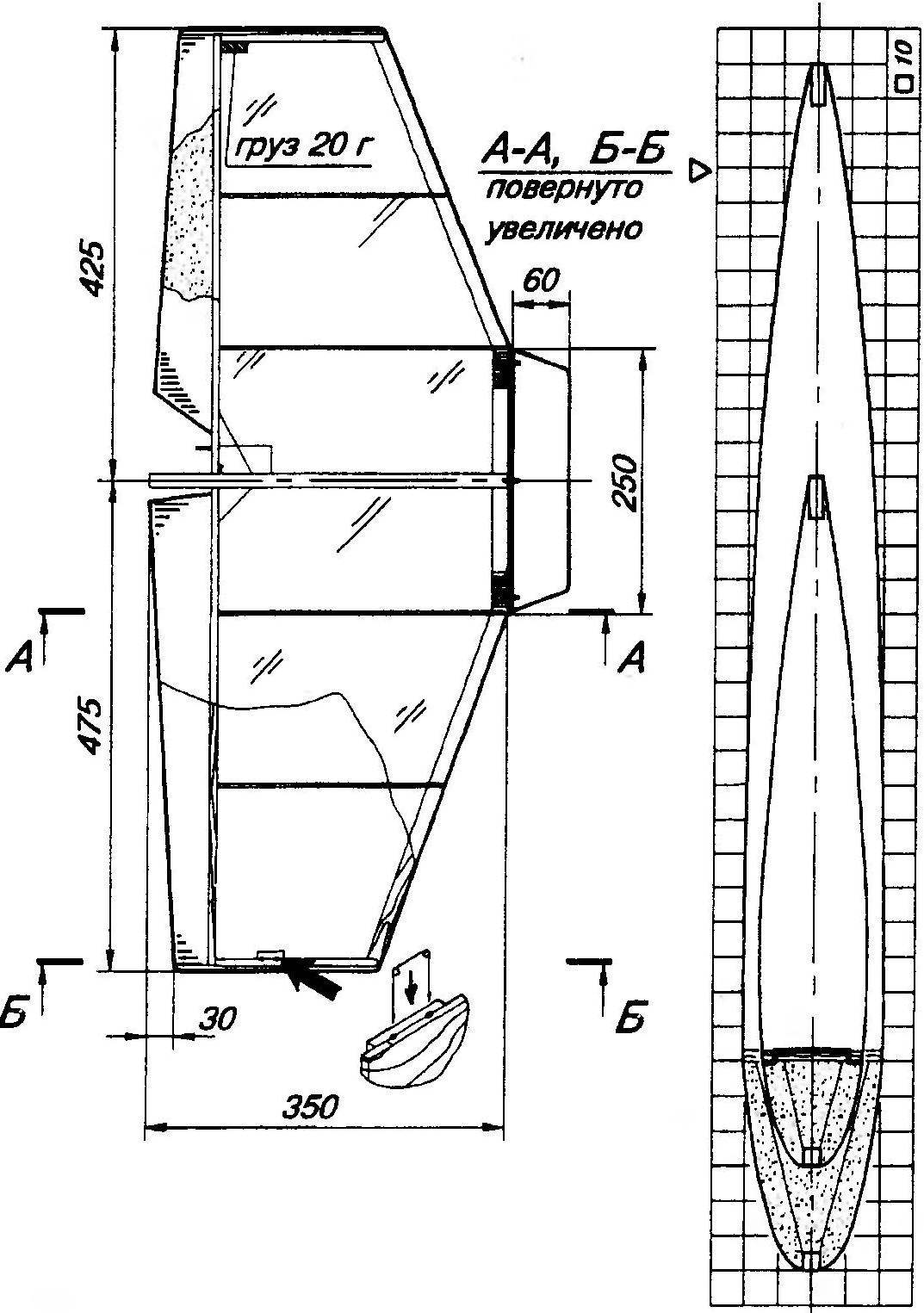 The main geometric parameters of the model. 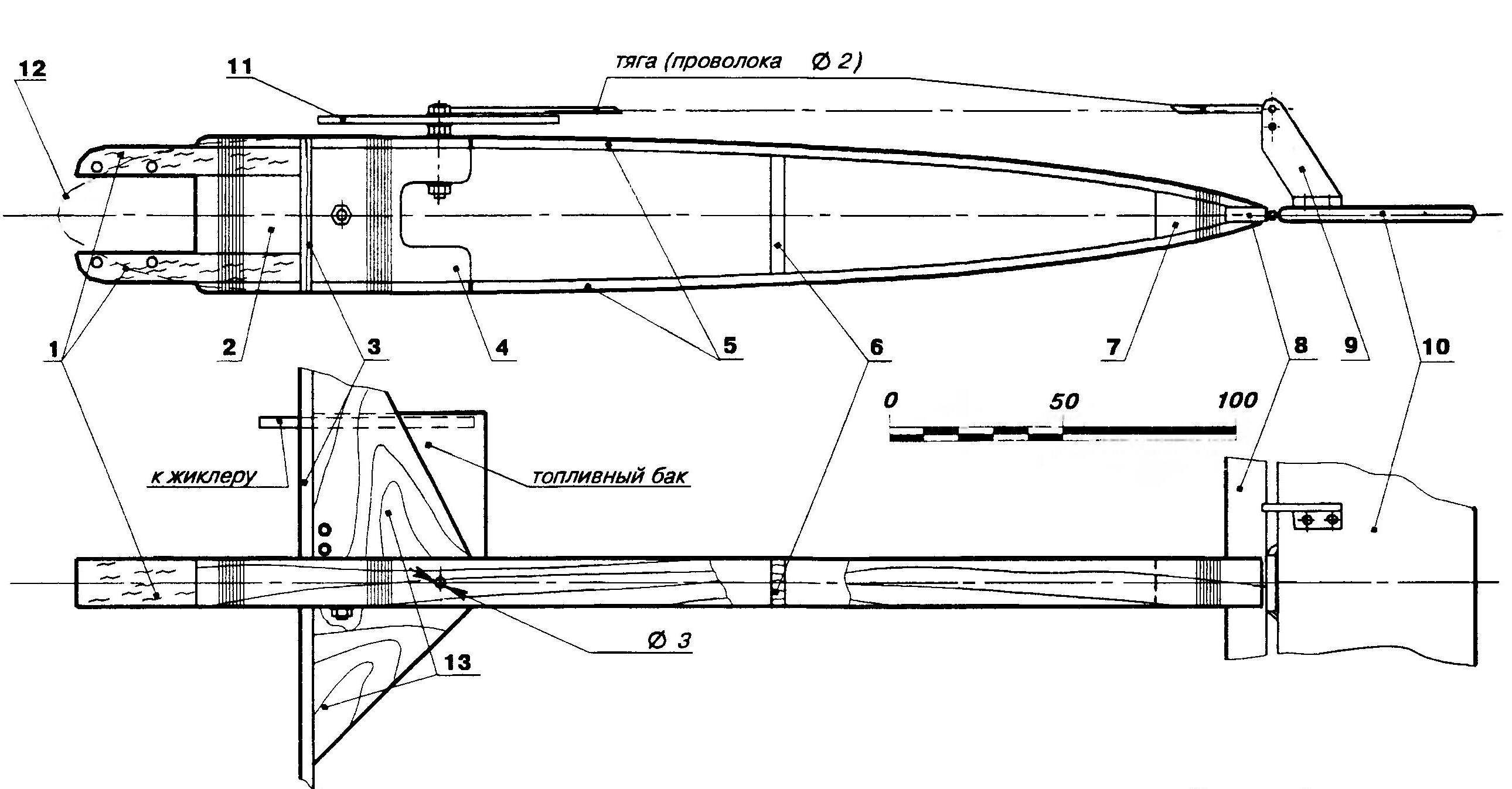 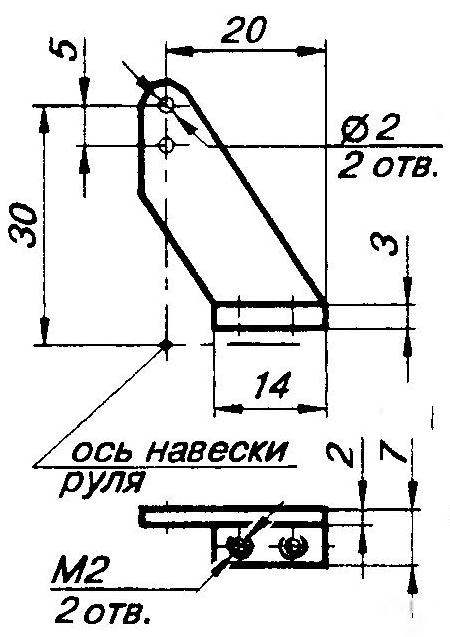 The horn of the Elevator. 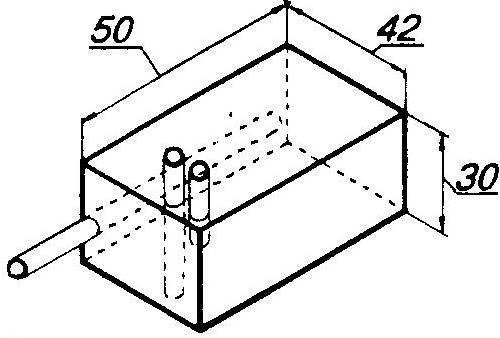 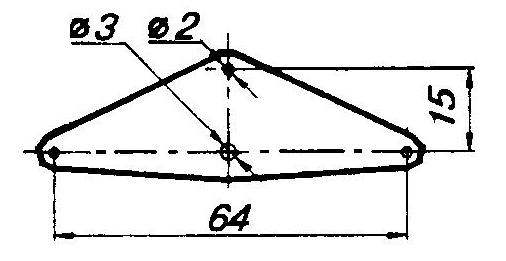 The Elevator:
Option 1:
1 — front edge (pine, spruce, rail 4×4), 2 filler (foam PS-4-40), 3 —rail to install the pig (pine, aspen, 8×4), 4 — skin (thin writing paper), 5 — rear flange (pine, spruce, rake 4×2). 6 – the ending (pine, spruce, rake 4×2).
Option 2:
1 — leading edge, 2 — layer (corrugated cardboard s4), 3 — rail to install the horn, 4 — rear edge. 5 — the ending.
After Assembly, the Central part glued to the spar rib, ending and gathered the trailing edge. The basis of the model prepared. The drawing sits bolt rocking. The frame is fitted by a Mylar film with a thickness not exceeding 25 microns, wetted with glue BF-2, BF-6, “Moment” or N-88. In the journal “modelist-Konstruktor” repeatedly and a detailed description of the technology of pasting models Mylar film, however, it is necessary to reiterate that reliability is necessary for covering the edges of the film to do podvoroty. Then all exposed wooden parts are covered with several layers of lacquer-type NTS.
Lobiki wing cut termolabil on end templates from a single piece of foam or glued together from Styrofoam plates. When choosing glue, you need to consider that this material is suitable only adhesive, not containing solvents. Ready lobiki upholstered in tissue paper or wide tape “Scotch”. The same tape lobiki and glued to the spar, so they can be easily changed with the accident.
Elevator and traction control are mounted in the last turn.
The model’s center of gravity coincides approximately with the axis of the spar. With this in mind, marks the position of the engine. For “combat” training is possible to install a modified MDS-1,5 D, with which the model shows good performance (on the modernization of this engine is not once mentioned in the publications of the journal “modelist-Konstruktor”).
N. NIKOLAEV