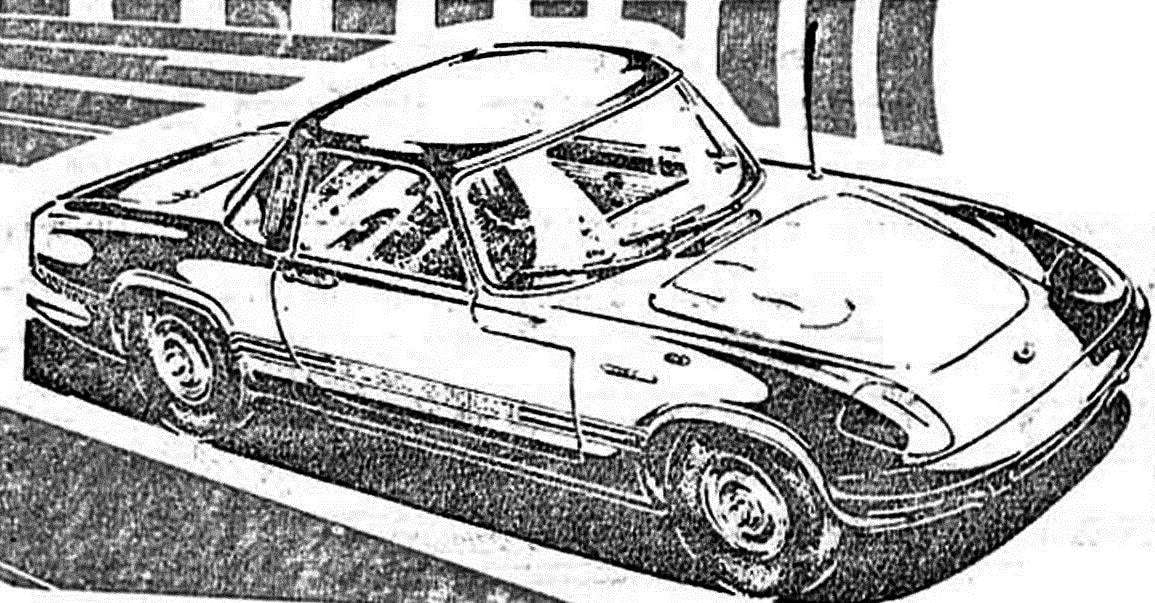 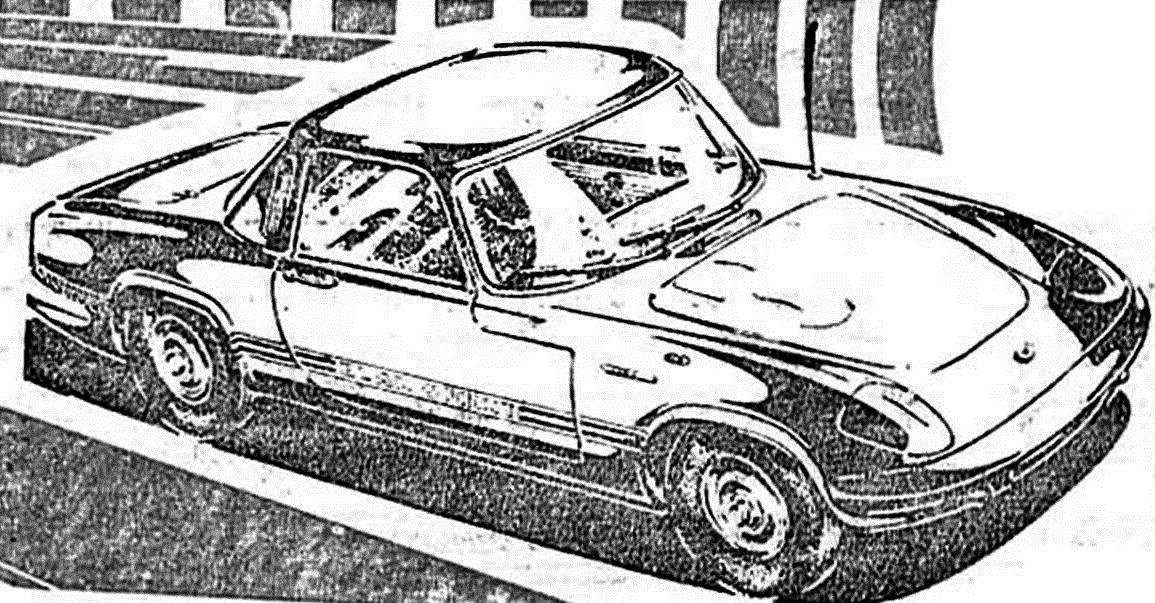 “All further race pointless… Too unequal forces!” No, dear reader, it’s not about sports. It is sad the thoughts that must have visited any is not too eminent athlete, trying to somehow keep up with the development of technology in the classes of RC racing action. No doubt, improvement of micro cars, new findings and new design ideas have transformed modern “shells” in the samples extremely complicated and most interesting decisions in sports modeling. But as attractive as such technical progress he, unfortunately, has its downside… And, having, may be much more important than continually improving the results of races, — a sharp decline in the availability radioklass. Will not talk about the problems of domestic equipment and supply good motors.
Until recently it seemed that in the end, if you are an enthusiast-a fanatic, you can spend a lot of effort, energy and money on making homemade samples. Not strong enough one to get the same as you: by working together, something will happen. 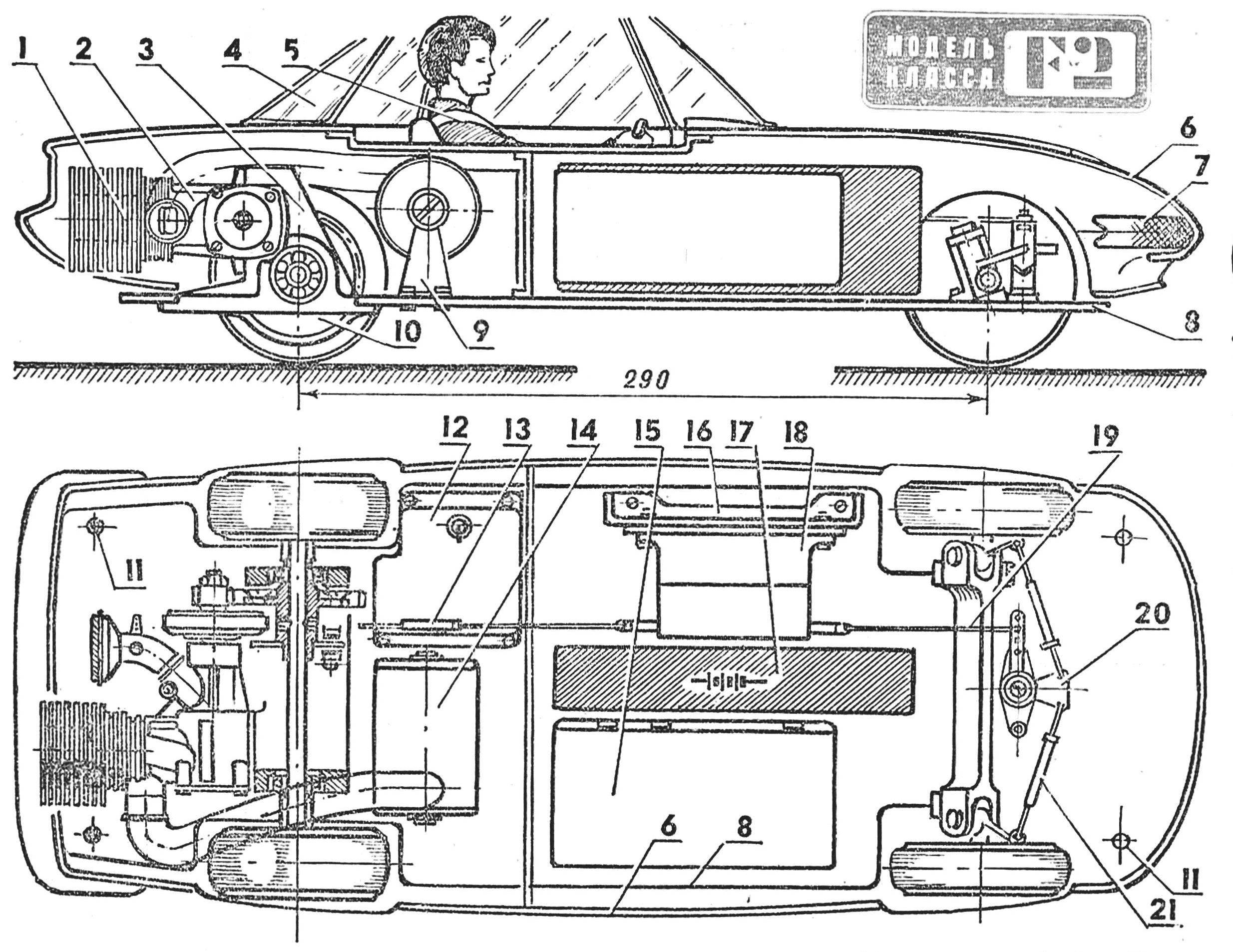 RC car:
1 — engine, 2 — additional finned cooling head, 3 — motor, 4 — glazed upper part of the body, 5 — simulation driver, 6 — exterior, 7 — joint tape glass cloth half vyklicky body, 8 — plate frame, 9 — bracket, muffler, 10 — casing the spur gear reducer, 11 — strut mounts, body on frame, 12 — fuel tank 13 — compressible element thrust brakes (radiolaboratory engine provides the same thrust), 14 — silencer 15 — receiver equipment radio control 16 — single bracket servo, 17 power equipment, 18 — vehicles equipment (one above the other), 19 — pull steering, 20 — breaker machine, 21 — thunder adjustment of the front wheels and control. The system model and depreciation is not.
However, the latest achievements of industrial self-similar equipment do not leave hopes even thinking about trying to keep up with them. Four-wheel drive micromachines with incomprehensibly complex kinematics, transmissions, engines with a capacity of almost two horsepower, the suspension is of such complexity that even some good photos not to understand what elements it was formed and how it works… And most of the parts molded from durable plastics. I agree, in the industrial production of these “toys” very much valid. Especially the casting technology of plastics in this sector have unlimited possibilities as complexity of individual parts, and assemblies in General, and even at a low cost in mass production. Well, what about those who are not able to get such a “machine”? 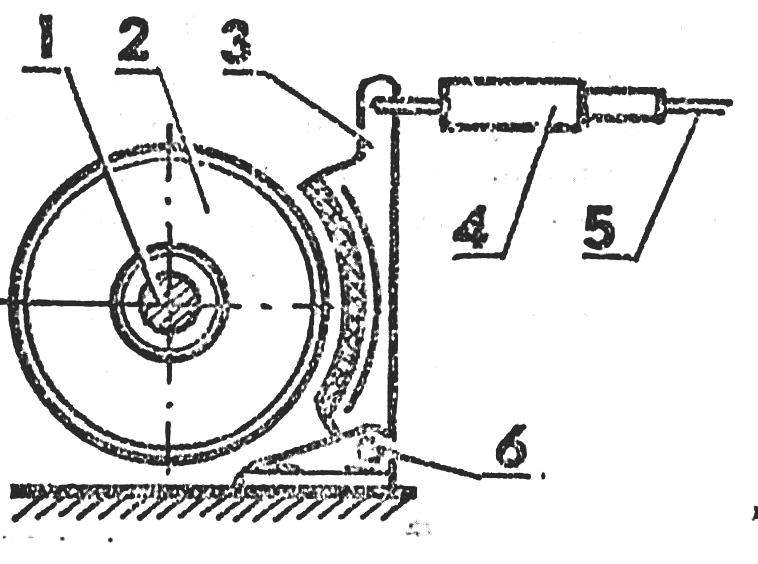 Simplified brake:
1 — the axis of the rear wheels. 2 — brake drum, 3 — Shoe, 4 — compressible element of traction. 5 — pull from the machine, 6 — mount bracket Shoe.
Yes, such thoughts are familiar to most trying to do RC. But… do not despair! Indeed, it is a hopeless situation does not happen. Let’s try, maybe you will be able to come up with something? 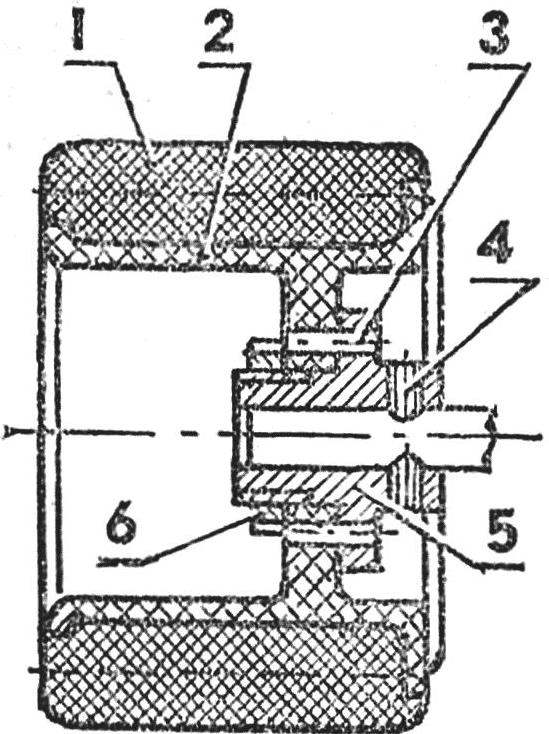 Wheel of the rear axle:
1 — porous rubber, 2 — hub, 3 — pin, 4 — screw fixing sleeve 5 — sleeve, 6 — wheel nut.
First, decide what boundaries to guide the calculations. Of course, with superabrasive ready industrial models, or for models that are executed independently, but in terms of what did not dream the average athlete will remain prizes.
However, the last place to expect do not want to! Here’s the time to remember stuff “for the sake of stability”, published in “M-K” No. 7 and 8 in 1983. It was proposed that even then seemed at least strange in its elementary simplicity. The rejection of the differentials are “scared” of many. Besides, the car had virtually no suspension system! Quite like for the kids. However, a year passes, and another… In the world Cup, held in Japan in 1985 and brought together 120 leading athletes from all countries, has been very successful masters championship (one of them — “silver”) cars of the same “child” scheme. Chassis without suspension, the drive wheel — no differential. And it’s the hardest in a tense struggle with the latest innovations in self-similar firms, specifically cooking some of their “representatives” for serious competitions! 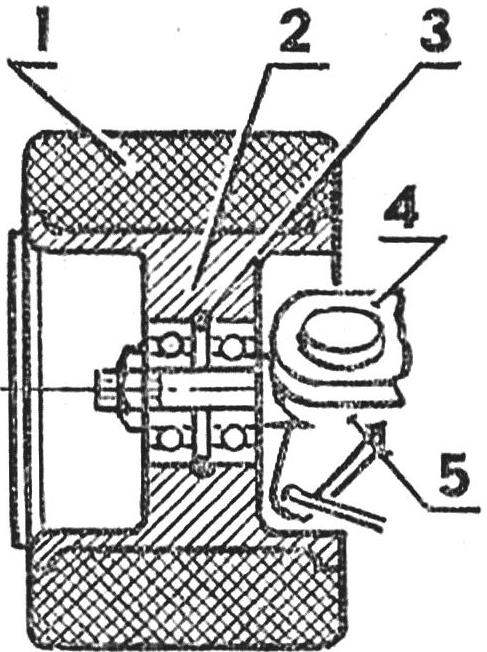 The wheel of the front axle:
1 — porous rubber, 2 — hub, 3 — ring split ring fixing wheels with bearings, 4 — front axle, 5 — rotary axis with the pylon.
Of course, the success of the Japanese would have been unthinkable without great tires and powerful motors, which are equipped with all the extra model. But here the chances we all had and equal, and in the end, on the fore the ability to pilot radiomobil.
In our conditions, to achieve the highest perfection of driving is possible only on the technique, similar to that described in the mentioned article. Otherwise, the training simply will not stay in time, it will go only to build unique models.
Thus, we assume that the overall scheme was found. The RC scheme, which is due to its reliability will be indispensable for training and competition high enough rank.

The schema of the muffler:
1 — inlet, 2 — body, 3 — membrane with holes, 4 — lid 5 — gasket output of the camera a thin wire “thread waste”, 6 — pinch snips. The outlet is removed from any convenient place wall of the chamber with a wire gasket. Necessary to ensure the tightness of the joint caps of the muffler housing.
Try only to make it more suitable for the capabilities of the average modeller. And so abandon the alterations of motor KMD-2.5 V nitro “Trajkovic”. Much easier to carry industrial “Talca” or CSTIM-2,5, developing good power. And to improve running characteristics of a vehicle with a motor of smaller capacity will take as a prototype for polyopia class F2 scale 1 : 8 a small car, say English “Elan Sprint” company “Lotus”. In addition to a pleasant soft forms of the body, in General, characteristic of the conservative British school of motoring sport in this modification attracts and the effect of the swiftness with which the machine as a whole, and a sufficient amount of internal volume, allowing to place in a small polyopia bulky equipment, and a low centre of gravity. The latter is provided by the lightest glazed top, which is simulated in the model by stamping from a sheet of plexiglass overlay and okraski elements of the bindings and the roof. In some embodiments, the “Elan Sprint” was produced as a convertible and only had the windshield. Procopiu acceptable to do the same, only then you will have to work on a more careful execution of the figures of the driver and the dashboard.
As a result of successful choice of the prototype we will have a small light micromachines. Will decrease and the mass of the plate “frame” of the body while increasing strength and stiffness of these elements! 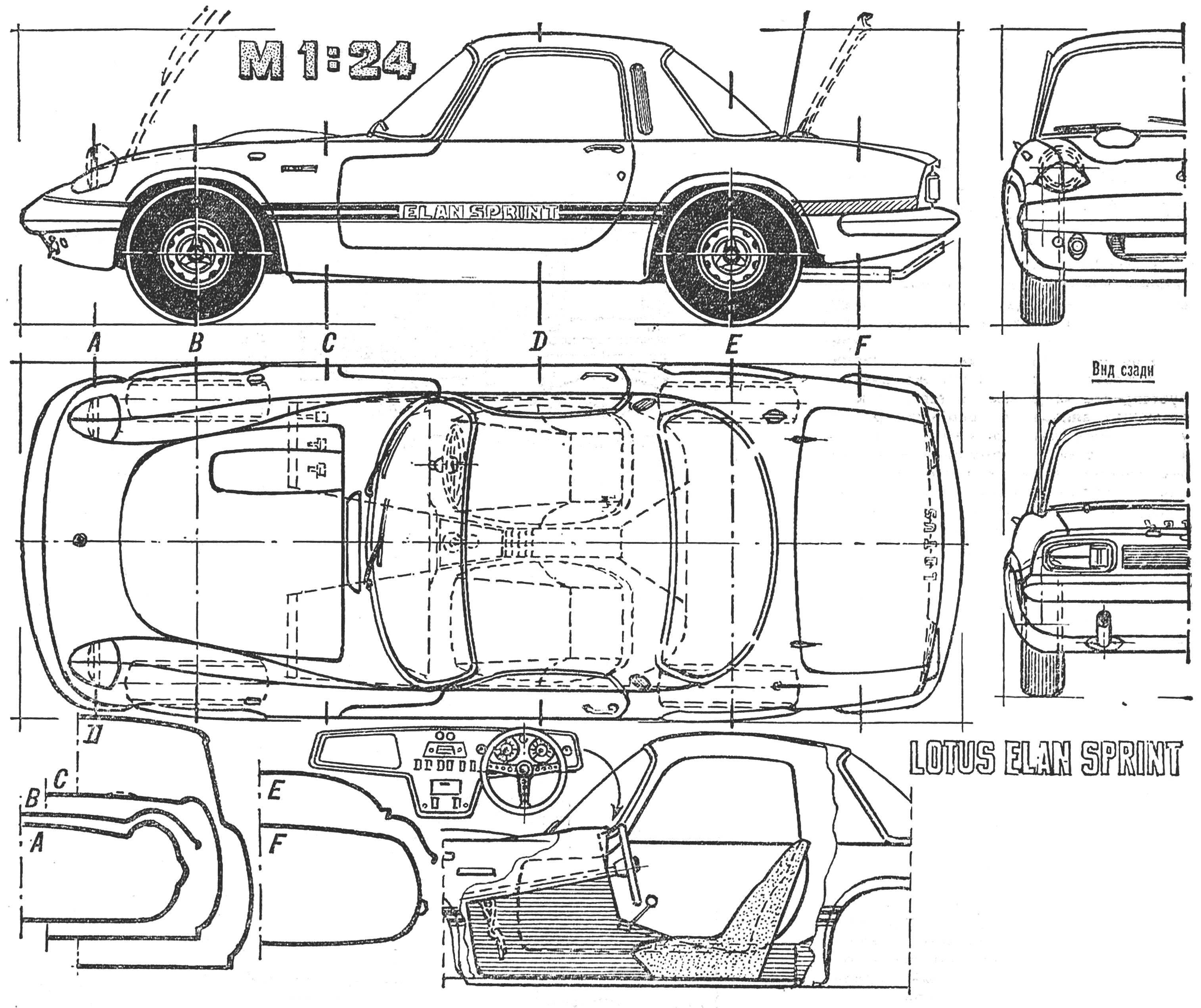 Sports car “Elan Sprint” company “Lotus”.
The back of the body makes it easy to place the engine of plant head in the direction of motion, which frees the main volumes, facilitates access to the engine, improves cooling and reduces heating units and equipment located within the model. The engine according to the scheme remain unchanged, the engine to improve the layout raised above. Gear ratio remains the same, despite the higher rpm
engine. This is allowed because the lightweight car more dynamic and the diameter of the leading wheels at this polyopia smaller.
The layout and design of the model is clear from the drawings. I think that for those who will undertake the construction of the micro “Elan Sprint”, some small knots would be no problem. Versions of some of them — in the drawings; for example, brakes, easier to manufacture and adjust compared to the disc.
In conclusion, I would again recommend that you read the article by V. Shepilov “In the name of reliability.” There you can find detailed drawings of the motor and wheels, and most importantly, it will help to delve into the psychology of the designer and understand the concept, influenced to a large extent on the design of new micromachines with remote control.
A. EGOROV, engineer, candidate master of sports