Old Russian game gorodki beat always popular. Many fans of this popular sport attracts it today. Our reader A. Zhdanov from Feodosiya has developed its desktop version, which is no less dynamic, keeps its swashbuckling spirit of competition and excitement and allows you to play on a miniature field at any time of the year. Not accidentally, the table towns marked by a copyright certificate.
Many types of sport are reflected in the Board games. That’s just the towns are still not there. Although, if you look closely, this sport if he asks for repetition in a miniature version — is so constructive all of its elements, suitably without changing the rules and conditions of competition.
Given that home is unlikely to be a permanent game table, I made a removable box for easy storage cut into three equal parts, attached to overhead straps on the spikes. It is suitably decorated sheet metal, veneer, plastic thickness of about 3 mm, about the size of 1200X550 mm. the fields have the sides flare from the low wooden beams, to avoid flying knock towns. From each of the bar stick out in four spikes (screw): they installed the base plate with notches on the upper edge under the pad with spring firing pin. Pad is bent at an angle cut sheet metal 2 mm thick and has a horizontal shelf under the oval broadening of the bat and the slot under the RAM of a striker. On each side the platform ends bent downwards petals, holding it on the base plastics.
The slide of a striker — cut block of wood, which, through the spacer (PA slot width pad) is connected with the bottom plate retainer that holds the RAM slots. To the front face of the slide with two screws attached to a flat spring-firing pin with a rubber tip (say, nipples). Towns can serve as a school counting sticks, pieces of pencils or a specially designed small cylindrical or faceted chips (with smaller faceted demands on horizontal field installation). Bit of the same materials, but slightly more massive. 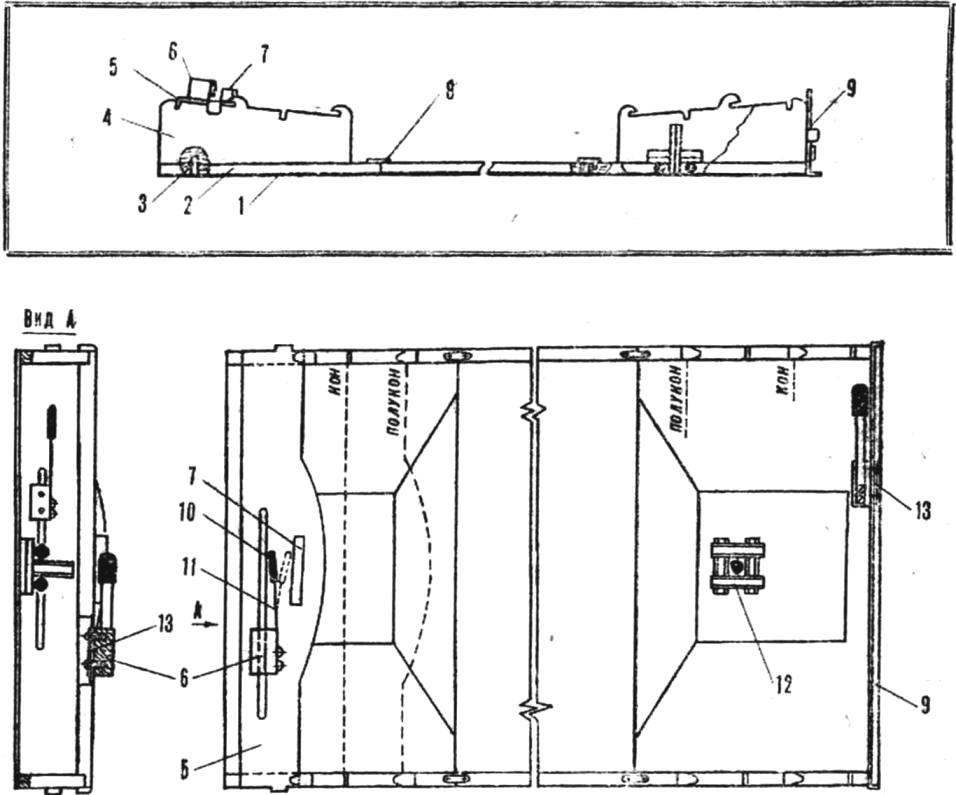 Table skittles — the look of the game (top) and the schematic:
1 — pole, 2 — rail flanging, 3 — pin installation the base plate, 4 — base plate, 5 — pad, 6 — slide drummer, 7 — bit, 8 — plank dock, 9 — pad in the “wall”, 10 — rubber tip of the firing pin, 11 — pin, 12 — figure 13 — lower plate of the slider.
Placing and cementing the leaves bearing box mounted on the sides of the base plate, and the first cutouts — pad. This will match the position of “con”. Marked on the game square of the towns built the first figure, and one of the contestants starts the game. On the pad by moving the slider select a convenient starting position for the attack on bit, which is placed in front of the striker plane to him. Pulling your finger to the firing pin, perform a punch — bit at the target. Everything else in these towns: and the rules and figure, their number and sequence. Knocking out after the first strike at least one town outside of the square, moving the pad forward to another pair of notches of the support plates — “go” into “polycon” and continue to knock other cities. During strikes the opponent keeps the pad vertically in its square, forming a wall for catching the ejected bit.
To play table skittles, like these, can two people or two teams. The winner will be the side that knocks out all the shapes from the playing square fewer bits.