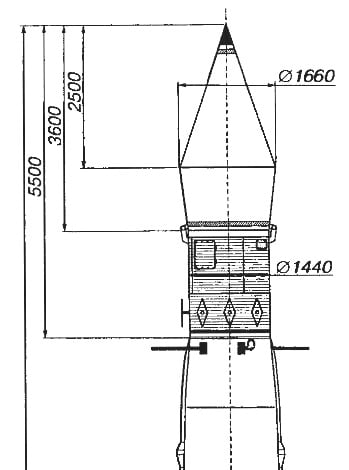 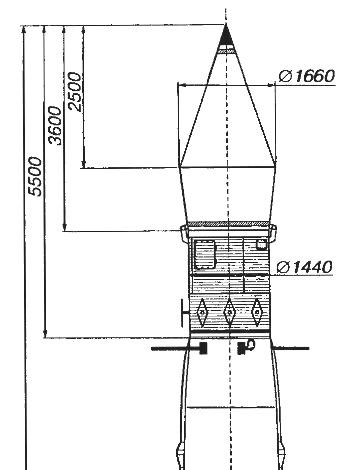 A kind of triumphant decade, one of his model rockets notes flying club syut town of Elektrostal, in the Moscow region. Created rakotomalala and model-copy geophysical rocket-5V continuously improved, they successfully participated and won at the most prestigious competitions and Championships in the S7 category.

Sporting success was last year. At the all-Russia competitions on the Cup of S. P. Korolev the winner in the category of S7 became M. Shikhvatov. Great success had fallen to the share of copyists with a miniature V-5V in the championship of Russia among schoolboys in Kaluga. The first place among senior students took electrostatic A. Mironov, and A. Potapov and M. Shikhvatov — respectively second and third.
In the championship of Russia of 2000, among adults in the eagle third place was taken by V. Melnikov, fulfilled the standard of master of sports of the Russian Federation.
The final competitions of the XX century was for rocketmodeler international competition “Cup Baikonur-2000”, held in the fall at the spaceport. And here in the class of models won Shekhvatov and M. A. Potapov with miniature missiles V-5V.
Proved good reputation models rocket-5V and the results of the 2001 sports year. A team of copyists syut town of Elektrostal was the first among young men and athletes on “the Cup C. the Queen”. And all three prize winners in the category Э7 performed with models of the rocket V-5V — Sutovsky Elektrostal: V. Melnikov, A. and J. Zvonilki Sichevoy. In the championship of Russia of this year among students once again won rocketmodeler submitting copies of the rocket V-5V: A. Potapov, and A. Mironov.
Summing up the performance of students (boys) in the category S7, it is encouraging to note the constant presence of the prize “rocket scientists” acting with copies of the rocket V-5V. I want to believe that the publication of this development will be useful both for beginners of copyists, and for athletes arresters.
In the beginning 50-h years in OKB-1 was carried out works on creation of ballistic long-range missiles. As a result of deliberate research and experimentation appeared first strategic R-5. The launch was held on 15 March 1953. Along with the strategic was created and geophysical rockets R-5A and R-5B, which continued the study of the atmosphere and outer space. Later renamed them: they were called V-5A and V-5B.
Since 1958 for testing of the means of descent of experimental animals from high altitudes are mainly used sounding rockets of the type V-5V — driven, single-stage with liquid propellant engines. With their help, a large program of astrophysical, geophysical and biomedical research. The number of missiles V-5V installed automatic astrophysical Observatory for the study of the Sun, which is a spherical container with a set of scientific equipment, recording ultraviolet and x-ray radiation of the Sun. The flight of such an Observatory took place on a vertical trajectory to an altitude of about 500 km. On the descending part of the trajectory at the altitude of 4-5 km, the container was separated, was moved to side and landed with a parachute. 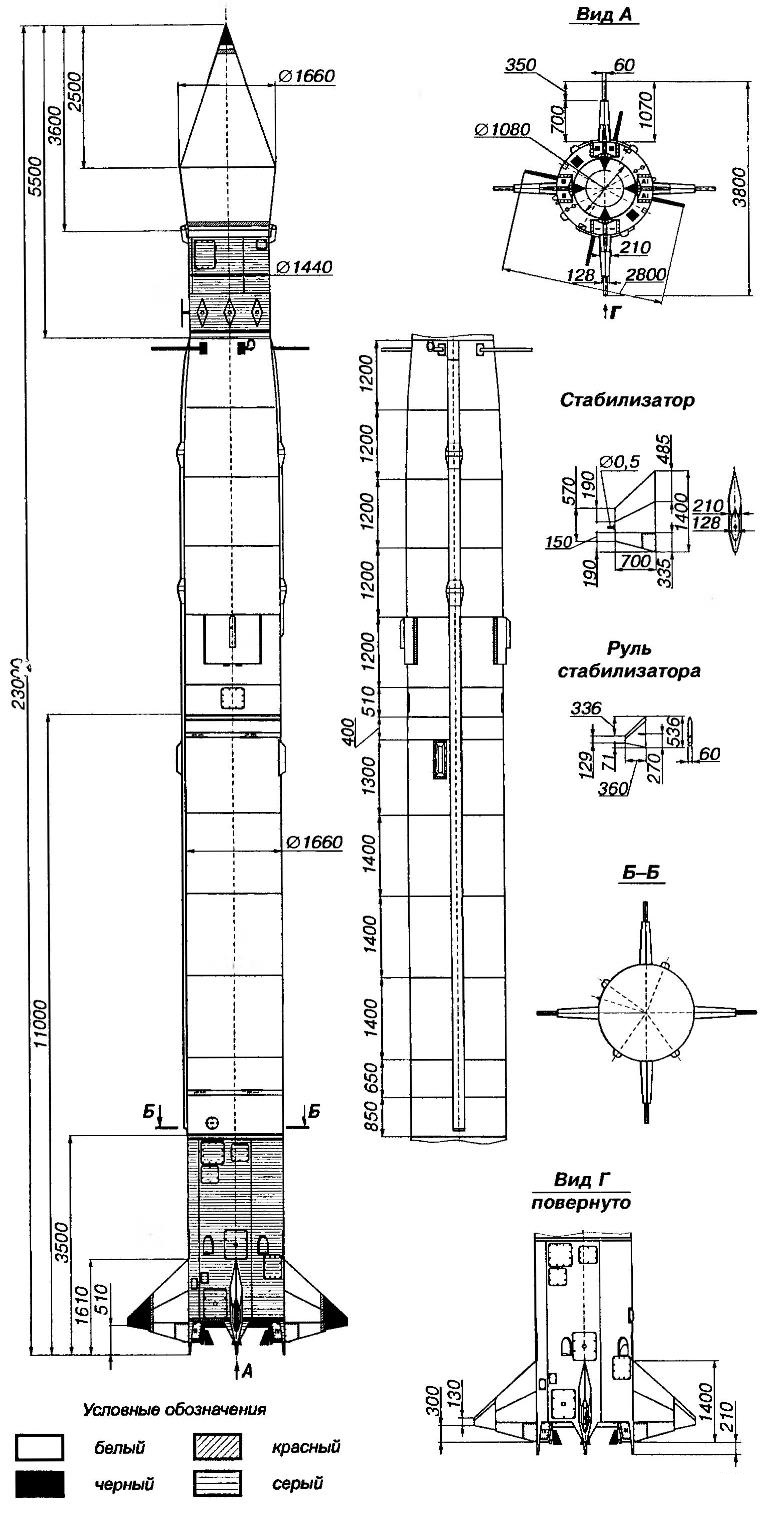 Fig.1. Probe V-5V
The salvation of the studied animals, mostly dogs, carried out as a smooth descent pressurized cabins, and the ejection from different heights and landing on parachutes animals placed in the hermetic space suits.
The design of the rocket (Fig.1) is easy. Her whole body was serving as a separation for tanks. Even the cables and the various wiring was taken out to the outside and closed by garrote. The upper cylinder of the casing served as the instrument compartment, which contained on-Board computing devices and a payload. The head fairing was the balloon sampling for geophysical data.
The missile had a length of 23 m, maximum diameter — 1.66 m, the range of stabilizers is 3.8 m. the Maximum lifting height of about 500 km, a launch weight 29 300 kg. Mass of payload the rocket reached 1350 kg. was Governed by a rocket V-5V aerodynamic and gas rudders.
CONSTRUCTION-MODELS
TRAINING. It usually begins with selecting the scale of the future aircraft — sporting “shell” of the athlete. In our view, scale 1:25 is most suitable. That’s when it the model has dimensions suitable for category S7: overall length — 920 mm, diameter — 66,4 mm.
To make one you must carve metal three bars: the main body diameter of 65.5 mm and a length of 620 mm; the transition of the cone — length of 96 mm and diameters at the ends of 65.5 and 55 mm (cone is 3°) and the upper cylinder with a length of about 100 mm and a diameter of 55 mm. the Material for the manufacture of model — drawing paper. Therefore, the diameters of the mandrels is reduced by 1 mm (0,5 mm wall thickness).
In our circle model-a copy of the rocket V-5V built in two variants and both of them have proved their viability.
IN TWO LAYERS. The case in the first embodiment perform the power scheme two-layer plating. First, on the mandrel with a diameter of 21 mm glue inner paper wrapper with a length of 690 mm. It serves as the technological axis to bring the whole body of the model. Then from foam PS-4-40 8 to 10 mm thickness cut out five frames and is mounted on the inner shell.
The outer shell vyklevyvajut of three elements: two cylindrical and one conical. The first cylindrical has a diameter (internal) of 65.5 mm and a length of 607 mm, the other diameter of 55 mm and a length of 75 mm. Length of cone element 97 mm. All three elements of the outer shell are glued from two layers of drawing paper on the respective mandrels. After drying they were treated with sandpaper and coated with nitrocellulose lacquer. Then butt, razor-sharp knife on a mandrel clamped in the Chuck of the lathe. The rotation speed of the Chuck 70-120 rpm parts attached to the frames, collecting them from the outer shell of the housing. After this case is processed, clearing the bumps, and coated with nitrocellulose lacquer.
Stabilizers (four of them) cut from the lime plates with a thickness of 8.5 mm. Collected in the package in drops of glue and process a file on the contour to the desired size. Further, the layout and profile each stabilizer separately. Ready varnished and fastened to the lower skirt of the body with epoxy resin on the heels of bamboo with a diameter of 3 mm. Aerodynamic control surfaces are cut from plate glass with a thickness of 2.3 mm and on steel studs (lengths of pins) is attached with epoxy glue to the stabilizers.
All exposed exterior parts of the body (hatches, adapter rings) made from paper, fairing for laying electric cables, plug connectors — made of Linden slats of appropriate size. Welds mimic thread.
The outer elements of the bottom part is made of lime, treated, coated with a nitro lacquer, if need putty. Then paint black and attach to the finished (painted) model.
Fairing machined from billet phony and ease inside the curly boring cutter. Landing skirt fairing has a diameter 56 and length 25 mm. Imitation of the joints of the disclosure halves of the fairing from the PCB.
Assembled model-a copy of the cover nitrovarnish. After each layer the surface is treated with sandpaper. If there are burrs or rough edges, the body putty and then sanded. The entire model is first painted white, then the motor and instrument compartments — gray, aerodynamic control surfaces and antenna — black. Other external coloration and markings make according to the drawing.
For the model runs used MRD 20-10-4 with a maximum momentum of 20 N·s. For maximum reliability the recovery system is made of two parachutes with a diameter of 500-600 mm for the hull and fairing. Cut them in fine silk.
The starting weight of the model is about 300 g.
IN A SINGLE LAYER. In recent years we in the circle developed, and other technology manufacturing copies AT-5V, the second option. The starting mass of the model is slightly less 270-280 g. the Case in this case is also power, but single layer. Its main elements are collected using casein glue from the drawing paper on the same mandrel. It is necessary to consider that the paper gives greater shrinkage, but the glued parts are more rigid than other adhesives. After drying the casing treated with sandpaper and varnish. Then on a lathe butt parts to the desired size (length).
To build the hull carved out of basswood three bushings: lower (power frame) and two connecting and glued them. First, connect a conical element and a small cylindrical (diameter 55 mm), and cylindrical power fixed frame. The body part should be installed vertically on the glass, and the top to press down a small load. 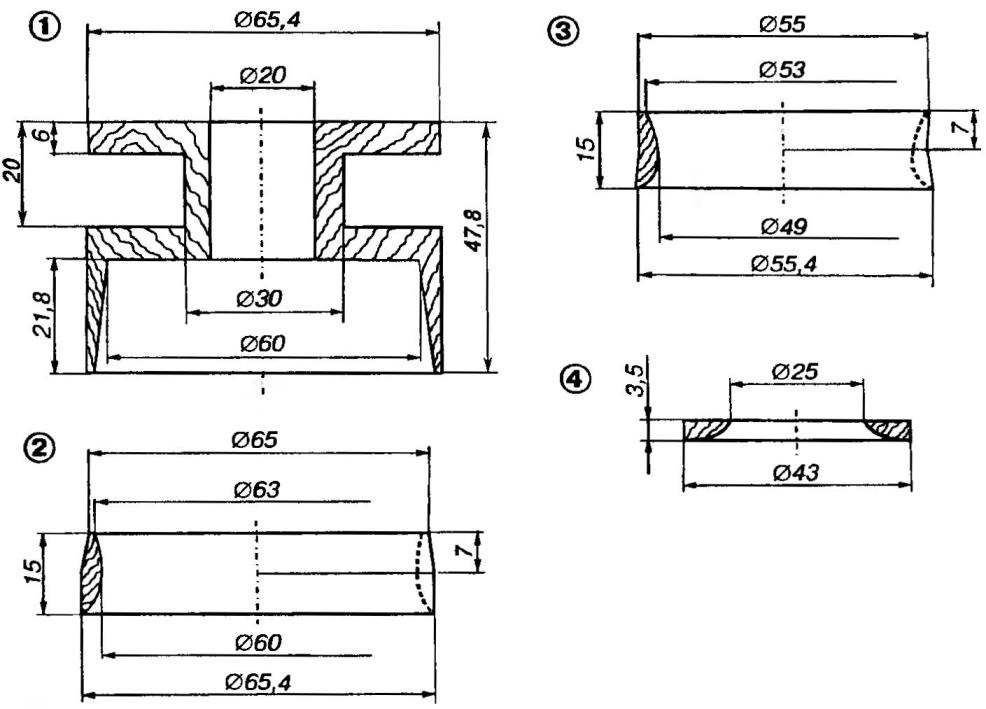 Fig.2. The internal elements of the model-copy V-5V:
1 — power frame (lower bushing); 2,3 — hub connectors; 4 — ring-pad bottom
After drying, finally assemble the housing, pre-vkliw in the lower element (cylinder with a diameter of 65.5 mm) two inner brace — lime ring with a width of 10 mm and a wall thickness of 2 mm. This is done to strengthen the lower element and save them form the right circle. Then set the cylinder on a level surface and glued at its free end a second connecting sleeve and attach the two top elements (already glued) — cone and the small cylinder.
In the aft part of the hull after gluing the lower sleeve, circumferentially doing four curly cut length of 21.8 mm. the Remaining four elements are the rear stabilizers, mounting parts for the number of copies of elements and pillars to start.
Giving harden the resin, the finished hull is treated with sandpaper and varnish. Further work on model is conducted on already known technology. Also made stabilizers and other exterior parts. The color and finish are the same as in the first embodiment.
Those who want to complicate the model copy, it may be advisable to make a fairing detachable: grind of lime, cut in half lengthwise and hung on hinges to the body. Inside the fairing you can place the balloon (the probe) with a diameter of 45-50 mm, which is removed when triggered, embroidered charge mrad. In the category of S7 it will be evaluated as a special effect (flight demonstration) extra points for realism of flight.
V. ROZHKOV, master of sports