Introducing radio controlled model aircraft for training flights. The prototype was popular among modelers from different countries models “Corkscrew” (Corkscrew) is an American athlete Stuart L. Richmond. The appearance in the sale of grooved balsa plates and rails (at least in specialised stores) as well as excellent flight performance and simplicity of execution “Corkscrew” became the incentive to further improve the original scheme.

A microplane is the ideal transition machine from educational to sports vysokopreosv low plans. At the initial stage it is recommended to use the engine a working volume of 2.5 — 3.2 cm3 and to produce a wing profile And is mainly for the acquisition of sustainable skills in piloting. Then in the process of training flights you can go to the wing profile Used to install the engine capacity of 3.5 — 4 cm3. Thus, it appears great trenirovannosti models. Its flying qualities are more strict, but they allow you to realize any fantasy of the pilot.
Construction is mostly balsa plates, plywood plates and pine or spruce strips. The fuselage consists of two sides, parallel to the trailing edge of the wing. In the bow they are glued to the bars of the motor, and in the middle — lodgements fender corners. The sidewalls have front and rear edges of the wings are connected by a power formers. Depending on the dimensions of the constituent elements of onboard equipment of the radio in the fuselage is built prosperous Board and servos. All parts are glued with epoxy resin with a plasticizer, as well as reinforcing the landing gear area for the stands, lining the bottom bow and the top of the booth. After curing of the adhesive gives the final shape of the tail section with the inset of the rear frames.
At this stage, it is recommended to install traction control elevators and turning. To do this, in the last three frames and drilled the appropriate holes. Then sewn the top and bottom of the tail. Plate covering the cut with an allowance and after gluing to the sides processed by the final contour. Glued the keel and the wing mounting pins. The inside of the engine and fuel compartments covered with two or three coats of two-component parquet lacquer.
Tail models carved from balsa plates; edges rounded, and handlebars astrogeny “wedge” to the trailing edge to a thickness of 1.5 mm. Halves of the Elevator jointed pine lath 100x5x5 mm. Hinges hinges of the rudders — standard branded (can be homemade), I advise you to glue them after painting and finishing the model. Ready-made plumage is mounted in the rear fuselage epoxy resin. 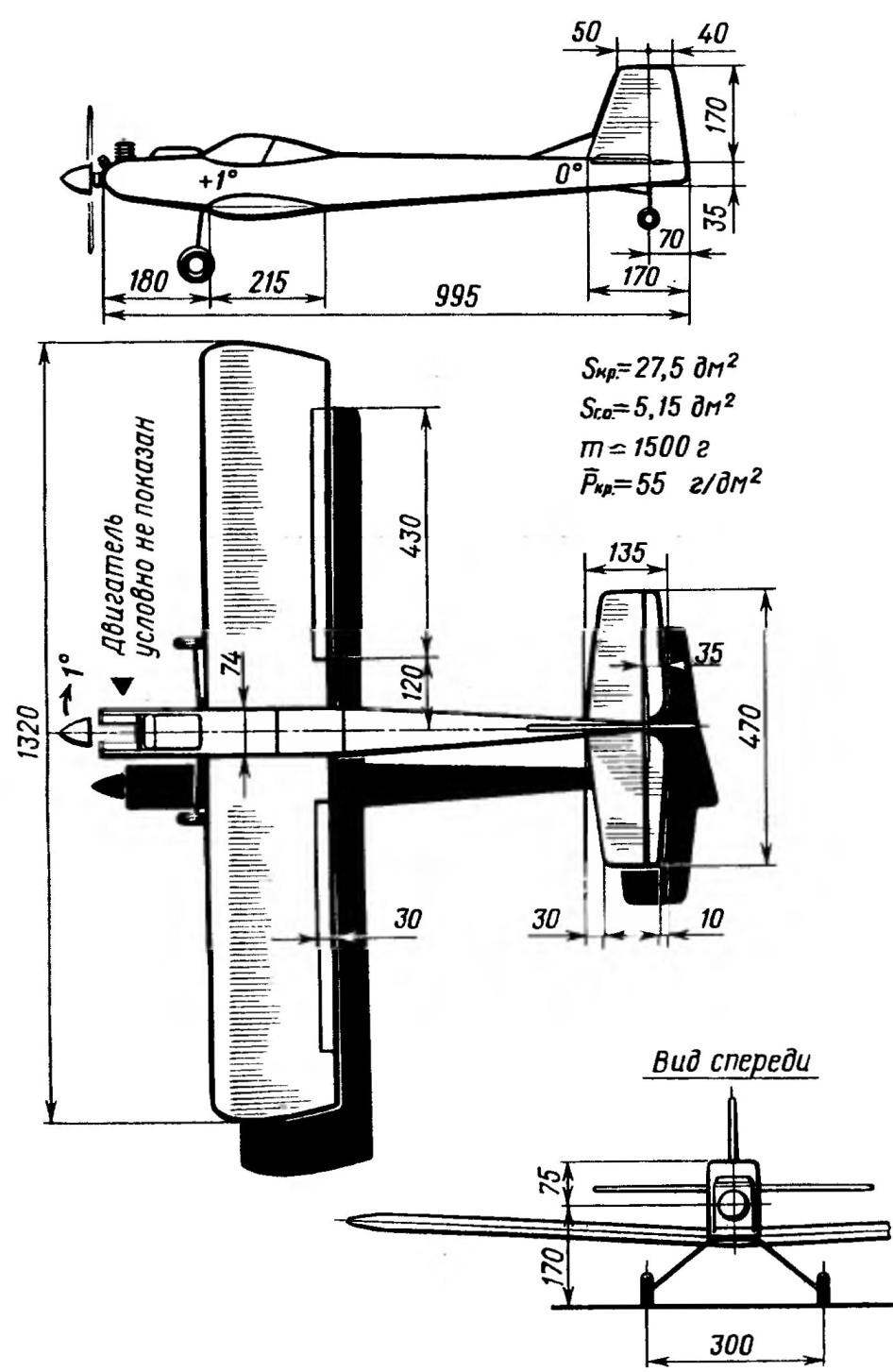 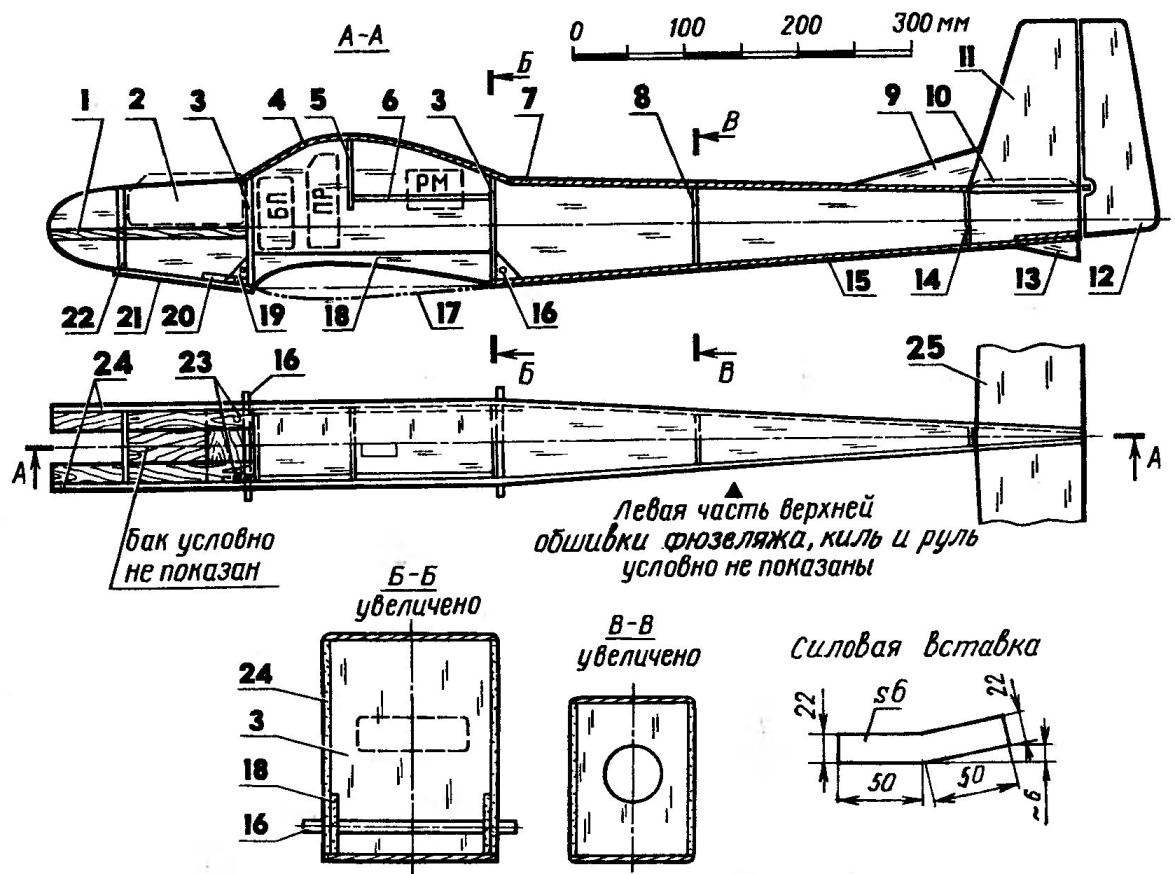 The wing profiles:
And training option B — flight option.
The chassis is made from spring wire with a diameter of 3-3,5 mm. the Rack is attached to the fuselage by two aluminum brackets with screws (screw-mi-“with screws” from the broken VI-diocese). The wheels of the main landing— with a diameter of 50-60 mm, and the tail is 20 mm Instead of the rear wheels, you can use the crutch from wire with a diameter of 1.5 mm.
In the pictures the model is shown with airfoil type, however the design of both versions do not differ. The Assembly was carried out in the usual way. Ready ribs and noses glued with shelves spar and edges. The shanks of the ribs are reinforced with gussets. To assembled frame, glued the tip with reinforcing struts. Edges and spars cut “wedge” to the edges of the fins. Front and back edges are processed according to the profile of the wing.
Wings collected separately, and then using the power panels of 6 mm plywood installed between the shelves of the spar, glued with epoxy. Modelers with little experience, we can recommend to provide greater strength to the wing ends of the power panels, and also the middle right and left of the centre attach of thread (turn to turn) to the spars and to soak nitrocream or epoxy resin.
The front and rear edges in the area of the center section glued back to back, after which the seam is reinforced with strips of glass, of a thickness of 0,1 -0,15 mm. Then, the surface of the center section sewn with plates of balsa.
At the rear edge of the wing glued the torsion bars drive the ailerons in the tubes, then the edge of the center section and trim the gain, which protect the edge from crushing the rubber holding the wing to the fuselage. Finished the ailerons are mounted on three hinges each. The Assembly ends with the gluing edge ending. In two sections of ribs in a root portion of the consoles between the spars glued wall (shown dashed) of the plates of balsa wood with a thickness of 2 mm and with a vertical arrangement of fibres.
The wing is covered with mcalenney or Mylar film as the fuselage with the tail, then painted. Finished model imported films such as “monocot” or “solarfilm”, which is easy.
Tank with a volume of 150-200 cm3 (with a tracking system toplivoprovoda) installed ready brand, but make it possible to of suitable plastic containers of drugs or cosmetics. The solder tin will be heavy, though and it is fine.
The model is designed for modern four channel proportional control system. Used channels control ailerons, Elevator, rudder and carb motor. With a shortage of channels possible to fly without a managed “gas”.
Deflection of elevators and ailerons ±15°; rudder ±25°.
Dmitry SINITSYN