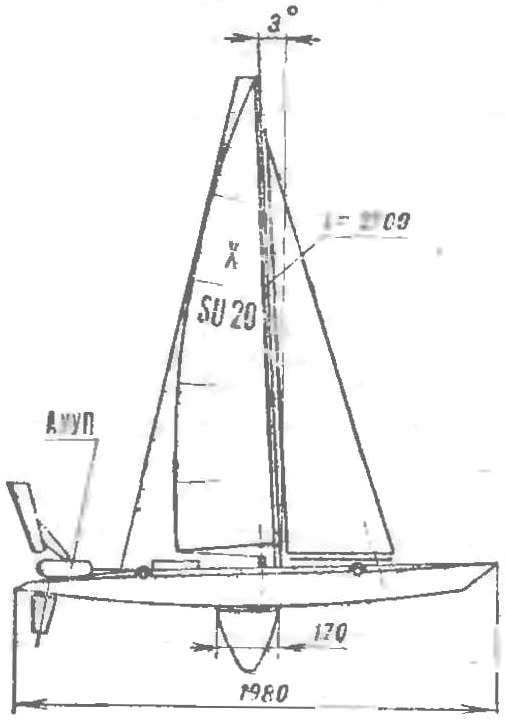 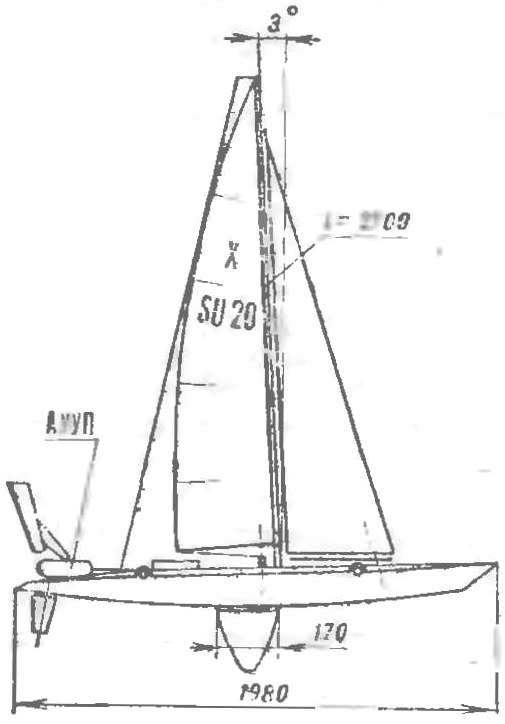 The appearance on the competition models of sailing catamarans and trimarans was the natural result of the development of a very interesting class of ship models — radio-controlled yachts. First I gotorussia was built in our country in 1974 almost simultaneously by three athletes from Kiev, Valeriy Bondarenko, a Muscovite Valery Efimov and the author of this article. All mini yachts was created on the basis of requirements for models of class F5-S (with an area of 0.5 m2 sail). The best results showed catamarans. In the future, on the basis of their group Kazan modelers have worked a few designs, which already could compete with the traditional single-hulled yachts with moderate wind and have a distinct advantage with strong.

Use mnogotochechnykh hard sails of the “wing” has led to the emergence of automatic electronic controls for the sails (AUUP), then such mechanisms were installed and catamarans with arms Tina “Bermuda sloop”. It should be noted that the use of AUUP although increases the speed of motion of the model, but at the same time complicates the choice of optimal exchange rate. The fact that all the tacks of the sails are working in the position of maximum pull, and this allows the athlete to keep on sailing for the “visits” and “waste” of the wind.

Thus, the typical Multihull yacht was a model with a sail-type “Bermuda sloop”, nonlinear guided rudders (catamarans), managed chertami or flaps on swarth, as well as with automatic sail handling and correction of his work with the help of radio.
In 1981, the NAVIGA introduced new rules for construction of models of class F5. In accordance with these rules, first in Kazan, then to Ulyanovsk and Voronezh was established Multihull yacht model class F5-X 0.75 m Testing them in races showed that these yachts (Fig. 1-4) have a good seaworthiness and quite satisfactory maneuverability. 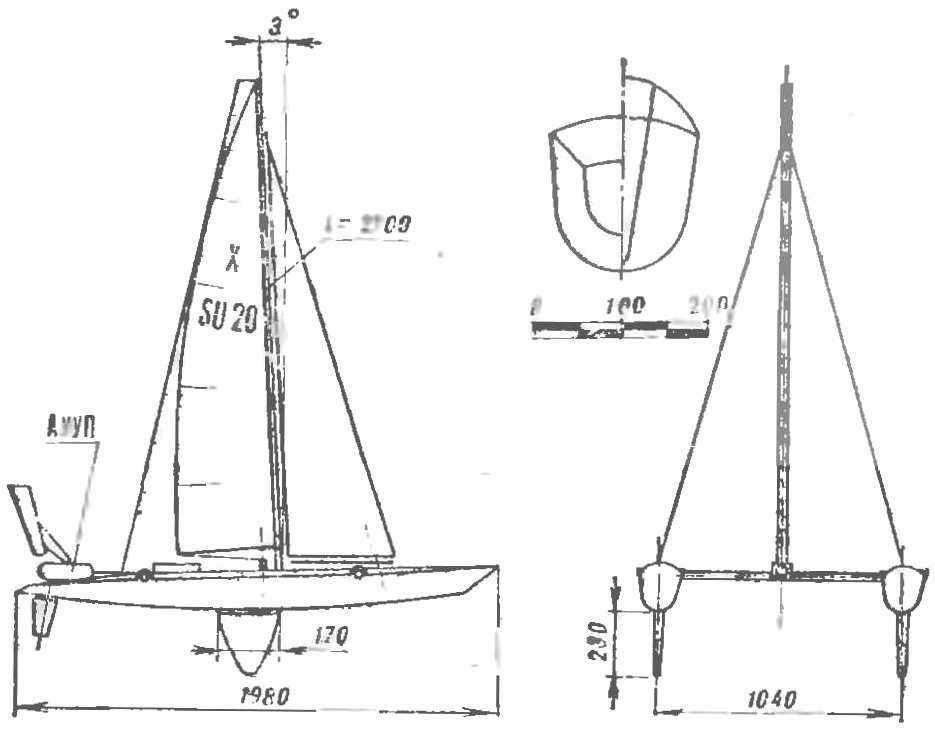 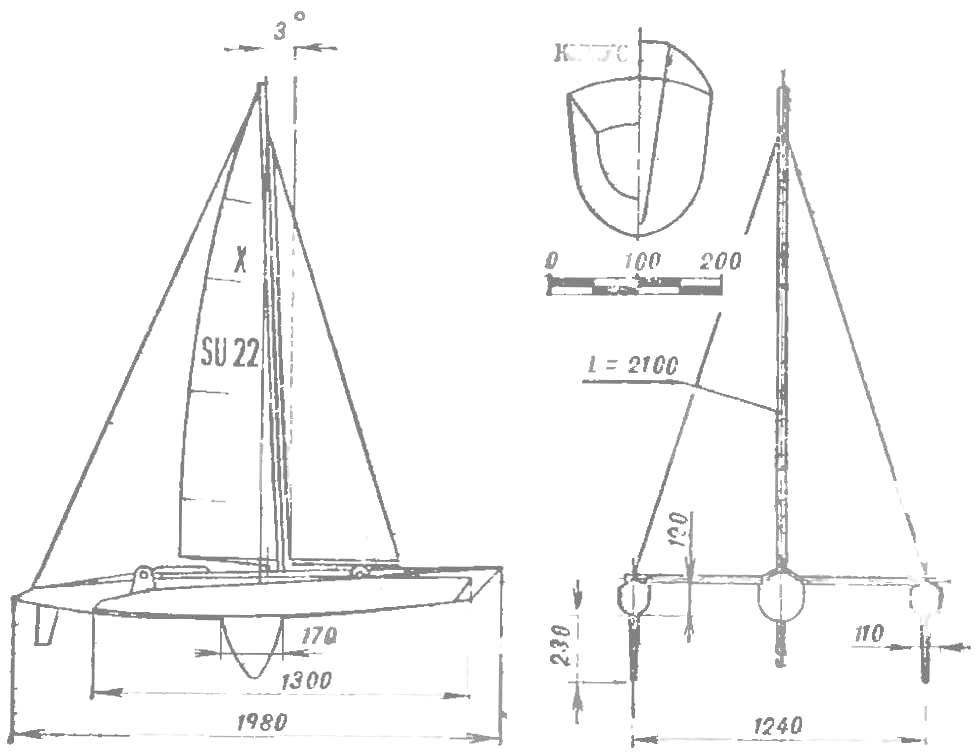 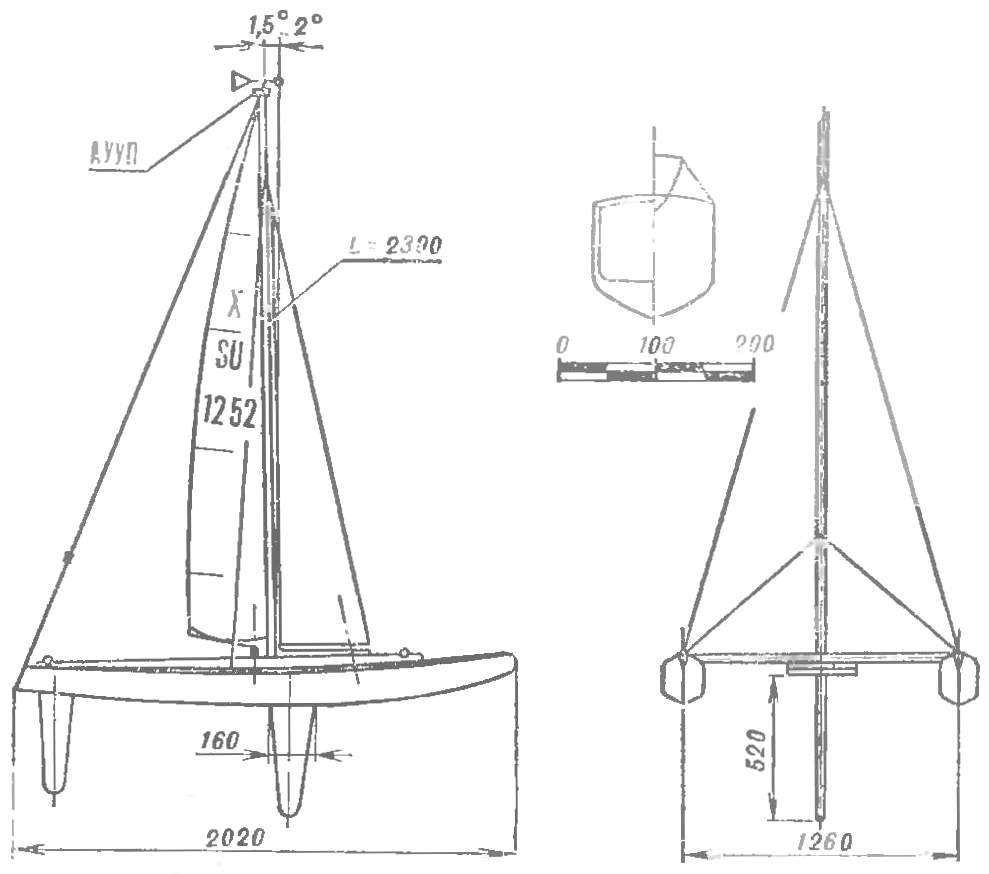 Fig. 3. The catamaran designed by S. Petrova and S. Ryabchikova (Ulyanovsk); square sails 7460 cm2, weight of 6 kg.
If we compare vs four of a sailboat, we can see that the length of each is more than 1.9 m and a width of not less than 1.0 m. all catamarans big difference in the length of the waterline when moving at even keel and the roll (large valances and overhangs). The total area of the centerboard is more than 8% of the actual sail (except tri-Voronezh). Characteristically, the athlete run yacht not only rudders but also chertami. Displacement is about the same — from 6 to 9 kg. the Machines control the sails are used only on katcharava, trimarans such devices no. Of the body, usually formed U-shaped bow, the firm which is below the waterline represents the arc of a circle. This greatly reduces the wetted surface and consequently the frictional resistance which mnogoyarusnyi yachts more than conventional of the same displacement. Such corps have a movement rate of the PA light winds, most of the adverse mnogoyarusnyi. It should be noted that all four models waterline but the midsection of “snug) in the stern with the purpose of laminarization of the flow.
A close look at the designs, you notice that the location of the rudders and Vertov models Kazan athletes is somewhat different from that adopted by Ulyanovsk. The first is done in the usual way, while the second — almost like class models, the HH — both centerboard on the Central beam with independent (for different channels) of control While the advantage of such a scheme in the course of the race could not be detected, however, Ulyanovsk modelers are confident in its prospects.
Many races have shown that the catamaran has a greater top speed compared to a trimaran, especially courses on “full wind” and “galfvind”, although it is less fun in light wind (less than 1.5—1 m/s).
When driving at moderate and strong wind right wingman catamaran away from the soda and the windward float and dramatically accelerates. This traffic pattern is not available for trimaran, which is in a similar situation falls on the leeward outrigger.
All are shown in the figures the model is laminated of fiberglass on epoxy resins. Housing bezsensowne, which enables to obtain undistorted lines. This is important since PA high speed slightest irregularity of shape increase the resistance, and this inevitably affects the outcome of a race. The surface buildings are carefully polished. The rotary mast, carbon fiber is laminated on the balsa Borno. Their forming in a metal matrix. Dacron sails made of fabric with a specific weight of 90 g/m2. Beams that connect the housing, the metal tube (D16T, pipe 14X1) Axis rudder — wire-“silverfish” Ø4 mm, and Vertov — OVS Ø6 mm. Kinematic control models are shown in figure 5. 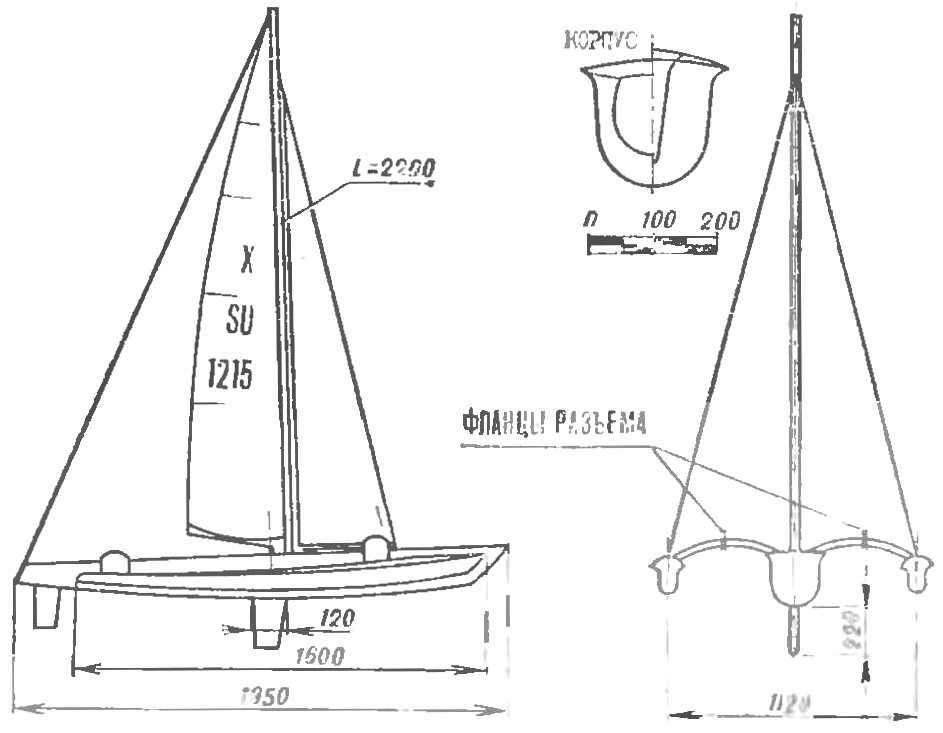 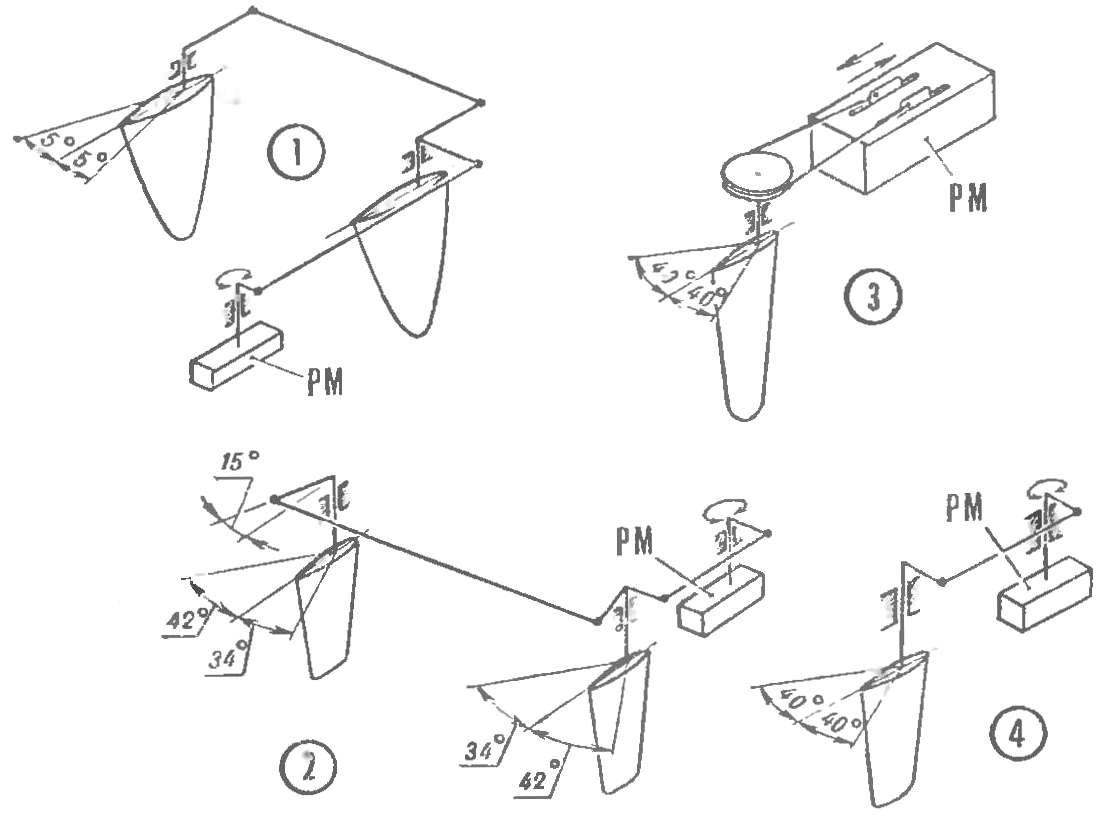 Fig. 5. Kinematic scheme management models:
1 — management of vertumn models SU20 and SU22, 2 — rudders on the model SU20, 3 — the steering on the model SU1252, 4 — the steering on the model SU22, RM — servo.
Since 1982 Kazan athletes began to be widely used shaped sails, welded with ultrasound. It is possible to obtain 25% increase in thrust at the weak and moderate winds, which is very important for Multihull models with considerable wetted surface of the hull
Comparing the latest domestic designs mnogoyarusnyi abroad, it can be concluded that although the latter are close in their dimensions to models of class F5-X 0.75 m2, but have a number of features. In particular, the model of American athletes are loaded with rigid sails with slats, and English, although use of the weapons type “Bermuda sloop”, but not in the classic and modernized look, with wide (with an area of up to 40% sail grotto) aerodynamic mast. Managed Vertov and automatic control system of parks they are, as a rule, are not used
In conclusion, I would like to draw the attention of those who want to try their hand at building a Multihull yacht for sailing vessels require highly meticulous workmanship, setting, and prolonged exercise on driving techniques of different winds. The fact that when the acceleration rapidly changes speed and direction apparent wind. This leads to increase in comparison with the single boat loads on the mast and hull that can not be ignored in the design process and in training.
I. GOLOVIN, master of sports of international class, Kazan