The first USSR championship flying micro models. It was held in 1990 at the Palace of sports “Dynamo” (room category III, altitude up to 30 m), but due to the lack of advertising and related preparatory work by the organizers remained almost unnoticed by sports public of the country. Fans gathered surprisingly little. Especially when you consider that entertainment, appeal to such events, as they say, not to occupy.
Impressive, especially for the viewer, the novice, looked themselves launches man-made “dragonflies” with a Golden sheen “membranes” thick… No, not in the micron — Kool! Could anyone be indifferent to the behavior of the model in the air, the abundance of serious issues: from ending up in some God knows what any sudden downward or upward flow before the collision, breakage, hangs on the intricacies of openwork trusses ceiling of the hall. Conflicts, growing competition, the spirit of competition between teams and among the participants.
While the age limits have come into the fight for the championship contenders is quite wide. A boy of 13 years (M. Patin, student of the 8th class of secondary school № 73, Tula) to the sport of maturity of those who are over 50 (M. Zgorzelski, 53 years old, candidate master of sports of the USSR, Perm).
The particular intensity of the championship gave, of course, the participation of the recognized leaders of previous years — the winners of the competitions at the USSR Cup in flying micro models. Such as master of sports of the USSR V. Dvinskikh, M. Ivlev, V. Machulka, V. Savchuk. And training the younger shift, it was felt, to veterans. It is time, in the opinion of the referee — a judge-Union category B. Roshchin, to challenge a world record (44 min 43 s) established by the American D. Richmond in 1979 for gyms category III. Especially because nearly two-thirds of the participants arrived at the championship with the most contemporary models have a screw with a variable step in flight (VISH) designs Komarov, consider a patent as a possible invention.
Well, expectations expectations, but the results… of the 6 flights the sum of the two best (53’54”) the champion of the country became a Muscovite Vladimir Komarov on the model with VISH’s own design. Just half a minute below them from it the master of sports of the USSR from Donetsk V. Moskalev. In the end, this athlete was able to take a 2nd place. On the third step of the podium was… mark Patin, the youngest participant of the championship. The result is 46’03”. Receiving medal, bronze medalist publicly stated that this award, like the corresponding honorific title that should rightfully belong to the coach and the mentor — candidate master of sports of the USSR Mikhail Ageev.
But all this has become history. A successful “dragonfly” champion taken as a basic domestic model for the assault on the world record, which, I think, is not far off. What are its characteristic features? What’s the secret to “screw Komarov”?
— Unlike my last the ultimate test-flying micro model from the well-known version of a class V1D — recognizes the reigning champion of the master of sports of the USSR, Vladimir Komarov, in a number of nodes. Take, say, wing. Chord is probably the least of the domestic models — 195 mm, which allows optimal manner can climb and planning. The main components and parts are made of balsa, which is cut into blanks of required sizes made on a band saw its own manufacturing and development. Some also apply to imported finished material. For example, “Micro-x ultra-si 4-41 /2 El-bee-bee” (USA). Required density: 0.06—0.08 g/cm3 — rib, of 0.09—0.1 g/cm3 , the blades and hub of screw and edge. And the cut on the rib thickness of 0.4 mm should have a scaly pattern, wherein the strength of the material, as shown, the maximum. 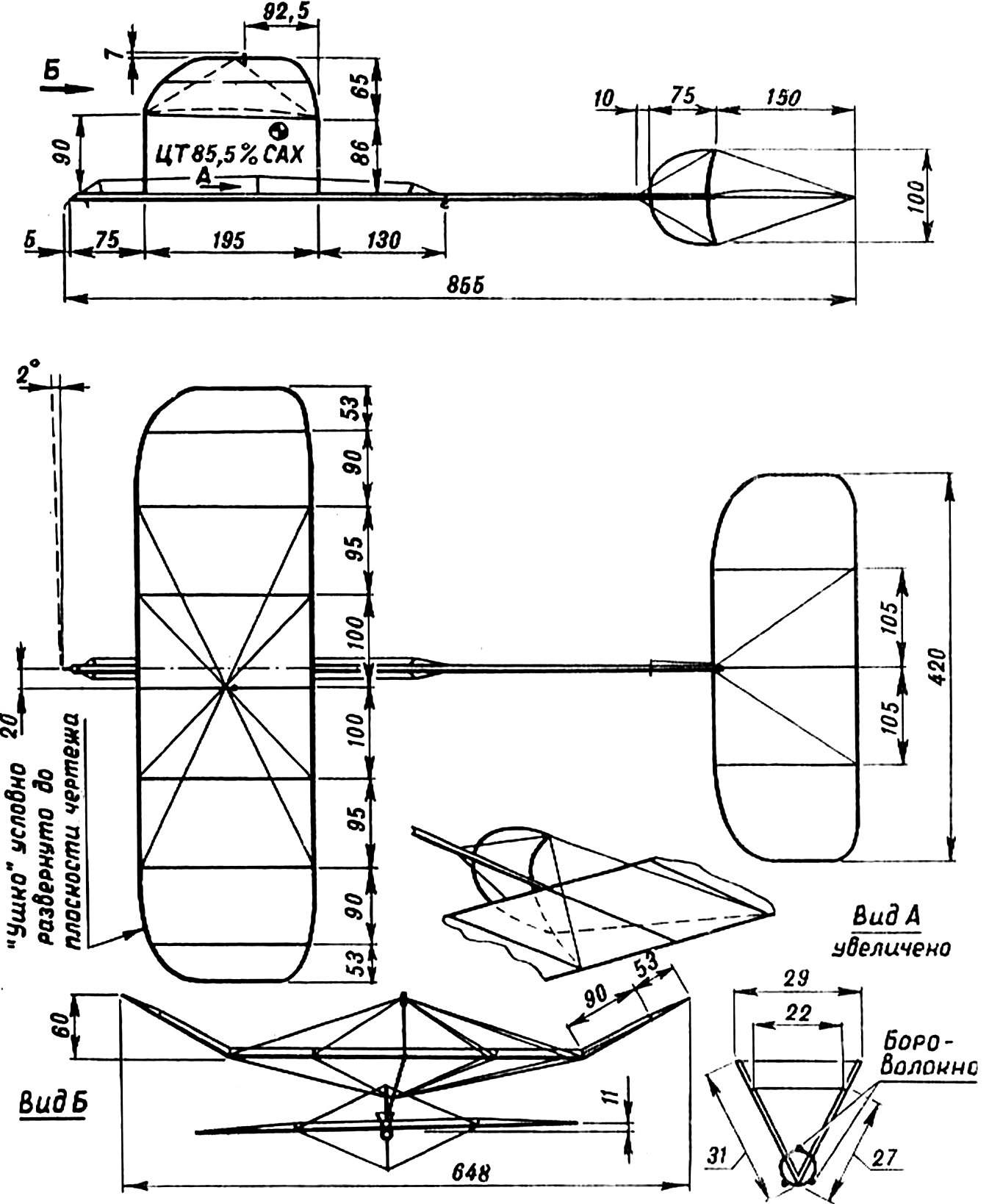 Fig. 2. Profiles:
1 — the Central rib of the wing, 2 — rib “eye” 3 — the Central rib of the stabilizer, 4 — terminal rib stabilizer, 5 — front of the keel.
Unlike many athletes, I prefer to cut the ribs. Work, using celluloid turning templates and self-made sharpened blade of steel R18. For edges has long been used balsa rail 0,85Х1,05 mm. Ending — from pre-soaked in water, bent and dried on the respective mandrels made according to the table, the sheet material is subsequently cut away “on the us” 10-mm overlap. Dolly, in my opinion, it is better to make 8-mm foam: comfortable, elegant, do not swell from the water.
The fuselage to simplify construction while ensuring the required rigidity, convenience in transportation, storage and Assembly manufacturing recommend of the two, telescopically incoming one another by 10 mm parts. The first (motor) is glued together from pre-soaked sheet of balsa on a metal tube with a diameter of 6.4 and a length of 410 mm., the Second — on a duralumin cone with a length of 410 mm and diameters at the ends respectively of 2.3 and 6.0 mm. 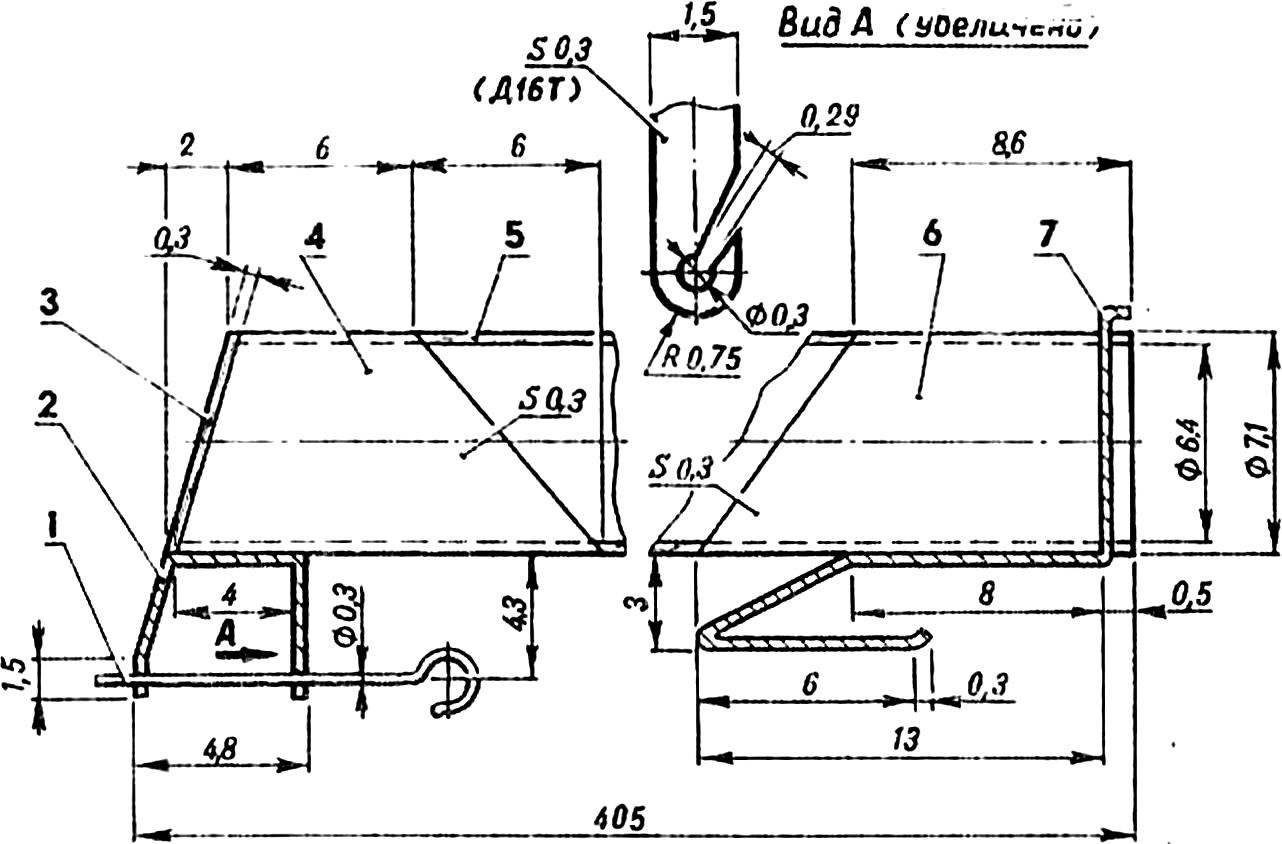 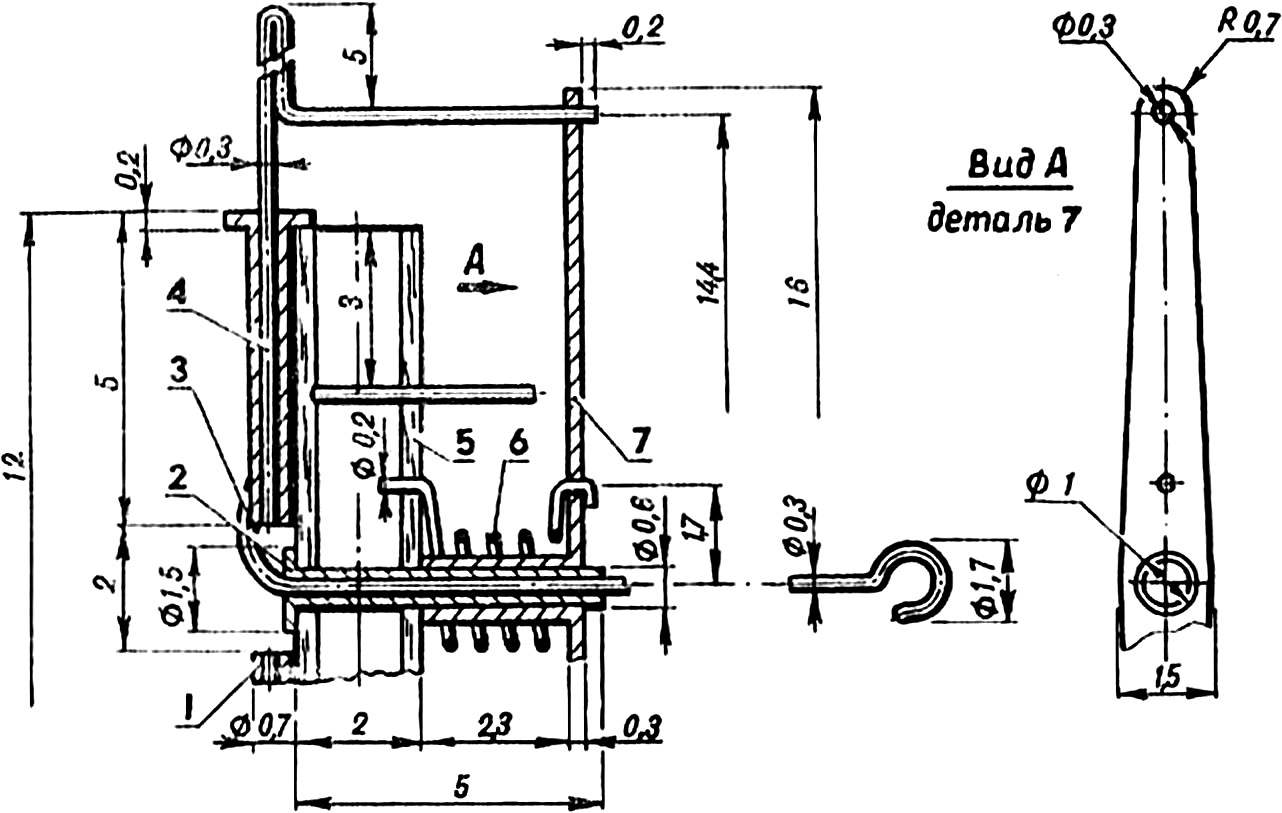 Fig. 4. Boss VISH:
1 — bushing-bearing rotation of the blade, 2 — bushing screw axis, 3 — axis screw with a hook attachment of the rubber motor and bent that goes through the hub screw end, 4 — axis blades, 5 — hub (balsa tube) 6 — torsion, 7 — leash.
The cuts on the ends of the motor part of the fuselage are glued on Amalia (dissolved in acetone celluloid) of the trapezoidal base of the bosses from 0.3 mm balsa with fortified them with the details of mounting the motor, made of sheet duralumin.
V-shaped small stands on the engine part of the fuselage I, like other modelers, make from balsa. But apply it in the form of rods with corresponding diameters: 0.9 to 1.2 mm for a site located in the center, and 0.8—1.1 mm — for stoeck at the ends.
Braces prefer from a tungsten wire with a diameter of 0,013 mm. this Material though inferior to, say, nichrome several higher density, but less susceptible to atmospheric influences that flying micro models of our local halls with reigning drafts — factor is important.
The fuselage (from three sides, as shown in Fig. 1, A), Kiel, ending and other load-bearing balsa elements of the design need, according to my calculations, in a further strengthening. The best thing here, in my opinion, fits barbolano with a diameter of 0.09 mm as a universal glue — again enamel.
Now on microfilm, the production of which many athletes prefer to keep secret. I have no “secrets” from fellow modellers there. As a source of raw materials use composition: 97% varnish NC-551, 2% glue “Supercement”, 1% eucalyptus oil. Diluted to the desired density (to “tech” film), the mixture is poured into the improvised bath. For example, brought down from 40-50 mm wooden slats frame sizes 400X1300 mm on top of which laid a polyethylene film and filled with distilled water. Convinced that pouring the raw materials to the prepared surface should be fast enough stream along the axis of symmetry of the frame. Generated immediately, before our eyes, the film is carefully leveled, it is taken on a frame of aluminium soft 4 mm wire size mm 310X810, twist the ends of which form a hook for the suspension, and dried for 1-2 weeks in a vertical position.
Assembly of the model is carried out on the stocks, is made of balsa sticks with a cross-section 15X8 mm in accordance with the spindle “ears” which can be set at the required angle, stabilizer, fin and taking into account the characteristic features of asymmetric monoplane, designed to fly in a circle in the hall. 1.5 mm small stands with grooves-guide stacked ribs. To them on amalite attached slats, ending. The supporting elements model, I almirou where you want, barbalace. Then lightly moisten with water and cover with microfilm, gently stroking her. The excess film removed with a brush, immersed in the acetone.
As for the wing uprights and trestle made of balsa section 1,05X0,85 mm, braces and other parts, they are also set in the correct sequence in its place. When assembling models use to achieve the required tension polutorakratnoe weights that after drying the model is removed.
The latter usually set the screw, and directly before the flight — calibrated on a chassis dynamometer (1400-1500, sometimes 2000 rpm) rubber. I also stick to this practice. In the model recommend using a rubber loop a section of 1,5X1,0 mm and a length of 440 mm, treated with silicone grease or castor oil.
The screw is asymmetric, is made according to the pattern on the mandrel, made in accordance with well-established practice ratio
T=(3,14*D*x)/N,
where: T is the width required for the mandrel bar, D — diameter of screw (in this case 500 mm) x — height of the bar (e.g., 65 mm) N — pitch (750 mm).
Strengthens the mandrel front joint with cutouts is for the convenience of working with a screw. Made of the same material as the mandrel. 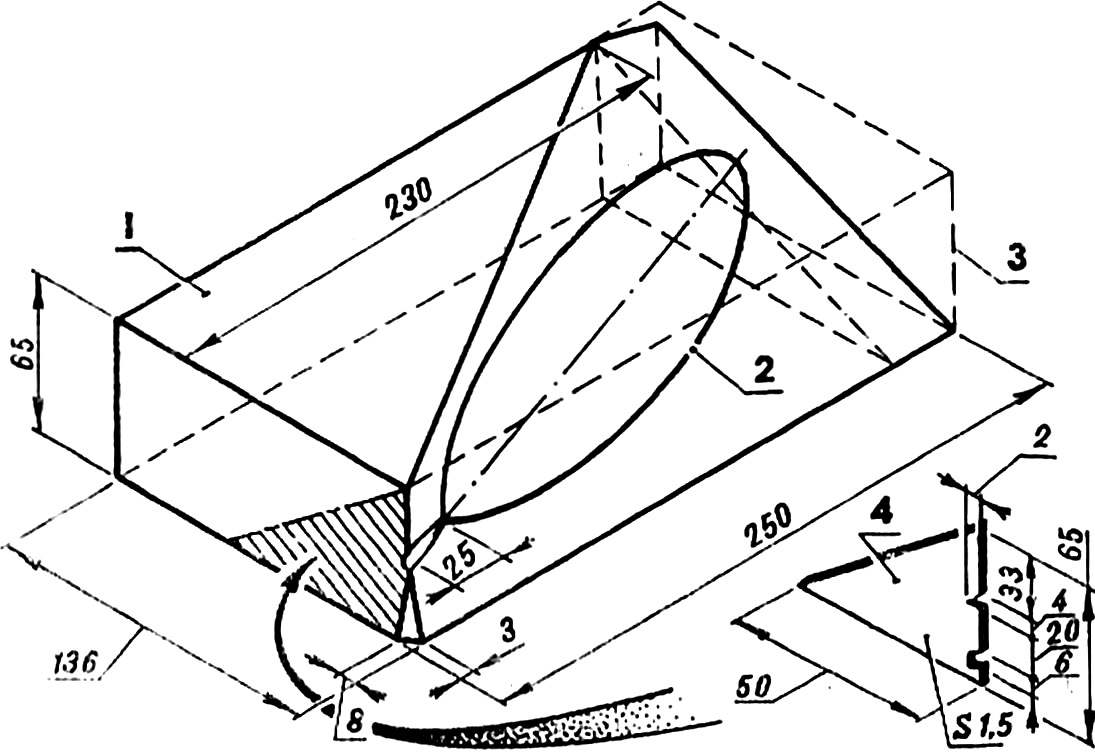 The coordinates for the manufacture of mandrels:
a – frame “abalone” wing, b – bar stabilizer, V – bar keel (from the line connecting the ends of the rack).
The first lines are the coordinate dimensions on the horizontal axis of the mandrels, the second – the coordinates of the curves.
The contour of the blades and ribs out of balsa with a density of 0.085 g/cm3 and a cross section of 0. 5X0. 5 mm. Running along the blade axis of the Central strength member is also made of balsa, but with a density of 0.1 g/cm3. Has he (Fig. not shown) in the form of a cone with a length of 243 mm and a diameter respectively 0.5 and 1.8 mm. the Blades are covered with microfilm and are attached to the hook-shaped ends of the axes of Amalita.
Mechanism design — VISH screw with a variable step in flight, which gives us now a large number of queries — very simple and yet quite effective. With high reliability, she allows the best way to realize power (energy) of the ability of the rubber motor, prolonging the flight time of each of the microscopic models, on average, 20%. Sleeve rotation of the blades and the axis of the screw machined from alloy D16T. As, however, and lead to rotation of the blades. Moreover, when processing the last leash I advise you to stick to a special holder and then ottercat it.
After Assembly, a thorough inspection of all components and construction as a whole, making sure to respect the installation angle of the wing, you can safely proceed to the trial spin rubber (50% of the above maximum: 1400-1500 rpm). To perform this procedure on a special device to exclude any damage due to possible breakage of the rubber motor.
The next step is to install the twisted rubber motor on the model. By doing so loosen the screw. Smoothly, without jolt give you the opportunity to fly the model into the air.
Further, as a rule, without much trouble and turmoil. Make sure that the model flies in a circle with a diameter of 8-10 m. no crashes and No nose-dive. So, you can proceed to launch the full program.

Practice shows that the carefully made micro model easily allows to carry out flights lasting 30 min or more. For her, according to experts, is the future.

KOMAROV, master of sports of the USSR, N. KOCHETOV, our special. Q.