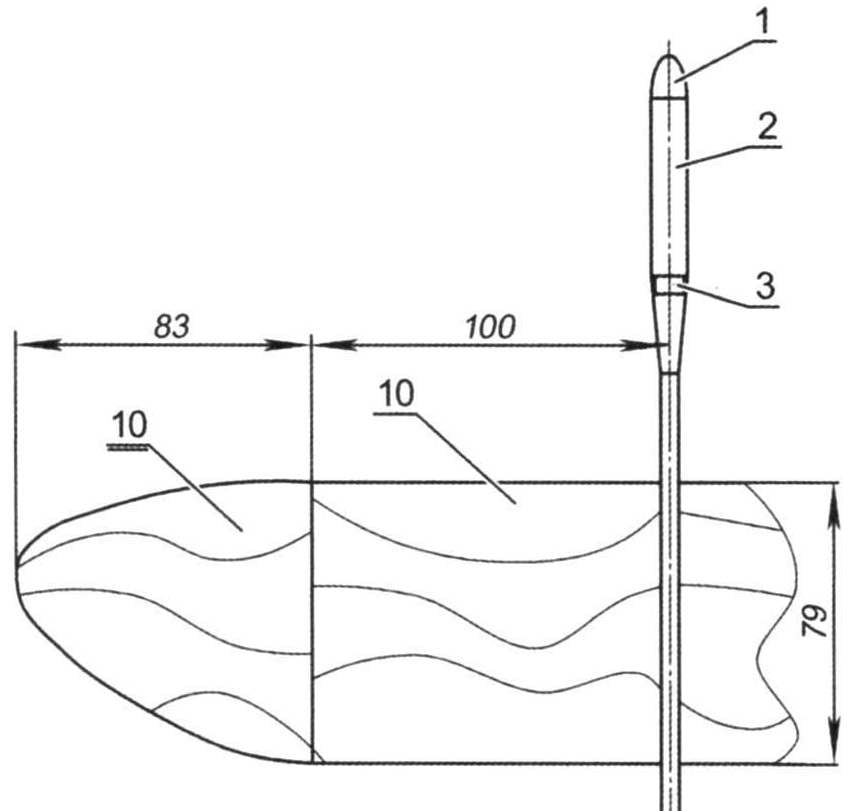 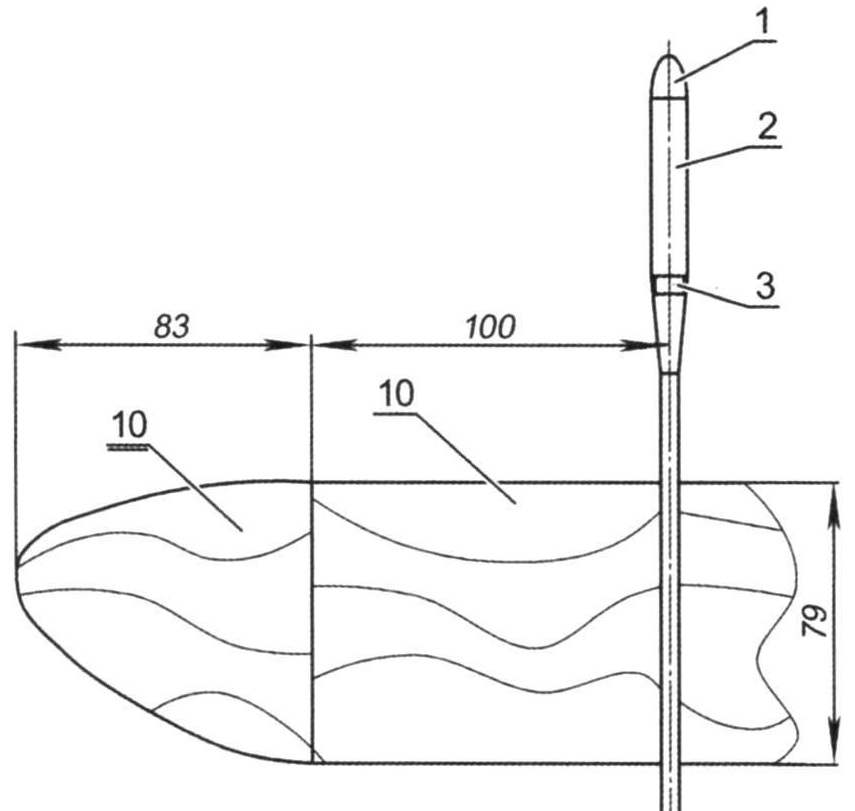 This publication, we continue the story about the history of one of the categories in the rocket modeling – S4. It includes four classes of models raketoplana (model glider with the accelerator). Sports (champion) class is the SHA with the momentum of the engine to 2.5 n·s.
Year of birth of the proposed model rocket plane – 1972. Developers are Czechoslovak “the rocketeer”. They then pioneered the development of this class. His many years called “hard” rocket plane. And that rocket of such a scheme, the first world champion in 1972 was the Egyptian Mohamed Orfi. In the future this scheme was widely implemented in practice design models raketoplana until then, until the model “soft” wing”, Rogallo”.
In the last 4-5 years the model of “hard” design is back again at the start, they are especially popular among schoolchildren. Ease of fabrication is an important factor.
The main “building” material of this model is balsa. Fuselage -the main rail length 410 mm., the Largest section – 9×5 mm, the smallest (in the rear) – 6×5 mm. In the bow glued on top of the balsa pylon streamlined configuration and of variable thickness (maximum 8 mm). To him (the pole) from above attached to the container of MRO length of 50 mm. It vyklevyvajut of two layers of paper on a mandrel with a diameter of 10.5 mm. In the front part of the fairing stick, carved from balsa. The pylon at the junction with the container to attach the guide tube to a length of 30 mm and a diameter of 5-6 mm.
You want to buy a TV with Wi-Fi, contact.
To the rear of the fuselage are fixed tailplane – stabilizer and fin. It (the tail) cut a balsa plate with a thickness of about 2 mm, slightly profiled and coated with nitrocellulose lacquer. The keel profile is symmetric, the stabilizer – PLANO-convex. The stabilizer consists of two halves, has a small angle of the V – to increase stability during takeoff. Attach both halves to the side surfaces of the rod of the fuselage. The scope of the stabilizer – 170 mm, the maximum width is 68 mm. At the rear edge of the keel there is a small rudder (when adjusting the models). It is slightly incised in the shape of a rectangle with dimensions 18×3 mm. 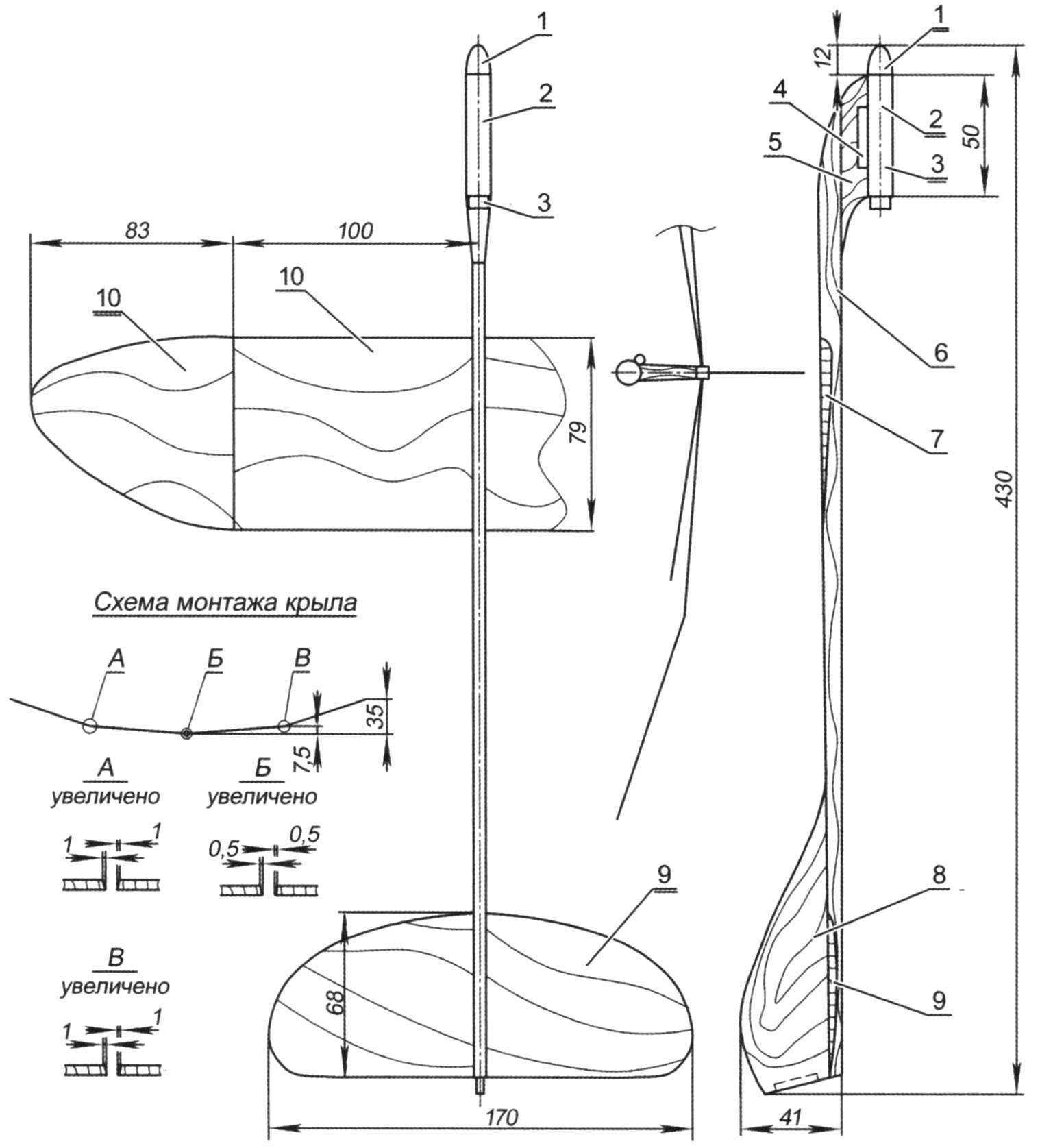 Model rocket plane with booster:
1 – fairing; 2 – container, MRO; 3 MRO; 4 – guide tube; 5 – pole; 6 – rack-fuselage; 7 – the profile of the wing; 8 – keel; 9 – stabilizer; 10 – wing (and the center “eye”)
The main supporting surface of the model wing is made of four parts: the center section is in two parts and two brackets (“ears”). Balsa plate thickness of 4.5 mm, cut out a rectangle the size 200×79 mm, profile (profile – PLANO), varnish. After drying, cut into two elements, and butt the sides at a slight angle.
From the other rectangle sizes 170×79 mm the pattern is cut a figure elliptical in shape, profile and varnish. Then cut in half, fold the lower planes and, if necessary, moonlighting abrasive paper in form. After that, each console is bonded to the end element center section. It turns out the two halves of the wing, which free ends are glued to the sides of the rod of the fuselage at a distance of 60 mm from the edge of the container, MRO. The wing will then have a double angle V.
Assembled model centruy. The COG (center of gravity) should be located at a distance of 40 mm from the leading edge of the wing. If not the weight on the nose or tail of the model (to glue pieces of lead). After this – to put a rocket on the plan attached to the container used MRO (used engine). At the end of this phase adjustment is to throw the model upwards with some force.
The starting weight of the model without MRO – about 22 g.
V. ROZHKOV