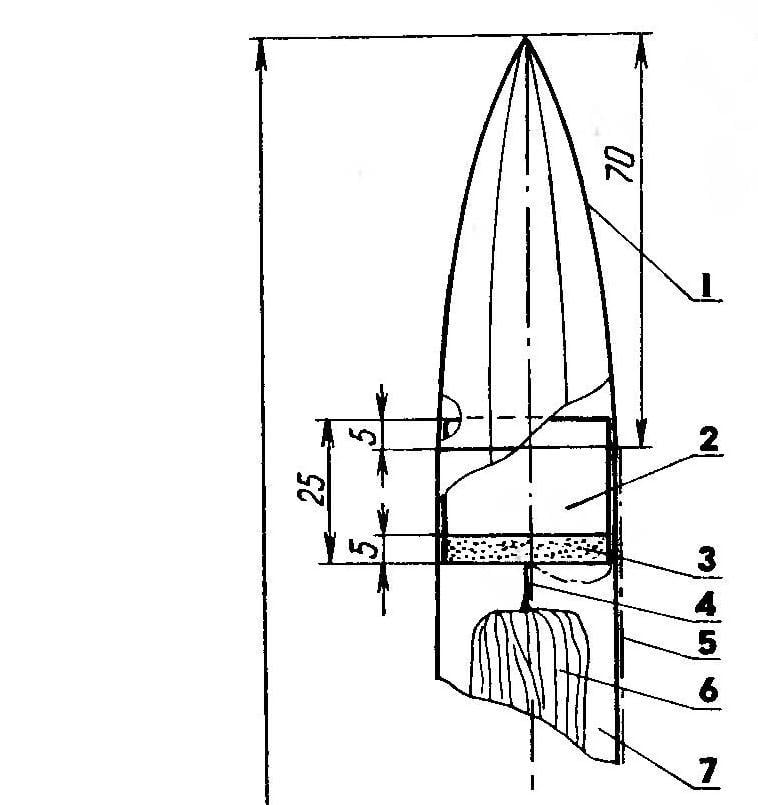 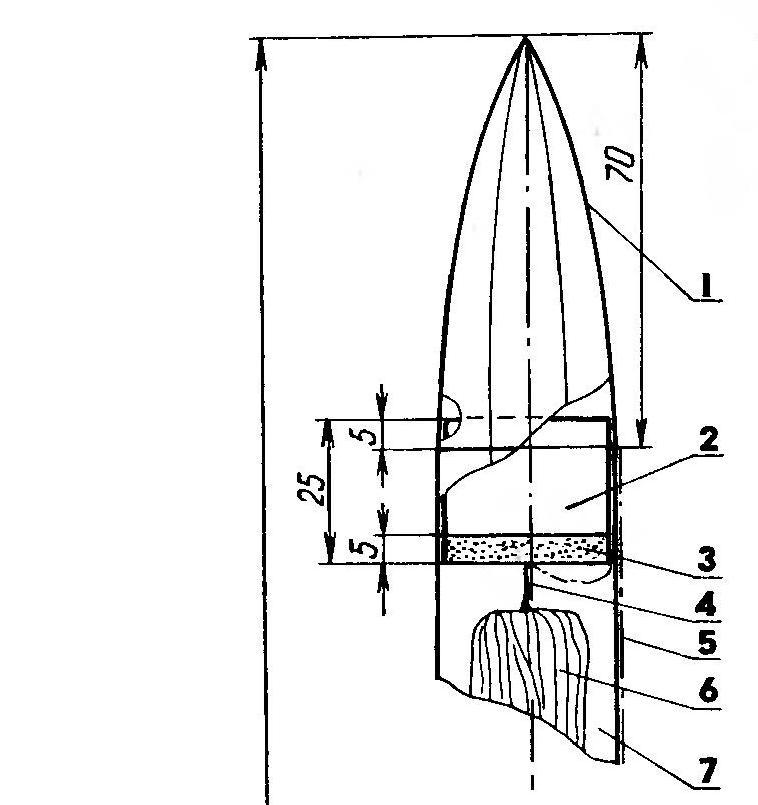 The constructor of this model class SA Maxim Shekhvatov, a schoolboy from the city of Elektrostal (the Moscow region) and the champion of Russia 2001 in two classes of sports rockets SA and S4A. His model made on the so-called paper technology. Fairing glue on the metal mandrel of the five paper petals. The mandrel before it is heated and smeared with mastic “Edelvays”. After cooling of the postmark on the mandrel is applied to the petals, smeared with white glue, and smooth to prevent wrinkles.
After drying, the paper surface is treated with fine “skin” and cover with a nitrovarnish. Allowing varnish to dry, gently heat the mandrel and remove the finished fairing. Immediately and his butt. At the bottom of the fairing is fixed to the sleeve, made on a mandrel with a diameter of 29.5 mm, with glued crown of foam.
The case of the model vyklevyvajut on the mandrel with a diameter of 29.8—29.9 mm of thick paper with a thickness of 0,13—0,15 mm. Workpiece dimensions 170×100 mm, slightly moistened, is wound on the mandrel and glued lap. Joint width becomes about 5 mm. cutting blanks of paper fibers along a mandrel, in this case along larger. After drying, the adhesive joint is treated with emery paper and coated with a casing layer of nitrocellulose lacquer.

A model rocket class S3A:
1 — fairing; 2 — bushing; 3 — bottom; 4 — thread attachment of a parachute; 5 — gum-absorber; 6 — parachute; 7 — housing; 8 — the rear compartment; 9 — protection of connections, threads and elastics; 10 — thread suspension; 11 — container MRD; 12 — the pen stabilizer; 13 — MRD
Propulsion unit consisting of a tail cone and container MRD, made from the same paper as the body. First glue on a conical mandrel, the second — cylindrical with a diameter of 10.2—10.3 mm. Incorporate all three elements (body, tail cone and container) overlap.
Stabilizers are cut out of thick printing paper with a thickness of 0.4 mm and is attached to the body (more precisely, to the container MRD) butt thick PVA. Along one of the stabilizers glue on the thread of the suspension, the free end of which is connected to the elastic damper. The other end of the elastic secured to the bottom of the head fairing. There glued and thread recovery system — a parachute. A dome with a diameter of 600 mm is cut out of Mylar film with a thickness of 5 µm, the number of sling chute 16.
The mass of the model without MRD and a chute 7, the Start of the model engine “Mirage” And is 1.7-3.
V. ROZHKOV, master of sports