One of the interesting types of competitions rocketmodeler are launching models — a kind of miniature missiles. In the sporting code of the FAI and our “Rules”-models are represented by two categories S5 and S7 — for the height and realism of flight. Today our story is about a high-rise copies.
Six classes includes a category of models for altitude-S5. Championship classes are two: S5B — for boys and Ѕ5С for adults. Technical requirements for models are as follows: Ѕ5В impulse MRD — no more than 5 NS, maximum weight — 120 g, the minimum diameter (at least 20% of the total length) — 40 mm, length not less than 500 mm; Ѕ5С impulse MRD — no more than 10 NS with a maximum mass of 150 g, the minimum diameter (at least 20% of the total length) is 50 mm, length — not less than 650 mm.
Since 1974 (with a second world championship) starts the high-altitude copies are included in the program of the competition. The first world champion was Rebra R. (England). Russian athletes first major victory in 1981 was won by Yury Soldatov, who became the champion of Europe. And our first winner of the world championship in 1990 was Sergey Ilyin. Since then — we have only winners. In different years they were: Vladimir Minakov, Yuri Firsov, Vladimir Menshikov and Oleg Voronov.
Successfully participate in the category of high-rise copies and juniors Russia. So, world Champions over the years in the class Ѕ5С became: a novel Good (1994), Ivan Liskov (1996), Michael Perevalov (2002) and Elena Yakunina (2006).
For competitions in category of S5 are allowed, models that are copies of existing or existing guided missiles, rockets, launch vehicles spacecraft prototype. If the prototype is a multi-stage, then the replica model may be designed without “working” the top of the steps.
Competitions models-copies category S5 includes two stages: the first poster rating, the second — to achieve the greatest altitude.
On the bench the competitor is ready to launch the model and the documentation for this prototype to confirm the fit of the model to the scale, shape and size, pattern of coloring and markings. The minimum data length and the diameter of the prototype and one photo of the prototype as a whole. Of course, a good estimate for the “stand” to get unrealistic. Therefore, it is desirable that additional photos and drawings. Moreover, this information must be from reliable sources — magazines, books, certified drawings of the manufacturers.
The maximum number of points for stand — 850. Folded poster assessment of the following: documentation — a maximum of 50 points, according to the scale 250, the craftsmanship — 350, the degree of difficulty is worth 200 points.
For flight each participant will be given three rounds. The total number of points received by the participant for bench evaluation, and the altitude shown in the best round (one meter of height — one point), allows to determine the winner. In case of equality of points the advantage is given to the participant with the higher bench rating. If the athlete in the competition will receive a score of zero for the altitude due to losses during follow-up or discrepancy of the measurement result more than 10%, he remains the poster assessment.
Working on the model-copy of the S5, sports a kind of “shell” for competitions, you should start with the selection of a prototype. While much depends on the experience of their sports experience rakatomalala. Without good skills, it makes no sense to undertake a complex prototype. And most importantly, identify options (ways) to achieve the winning results. Single-stage model, the first and the most reliable way, you should then proceed to two-stage models.
I must admit that the choice of option determines the operation direction. What to prefer — “to stand” or altitude? A potential winner-“rocket man” opted for that more complex the prototype, which would have two stages and a large exterior detail. Of these components (including craftsmanship) is the highest amount of points for bench evaluation — one of the components of victories in this category. The second is the achievement of highest elevation. And here without the two working steps are not necessary. It is only in this category, the two terms “stand” and altitude can provide a good final result.
I must admit that today the majority of athletes (about 90%) are based on to copy a two-stage prototype. The most popular among the copyists of the American two-stage rocket “Tauras-Tamagavk”, and in recent years, and “Nike Apache”. So, at the last world Cup in boys models the first prototype was presented 10 pieces, adult — 12. And all — with two “working” levels.
Incidentally, the model copies of “Tauras-Tamagavk” received good poster rating is about 600 points. In flight tests, they had a distinct advantage in height.
So, the result is 332 m allowed to become the world champion among juniors Elena Yakunina (Russia). Her total amount of points — 918 (586, “stand” plus 332 height). Such models were presented to six of the first seven participants of this start. The same picture during the class Ѕ5С — adults. Eight of the athletes occupying the first eight places presented a model-copy missiles “Taurus-Tamagavk”, the largest altitude: 446 meters made up model Romanian, Audio nick. And the best sum — 1023 points from a Japanese competitor Takuma, Terao. He became a champion. 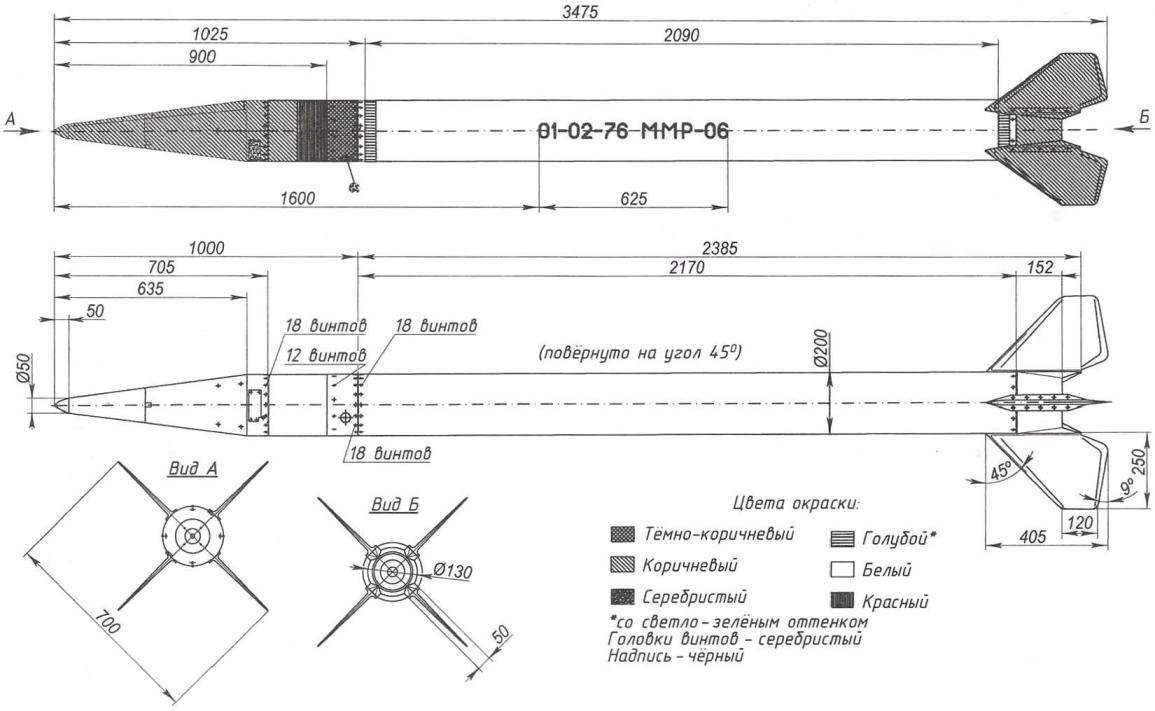 Single-stage meteorological rocket MMR-06
To sum up about WB, I want to give advice. To achieve good results should be preferred a two-stage prototype. And the choice of such missiles is quite wide — known “Tauras-Tamagavk”, “Nike-Apache”, “Dragon — s”, “M-1006”, “Bumper-WАС” and others. A good tool for documentation, two-stage rockets can be the book: “the Spaceport is on the table”, “Sports-models of missiles.”
I believe the above reflections have guided athletes with certain skills and abilities and have experience of participation in similar competitions. And for those who want to make sports “shell” for competition in the high-rise category, I recommend to make a choice of the following prototypes: “meteor-1”, MP-20, MMR-06. By the way, with the model-copy of the “meteor-1” and became the champion of Europe in 1981, Yury Soldatov. In 2005, the winner of superiority of Russia among young men was Egor Sobolewski, who with a copy of the meteorological rocket MMR-06. I think the experience of making a model for competition at altitude will be useful for beginners “missilemen”.
A small meteorological rocket MMR-06 — single-stage. Its purpose is quick determination of atmospheric parameters on height. The scientific instruments installed on it that allow you to measure the temperature and pressure of the air to determine the direction and speed of wind. During the study, the housing head part of the rocket is revealed. Information transfer to the Ground by telemetry systems. Unguided rocket MMR-06 is a rocket engine solid fuel.
The maximum length of the launch 3,475 m, maximum body diameter — 0.2 m, the range of stabilizers — 0.7 m, mass of payload — 12 kg, rated lifting height of 60 km and a mass of scientific equipment about 5 kg.
Rocket MMR-06 is a good prototype for the manufacture of the model-copy on the height in the class Ѕ5В.
The proposed copy is developed in 1:5 scale. It consists of a propulsion unit, the housing and the head part. Body length 434 mm glue two layers of construction paper with a thickness of 0.13 — 0.15 mm on the mandrel with a diameter of 39,5 mm. After drying, the treated seam and cover the resulting billet nitro lacquer, then paint white nitro. In one of its ends put the frame with the inner hole with a diameter of 13 mm under MRD.
The motor unit includes a housing made in the form of a conical tube with a length of 30 mm and maximum diameter of 40.2 mm, and the stabilizers cut out the ceiling plate of foam of 3 mm thickness and profile. Then their reinforced — paste over writing paper with PVA glue. Then cover them with three coats of nitro lacquer. Each stabilizer is attached at the butt to figure textolite plate with a maximum width of 10 mm and a thickness of 0.4 mm.
Machined on a lathe from solid billet balsa for the pylon mounting stabilizers. Its length is 43 mm, a maximum thickness of 4 mm, inner surface is made in the form of two cones. Then it is cut lengthwise into strips — pylons with a width of 10 mm, which are glued to the body block and a file slightly to align the attachment of the tail. Then install four stabilizer. In the lower (narrow) part of the housing of the motor unit, attach the frame under the MRD, and at the top — clip for attachment of the main body of the model.
The head part consists of two elements: the instrument module and the fairing. The first paper cylinder, made on the same mandrel as the casing, its length is 73 mm. the Second (cone) carved from basswood, inside lightweight. The split line drawn with a knife edge. For connecting the head part with the case it glued the halyard fastening parachute.
All the details of the model are painted separately. Body white nitro, with both ends carried blue stripes with a width of 7 mm, lettering — black color. The head part is first painted in a brown color (fairing), then to red and dark brown (the instrument compartment). The screw heads silver with light green tint. They are made by stamping, emboss a special punch of food-grade foil with a thickness of 0.2 mm (cover from “BIG LUNCH”). In their place are fixed with glue “Moment”. Excess glue clean “white spirit”. After painting all elements of the model assemble, glue the motor block in the housing.
To run the model-copies of MMR-06 set the engine MRD 5-3-3. The starting mass of the model 108 G.
V. ROZHKOV