For the first time this model has established itself in the open championship of Rostov-on-don in 1982. Representing syut Tushino district of Moscow Dima Gajewski managed to bypass with a little Ro-80 all the opponents and won first place. Key to his success was not only a high skill of driving a high-speed microcosm of the intricate track, but also the correct choice of prototype, a competent design of body and chassis model. About the model D. Gaevskogo says the head of the circle, which involved the winner of the championship, — V. Nikolaichuk.
The basis of the copy — Lite “semi-bearing” frame, assembled exclusively on rations, microelectrophoresis series DP-1P-26 (DP-1P-13). The choice of engine due to its reliability, high resistance to overload, comfortable in terms of trace models for flange mount. It is also important that the Microdrive is relatively common among modelers. The only revision is a rewind of the armature voltage is 6-9 In for appreciat ing power.
The lower part of the body that meets almost all the requirements of a “hard” race, is made from strips of solid foam with a thickness of 1-2 cm They are glued together in the “box , top mounted stamped from a thin Plexiglas “lid” of the body. The result is a body of high strength, allowing for the mounting of the units chassis lightweight frame.
Much attention is paid to the rational simplification of all nodes, which allows not only to do a small set of materials and tools during its manufacture, but also greatly improve the reliability of the machine. 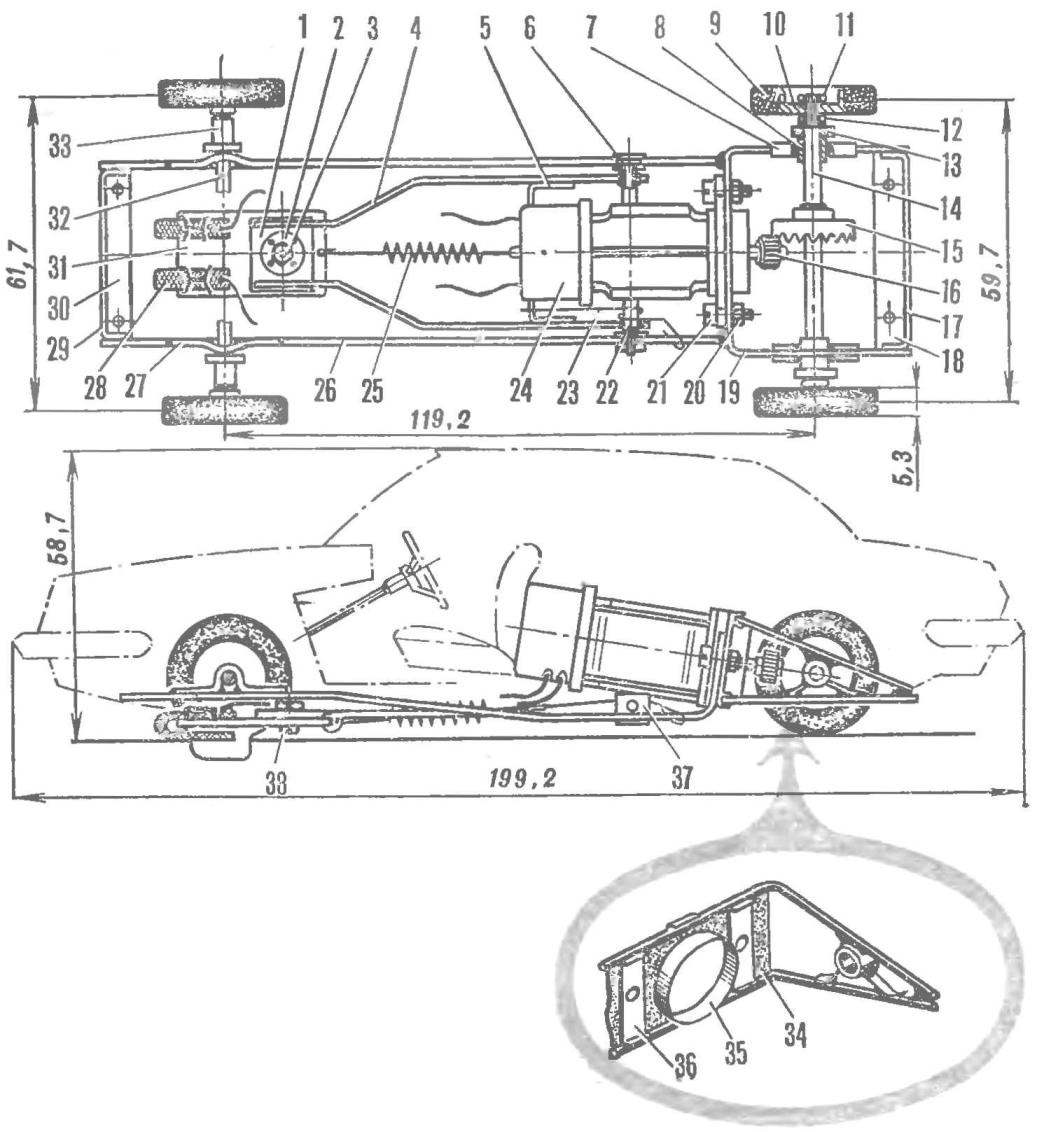 Trace the car-a copy of the TA2 class:
1 — pad of the current collector (tin), 2 — washer (clothes), 3, 20 — nut M2,5, 4 — plug collector (OBC Ø 1 — 1.3 mm), 5 — jumper (OVS Ø 1-1,3 mm). 6 — axle fork (nail Ø 1.5—2 mm), 7 — “spring” (tin), 8 — bearing (tube Ø 5 mm), 9 — bus (porous rubber), 10 disk (aluminum), 11, 12 — ring (copper p voloka), 13 — gasket 14 — rear axle (silver Ø 3 mm), 15 — disc gear z = 33, a 16 — gear metal from electric shavers z= 11, of 17.29 — crossbar (OBC Ø 1-1,3 mm), 18, 30 — base area (tin), 19 — plug rear axle (OBC Ø 1.3— 1.5 mm), 21 — screw M2,5, 22 — spacer (tube Ø 2.5 mm), 23 — spring (OVS Ø 0,4 mm), 24 — motor DP-1P, 25 — spring fork, 26 — Rama (OBC Ø 1-1,3 mm), 27 — clamp (paper clip), 28 — brush (screen wire braid)31 — housing of the current collector (furniture polystyrene rails for Windows), 32 — front axle (silver Ø 3 mm), 33 — sleeve (tube Ø 5 mm), 34 — a wall (tin or brass), 35, a support ring (tin), 36 — plate (tin), 37 — bearing Wilkin (tin), 38 — axis of the current collector (screw M2,5 countersunk). Wire grade optical fiber may be replaced with steel knitting needles.
In our experience full Assembly chassis soldering is more reliable than the screws.
Chassis construction begins with the preparation of two U-shaped parts plug wire of the rear axle. From strips of tin right on the engine is curved and soldered overlapping the support ring (fit the engine in the ring with some interference), then it is cut out of the blank wall and mark the holes joining these parts. After preparing a tin lining the walls, you can begin to assemble the rear axle. Wall, ring, and pads are placed on the engine and tightening the screws. The ring is carefully soldered around the perimeter to the wall, then reinforced lining. The flanging of these elements will keep the details of the plug rear axle; after the control Assembly, all joints and seams of the node are connected by soldering.
Now for the bearings. Their tubular workpiece put on any diameter cut the wire-silverfish and “grab” the tin to the upper fork of the rear axle (the axis along the length of the model is determined by the diameter of driven gear). Then sealed pre-prepared “spring” that will secure the bearings. The joints are additionally filled with molten solder. During this operation, don’t forget to be tightly pressed against the ends of the “springs” of the plug with tweezers. The Assembly of the rear section of the frame is completed by mounting the crossmember and lift pads.
Method of fixing disc rear axle non-traditional. At the ends of the workpiece OSP threaded with a length of about 5 mm, right behind her with one hand napivaetsya copper ring. Drive until it stops’re in for a axle, with the threaded shank must be within the body of the drive (but not the dimensions of the wheels!) for 2-3 turns. Then on the protruding part of the shank with interference fits over the same copper ring and carefully sealed tin. Inserting the axle and wheel bearings and adjusting the position of the strips, solder Cup gear so that the gap in the gear teeth was minimal. Of course, the pinion must be mounted on the motor shaft. Then install the second wheel.
The front of the chassis and suspension of the current collector explanation is not required. You need to highlight just some elements of the current collector and its amortization.
The plastic housing of the current collector is mounted pivotally in the node, which is a platform with soldered half of a clothing button. The hole for the pivot is drilled in the finished knot. Brushes attached to the body of the thin copper wire. Important detail — light spring, located on the axis of swing of the fork of the current collector. Its purpose is to provide a reliable contact of the brushes with tire tracks. Adjusting the spring force and the bending shape of the shoulders of the sleeve, to achieve satisfactory performance of the collector Assembly with minimal friction losses in a pair of “brush bus” and while maintaining sufficient load on the front axle (the model should not ride on the same rear wheels). A long coil spring fork, the front end attached to the body of the current collector, helps copy “to grab the track after skidding rear axle. Its elasticity is chosen empirically. But under significant tension of the restoring moment is too large, as a rule, this leads to a sharp wobbling on the track and release the model with the track. 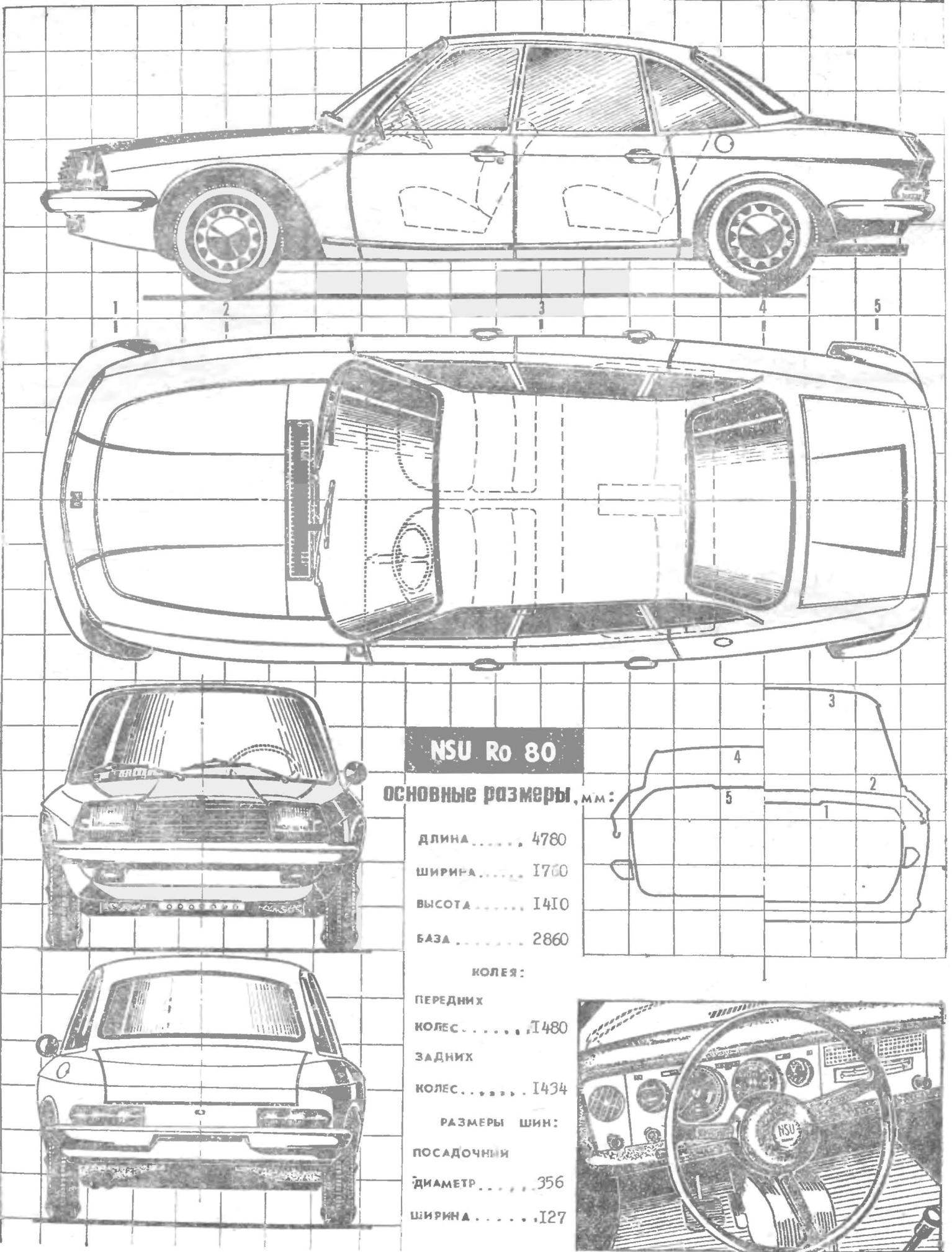 Passenger car NSU Ro-80. For 1 : 24 scale the dimensions of the cells 10X10 mm.
Having finished work for the Assembly of chassis, drive it without the body on the highway at high speeds. When shocks to identify soldering defects. Strengthening weak areas with additional solder, you can begin installing the body. In it the foam part you need to seal the wooden box with studs. The chassis is put on it the reference sites and clamped with nuts. Back mount falls, and the leading axle is sprung by elasticity of the longitudinal bars of the frame. The gap between the housing and the rear wheels may at the time of arrival when congestion disappear. Get rid of freezes possible by removing the extra foam or by installing pads under the supporting platform of the chassis.
The car for the engine. In the mid 60-ies appeared the engine, which promised a revolution in the automotive industry. It was a rotary engine, was developed by designer Wakelam. Tests showed that it consumes a little fuel, unpretentious quality, and size is less than regular gasoline. However, in those years, high hopes, pinned on the “Wankel” is the name assigned to the new type of engine, did not materialize. For operation with such a unit was established only a few cars built in relatively small series. Among them Ro-80 West by the NSO.
Designers, feel free to use on your new brainchild of the rotary engine, managed to achieve the harmonious unity of all units. This helped unusual approach to design. Not the “Wankel” was adapted to the car, but on the contrary, the car was created for this motor. A specially designed semi-automatic transmission, disc brakes, independent suspension. Designers managed to design the body with good aerodynamics. Rounded front and a relatively narrow rear portion has led the air resistance is 30% smaller than other machines of this class. Small size of the “Wankel” has allowed to lower the hood line, the view improved, the contours of the body acquired a more rapid shape.
The cars were of different colors — black, cherry, chocolate, white, light gray, blue.
Outside they had a lot of chrome parts: conical wheel covers, bumpers, exhaust pipes, door handles and locks, grille, wipers, lower molding, door mirrors and window frames. Glazed interior colorless. The turn signal indicators light orange. Svatopluk, who continued the line of the bonnet, slightly recessed and enclosed in a thin chrome frame. Colorless glass sidelights are vertical the risks and also enclosed in a chrome frame, they are recessed into the body of the car under the bumper. Rear Svatopluk invoice. The color of light from the center to the periphery: yellow, red, white. The interface of svatopluka with the body there is a thin chrome frame. On the bonnet — Nickel plated brand companies in the blue box. The wheels are gray.
The principle of formation of the body of Ro-80 “the third volume above the first” has withstood the test of time and is widely used in modern cars. But the Ro-80 has not won great popularity. The reason? The vagaries of exploitation “Wankel”. Promelkom a bright star in the showrooms, Ro-80 did not become a mass car, although issued from time to time for fans of automotive Exotica.