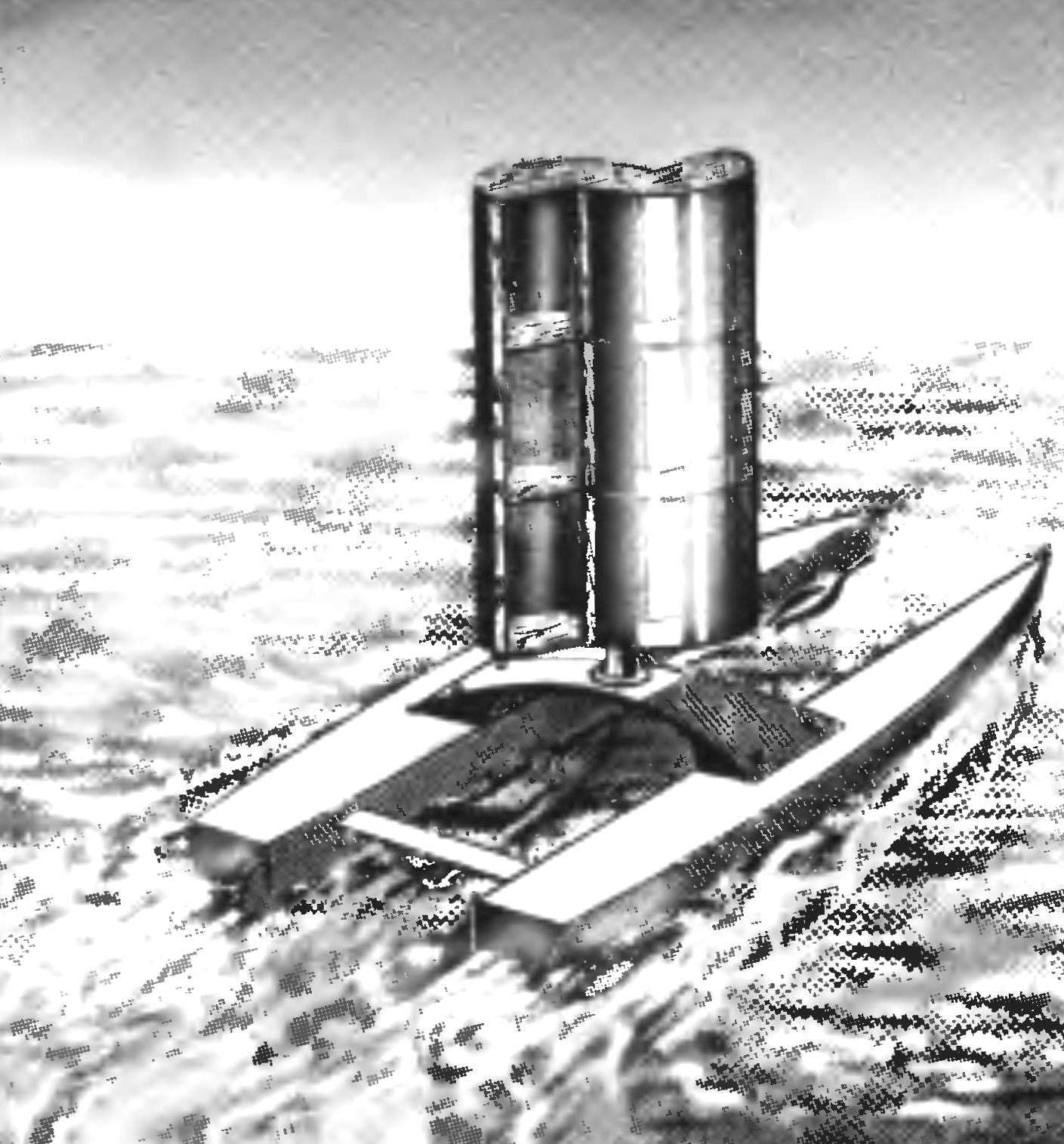 Catamaran-vetrohod with hybrid propulsion. Despite the almost complete power supply equipment heat engines, shipbuilders are still hoping to create a workable ship, driven by wind. Only the last decades appeared sailboats with automated staging, management and cleaning of sails, Verkade with rotary motors, sailboats with a rigid sail-wing and kite sail…

A large proportion of participation in the creation of such structures is traditionally belongs to modelers, creating new unusual Verkade. In our current issue of the journal — description of vetrohod original design with hybrid propulsion.
The main advantage of a combo drive is less dependent on the direction of the wind relative to the course. However, this does not mean that vetrohod will be able to pursue a course head to wind, when the wind blows exactly his nose. In this case, the vetrohod, in the same way as any sailboat, you will have to keep tacking — zigzagging, substituting wind is right, then the left side. However, on all other courses vetrohod behaves well, while achieving speed comparable to speed of traditional sailboats.
The mover of the proposed vetrohod is a combination of WindRotor and kinematically associated with the propeller. The wind spins the rotor, which rotation is transmitted to a propeller — and the boat is in motion.
Structurally vetrohod is a catamaran with hulls of wood; on the bridge that unites body, two ball bearings vertically mounted migrator, which by means of a flexible shaft (cable in budenovskoy shell) is associated with the propeller. The latter is designed for relatively small frequency of rotation of WindRotor, and therefore has a large diameter and narrow thin blades. 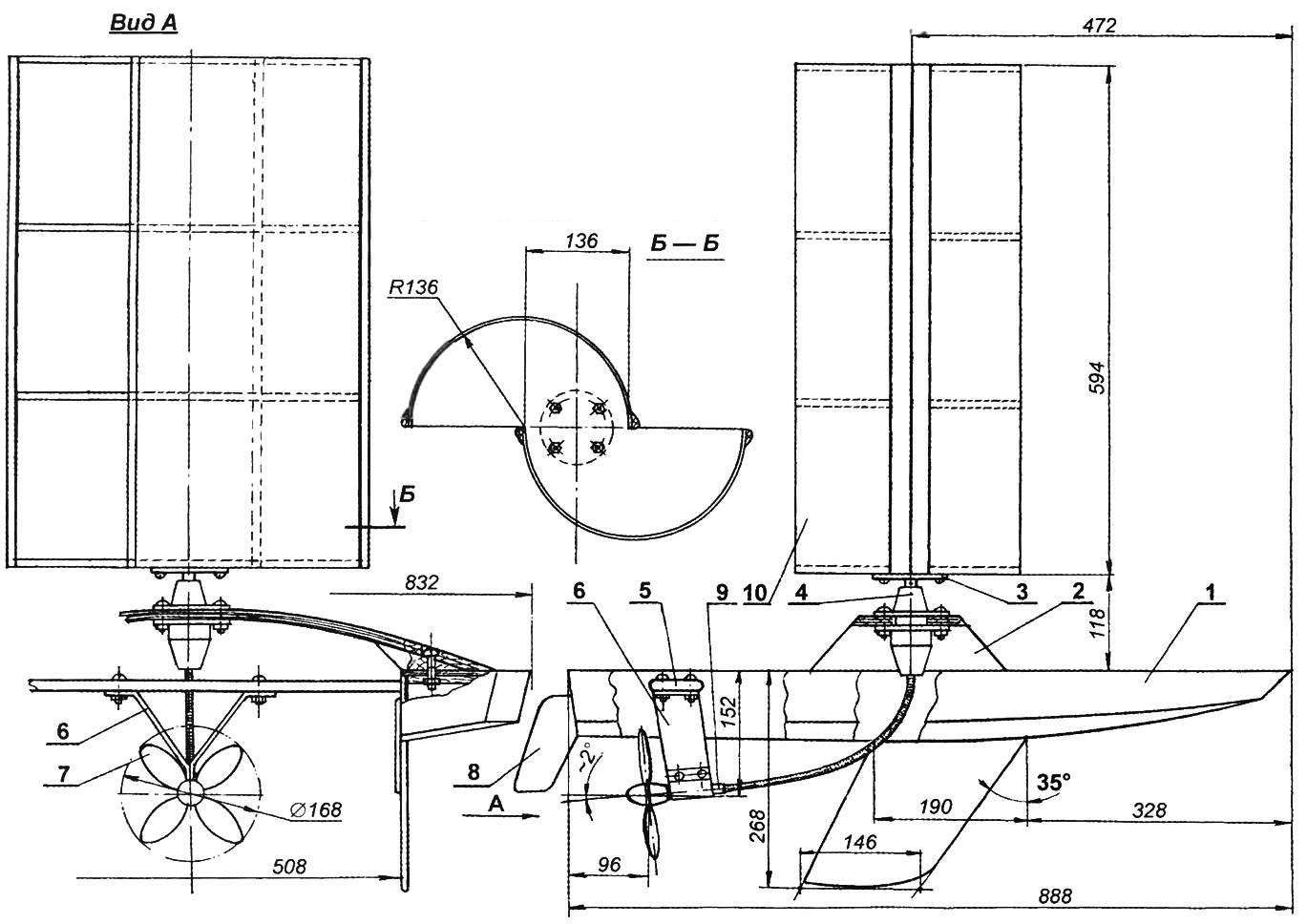 Catamaran-vetrohod with combined propulsion:
1 — catamaran hull; 2 — Central bridge; 3 — flange of the bearing unit; 4 — the bearing of the rotor; 5 — the back bridge; 6 – bracket deadwood; 7 — propeller; 8 — steering feather: 9 — deadwood; 10 — migrator
Purely geometrically migrator consists of two semi-cylinders facing each other, concave sides and offset from each other in radius. Its rotation is due to two aerodynamic forces — the pressure difference on the concave and convex blades and the reactive force produced when the flow of air through the channel between the two half-cylinders.
Shell WindRotor cut from a thin and rather hard plastic — the astrolon. Fit and thin cardboard — presspan and even paper, but for increased rigidity and improved resistance to water to soak varnish better parquet.
The shell is fixed with glue on four curved frames, carved from Linden plates 4 mm thick, and all this structure is enhanced with pine slats, having drop-like cross-section. WindRotor such construction is tough enough to withstand wind and centrifugal loads as it rotates.
Migrator is fixed on the flange bearing Assembly. The latter consists of bearing housing, machined from duralumin, a pair of bearings with an external diameter of about 20 mm and the cover. At the free end of the shaft of the bearing unit drilled a hole the diameter of the cable of the flexible shaft; locking of the cable in the hole is soldered.
The propeller of vetrohod — four, with narrow blades, its diameter is 168 mm. screw is Made of sheet duralumin of a thickness of 3 mm; the profile of the blade is convex-concave, with a rounded front and pointed rear. The angle of the blades (pitch) will have to pick up yourself, gradually increasing it during sea trials.
The propeller is mounted on a deadwood by the shaft between the nut and a cook with a threaded hole. The shaft is located in deadwood; in the front portion thereof a drilled hole of the flexible shaft, where the cable is fixed by soldering. 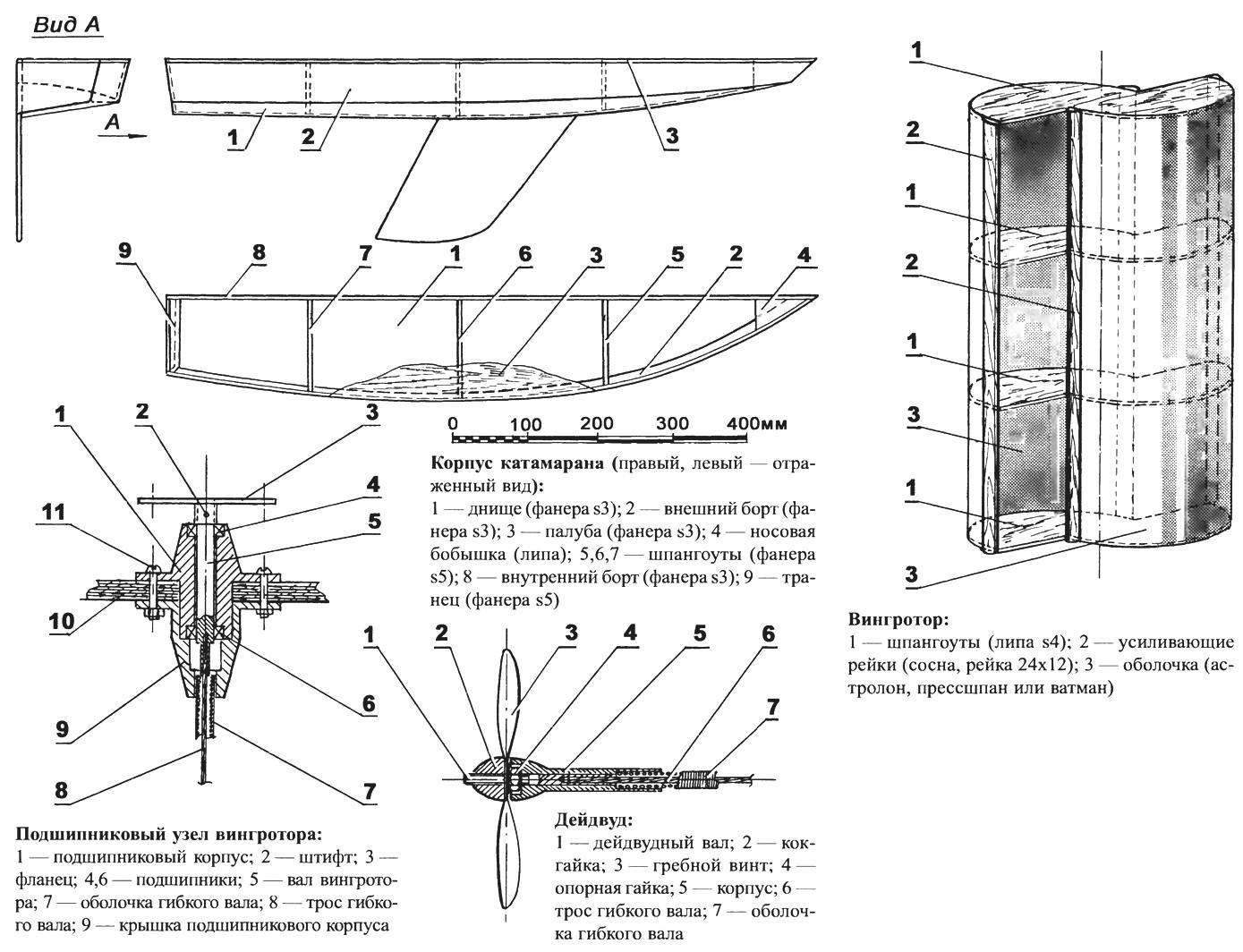 The catamaran hull is plywood. The frames and transom are cut from 5 mm plywood, exterior side, bottom and deck — plywood with a thickness of 3 mm. Inner side and integral keels cut from 5mm plywood. To assemble the housing is most convenient in the simplest slipway — smooth wooden bar with slots in which you can use small wedges to secure the frames. After installation of frames to the frame padded cardboard templates of the sides, bottom and deck — after determining their exact configuration on them cut plywood pieces that with epoxy glue fixed on the frames.
The bridge that unites body and is the basis of the bearing unit of WindRotor, wikiepedia with the use of epoxy resin of several layers of plywood with a total thickness of about 10 mm and a pair of wooden bars. With buildings the bridge connected using four bolts with thread M5; in housing that are glued birch slats with nuts embedded in them.
In the rear part of a catamaran is another bridge from pine slats with a cross-section 50×15 mm — it is fixed a duralumin bracket of deadwood.
Start vetrohod best in windy weather, when the rotor spins easily under the action of air stream. Fastest vetrohod moving in galfvind — when the wind direction is perpendicular to the course of the boat. However vetrohod can talk to the wind — when the wind blows from the side front angle of 30 — 45 degrees to the direction of movement.
I. TEREKHOV