Another interesting application of the foam found young athletes – “fighters” from Omsk Kühtai. For several years, they are on the original foam models with motors are not only successfully fulfill aerobatic tricks, but also spend real dogfights. Suppose there is no such class in the rules of international competition, albeit not as fast and maneuverable lightest “trains” like real sports boytsovkn. But the “pros” they have more than enough. This is an opportunity to train in the gym and outdoors all year round, regardless of the winter cold, and extraordinary ease of use and “start” motors, and simplicity, and consequently, high maintainability models, and minimum flow abundant materials.
The construction of this model begins with the wing clippings melkosharikovogo (packaging) foam. If there is not enough for the desired size of the sheet material can be glued wing of the individual parts. Inlaid embodiment shown in the drawing, the dotted lines indicate places glue joint edges, and the center-endings. Whole wing is definitely easier by cutting both consoles wide openings, they are accompanied by light ribs. In the outer end of the wing is sealed with lead weight 5 g, pre-wrapped thread. According to the model axis is sealed tubular motor, Ø 22 mm, 50 mm long, with a retinue of three layers of paper. Before you need to paste a small wrapped with a piece of wood in place of fastening the rocking axis.
Model sheathed Mylar film, or at least use a long fiber mica paper prilakirovannuyu several times covered after stitched liquid glue BF-2. On the edge of the wing is hung on the finished cloth (better to use nylon fabric) hinges prefabricated and finished the elevator. This element may be formed from cardboard, plywood or a thin lime planed plank. Covering – paper on the BF-2 plus varnish.
Rocking cut from an electrically insulating plastic, to hog the elevator can go thick plate or sheet aluminum. Link connecting rocking with wild boar – a wooden rail with thread strapped with adhesive wire Termination. At the inner end of the wing is glued a small guide plate, through holes which pass cords. Cord terminations From shaking depart flexible stranded wires of the engine power. 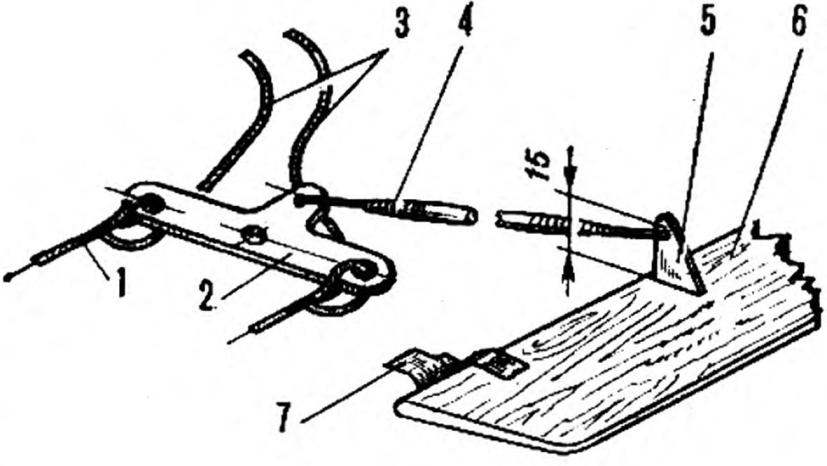 Fig. 3. The control system model:
1 – current-carrying cord, 2 – rocking, 3 – wire motor power 4 – draft of 5 – hog, 6 – elevator, 7 – the loop.
On boytsovkah of this type have proven themselves mikromotorchiki PDM designed for voltage of 12 V. It was under such an engine and created the model described. Its outer diameter of 20 mm, weight – 60 g lot of work on the selection of propellers has been carried out. Created guys stand that allows you to determine the thrust motoustanovki, helped find the optimal parameters of the propeller. His templates and shown in the drawings. Link in place with RC – 100 gf, with belt flight speed of 20-25 km / h. Small load bearing surface (without motor mass model 30-40 g) led to a high for the given conditions model maneuverability, under her power almost all the pieces of Cordoba piloting complex. Fight conducted with cords 5 m of thin insulated stranded wire with standard tapes, shortened to 1 m. For flights used the power supply is suspended on a strap on the shoulder or belt athlete. Within a block of 30 batteries 1.5 V (type “Mars”) g series. The operating handle is provided with a push-button power switch.
Those who will be the first model to manage cord, or not be able to get an easy powerful electric motor, be sure to make a wing of a plane-convex profile. This boytsovka best kept in the air at a low speed, in all other cases, advantageous to apply symmetric profiles. They model and flies faster, and “reverse” aerobatics are then much better.
P. Pogarsky, head model aircraft circle, Omsk