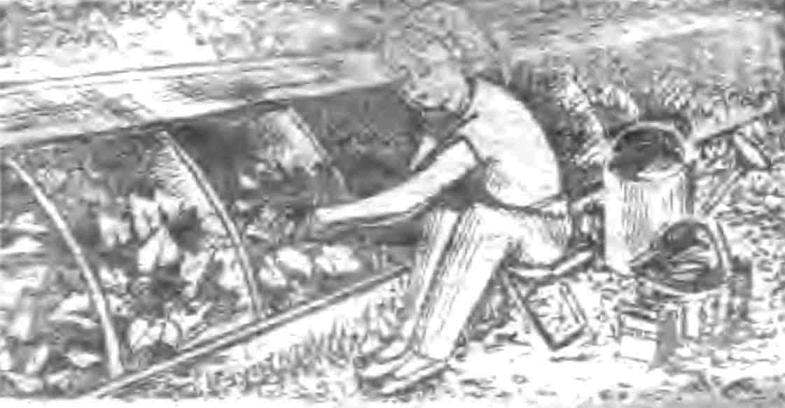 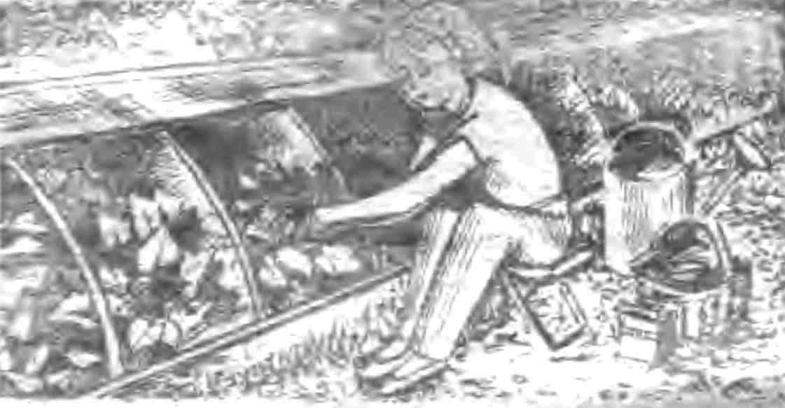 The third year of the Soviet people are working on implementing the Food program of the USSR adopted the may (1982) CPSU Central Committee Plenum. And not only adults. A contribution to the national Treasury Affairs on improving the supply of population with food making pioneers.
They grow new high-yielding culture in the school experimental plots, to produce various agricultural tools, building motorized means of mechanization. And the city guys were not inferior to the rural areas. The circle members autocostruzione of the Palace of pioneers and pupils named after Krupskaya Bauman district of Moscow made, for example, a greenhouse that is simple and available for any repetition in the technical circle. On how to construct the greenhouse, we asked to speak to the head of the circle of autocostruzione Konstantin Ivanovich KRUGLIKOVA.

The design of the greenhouse, in General, traditional is a box with a vaulted roof made of plastic film. The material of the sides of the box — tree, or, as we do, the slate, it is more durable. Between the sheets of slate connected by aluminum corners and kadmirovannye with M5 bolts.

To the side walls in increments of one meter screwed bearing, which must be mounted arc of the arch. They are made of aluminum gymnastic rings Ø 900 mm. the Last cut and the pattern extended up to Ø 1200 mm.
Half of each newly acquired circles are used for arcs, and cut and impramine the ends for supports. They are connected by steel rods, pressed into the support.
End of the arc is attached with screws in the center and even to the posts, which, in turn, bolted to the sides of the box. These stands play an important role in the design of the greenhouse, the fact is that, in addition to Doug, they are half frames and rails-clamps.
Half frames are on both sides of the greenhouse and is intended for ventilation. Raise them as cover suitcases, and fixed in the selected position by the rails, or being moved to one side, which allows you to completely open the greenhouse.
Half frames are made from a downed small nails wooden strips and glazing beads, which are sandwiched between plastic film vault. To the end uprights attached strap hinge: hinges and screws M5. 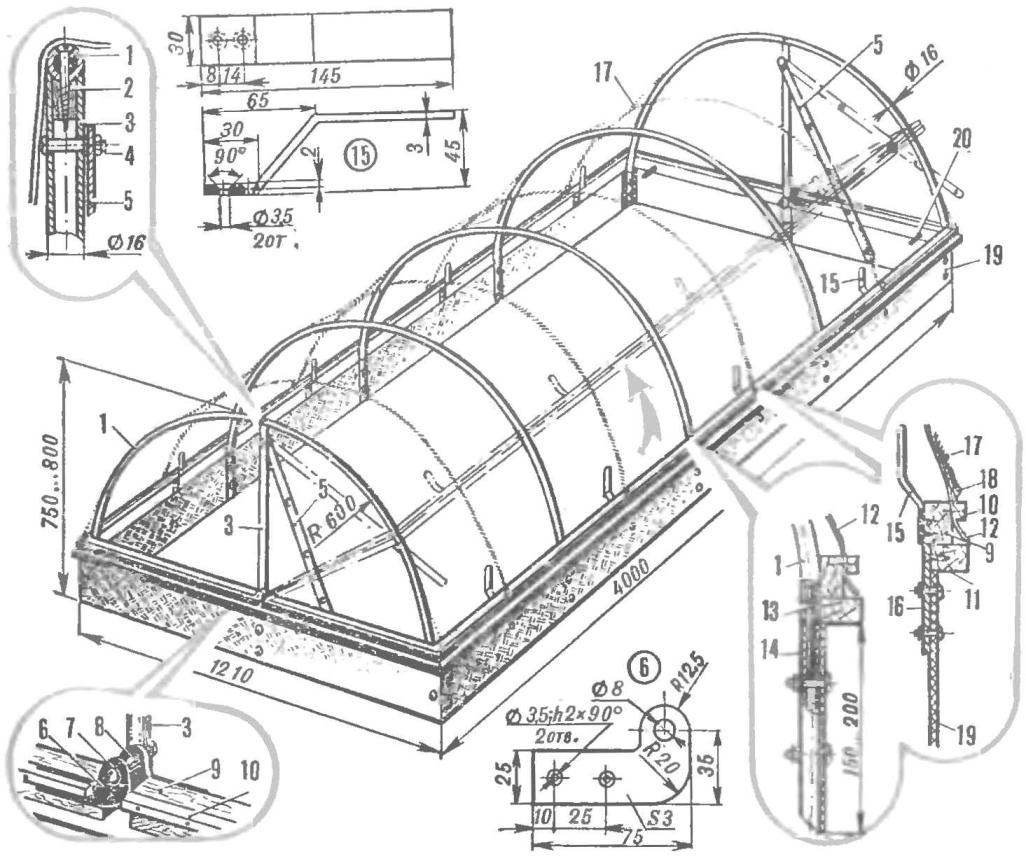 The design of the greenhouse:
1 — arc, 2 — wooden plug, 3 — strut, 4 — bolt M5, 5 — a rejka-lock, 6 — loop articulated, 7 — bolt-hinge, 8 — hub, 9 — strip articulated (50X25 mm), 10 — bead (16X13 mm), 11 — plank edging (50 X 25 mm), 12 — polyethylene film (one layer), 13 — pin, 14 — pole arc 15 — the collection 16 — mount plate edging, 17 — elastic cord, 18 — ring 19 — Board greenhouse, 20 — pin-retainer.
The side beadings embedded ring of wire and to them, parallel to the arcs of the arch, attached to an elastic cord. They support the plastic film taut when the greenhouse is completely closed. This prevents slamming of the film under a sharp wind, and, as a consequence, the destruction of it.
When the greenhouse opened, the film is going special grips attached to the side panels with inner side half-frames — collections.
In the closed position, articulated firmly against the edging, also knocked out of wooden planks and attached to the sides of the metal plates and bolts.
The greenhouse is set up on the bed and slightly dug into the soil. To avoid premature deterioration of structural elements from previously painted with oil paint. At the end of the gardening season, the greenhouse is dismantled and placed in a storeroom until the following spring.