The lightest balsa frame, powerful nitro engine made with your own skilled hands and is able to “pull” almost weightless Model in almost all its evolutions… Are models of air combat’s most experienced athletes. And the fights between them were so exciting a spectacle that everyone who saw one might wish to engage in this direction of modeling.
Want to build bouzouki — so most often I would first come to model aircraft clubs. But when it comes to making a model, before the young designer, there is a serious problem: what to do! No balsa, and aspen although much stronger, but five times heavier. Bouzouki with a frame made of Linden, executed in the form balsa, it flies much worse — big unit load on the wing. If, moreover, it is not “Kalinka”, and mass-compression engine, in a real fight a model release is just hopeless.
All does not mean, however, that the air battle should not deal with. It is only necessary to develop a model without this so rare in our time balsa. It is possible, in principle, to reject the “foreign” n the home-made motors — quite enough of those diesel engines that produces our industry.
In our model airplane circled this bouzouki was created and tested. Her scheme, however, does not carry absolute novelty and familiar to modelers: trapezoidal flying wing, scored profiles of variable relative thickness 11% at building and 10 per cent on the ends of the console. In the manufacture of this model we decided to abandon the balsa, replace it with foam stamps PHV. Characteristically, the density of this material coincides with the corresponding characteristics of high-quality balsa. This gave the ability to cut the model elements with the same cross sections as in the prototype class.
All the flat parts of the model have a thickness of 4-5 mm, and therefore are made of two strips of the foam section 5Х60 mm and a length of 600 mm. Rib for greater rigidity is not facilitated only in the inner frame of the console slotted holes for the control wires. Each of the ribs delineated by lime strips during the gluing they can be fixed to the foam with pins. The Central rib is more powerful than the others — its thickness is 15 mm. As the other ribs, she glued fake strips with a thickness of 2 mm. 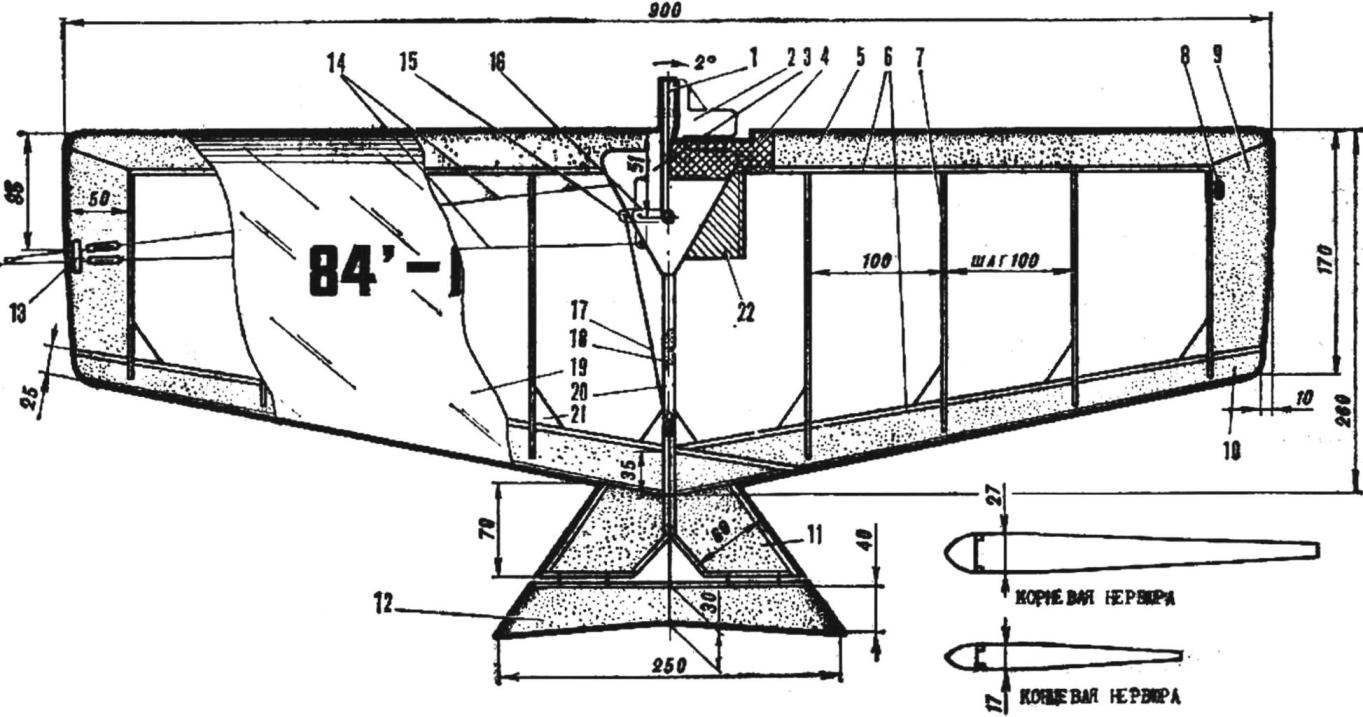 Cord model air combat engine CSTOM-2,5:
1 — motor mount (plywood I beech lining), 2 micromotor CSTOM-2,5, 3 — skin of forehead (plywood with a thickness of 1 mm), 4 — glass cloth reinforcement, 5 — the leading edge of the wing (foam grade PVC), 6 — bezel (pine rack 4X4 mm), 7 — rib (foam PVC), 8 — weight (lead weight 20-30 g)( 9 — ending (foam PVC), 10 — trailing edge (foam PVC), 11 — fin 12 — Elevator (foam PVC), 13 — plywood trim, 14 — control cable, 15 — rocking, 16 — rocking the holder, 17 — pull upravlennya Elevator, 18 — the Central rib (foam PVC), 19 — Mylar trim, 20 — reinforcing pad, 21 — reinforcement gusset, 22— fuel tank.
Back edge with one side enclosed with a pine rail section 4X4 mm. the same slats contrived tail fin and the front part of the Elevator.
The leading edge is foam rail cross-section 25X25 mm and length 900 mm. with a File and sandpaper, it is processed so that in the middle its thickness was 25 mm, and at the ends of 17 mm.
The most important connection of the individual parts of the wing to achieve its symmetry and the absence of the slightest twist. The front edge of the wing from the side of the ribs is enhanced by two pine slats cross-section of 4X4 mm, such as Reiki additionally pasted between the three Central ribs. The top and bottom of the wing in epoxy resin are fixed triangular plywood lining. The thickness is 1-1. 5 mm. do Not forget before the final fixing of the plates to install in the cavity of the wing soldered tin fuel tank and bring them through drainage and filling tube. After sticking the pads are processed according to the profile of the wing leading edge, and their hind part IV length 15 mm zashlifovyvayutsya. Then put on the glue anantavijaya Central rib lime strips, which have previously wiped out 15 mm their front parts to the transition from gusset plate to the strip-the strip was more smooth.
Rocking the control of conventional type. Two equal her shoulder, and 25 mm, the traction lever — control 20 mm. Fixing to the Central rib — sent through it by the bolt. Homemade nut, is a plate 2х10х20 mm. tighten the bolt to have as long as this plate will not go into the foam to a depth of 1.5—2 mm.
In the ending of the external wing, cuts into the lead a weight of 20 g. control Cables, each of which Suite of three cord Ø 0.3 mm, attached to the chair through the intermediate holders of lavalaye OVS Ø 1 mm. In the inner wingtip the place of the output cord are enhanced tubes Ø 2-3 mm. control rod Elevator of curved steel spokes, Ø 1.8 mm and Its exit from the cavity of the wing out through the Central rib: for this it at a 45° angle propisyvaetsya channel, appropriately bent and passed through his rod.
Motor mount is made of plywood of 8 mm thickness and two beech bars section 7×7 mm, glued on its entire length from the engine. Reverse side sewn plywood with a thickness of 1 mm. to ensure the optimum alignment model motor mount embedded in the front edge so that the motor goes into it approximately 10 mm. Respectively in the front edge is cut a place under the engine, the latter fixed so that between the foam and Carter there is a gap of 1-2 mm. Below the groove does not weaken the front edge, her amplify in this place the fiberglass with a thickness of 0.2 mm on the epoxy binder.
After final tuning and processing of the frame is fitted by a Mylar film. It is possible to use adhesives such as BF-2, BF-4, BF-6, 88Н or “Unique”. Drying is accelerated by Ironing iron. Obtachivaya first {top or bottom — all the same) side, remember to tuck the Dacron protivopolojnoe on the side of the wing. Repeat and trim the other side. Note that the banded lime ribs is resistant to high temperature, what can be said about the front edge of the foam. This means that the regulator of the iron should be set at a temperature not exceeding 130°. If there are no large folds, the generated heat is enough to pull the film covering. If Dacron is opaque, they can be paste and stabilizer bouzouki. At the same time to lubricate it is necessary only its contours.
The Elevator is attached to the model in four “loops” of wire grade optical fiber Ø 1 mm (in the extreme case of the ordinary paper clip) and the four “ears”, shaped like the head of a pin with a ring. Pylon rudder — from knitting needles 2,5 mm. Ø the Shoulder of his lever — 20 mm height To the wheel it is attached with two “whiskers” — the beginning and the end of the spokes, which arched itself hog.

The design of the motor and power system. 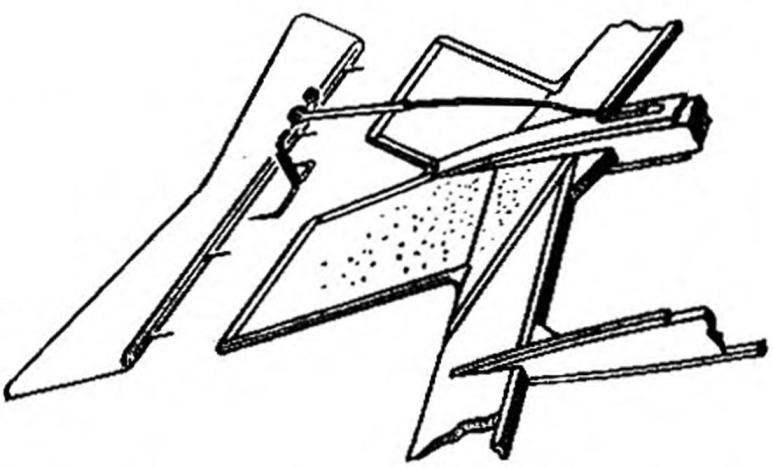 The design of the tail.
The engine is made up of several already worked motors type CSTIM is 2.5. The crankshaft was subjected to leave as staff had increased fragility. For this red-hot copper block was heated zone of the inlet window until the metal is blue of a tint, and then the shaft was cooled in air. At the beginning of the bearing neck cut three grooves with a width and a depth of 1 mm and increments of 1 mm, labyrinth seal, substantially reducing the release of oil from the engine.
Another refinement of the engine, which significantly improved its thermal mode has allowed to increase the engine speed and thus increase power. Its purpose is to reduce the thermal resistance in a pair of sleeve — shirt of the cylinder. Lubricated with viscous lubricating oil surface of the sleeve, wrapped it with a layer of aluminum foil, then with a quick movement, introduced into heated to 140-150° ribbed part of the crankcase.
To run a modified engine and fly around the model best with the air screw Ø 280X130 mm, reduced to Ø 220 mm. In the future, you can go for screw Ø mm. 180X Х180 With this propeller on a standard cords model speeds up to 135 km/h, is easy to perform maneuvers, evenly pull cords in all points of the hemisphere and does not reset the speed under virtually any evolutions of the battle.
In the operation of our constructed model was the balsa. Elastic due to the foam frame models withstand, without breaking, a rough landing, and even falling to the ground.
P. KIBET, Antonov an-pervorazryadnik