Among the best athletes rocketmodeler Russia over the last three years was included the master of sports Igor Ponomarev. Two years in a row he was the winner or prize-winner of many competitions in the category of boys. There was even a medalist of the world championship of 2002 And going into the adult category, Igor said about himself — became the champion of Russia in the class of models of raketoplana (Ѕ4В) and the second prizewinner in the class of rotochutes (S9B).
Its development models will always contain the original technical solutions. This applies to models with tape (S6A) (see “modelist-Konstruktor” No. 8’2003). The novelty of the design resides in raketoplana and rotochutes. Today, we offer the drawings and the description of his rocket class S4B, in our opinion, will interest many readers.
Rocket glider I. Ponomarev performed by widespread today, the so-called “Moscow” scheme with the folding consoles (“ears”) and rotary wing. But it should be noted three innovations that have only. It — rotate wing for the start of clockwise (all other athletes — vs), the location of the rescue system of MRD in the cavity (niche) of the pylon and the original focus of the console when it returns to the planning position. But all this a bit later, and now about the structure itself.
The fuselage tapered beam made of CFRP. Its production process is as follows. The mandrel, oiled separating layer of mastic, is wound two layers of carbon fabric with a thickness of 0.13—0.15 mm and one fiberglass, pre-impregnated with polyester resin. In order to avoid air voids between the layers when winding, “raw” billet wrap tape tape and placed in a drying Cabinet. After drying of the resin workpiece treated first with a file (remove the roughness), and then, holding the mandrel in a lathe, vyskazyvat sandpaper and cut into the size length of 415 mm.
In front (fore) end of the beam glued the fairing of lime and give it a Pre-arched form inside at a distance of 130 mm from the wide edge insert and fix the dural sleeve of the attachment point of the wing. The tail part of the beam is closed by a plug. The attachment of the wing consists of four parts: bushings, bolts, nuts and washers. The first three positions made of aluminum with high purity processing, and washer — made of silicone.
At the distance of 114 mm from the nose to the fuselage is fastened on top of the pylon for mounting the wing. The pylon is made of balsa plate with a width of 6 mm, length — 58 mm and of variable thickness: in front — 5 mm rear — 2.5 mm. the Difference in thickness provides the necessary installation angle of the wing. Before gluing in the bottom plane of the pylon, make a groove down the profile of the fuselage (the radius is about 8 mm). In the forward fuselage glued two hooks: one in its fairing, for mounting the return mechanism of the wing for flight; the second before the pylon to the thread of fixing the wing at takeoff. The return mechanism consists of two joined lengths of gum and fishing line. It is also one of the original technical solutions proposed by the designer. It allows the fishing line to avoid breaking traction when moving on the bends when turning the wing.
Pilon container MRD — stacked, glued the balsa of three elements: medium — U-shaped frame with a thickness of 3 mm and the two side “cheeks” of a thickness of 1.5 mm. Fibers of the wood when gluing, are perpendicular to each other. Ready at the end of the pylon creates a cavity (niche) size 25x10x3 mm, which serves as a container for rescue system MRD — brake belt.
The front of the pole slightly round off, attach the hook of the steel wire to the thread of fixing the wing during takeoff and glued it to the forward fuselage. From the bottom to the pylon attach the container MRD, formed of three layers of glass on the mandrel with a diameter of 10.3 mm. the Front part of the container has affixed the fairing of lime, which makes a small hole for the bone fixation wing at the start of the model. 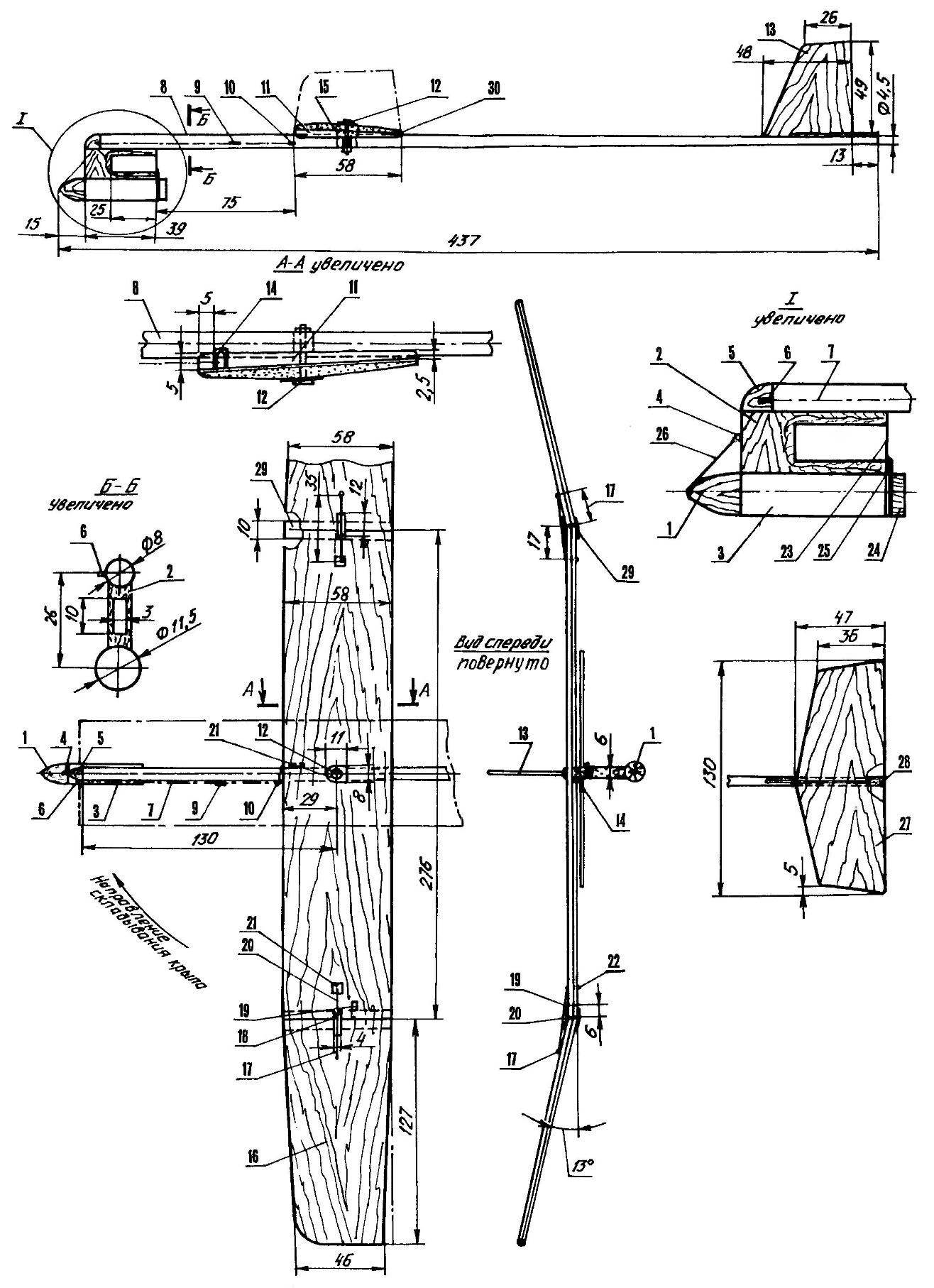 Model rocket (class S4B) champion 2003 I. Ponomarev:
1 — fairing container MRD (Linden); 2 — pylon MRD (balsa); 3 — container MRD (fiberglass); 4 — hook thread wing mounting; 5 — cone of the fuselage (basswood); 6 — hook of the elastic return of the wing; 7 — elastic return of the wing for planning; 8 — fuselage (CFRP); 9 — sealing compounds of gum and fishing line return mechanism; 10 — hook; 11 — pylon wing (balsa); 12 — bolt and rotate the wing; 13 — keel (balsa veneer, s1); 14 — stopper of the wing when planning; 15 — wing (balsa); 16 console (“ear”) of the wing (balsa); 17 — hook (2 pieces); 18 — emphasis console when you return (celluloid); 19— hook the threads of the fixation wing at take-off; 20 — elastic return of the console (2 PCs); 21 — reinforcing plates (celluloid s0,3); 22 (locking mechanism) rubber bands return (2); 23 — cavity system rescue MRD; 24 — MRD; 25 — thread mounting of the rescue system MRD; 26 — thread fixation of the wing during takeoff; 27 — stabilizer (balsa veneer s1); 28 —cap (lime); 29 — joint (nylon strip width 10.2 units); 30 — pad (glass fiber width 6, s0,3)
Wing — balsa plate thickness of 3 mm, has dual angle “V”: consists of a center section and two consoles. Profile PLANO-convex. The center section — rectangular size mm 276×58, console (“ears”) — trapezoidal shape. Their length 127 mm, width from 58 to 46 mm, thickness at the outer ends — 2 mm, front edge slightly rounded. Swivel “ears” center section is carried out using nylon strips with a width of 10 mm. pasted below.
The angle of the “V” (about 13°) is achieved by treating the end surfaces of consoles and center section. In “ears” for a distance of 17 mm from the root edge (pine junction with the center), attach hooks for rubber bands return. And along the longitudinal axis of the bonded end plate of celluloid with a width of 4 mm and a length of 12 mm, which is slightly (4 mm) extends over the edge of the console. This projection allows to avoid “dead” areas work gum when you return “abalone” for planning. Incidentally, this is also one of the “chips” in the design.
In the middle of the center section bottom is glued a thin piece of fiberglass with a width of 6 mm and a thickness of 0.3 mm and made a hole of 2 mm diameter, reinforced top plate of celluloid. The plate serves to reduce friction during the rotation of the center section and the desired position of the wing in the planning ensures that the retainer (limiter) of steel wire with diameter 0.5 mm is fixed on the lower plane at a distance of 5 mm from the leading edge. To the stopper in the same cable segment of the line of thrust of the return wing. To the left of the center section at a distance of 6 mm from edge glued the hook to the bone fixation wing during takeoff.
Empennage: the fin and stabilizer are made from balsa veneer with a thickness of 1 mm. edges are slightly rounded on the edges. After cutting out the shape in terms of their surface treated, varnish and glue to the fuselage tail boom in epoxy resin.
The weight of the model is about 15 g. To start it has to load.
Preparing the model to run. First put the wing on the fuselage, pre-rubbed soprikasalis the surface of the pylon and of the wing with graphite (lead pencil). Then insert the bolt and tighten the nut. Then put all the gum (return consoles and rotation of the wing) and adjust the model for planning. Achieving a stable gliding flight, go to the launch of the rocket airframe to the engine.
To do this, fold the “ears” down and turn the wing through 90° clockwise (by the way, is it just models I. Ponomarev), and in this position is fixed with a thread passing through a hook on the left side of the center section, the hook on the pole and the hole in the container mrad. Thread mounting the brake band is pre-tied to the engine and put it in a container. The brake band is placed to “accordion” and inserted into the cavity (niche) of the pylon. Start of the rocket from the launcher of the type “Piston”.
In flight, after the operation kicked-tion charge, burn through locking thread. The released elastic return mechanism deploys the wing in position to plan and almost simultaneously deflected up and console. The model flies like a normal glider. And this is the occasion of the shooting of MRD with the brake band. It remains only to fix the result.