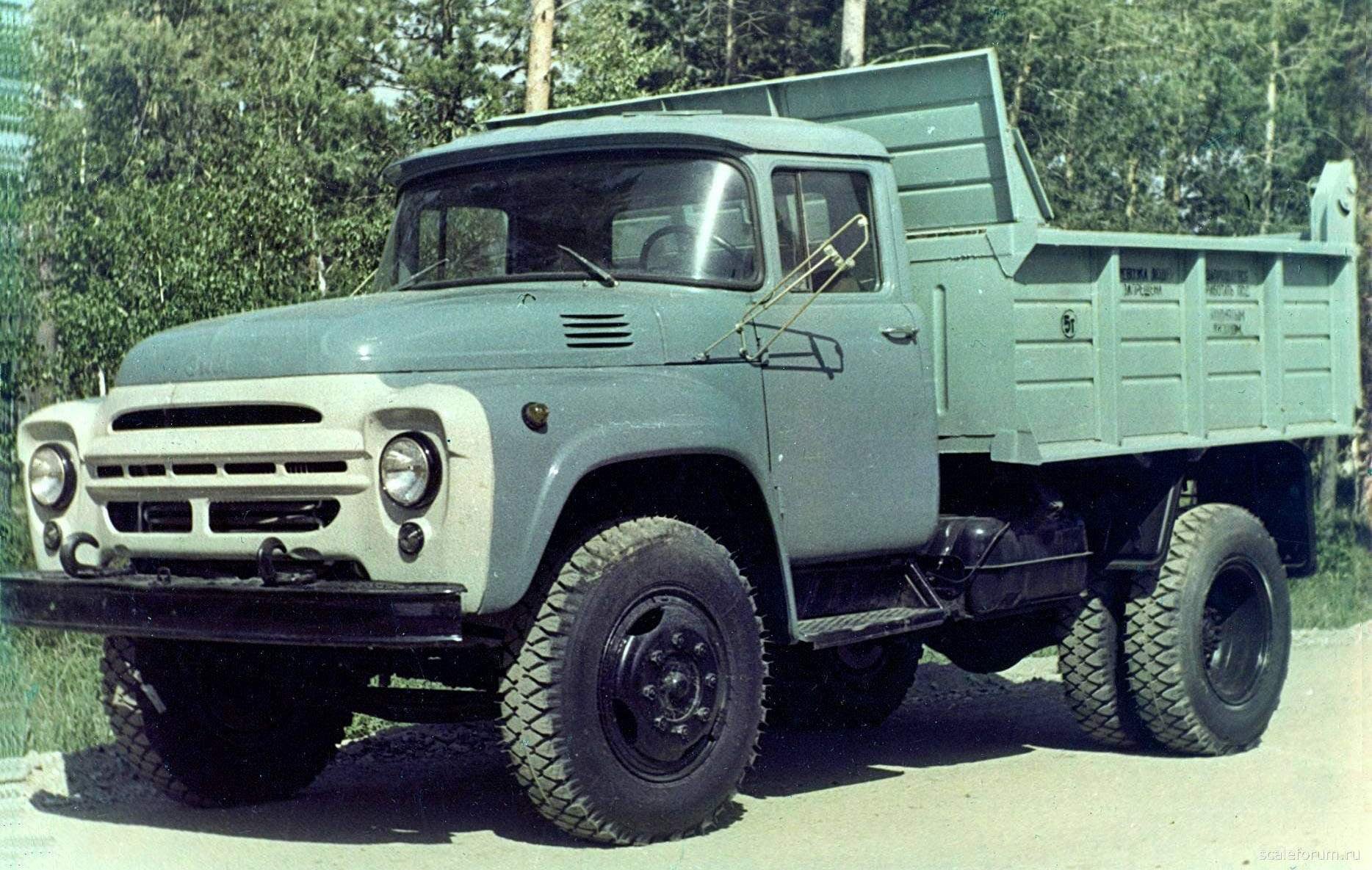 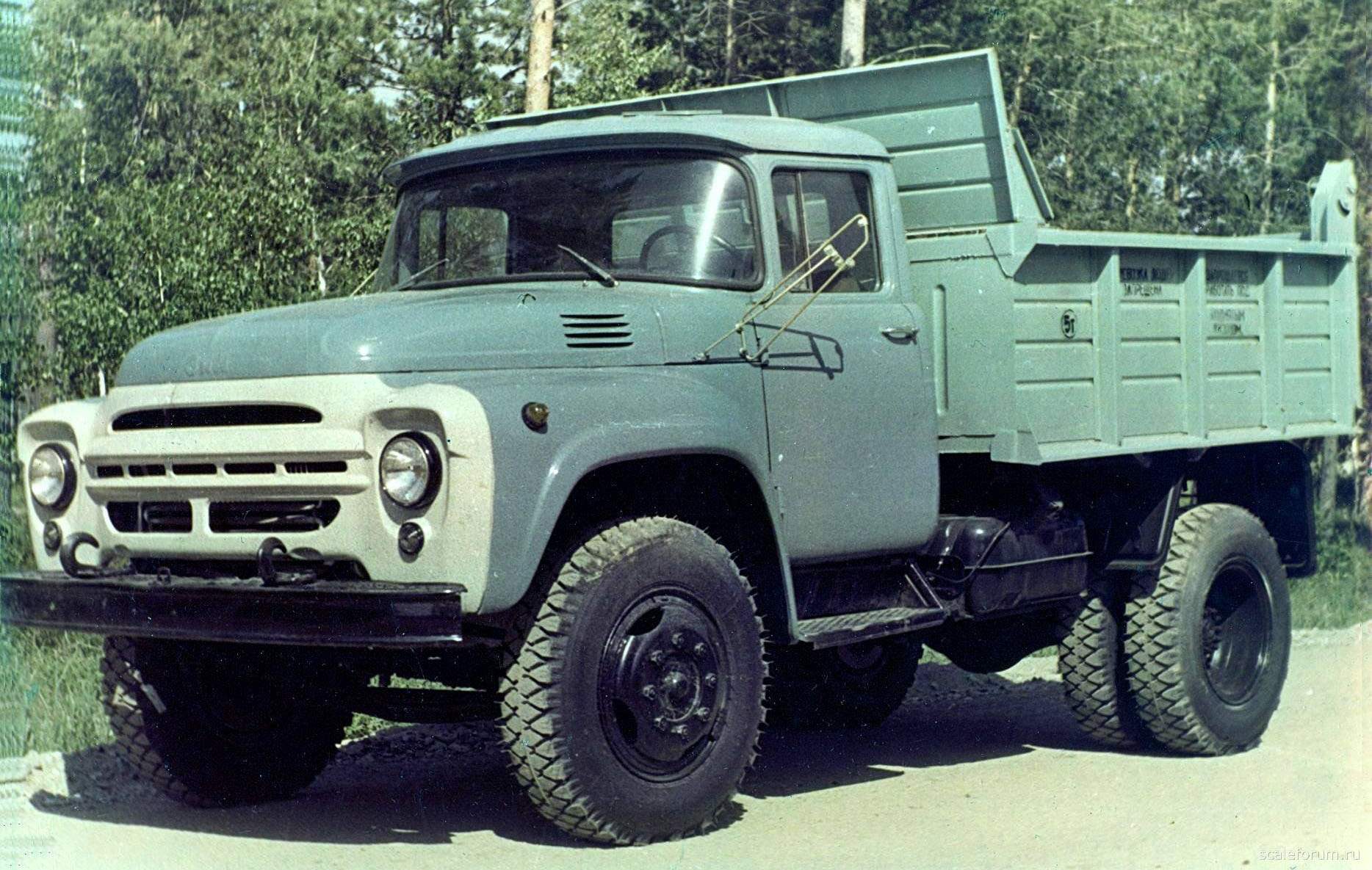 THE CAR ROOF. For transportation of bulk cargo: flour for bakeries, cement on construction sites, fertilizers on the field — in recent years increasingly used cars with special pnevmotsitami. They are very comfortable, as they provide minimal losses during loading, unloading and transportation.
But this car has a significant drawback: the narrow “specialization”. But, say, in agriculture requires a versatile vehicle, what are the usual side cars.
They can carry everything. However, bulk cargo transported in the body, even if the slits of his “sealed”, much sprayed under the action of the oncoming air flow.
Young innovators, participants NTTM of the Institute of mechanization of agriculture has developed a sealing cover for the body of the car ZIL-MMZ-555. It is a removable box without a bottom, mounted on the body and its special closing, folding like the bellows of an accordion, cover. It is formed by small transverse plates held together by elastic bands that play the role of hinges. Thanks to them, and the levers connecting the movable plate with the cable, all the shelter by the manual actuator is shifted to the cockpit and folds up in a vertical package, opening the body. 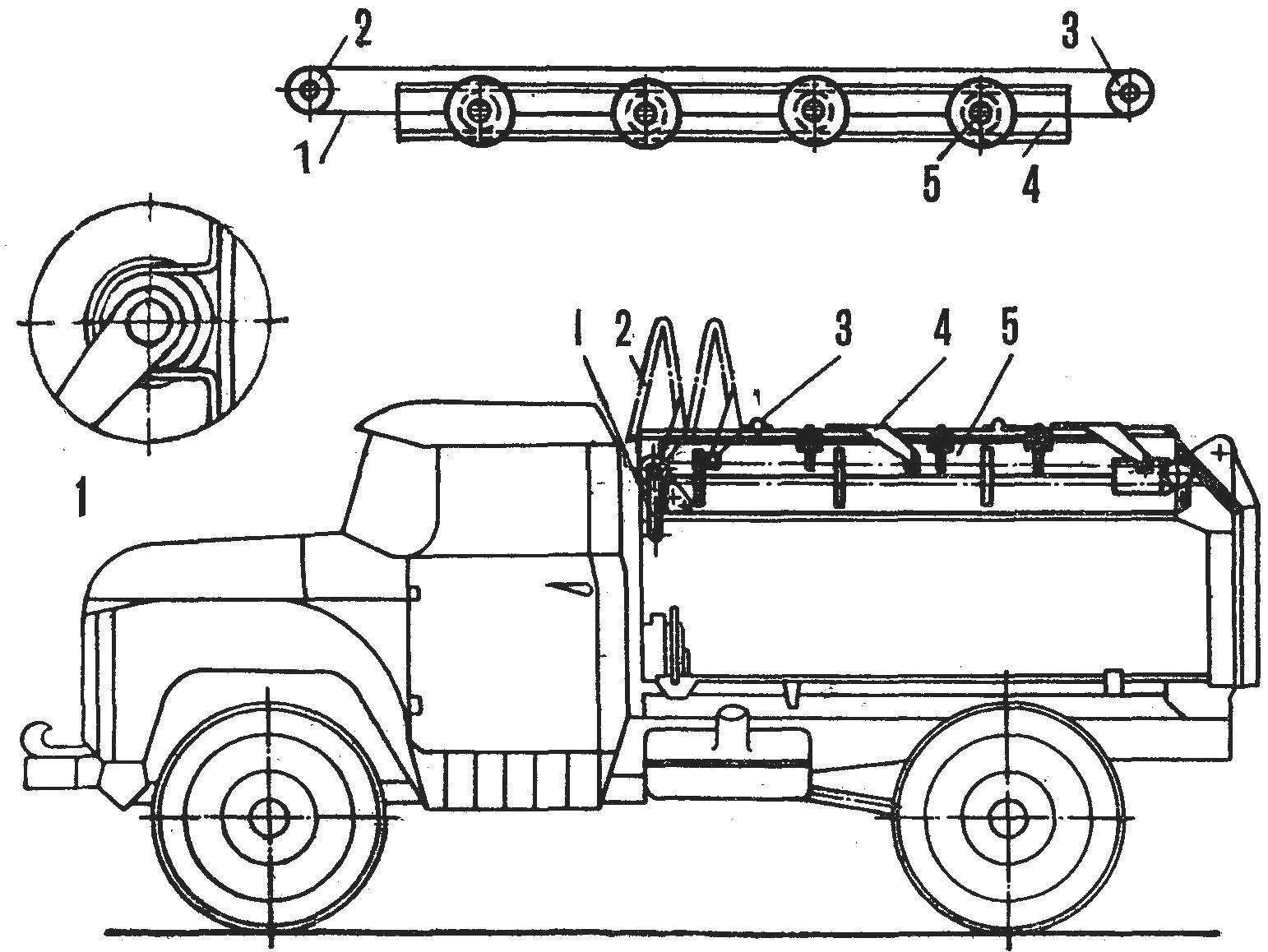 Fig. 1. The scheme is mechanized “solid” shelter of the car body:
1 — manual drive 2 — folding plate cover, 3 — elastic coupling plates 4 — lift arm plate, 5 — wire.
The top — variant of the mechanized soft cover
1 — tether, 2 — a drum for winding the cable 3 video cable 4 — guides (treadmill), 5 — rollers and washers of the cross bars of the canopy.
This device not only saves and protects the goods but also significantly increases the volume of the body. Compared to existing new shelter has less weight.
Accumatively on the basis of the Mari Republican Association “agriculture” created a similar device, but the top cap it is made in the form of a soft canopy made of canvas or rubberized fabric. To move along the extended side walls of the body stretched rope, and at the two sides strengthened “cross-country” tracks from the corners 15X35 mm; it’s moving the rollers of the cross bars attached to the canopy.
The whole system is driven by a handle rotating shaft with a drum for coiling the cable. Of the four cross bars, moving the rollers along the guide rails, only the last one, closest to the back Board, connected to the cable. They dragged the plank then assemble the canopy to the cockpit, stretch it to the rear Board on which the shelter is attached to the hooks.
To comply with the parallel movement of the slats and prevent them from the guide between the strip and the roller put a restrictive washer.
… REPLACEMENT THREAD. Modern technology knows the two most common ways of connection parts: welding and carving. And if the first wins in strength and losing due to non-releasable, the second, on the contrary, if necessary to separate parts, but often wears out quickly or is broken by the excessive load.
An original way to repair threads developed by the innovators of the State all-Union scientific research technological Institute of repair and operation mashinno-tractor Park N. Korolev, V. Belan and S. Burstein. They offered the damaged thread, replace… replacement.
To do this, the innovators have created and self-locking helical threaded inserts, and tool kit to install them in the holes. 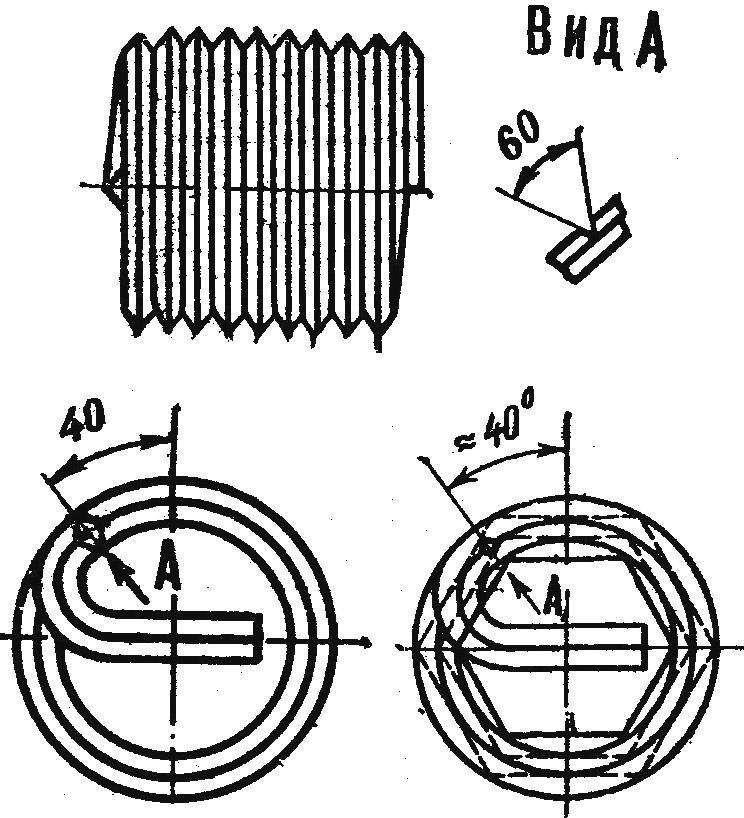 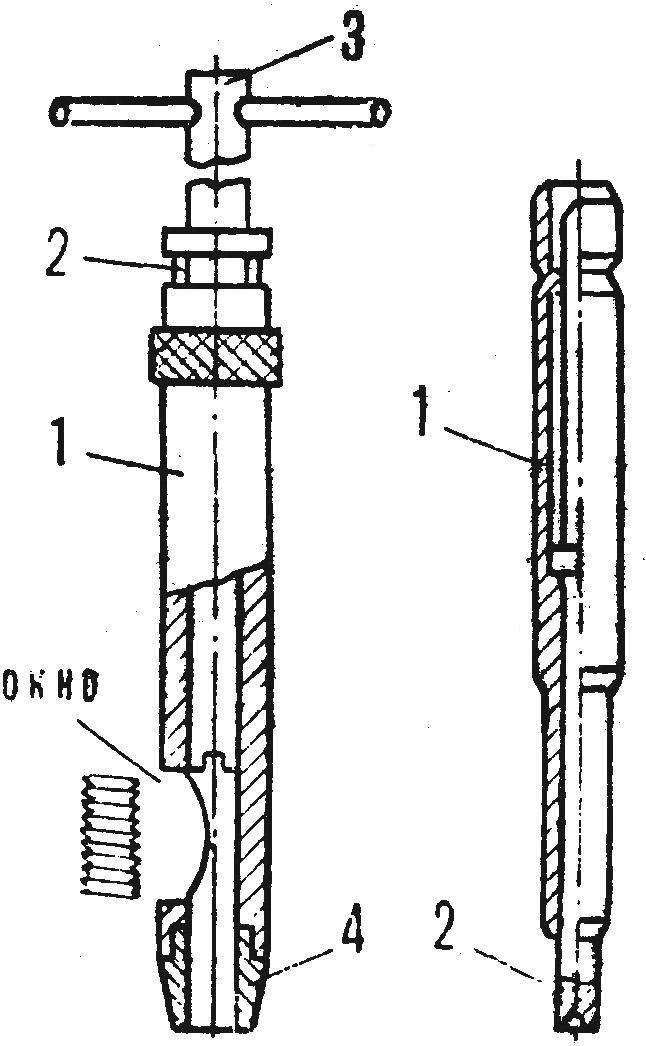 Fig. 3. Tool for threaded inserts.
Left — key for screwing the insert:
1 — body, 2 — lock, 3 — knob, 4 — tip; right — piercer: 1 — housing, 2 — pin.
So what are these “spare parts”? They look like a tightly twisted coil spring, but the wire is not round, but diamond shaped cross section. While the outer sharp edge it serves as a thread for screwing the insert into the hole being repaired, and the interior replaces the stripped threads. Self-locking insert is characterized by having a hexagonal coil that prevents it from unscrewing.
To restore the defective thread the hole first rassverlivajut to the next size of the core or the corresponding fine thread. Then tap cut the required thread, for example M8 — M10X1,25; for M10 — M12X1,5 and so on; and to a depth slightly greater than the length of the insert: M6 — 0.5 mm; for M8 — 0.6; M10 — 0.8; M12 — 0.9; M14 — M16 — 1 mm.
The thus prepared hole is blown with compressed air to remove the shavings, and with a key are screwed or self-locking helical threaded inserts, which for the purpose of temporary technological lead.
Device key shown in the figure. The threaded insert is embedded and the window down a rope, and driver easy rotation is entered in the box and on to the tip until the bottom part of the key does not seem the first round with a leash. Then set the key on the hole being repaired and without pressure screw to insert until the top coil will not be below part surface by 0.5 — 1.0 mm.
After this key is removed from the hole, instead it inserts a piercer and a sharp blow to the top of the striker is cut down technological leash insertion, facilitated by nadela shown in figure 2 (view a).
Repairing worn threaded holes with the help of such inserts has a number of advantages: allows to recover the nominal, that is, the former, the size of the thread; in parts made of soft aluminum alloy in 50 times increases the wear resistance of threaded connections in cast iron parts — 10 times.
The new technology reduces by half the cost and twice increases productivity, which gives a significant economic effect.
The sets of devices with a set of inserts already available Maloyaroslavets pilot plant GOSNITI.
REPAIR AND… AUTOMATION. Puncture cameras pneumosan possible on all roads, especially in rural areas. And due to the fact that the car Park in agriculture is constantly increasing, the operation to restore the “leaky” cells require new technological solutions.
In Ladushkina branch “agriculture” the Kaliningrad region has developed and implemented three rationalization proposals aimed at reducing time and improving the repair quality car cameras.
One of them is an automatic device on and off to break up the apparatus at the specified time mode. 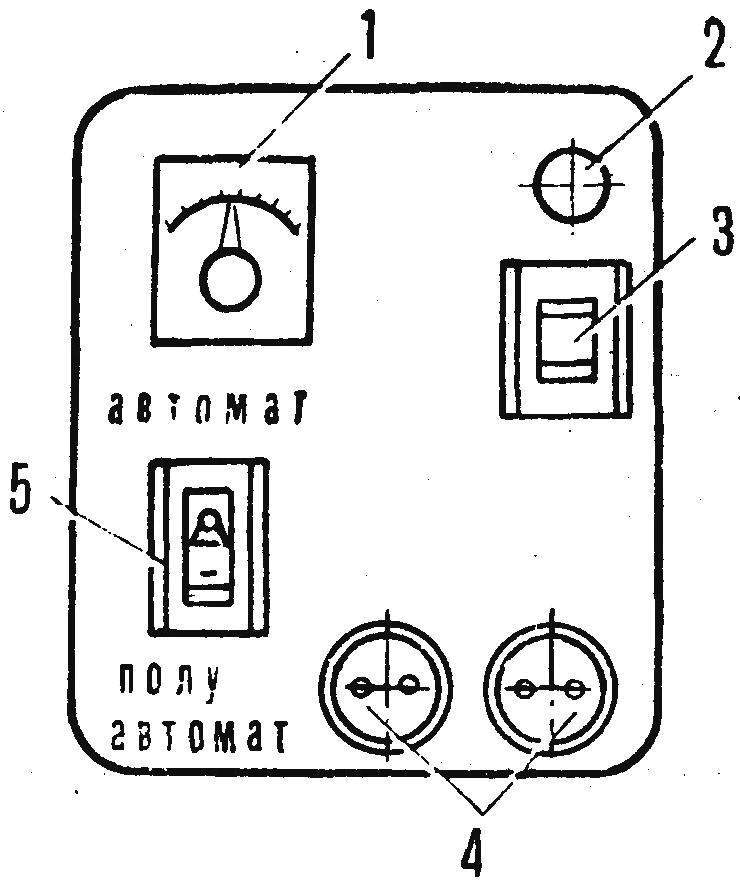 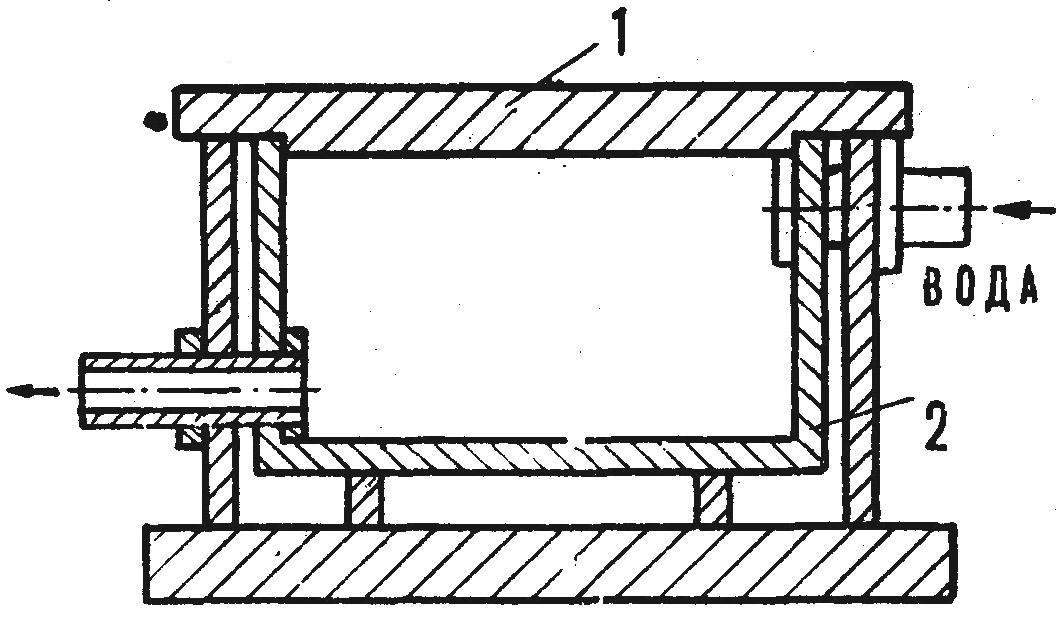 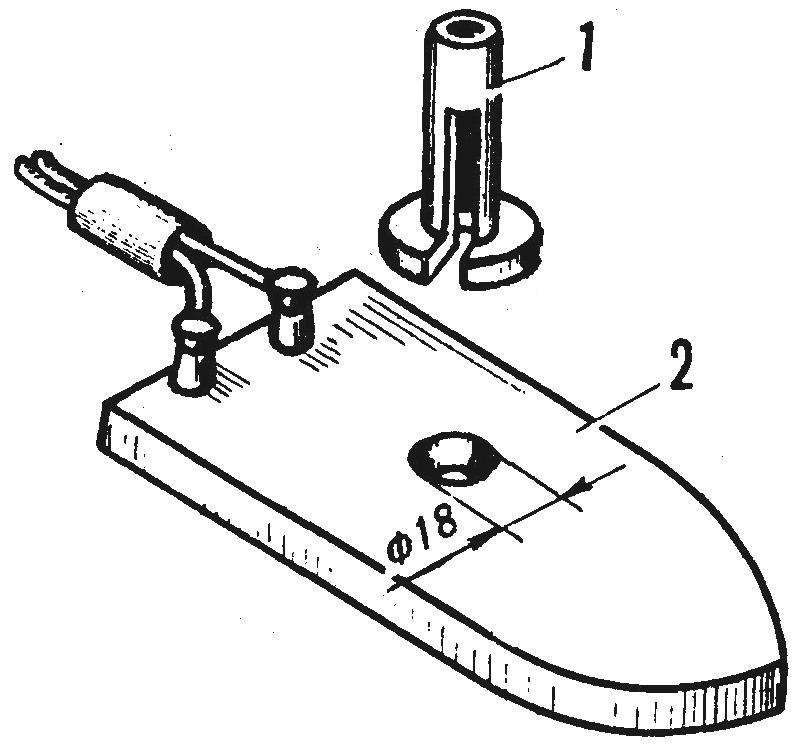 Fig. 6. Vulcanizer… of iron:
1 — clamping sleeve, 2 — heating element from the iron.
The device is a remote control electromechanically, running time switch, switch for automatic and semi-automatic mode and magnetic starter. The relay has the limits of regulation of heating time electropolymerisation of the device from 0 to 15 min., with intervals of 1 min. As such a relay can be used the same mechanism from household washing machines.
Remote control is included in the single-phase magnetic starter. In the automatic mode handle relay set at a predetermined heating time, which depends on the thickness of the repaired camera. When you connect electromechanically to the outlet lights up the test lamp.
Semi-automatic mode is selected in cases when it is necessary to apply a patch on the thicker part of the camera, for example in the repair of the place of installation of the valve. The device frees the worker from having to observe the regime of curing.
In order for the patch is well bonded, the camera along with a plate of electromechanically to cool for 15-20 min. to ambient temperature, after which only the camera can capture. This, in essence, non-productive equipment downtime. 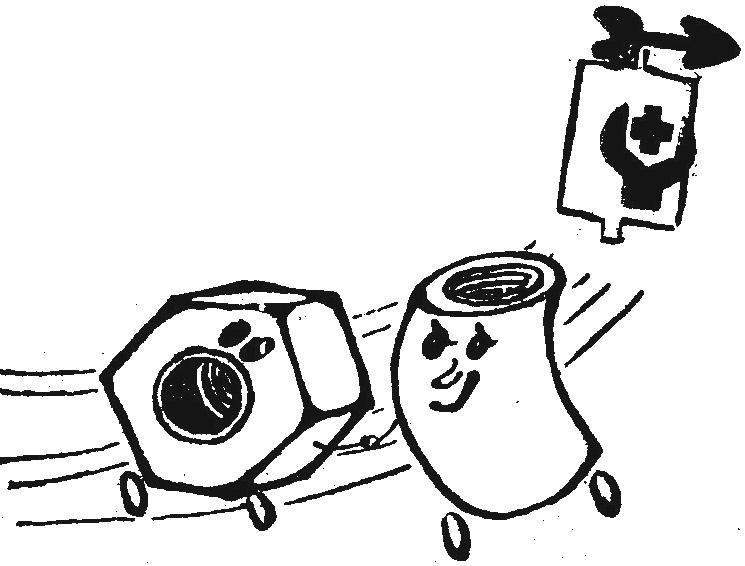 To eliminate the time lost in this operation, it was decided to alter electrofocussing. A heating element mounted on top, and under his stove mounted water tank with a capacity of 2 L. the Plate with the heating element, thus, became the cover of the tank.
Now after the process of vulcanization through the tank passes water and cooling plate with the repaired camera takes only 5 min. labor Productivity has increased in 3-4 times.
Is it possible to speed up and warming up elektromechanische? — thinking innovators. He is gaining a working temperature of not less than 20 min.
Tried to use the heating element… from a household iron. Warm-up time it is only one minute and the power is sufficient — 1,0—1,2 kW. In the plate heating element drilled a hole Ø18 mm at the valve chamber. For a clip of “iron” to the camera, which is conducted by vulcanizing screw table made of special bushing. It drilled a hole straight into the valve and profiterole side slot under the bent valve autokamera.
Implementation of the described proposals was much increased productivity, dramatically reduced maintenance time. If before vulcanization of patches required up to 40 minutes without preparatory operations, but now it takes only 6-8 min.
MINI-TARA. There is an almost insurmountable paradox transportation of certain goods: whatever perfect and wonderful as containers for their transportation, it becomes a burden as soon as the cargo delivered to the place. To take packaging back — it means to take “air”: unproductive use of transport, extra costs.
That’s why professionals in many sectors of the economy has caused great interest in unusual containers created in the course of the show NTTM Institute VNIIMS. 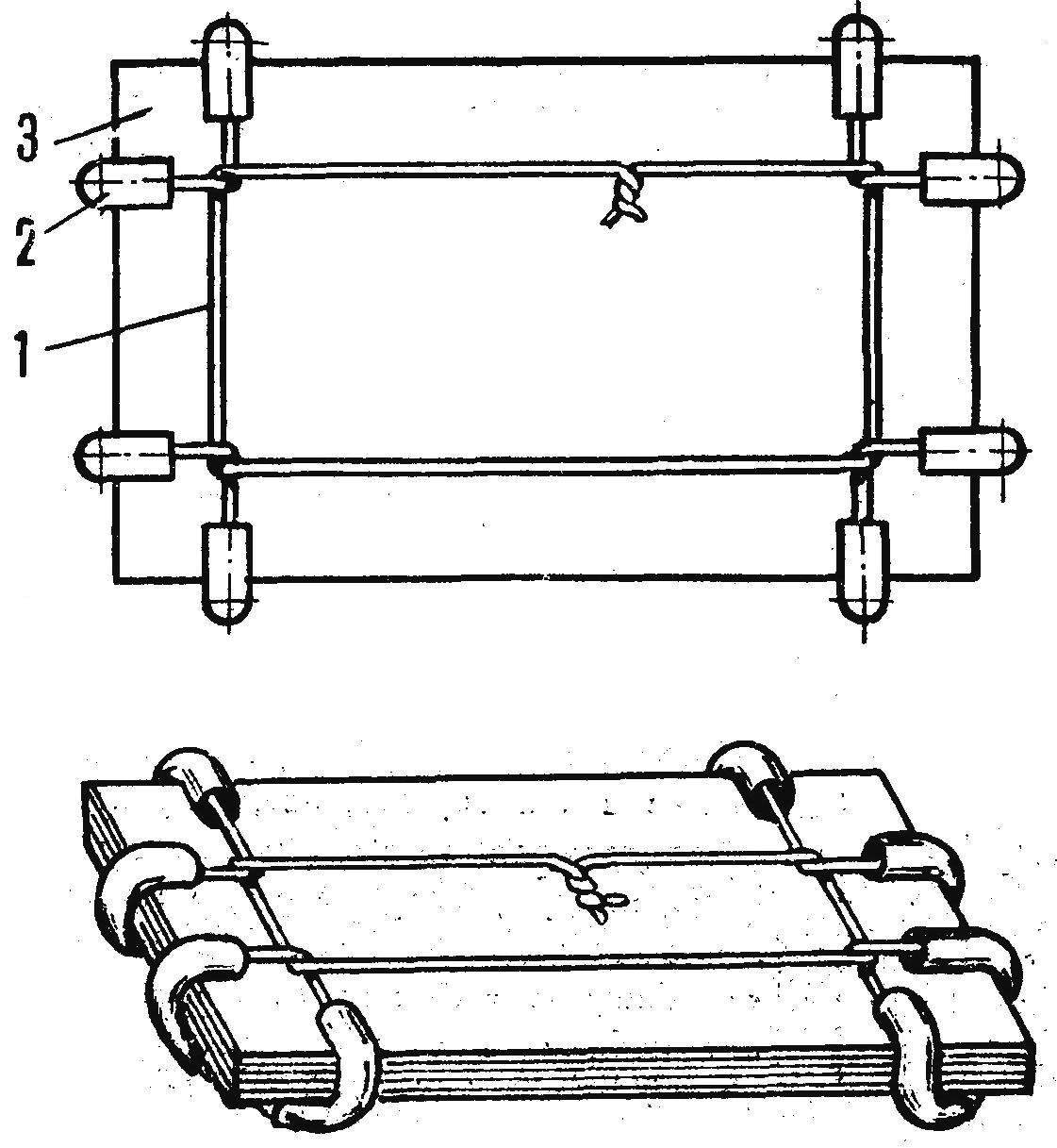 Fig. 7. Ring container:
1 — coupling, 2 — ring-3 — pack of sheet goods.
It consists… of four flexible rings. Enough to throw them on the corners of any package from the product sheet, and then pull a loop coupler as shown in the figure, and the cargo is Packed, ready for transportation and storage in warehouses.
In contact with the load ring clips have a soft elastic shell, for example, cropping of rubber hose.
When capacity is one ton container-“invisible” weighs only 10 lbs. to Make it possible for every workshop.
A. KISELEV