Model of champion of the USSR in 1986 in the class S4B V. Lunichkina is the result of work on improvement of the gliders with a flexible slat. Speaking with such devices, the Kazakh sportsman became the winner of many competitions.
A feature of the model is the use of aerodynamic configuration of the slat different from the conventional parameters, which can significantly improve performance. 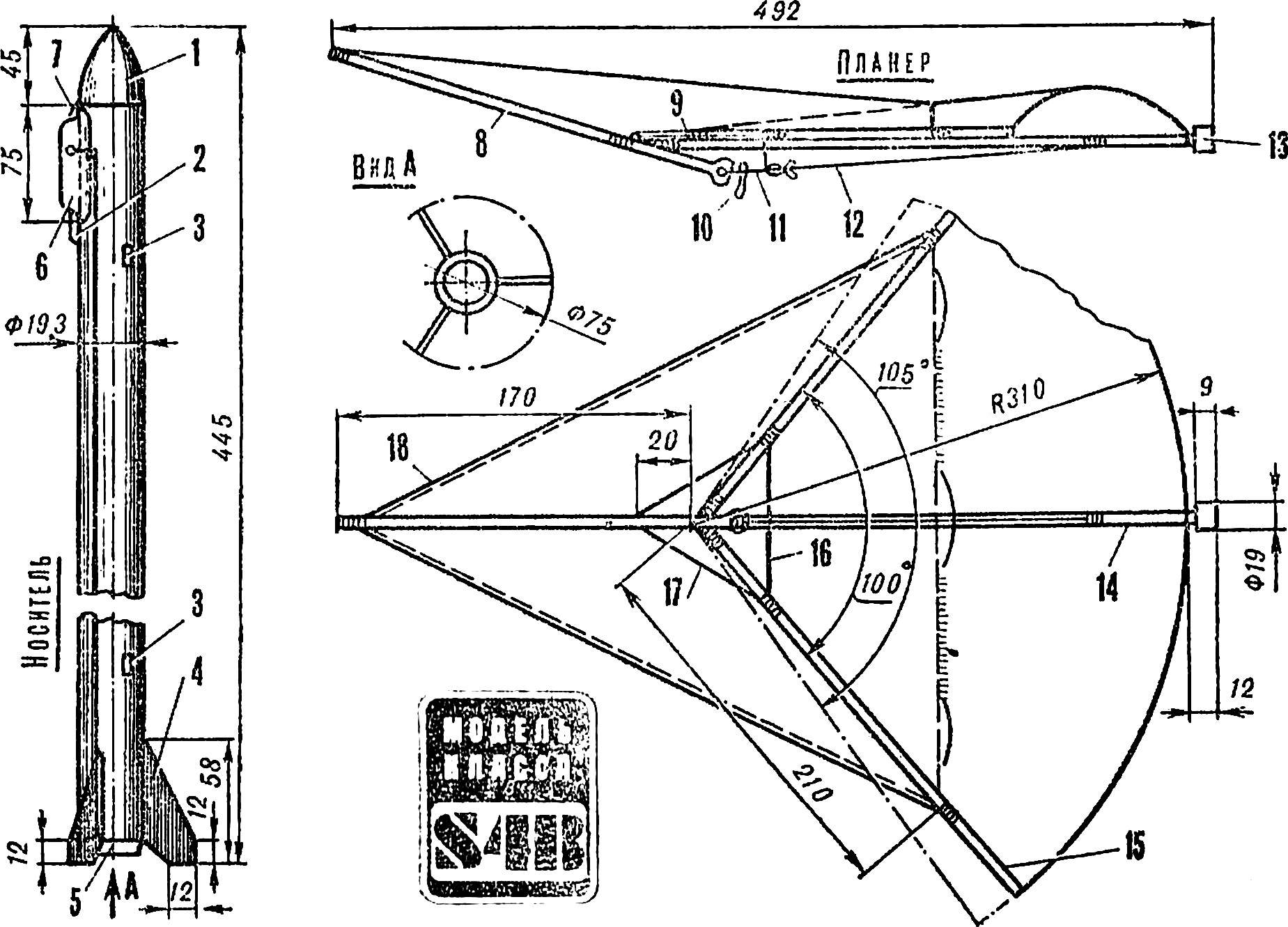 Model rocket champion of the USSR, 1986, V. Lunichkina:
1 — fairing, 2 — blister, 3 — guide ring, 4 — stabilizer, 5 adapter, 6 — container, 7 — lever-constipation, 8 — slat Central beam, 9 — joints of the side members of the wing 10 — the fuse 11 — thread-controller, 12 — rubber thread return, 13 — tail wad, 14 Central beam 15 — beam side wing 16 — thread-lock sweep angle, 17 — rubber thread disclosure of the side members of the wing, the 18 — side cables of the slat.
Central beam — a pine rail 3X3 mm. In its front part fixed rubber thread disclosure of the side members of the wing and tail is balsa wad. At a distance of 20 mm from the sock planted two independent hinge. With the yarn and glue the hinged side of the wing beams of variable cross section (maximum of 3X3 mm). Sweep angle of 100°. Side of the slat wires Ø 0.3 mm are supported in front of the Central beam. The angle of installation of additional aerodynamic surface is adjustable by changing the length of the thread-controller, the carrier and the wick device.
Stitched glider used Dacron (film) with a thickness of 10 microns. The mass of the airframe 5,
The media represents a fibreglass tube Ø 19,3 mm. In the upper part of the housing container placed on the side recovery system carrier, consisting of a flap and glued to the body of the fairing. In the starting position the container is pressed against the carrier arm constipation. It is attached to the head fairing. In the bottom of the hull glued the balsa adapter engine. Stabilizers cut from balsa plates with a thickness of 0.5 mm and covered with fiberglass. The mass of the carrier without an engine 26 g.
A. LOBANOV, V. CHAPSAL, Dushanbe