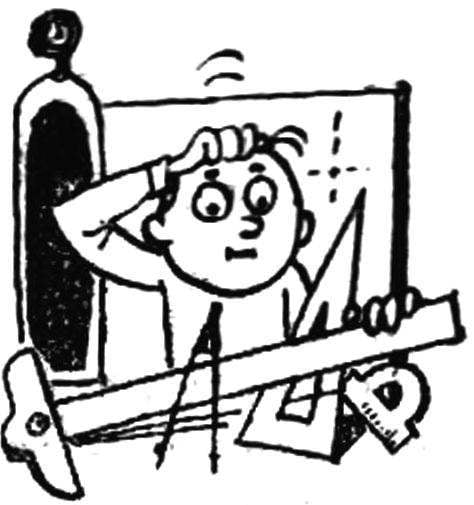 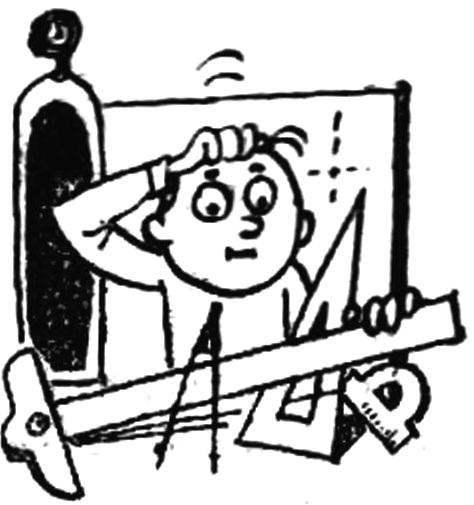 To the editor of our journal continues to receive many letters from Amateur designers: the interest in such type snowmobile technology among different age groups continues unabated. But the character letters often suggests that many builders begin manufacturing snowmobile, not very clearly imagining that they want to build and what the machine can see the future, why you want to work with. Naturally, because of this allow annoying mistakes, and end up with a design without the desired operational and technical characteristics.
We were asked to give recommendations for the construction of a snowmobile, our constant author and consultant, renowned expert on snowmobiles I. N. JUVENALIA.
Years of experience designing a variety of machines shows that for the successful performance of the work must follow a strict sequence in all its phases — from idea to realization in the metal.
Amateurs alone building the snowmobile, as a rule, make a serious Mistake, ignoring one of the first mandatory points in the design process — development of technical tasks to create their design.
Technical specifications (or technical requirements) — the starting document for all further work: calculations, detailed design, and subsequent manufacture. It is recorded that the designer wishes to obtain from the machine, Assembly, part. That is, put a specific design goal that we must achieve in the process. 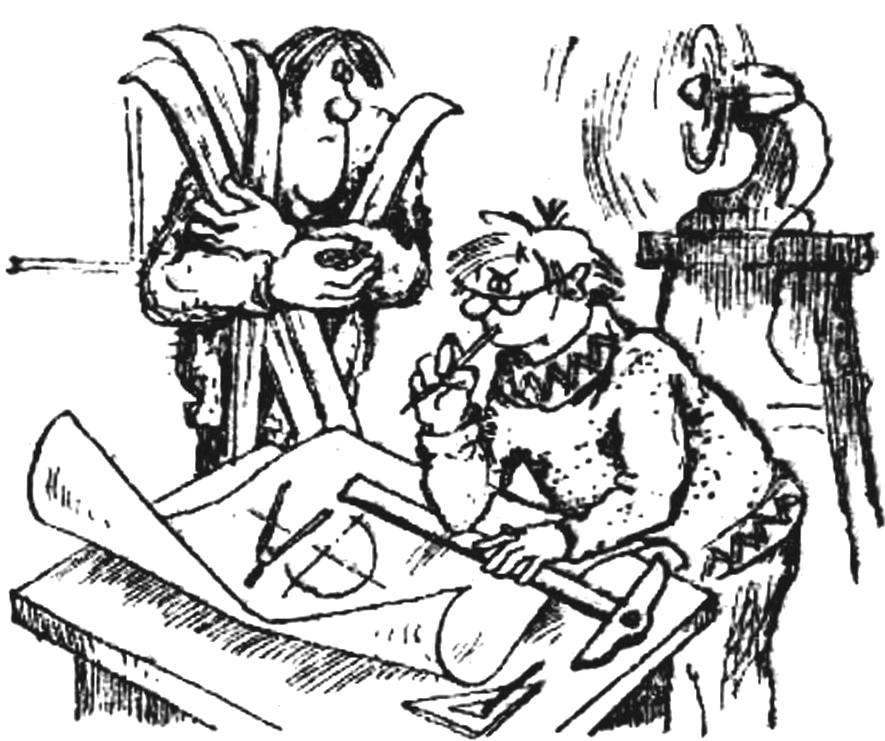 It should be emphasized that to put right the problem, given the real possibility of its subsequent decisions, but without the necessary source data, it is very difficult. However, it can be done if you learn from other’s experience, to get acquainted with previously constructed, tested and well-performing designs.
You will also need a certain baggage of theoretical knowledge, especially in the operation of the machine and its individual units — and without this it is impossible to outline a precise program of action.
Properly drafted technical requirements largely determine not only the scheme of the future car, but its most important elements. Has not yet developed a form and dimensions, not marked with design of individual units, and the task can already have all the basic information required for calculations and design.
Each individual designer in their creative solutions. So fans created a snowmobile — even of the same type, or similar designation, the power of the installed engine, can be as different in technical characteristics, and the decision of the General scheme and individual units. This largely depends on a number of private reasons, which are determined by the availability of materials and finished assemblies, manufacturing capabilities, availability of workshop, machine equipment, necessary tools, and even local conditions. 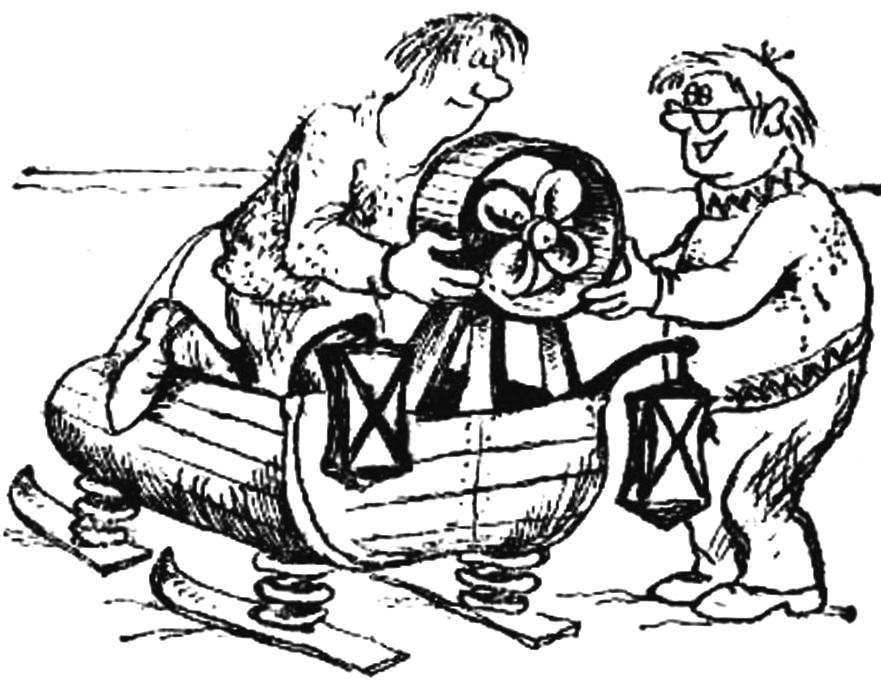 The technical requirements for Amateur-built planes must be written and pre-addressed the following questions.
PERFORMANCE CHARACTERISTICS
From a clear definition, what is a machine dependent range of requirements: for example, the permeability of snowmobiles on winter roads, the General scheme and many other features. If, for example, the sled will be used for hunting, the machine must have a high degree of permeability.
The degree of patency of the snowmobiles, their performance characteristics determined by the dynamic ratio of “quality”, which are according to the formula:
K = T/Gx,
where To — dynamic coefficient, T is the traction force of the propeller in kg, we develop them when working on site, i.e. without translational motion of the snowmobile, Gx — undercarriage weight of the snowmobile in kgs.
The value of the coefficient K for snowmobiles Amateur-built ranges of 0.2—0.3. But we should remember that the larger the value, the more prohodili during the winter off-road work machine. The designer selects the value of the dynamic coefficient, Ko, should seek, that he was at least 0.2. This formula can be used to determine T and Gх.
T = Gх·; and Gx = T/K,
These values for pre-calculation can be determined as follows:
T=0,8 N·Tu,
where N is engine power in HP, 0,8 — factor, reliability and service life of the engine; That is the specific thrust of the propeller in kg, that is, they develop the force in kgs per HP of engine power.
The specific thrust of That depends on the diameter of the air Vita and engine power. It is determined by the load on a propeller sweeping the area, decreasing with increasing the load. When engine power up to 12 HP — 4.5 kg/HP, 20 HP — 4.0 kg/HP, 50 HP and 3.5 kg/HP, 100 HP — 3.0 kg/HP, 260 HP — 2.6 pounds/HP
More accurate traction force is determined by the formula:
T = (33,25·h·D·N)2/3
where 33,25 — coefficient; h — efficiency of the propeller (for self-made, it varies depending on the correctness of calculation and workmanship from 0.65 to 0.82, or from 65 to 82%); D is the screw diameter in meters, and N is the engine power.
The value of Gx can be determined, based on the fact that the chassis the weight must not exceed 12 ÷ 15 kg per horsepower of engine power.
THE CARRYING CAPACITY OF THE SNOWMOBILE
It includes weight of crew, passengers, transported cargo and fuel.
This load is given for a snowmobile with skis on the soles of ordinary carbon steel, the coefficient trepnya where snow is accepted as 100%. When you use steel instead of materials with lower coefficient of friction — brass, low pressure polyethylene, fluoroplastic-4 — this value can be increased. In this case, the G1x is determined from the expression
G1x = Gx·100/f,
where f is the ratio of the coefficient of friction of the source material to the coefficient of friction of carbon steel.
For materials used on the soles of the skis, the coefficients of friction are as follows: carbon steel of 1.0, or 100%, wood (ash) of 0.97, archila 0,935, stainless steel 0,810, duralumin 0,790, 0,735 polyethylene, PTFE 0,730, brass 0,710.
RANGE
The distance that a snowmobile must overcome existing tanks the fuel and oil without refueling on the way.
FUEL
The above mentioned fuel, in turn, determines the required capacity of the fuel tanks (plus 5% emergency reserve).
THE SPEED OF THE SNOWMOBILE
The technical requirements are usually written for two values of the speed of the snowmobile: Vт — technical, that is, the speed of the actual movement on the road, excluding the time spent on Parking in the path. Vмакс as possible, that is the speed that can develop the snowmobile when the engine is running at maximum capacity and at full (rated) load. The maximum speed is determined by measuring the distance when driving on the virgin snow when the outside temperature is between -5 and -20°, in other words, when a good sliding of the ski on the snow. The measuring distance should be straight without obstacles from the snow sastrugi, ridges; its length not less than 0.5 km.
TURNING RADIUS
Measured at the inner track of the skis of the snowmobile at a speed that ensures the safety of its execution, normally 5 km/h.
GRADEABILITY
Specified land lift available to overcome the machine with normal weight load.
ADDITIONAL REQUIREMENTS
In this section technical specifications Builder of snowmobiles writes that, in his opinion or based on the study of previous experience should be reflected in the design of future machines. Here, the restriction introduced dimensions of the machine or, conversely, increasing the length of the body for transportation of any oversized cargo. Some of the requirements can reflect the designer look on the desired configuration of the machine or its separate elements — on the basis of study of experience. For example, “the snowmobile needs to be done on chetyrehstennoy scheme as a more sustainable and having less resistance to movement compared to trehmernoi”, etc.
SAFETY
The propeller is one of the most dangerous (to others) of the construction elements. High speed doing he describes the circle transparent, the human eye does not perceive it “plane”. Therefore, it is necessary:
THE FENCE SCREW
To warn people about the danger it is usually dyed bright red paint.
BRAKING SYSTEM
It is often provided by link-and-pin, or scraping devices.
THE ENGINE STARTING SYSTEM
The most commonly used by the majority of fans start the engine by cranking it over the propeller by hand (ignition on) is strictly forbidden. Starter needed. 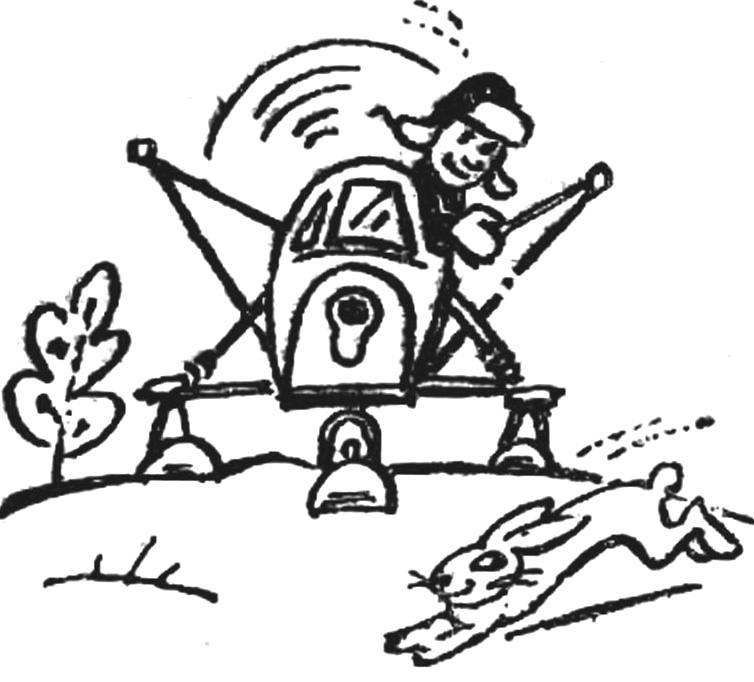 THE OUTER SVETOSHUMOVYE
In winter the day length is very small, and in the Northern latitudes of the polar night sets in, so the sled needs to be installed lights that allow the driver to see the road clearly.
A LAYOUT DRAWING OF THE SNOWMOBILE
After the preparation of the technical requirements, you can proceed to the next etapu work is a preliminary calculation and execution of the layout drawing of the snowmobile. These works are carried out in parallel. In this technical specification is a guideline: it will be specified in the settlement process.
The drawing is the basis for the design of future machines. It determines the placement of all design elements, driver and passengers, outlined the General contours of the body, the location of doors, Windows, hatches, is linking all the major sizes.
Many fans of technical creativity in an effort to expedite the work, omit this important step as making drawings of the car.
This is a wrong practice. Experience shows that the time taken to complete the drawings, working out for their detail and size, handsomely pays for itself through reduced costs of integration and adjustment of parts during construction, not to mention the fact that the more careless constructors lose because of the forced rework of individual parts. 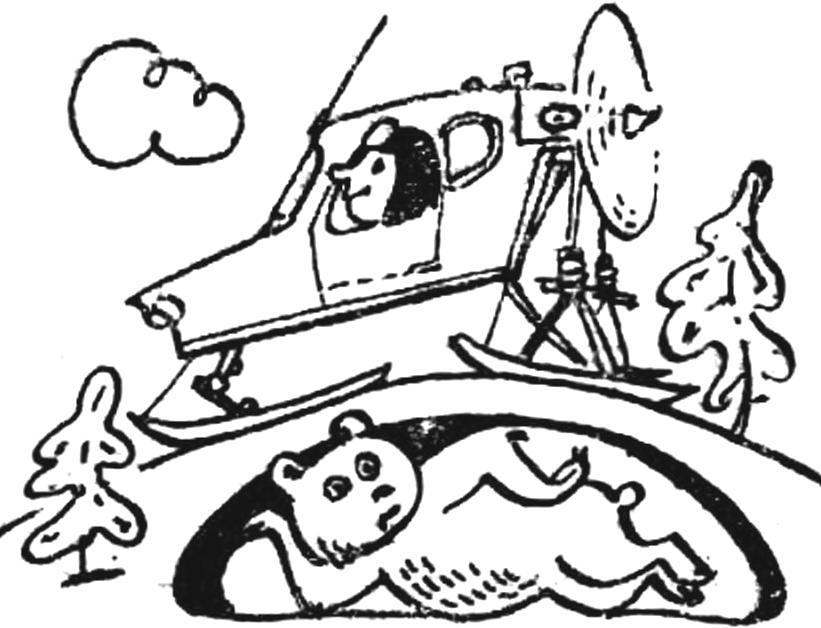 The layout drawing is performed in three projections at the scale of at least 1:5 if necessary, additional cross-sections, sections and callouts of individual units.
In the design process should also pay attention to safety requirements. The main ones are the following.
In the sled of the open type, the distance from the back of the driver to the plane of rotation of the propeller should be not less than 0.8 m.
Placed behind the driver rotating drives — pulleys, chains, belts — must be covered with safety shields.
In the case of the closed type, it is important to provide secure mounting and ease of use doors and hatches. Not least in these requirements is the need for a good view of the road from the driver’s seat: the angle of view through the windshield must provide visibility since 5 m from front of ski socks.
Useful windshield to protect from freezing — for example, installing double glazing, as well as to supply the wipers.
Fuel tanks and batteries necessarily separated from the cabin by a sealed partition.
To heat the cabin should be at the expense of heater: it is impossible for these goals to lay the exhaust pipe to the body.
The propeller on the width of the machine must not protrude beyond the outer edges of the ski; the distance from the end of the blade to the bottom of the housing not less than 50 mm, and the soles of the skis — not less than 250 mm. the Ends of the rear ski should not fall into the plane of rotation of the screw. 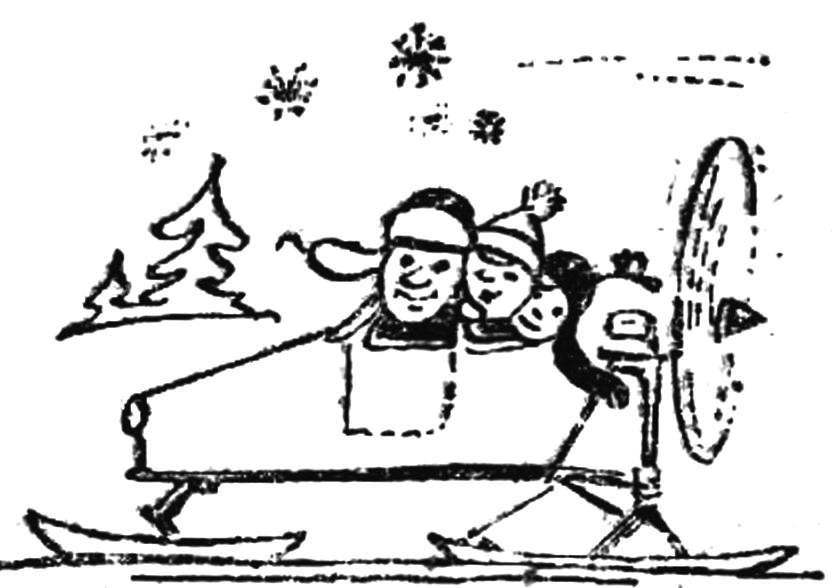 What’s the preferred exterior painting snowmobiles? Any, but not necessarily bright, well visible in the snow from a distance.
An important design requirement — the margin of safety: it should be calculated based on congestion at least 5 Gх.
If you intend operation on the frozen rivers and ponds, it is desirable to provide a machine of buoyancy — in case of break the ice.
When driving in the evening and at night on the fence of the propeller required position lights: on the right hand — green left — red.
For the construction of snowmobile use materials conforming to the requirements of GOST, given their performance in low temperatures down to -50°.