Rapidly running time. In everyday Affairs and concerns we often don’t notice this. Fade and erased in the memory a vivid and memorable dates of the event. But some of them become part of history.
Has its own history and sports. Your date. Such a memorable event Angering the modeling was the first all-Union competition held in 1926, on Khodynka field in Moscow. About them, about how it was about his first steps in aircraft modeling sport support kicks winner of these competitions, now aeronautical engineer TSAGI B. A., KIRSTEIN.
Fascination with aviation was born in our boys ‘ hearts in the early 20-ies. While the Tambov is often swept planes standing close by the air unit. And head guys, like sunflowers following the sun, turned low after flying in the sky wonderful machines.
The desire to quickly join this unusual for the times, technology, touch her own hands has led to attempts to build a flying model. But what we knew then? What is able? Did someone in that much. But what captured the delight when the model is run and typing speed gently suddenly detached from the ground and flew!..
We did not recognize the existence of the society of friends of air fleet (ODVF), and not just to us got rooms published at that time excellent magazine “Airplane”. This journal started at the end of 1923 and for several years was a source of life and knowledge for all interested in aviation.
Tambov branch of ODF was quite active and repeatedly conducting aeromodelling competition that attracted many participants and even more spectators. In those years, aviation was the center of attention, and everyone associated with the event caused a keen interest.
Gradually accumulated experience and knowledge, our model skill improved. A big step forward we were able to do when modelers of the country began to supply the necessary materials. Among them special value, as I recall, had a rubber for resinators.
Through the magazine “Aircraft” we got data on the modeling of the Caucasus. Their model flew on a huge, unattainable distance for us. The success of zakavkazia contributed to the abundance of ascending currents common to the area. But we s knew of this and was amazed at their achievements. However, soon one of us — G. Margaritana model also took this upward stream of air, and we realized what the secret of success of the Transcaucasian modelers.
In the “Plane” at the time it was reported on the extraordinary success of American Modeler of Arrosa. Were described it rezinomotornaya models of type “duck” with the fuselage of the two rails. They converged ahead into a single point, forming A-shaped frame, bearing two rear pusher propeller. This design gave rise to numerous imitations. 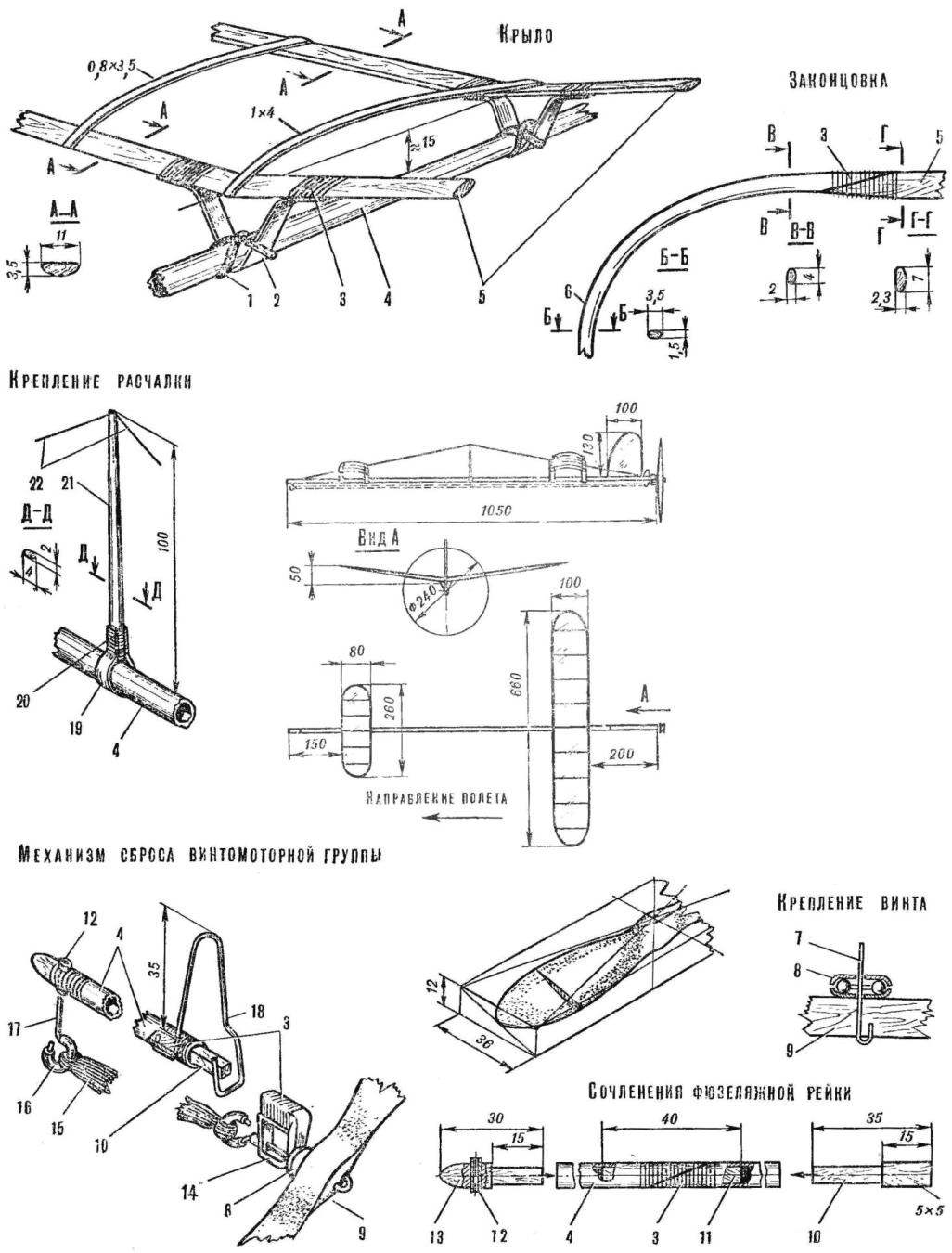 1 — rubber coupling, 2 — pylon (aluminum), 3 — threads with glue, 4 — fuselage rack (cane Ø 9 mm, at the ends Ø 7 mm), 5 — spars (pine); 6 — ending (bamboo), 7 — hook (steel wire Ø 1.2 mm) 8 — thrust bearing (plate), 9 — screw (birch, Ø 240 mm, and approximately equal to the diameter), 10 — caudal boss (birch), 11 — fake bugey, 12 — copper tube, 13 — bow boss (birch) 14 — bearing housing (aluminum sheet), 15 — rubber motor (14 threads 1X1 mm), 16 rubber tube 17 — hook (steel wire Ø 1.2 mm), 18 — reset spring (steel wire Ø 1 mm), 19 — clamp (aluminium), 20 — thread with glue or gum, 21 — brace (bamboo), 22 — streamer (filament or monofilament).
Note. The front edge of the first wing to 6 mm above the rear. The wing is covered with the upper side of the tissue (“rice”) paper without varnish. The frame of the keel of bamboo is fastened in the clamps, and brace. Cording to keel bilateral. The front hook is held in the sleeve due to the tension of the rubber motor. Weight 50 g.
But we, three friends model airplanes — K. Korneev, G. Margaritis and I was looking for my way. We have developed a well-flown schematic model of the type “duck” with one pusher propeller. In the second phase of the flight, he was discharged together with the exhaust rubber motor and the model went in flight planning.
In late August, 1926, Moscow hosted the first all-Union aircraft modeling competition. From Tambov seconded three of us. All the participants were settled in the third House of Soviets, and the models were placed in the Academy of the air fleet, in the great hall of the old Petrovsky Palace.
For flights provided the airfield at Khodynka (now the Central aerodrome named after M. V. Frunze).
Everything was perfectly arranged. With a warm feeling remember A. M. Rozanova and N. A. Babayev — employees of the Central Council osoaviahima. It was the zealots, the enthusiasts of the “small aircraft”. Chairman of the Committee of the competition was the commander of the red Army, member of the revolutionary military Council of the S. S. Kamenev. He in the morning came a Packard to start and all the days spent on the tarmac, showing a genuine interest in flying, the models and modelers.
Most of the presented models or schematic, with pulling propellers as the Transcaucasian modelers or model copy of Arrosa. Only one deserved special attention. It was very well done and well flown fuselage model, the only of this type. Its author was the modeller of bitter L. Kozlov, the man, utterly dedicated to aviation. Very humble, hardworking, talented, he soon became a wonderful glider (in the mid 30-ies of the goats was tragically killed in a collision in the air gliders in competition in the Crimea…)
All competition days except for the last very windy, the weather was quiet and Sunny. Each model was given five flights. Tambov single-engine “duck” showed itself from the best side. Now that the modeling relies on extensive experience and knowledge, they can seem primitive, the parameters are far from optimal. But then, steadily flying 350-400 m, they are significantly ahead and copy the American model, and all the rest.
On the last day of the competition model, which has remained unused attempts, most of them suffered accident from-for a strong wind. But one athlete from Tula, Shubin, was lucky: his model blown away at 410 m, which was a record result (usually models of Arrosa flew at 200-250 m). He became the first champion of the competition. Me with result 403 m was awarded second place.
Vividly remember all the exciting events of the day. So, on the tarmac I was presented to K. K. Artseulov an outstanding pilot, he was the first intentionally introduced the aircraft into a spin, and then out of this dangerous, mysterious another mode carried away in those years, a lot of lives. Then a group of modelers designer B. I. Cheranovskii drove to the hangar, where stood his small-plane “Parabola”, type “flying wing”, with an engine producing 18 HP Pilot B. N. Kudrin made on its demonstration flight. In conclusion, the winners of the competitions ride on “cadet-CE” seems to be a six-seater passenger plane. But in those days very few ever to fly! And we were delighted, watching top Moscow!..
It’s been 50 years, but the brightness of the impressions received then are still not faded. And the Ministry of aviation continues…