After exit 2 “M-K” for the year 1991, we managed to get acquainted with information materials on the development of the self-similar class E5 in the international arena. Of course, immediately had the desire to compare how close the world level the main provisions of the article “Replikar in model design”, raises issues of design of new car engineering. It turned out that, despite the lack of rich experience of the competition which managed to purchase some foreign athletes, we are much ahead of the time not in the results entered in the results tables, and design techniques to achieve the same goal. This is evidenced by our publications about the car with a direct drive for the last three years. And the creative search for perfection appear to be much more important than blind numbers number of points and points. After all, as they say, to correctly determine the direction of the path is almost pass it. More a matter of technique. Mentioned in the beginning of the article, in fact, is part of or the logical beginning of the proposed material.

If you remember the article “Replikar in model execution” begins with a discussion of the main provisions of the rules applicable to the car class E5. Now, the example of a microcosm representative of Germany Thomas Mines that achieved the highest results in international competitions, let’s see to what extent predictions have come true. Do note that the most popular new class of models is in Italy and Germany. Among the most active propagandists — Aldo and Fabio Valentini, successfully performed recently in class E3. Now they are at least four times in the season, showing results of the highest level.
Returning to rules: apparently, performance on the E5 yet still remained pseudoreplicate and not “moved” in the direction of becoming a pure sports “shells”. But vague regulations on the system of the reduction immediately manifested itself in… the intricate channel of the silencer, milled in the body of bearing part of the body. A careful consideration of the drawings taken from the Bulletin of FEMA, is clearly visible: this is a classic resonance silencer, only folded to U-shape and having the normal distribution law section length (as when measuring the length of the “tube” along the axis of the milled channel is also obtained that is necessary!).
Well, okay. If the drafters of the rules wanted to exclude the possibility of increasing the rapidity of the models due to the ban on the resonance of the exhaust system, it has not succeeded yet. And the ingenuity shown by the designer of the championship-winning model for using inaccuracies provisions only does it credit as the designer. 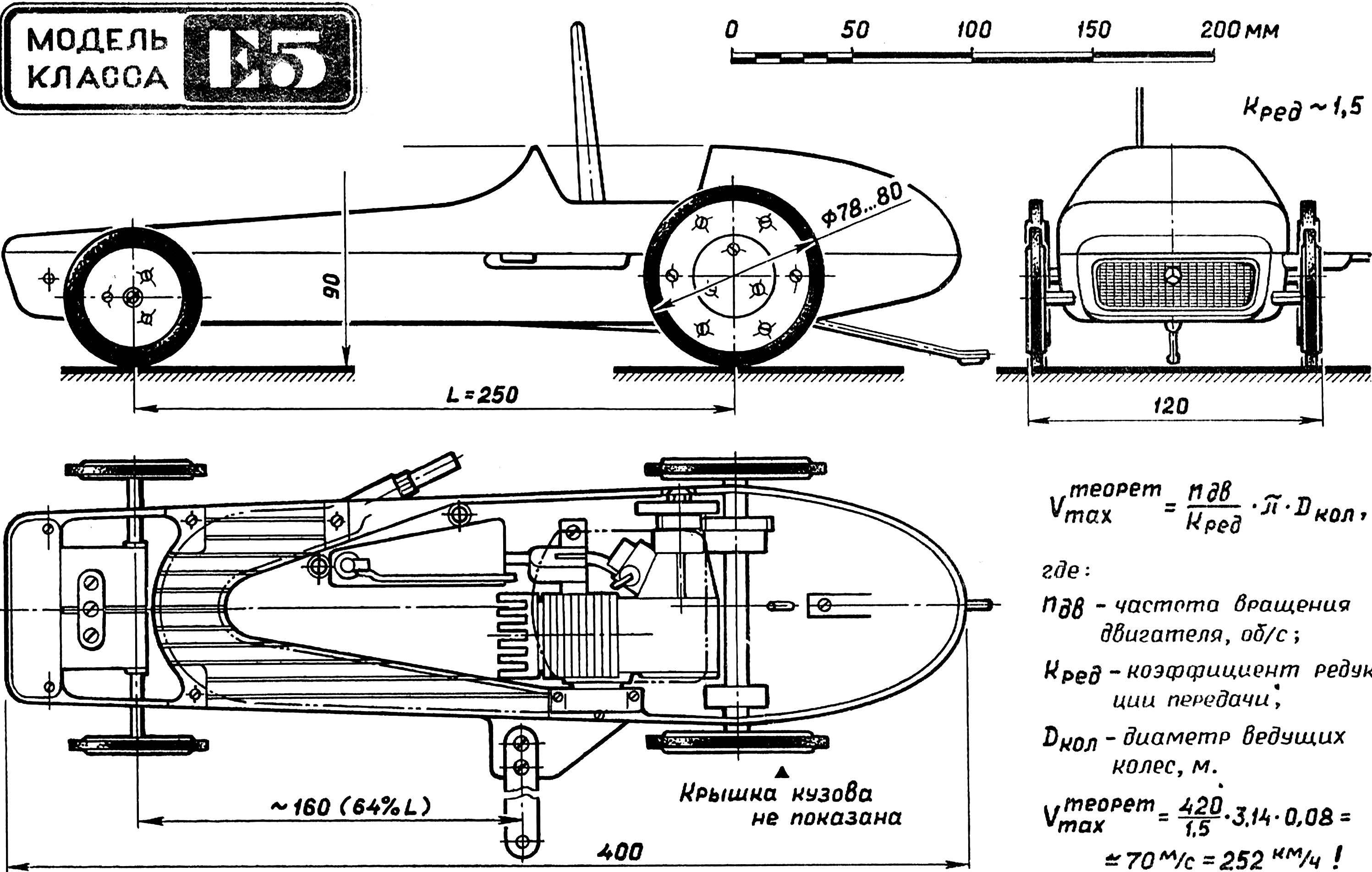 The car class E5 German athlete. You can see the approximate calculation of the potential possibilities for the speed of the model.
Best results shown at the official competitions in the class of E5 is equal to only incomplete 190 km/h. What is it? It would seem that superdigital the highest power (and working in the familiar mode with a resonant tube) and so low (if not infamous) speed. And the answer is simple. Look again at the model diagram. Position of cord strap set at 64% of the length of the base, says that the machine is made according to the usual canons of design and has “smeared” along the length of the mass. Now recall from “Replikar in model design”: the basic attention is given, on the contrary, the problem of concentration of mass in the area of the axle. Because only this technique can reduce the negative effect of vibration on the grip of the wheels with the track and increase the load on the drive axle!
Can not be considered successful and the location (direction) of the cylinder of the engine. Especially when you consider that various improvements motor like the full abolition of the crankshaft balancer is not in the style of Western athletes. What result would, in our view, be considered good? Let’s count up together. 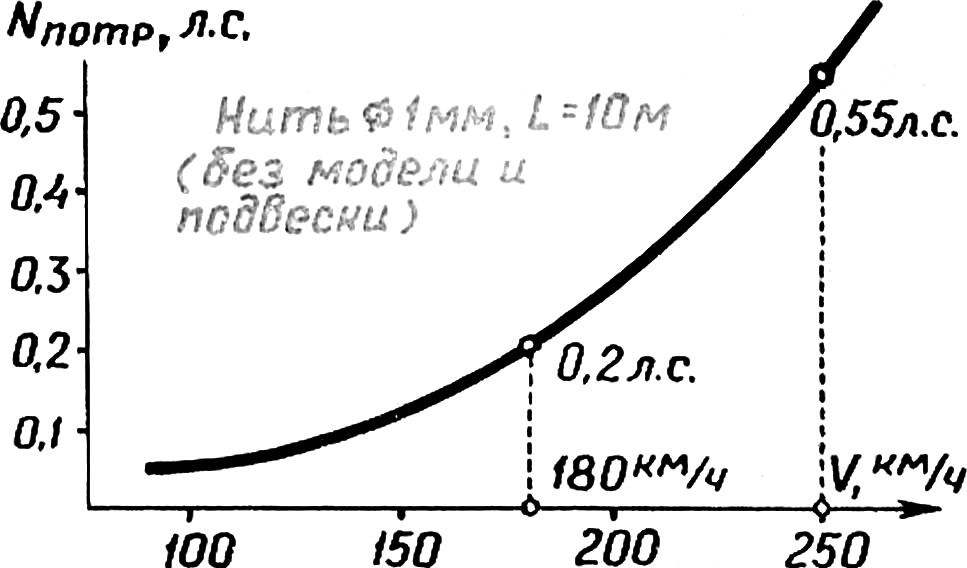 The dependence of the required power of the engine to overcome aerodynamic drag cords from the speed model. 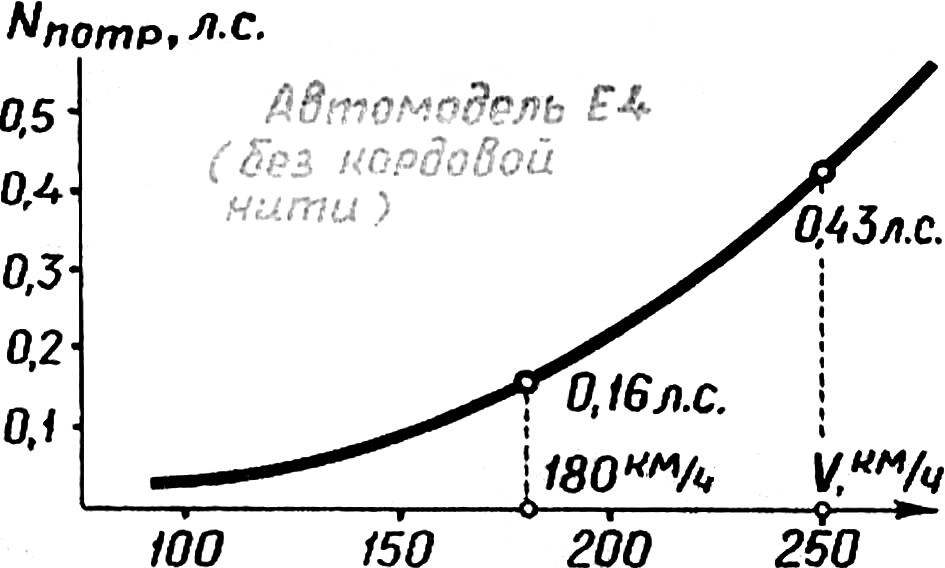 The dependence of the required engine power to overcome the aerodynamic drag model from the velocity of its motion (for class E4).
Very roughly estimating the figure the coefficient of reduction, and by taking it equal to 1.5, let us set a speed of the engine working volume of 3.5 cm3 with the “pipe” of 25 000 Rev/min. If you count the slipping of rubber on concrete in this model is equal to zero, the potential result… will be as many as 252 km/h I Agree, a very rough estimate, not taking into account even the power of the engine. However, correct evaluation can convince a different approach: let’s consider a car class as an intermediate E5 in cubic capacity between E2 and E3. But then the speed will be between the values 260 and 280 km/h, that is, 270. Make adjustments for the lack of explicit “sportsmedical” technique, and you will come again to the value of about 250 km/h. at the same time it will be clear that slippage of the wheels on the real model is simply unique, and all the efforts for the elimination of the effect of the “shake table” is fully justified.
We note in passing that the race of replica German athlete has in comparison with our sketches of the greater width of the body (and hence more aerodynamic drag) and a flat Board with closely spaced wheels (the possibility of air pressurization in wind gap). Yes, and elastic holder spur contributing to microresist cars with unsprung rear axle. 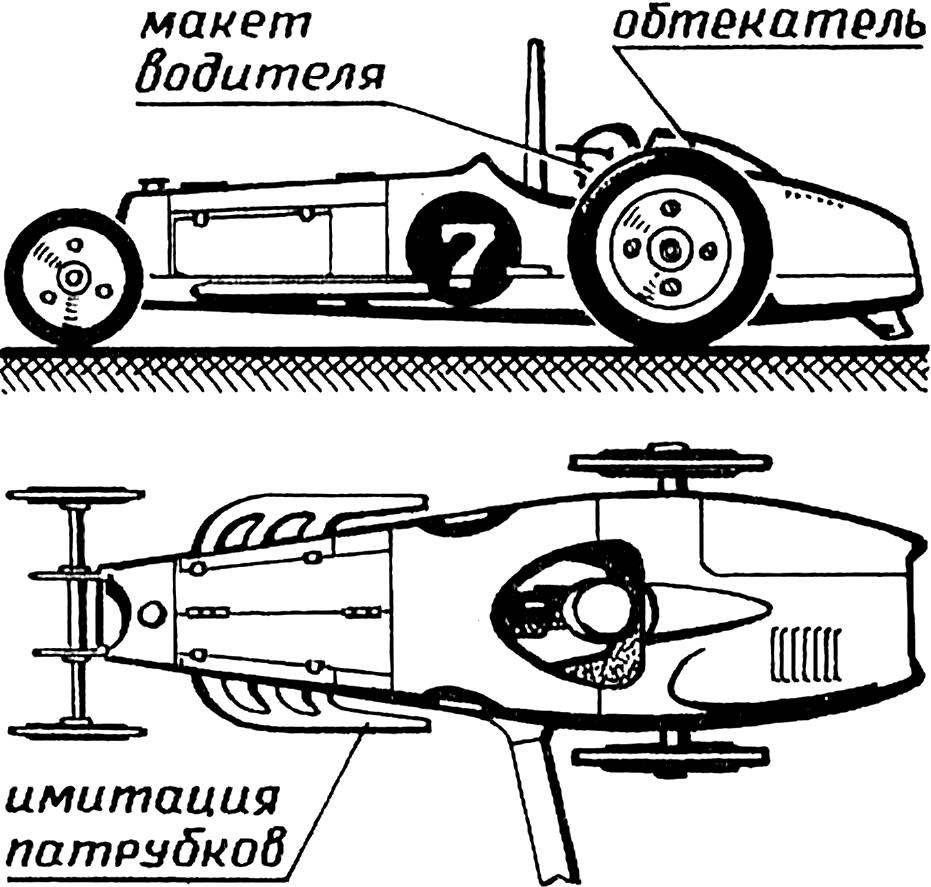 The appearance of the model (wealth of detail — depending on the taste of the manufacturer). 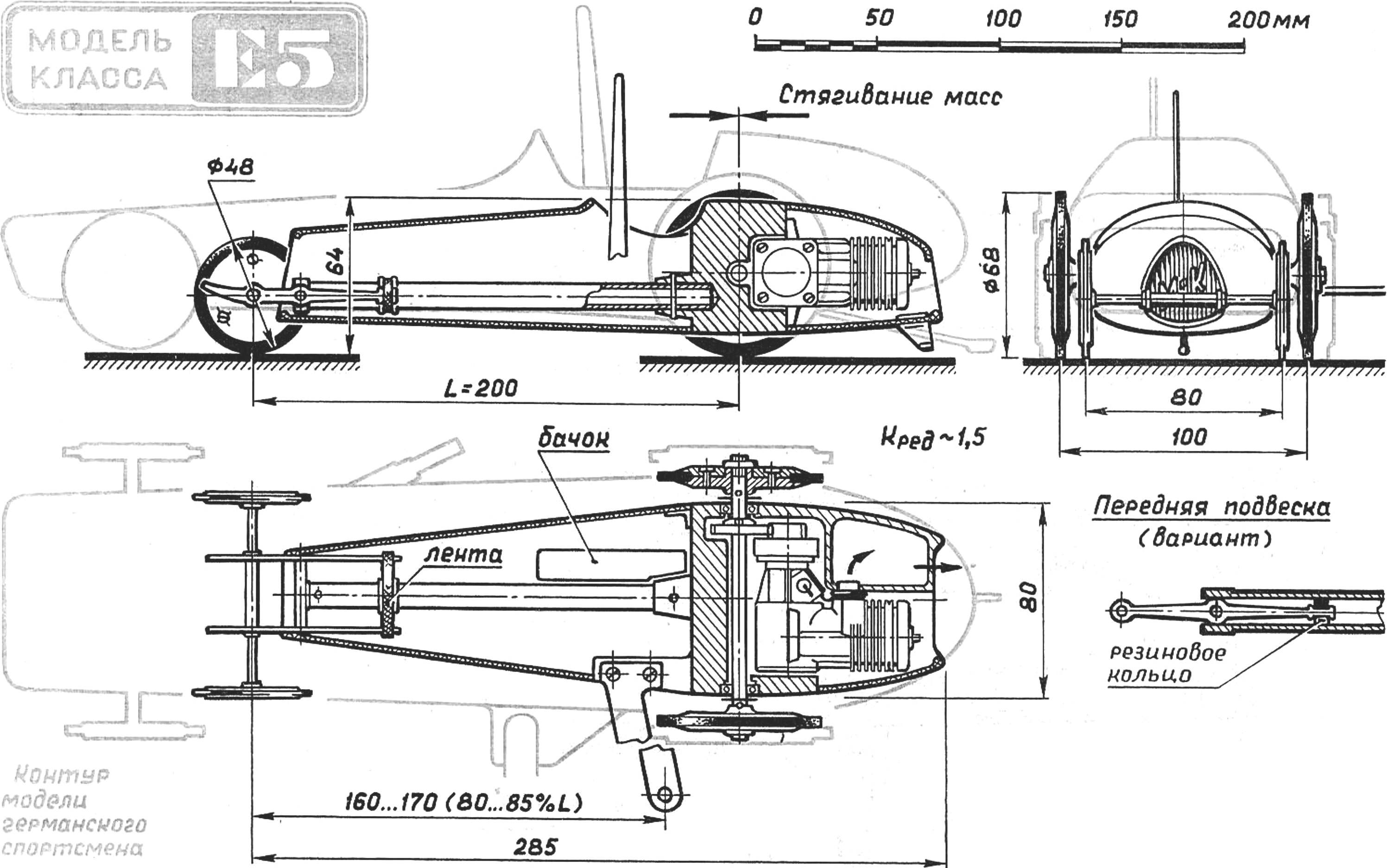 A promising model class E5 designed considering possible amendments to the rules concerning the system of noise.
Let us turn to specific proposals. But before that it is useful to be acquainted with the schedules of capacities necessary to overcome aerodynamic resistance cords and the model itself depending on speed. Note that E5 is in a somewhat advantageous position, as in relation to the cubic capacity of the engine are less than the diameter of the filament than in the classes E2 and E3. To plot resistance of the model due to the lack of reliable data on our equipment is selected appropriate to larger racing that allows us to consider — we have introduced some amendments in neurobiochemistry a “retro”body. It now remains to make the simplest, but leads to very interesting results calculation: to lay down a required power for the speeds. So — 0,36 HP 180 km/h (in more than one “horse” in modern engine 3.5 cm3) and 0.98 HP 250 km/h. I Hope to comment on the matter nothing more is needed. 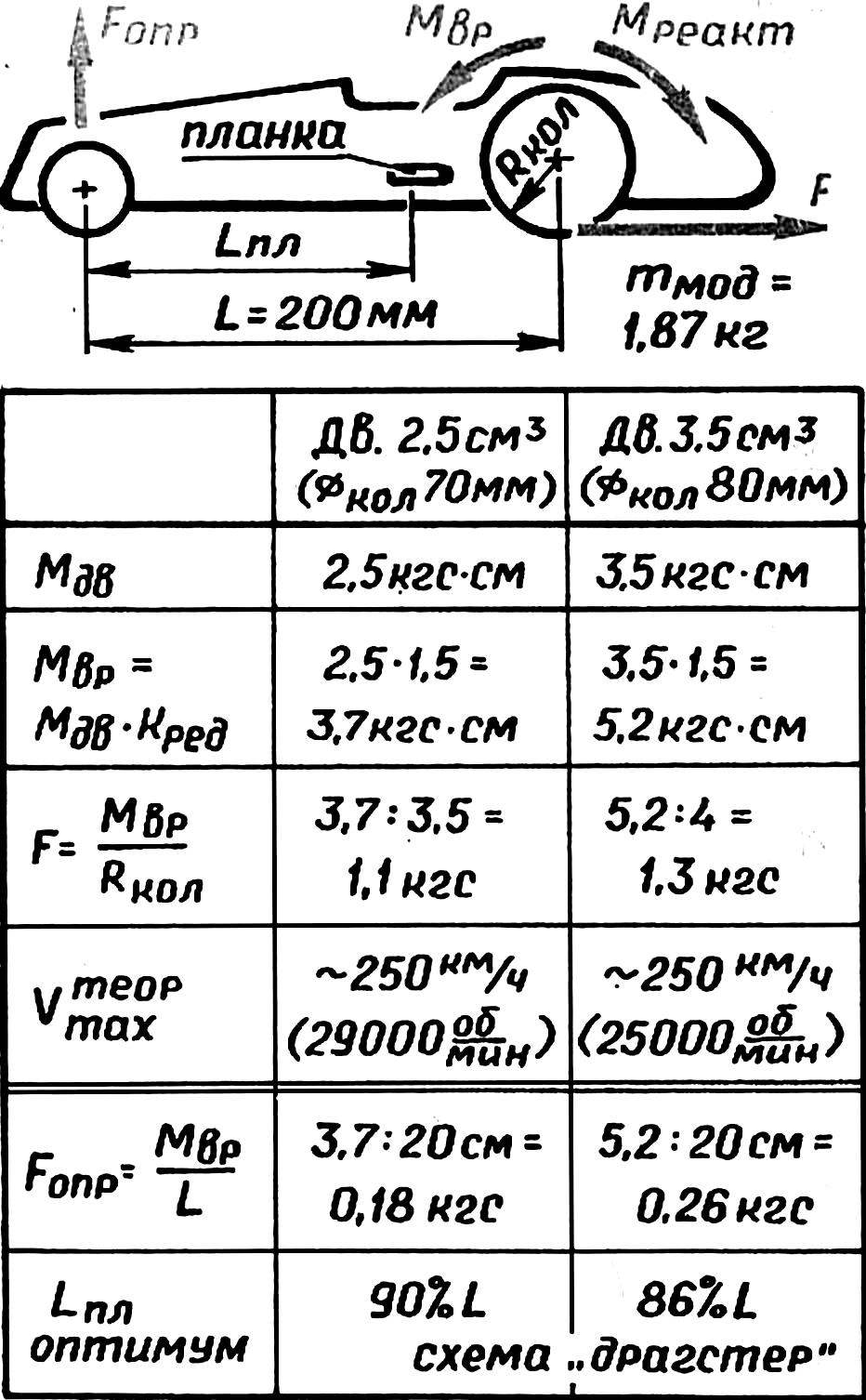 Comparative calculation for models with engines working volume of 2.5 and 3.5 cm3.
Offer advanced technique class E5 shown in figure 4. Again returning to the mentioned article, you will be able to fully grasp the logic of the design and to understand why in the end the motor was supplied with cylinder ago. About this model it is necessary to notice only that a valid still compress the front wheels. And for those who are interested in the possibility of installation on E5 engines working volume of 2.5to 3, comparative calculation of core strength and alignment in both cases: that is enough.
V. NOVIKOV