And still they build these “crazy” dragonflies, looking unusual even against the background of experimental models of Buchvostau! Build them despite the fact that the class unmanageable rotorcraft problems and tasks much more than in any other. However, maybe this “incompleteness” are they attractive?
Rich experience in the design of unusual microvertical accumulated by the citizens. Their creators are constantly raised on the steps of the podium of the competition “Experiment”. One of these models we described in detail in the “M-K” № 4 for 1980. The published article is the continuation of the conversation about the time the helicopters of the Kharkiv school.
Modern time model composed mainly of helicopters of the coaxial scheme. Engine-mounted traction propeller creates the main lifting force required to set the height, and the reactive torque that spins the rotor. The screws rotate in opposite directions at the same speed, which makes carrying, about two orders of magnitude lower than that of traction.
The power plant includes serial compression motor KMD-2,5 and wooden air traction screw Ø 250 mm, H 75 mm, mount the tank and the counterweight with a software timer mechanism. All the elements combined into a unit which can be easily and quickly replaced, even at the start. Created a console located by the cylinder of the motor a significant imbalance kompensiruet counterbalance, for these purposes the fuel tank and the timer offset in the direction opposite to the engine head.
Timer program: time limitation of the motor and clutch shaft of the main rotor with the fuselage for the forced landing of the model. The timer starts when promoted carrier screw touch of a finger rotating a wire lever, which stop the pendulum of the clock mechanism. 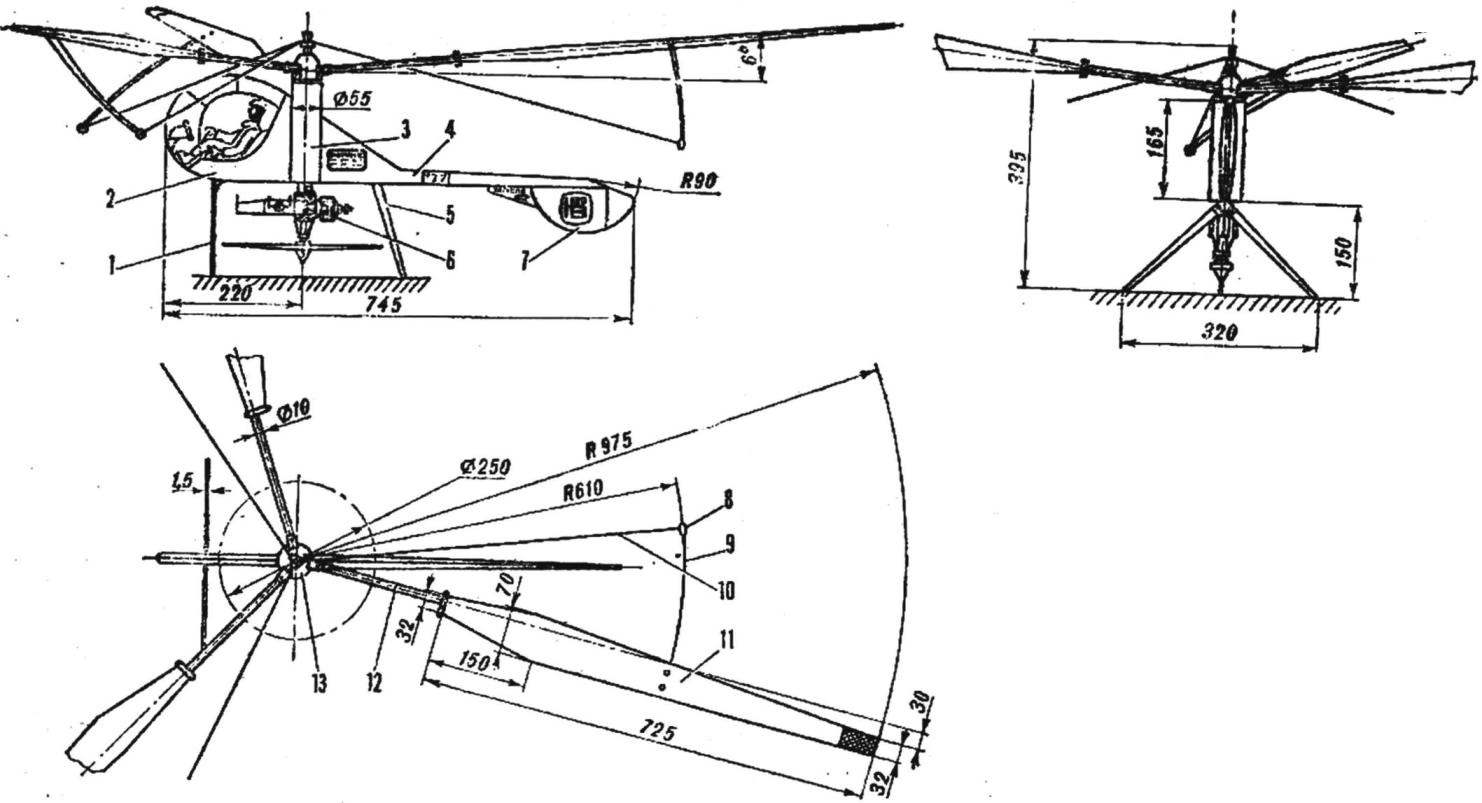 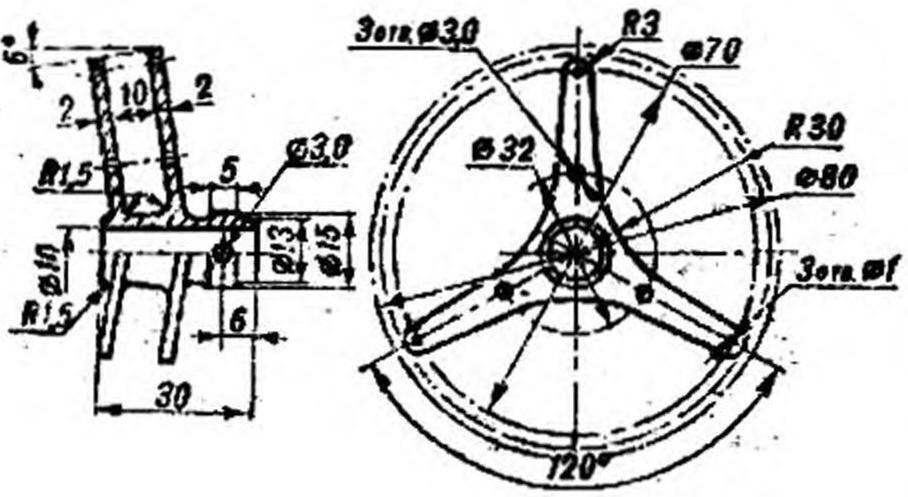 The design of the rotor hub.

The trajectory of the model helicopter:
AB — take-off; BV — climb; W — transition phase; GD — authoritiesi descent; DE parachutisme (forced) descent.
Engine mount with the engine mounted on the lower end of the shaft of the rotor. In the fuselage, the whole Assembly is mounted on two ball bearings, ensuring minimal rolling resistance; only when this condition is met, microventure will not be deployed in flight.
The fuselage. Its lateral projection simulates a single light helicopter with a large glazed cockpit and tail fin. The cross section is lenticular. The external contours of the cabin and the keel is laminated on a mandrel from a set of thin steamed Linden slats. Central (Sideleva) part of the cylindrical fuselage cross-section is pasted Inside its dural shell for ball bearings and in the front lower part mounted aluminum bracket front landing gear. Rear rack is fixed with a tapered pin in an aluminum tube, also glued in the fuselage. All racks are made of D16T sheet thickness of 1.5 mm. the Fuselage is pulled thin fiberglass and covered in bright polyurethane enamel.
The rotor. Mostly parts and components of the rotor design is similar to the model described in “M-K” № 4 for 1980. Compared to her-changed the following.
On the blades applied to two profiles. From the butt To the middle is MVA-301, and from the middle to the end of the blade — Clark-Y. the axis Diameter increased to 5 mm, they are made from silver steel and hardened. The blades are flat and without twist, the stops allow you to change their orientation angles in the range from -10° to +30°. The surface of the blades are painted black.
Flight tests. The first adjustment starts microperthite should be carried out in calm weather.
The engine operating time limit of 10-15 s. the Model is produced in flight at appreciable excess thrust after promotion of the rotor to a stable speed. Asked adjustment is reduced to the selection of such a distribution of the blade angles at which microventure goes up straight, without spirals. If the resulting direction of the spiral coincides with the rotation of the rotor, the mounting angles should be increased, and Vice versa. Selecting the values of angles for ascent with a maximum speed, at the same time appreciate the transitional regime and authoritywide descent. Note that for large installation angles of the rotor in autorotation mode, it spins slowly, has a low number of rotations, the model is reduced at a significant rate. At too small angles, the propeller spins up to high speed, helicopter down in a spiral, the speed of descent is also more calculated.
Achieving sustainable and rapid vertical climb and a good descent authorityrules, increase working time .engine to 28— 29 and intersect the total duration of the flight. Small changes in the angle of the blades improve stucco performance. Training runs are performed from the mandatory inclusion of automation forced landing. The results of the adjustment and the characteristics of the flight it is advisable to bring in . special notebook, the accumulated data will help to analyze the behavior of the model and to make the right decisions.
A prerequisite of any flying model is the observance of safety measures. Remember that rotating the screw may be traumatic and triggering and spectators.
Weight data model,
The engine with a propeller 200
Engine mount-pot with the shaft 55
Timer-counterweight Assembly 55
The fuselage with the bearings 120
Chassis 20
The sleeve with the rods and limiters 80
The blades of axes and bushings 165
Stabilizing – weights with brackets 60
The fastener 10
Weight of model without fuel 765
Speed the model parameters, m/s
Climb 5-7
Speed of descent:
authorityrules 2-2,5
parachutisme 9
V. NAGOWSKI, Kharkov