Developed in the circle of aircraft modeling station of young technicians of the city of Berezniki of the Perm region and the following proposed model of “air combat” is designed for mid-level athletes. They are distinguished by a good performance, sufficient strength and manufacturability. But for some modelers who do not have experience with foam lomikami or do not have access to the material of the required quality, it may be advantageous to use as the main material lime veneer (which, as a rule, can be made independently). Both bouzouki built on a “flying wing”, dominant in the Junior class and sports the “air battle” of the last decade.

The first model is designed for the micro internal combustion cylinder capacity of 1.5 CM1 and therefore has a reduced size and bearing area. Weight of model without motor is just 170 grams, which makes good performance properties at a low specific load and quite a powerful engine matched with a propeller.
The wing spar is made from high quality pine slats constant along the span cross-section of 4X5 mm. Nervure are cut from brushed lime veneer thickness of 2 mm, and after processing, the contour is greatly facilitated by the recess of the Windows. The Central rib (shortened bearing mount) is made of basswood with a thickness of 10 mm, and two ribs that form the backbone of the tail “fin” is lime with a thickness of 4 mm. Additional spar supporting the rear portion of a shortened Central rib, is formed by two pine rails with cross section of 3X5 mm. the trailing edge pine, slats wedge 3X10 mm. At the axis of the model from deflection under the action of tension trim support strut, sawed from a plate of limes and mounted on top of the wing. At the same time the plate is used for the traction of the Elevator through the wall.
The forehead of the wing is curved, the fake veneer of the thickness of I—1.5 mm Pre-veneered blanks steamed in hot water and dried, pribinova to the profiled mandrel. After drying, the brow customize in place to the frame of the wing and fixed with nitroblue. The back wall of the spar to the forehead do not have, so the accident occurred during the Assembly of the curvature of the frame cannot liquidate during a stitched Mylar film. Ending — ordinary plate of lime veneer, reinforced in the area of the spar and in the middle length of the triangular kerchiefs, based at the same time not end rib. The Elevator, as the most remote from the center of gravity of the model element, made of a lightweight material — balsa wood or Tung, and depending on the material has a thickness of from 1.5 to 3 mm.
In the installation of the motor of the host bundles of the Central rib and forehead with longitudinal increases developed plywood gussets at the top and bottom of the wing. Motor mount itself is cut out of beech and glued (not cracked) veneer thickness of 1.5 mm on both sides. Before the installation of the motor and the plywood gussets node in the assembled frame, you need to install the fuel tank soldered from tinned sheet metal and has the usual wiring scheme of drainage tubes, dressings and nutrition. On the back wall of the tank by soldering reinforcing wire axis of OVS 0 1.8 mm with rocker control. Pylon rudder is cut out of plywood with a thickness of 2 mm, the working height is 16 mm.
Finished the frame of the “flying wing” trimmed, then glued a fake forehead on amalite nylon ribbon (what do the bows) — this will dramatically improve the survivability of the entire model, as virtually all will protect the most vulnerable part of the model from cracking. In principle, pasting the nylon can be performed immediately after steaming and drying spanaway blank forehead, when she will still be on the mandrel. 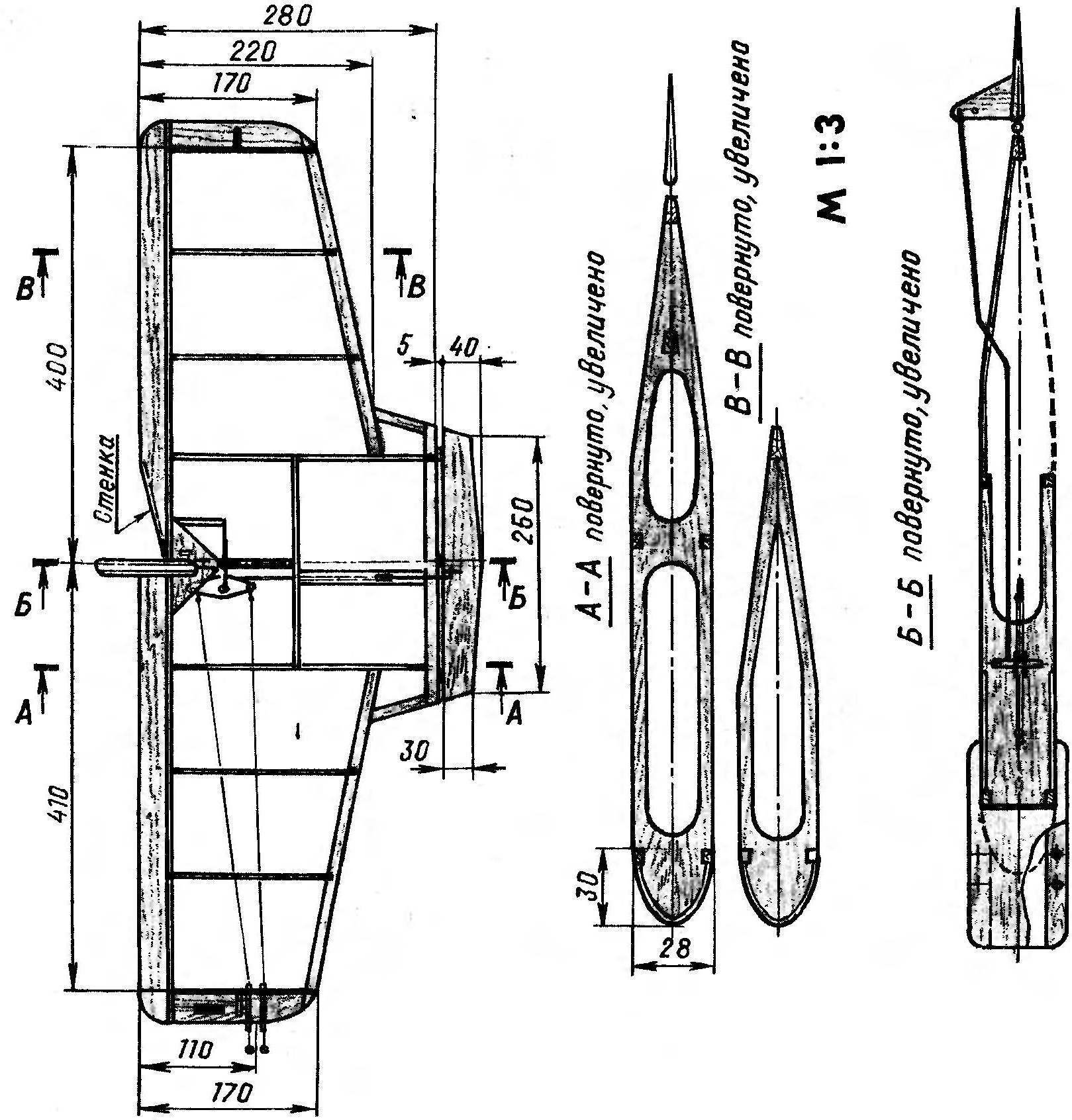 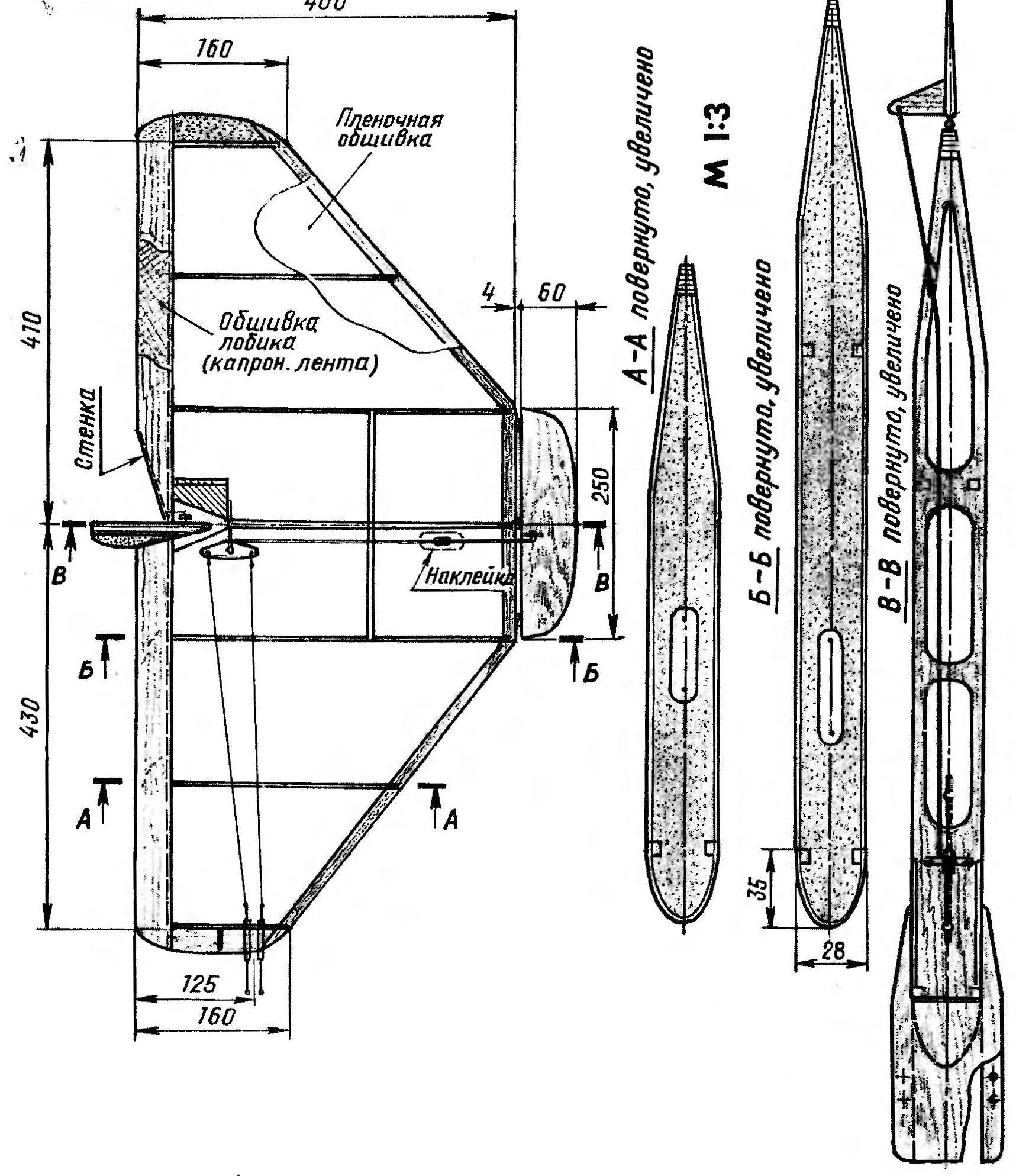 R and S. 2. Model of “air combat” under the motor a working volume of 2.5 cm3.
Mounting the wall at an oblique cutout of the front edge zone of the engine (because he manages to move the motor backwards to ensure the required alignment with a light tail model), proceed with installation of control rods and cables control and then to the wrapping Mylar film known among modelers of technology. If you fear that the power of the disposable version of the plant is not too large, it is useful in the area of the right wing tip to accommodate a weight of from 10 to 20 g.
The second model of “air combat” designed for Microdrive working volume of 2.5 cm3 and has options that allow you to take part in the competitions of the championship class. The tail part of the model — reinforced type, as the basis is to install a fairly heavy motor, type KMD-2,5. From the first model, this has a number of constructive solutions, enlarged wing area, and weight within 200 g.
The forehead of the wing on the plan and design is virtually identical to the first model. Differ only in the sectional shelves of the spar that supports the middle of the Central rib — they are made OF PINE 4X4 mm For moulding VENEER the forehead using the same mandrel, and the cross-section of the forehead remains unchanged — it is only more developed along the chord.
All intermediate and end ribs are made on technology “sandwich”: procurement of packaging foam with a thickness of 8 mm banded contour Linden slats 1X 8 mm. trailing edge of the wing is laminated on a simple mandrel from six lanes Linden section 2 is 3 mm, that the application of nitroblue gives the total cross section of the trailing edge Z X 12 mm. the Central rib is made of wood with a thickness of 3 mm, and the cross section of the workpiece in the area of the additional spar to the front edge is increased to 8 mm. Motor design plays the first version of bouzouki, however, for greater rigidity it is reinforced on the left fairing of solid foam connecting it to the forehead. Left the ending cut of the lime plates, and ahead it is supplemented by foam plastic “adapter”. The right ending telephonophobia, covering the surface of the tissue paper on the glue. The thrust of the Elevator carried through the film from the trim and window framing, thick “Scotch”.
N. YAKIMOV, Berezniki, Perm region