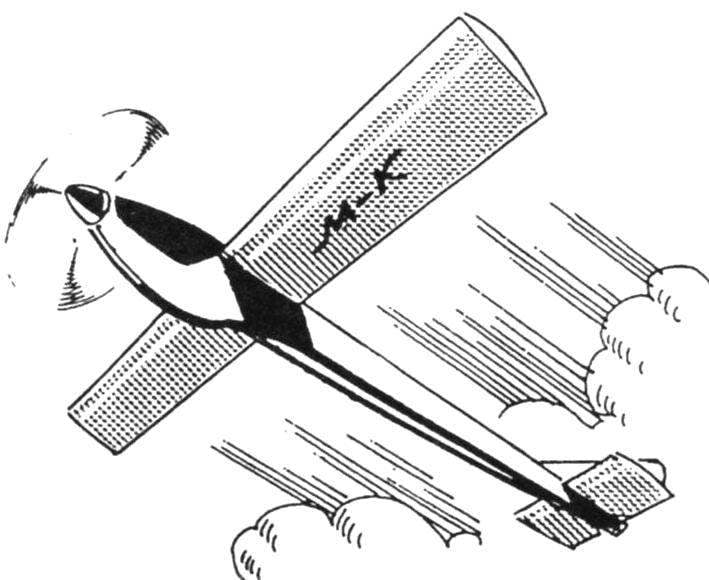 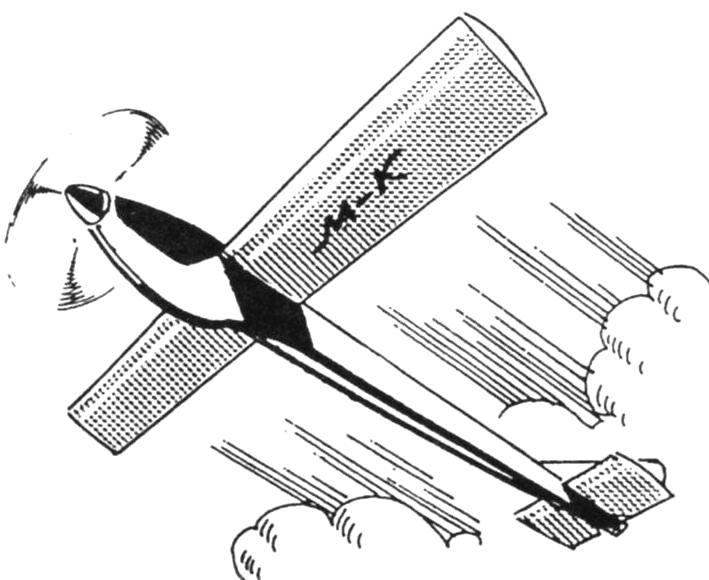 Schematic model of the airframe and the aircraft, as you know, started flying much earlier than their full-size prototypes. Paving the real aircraft’s path in the sky, they are now helping novice modelers to do their first steps in small aircraft. It is a pity that the modern “schematicity” do not differ from those that did even our grandparents: all of the same pine strips, aluminum wire, model aircraft rubber, a little tissue paper, yarn and glue. No new materials, no advanced design and engineering techniques.

This publication is offered to novice modelers a simple universal model, which the manufacturer is not much more complicated schematic, but its aerodynamics and, consequently, the flight data is on a modern level.
The model airplane can be performed as in the variant of the airframe, and rezinomotornaya aircraft, however it makes sense first to compile it in the first embodiment, and then, after mastering the skills of the Modeler startup and adjustment of this aircraft, equip it with a propeller and rubber motor.
Aerodynamic design of the model – you-socoplan with the wing of the big lengthening. Design – combined with application packaging foam, plywood and all of the same lime and pine slats.
The fuselage model consists of beams of N-shaped cross section made up of 1-mm plywood, and foam fill. Going to the fuselage with epoxy glue. At the back of the set of lugs, fixing the keel and the tail hook the rubber motor in the front – fake boss to the hub of the propeller. The latter is made from a piece of stem from a ballpoint or better yet, a gel pen, you need only one side flared plastic tube is heated by the rod of conical shape. 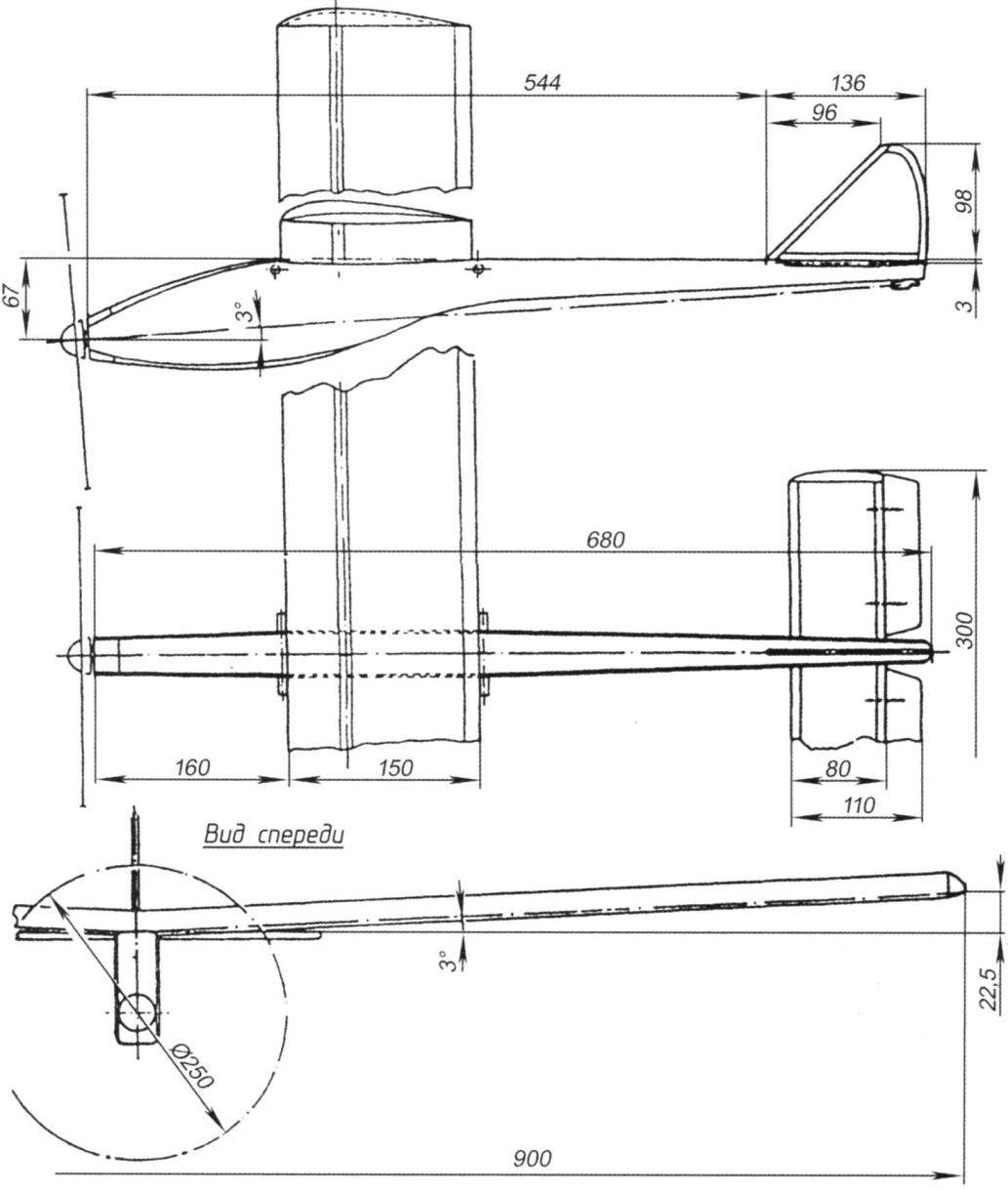 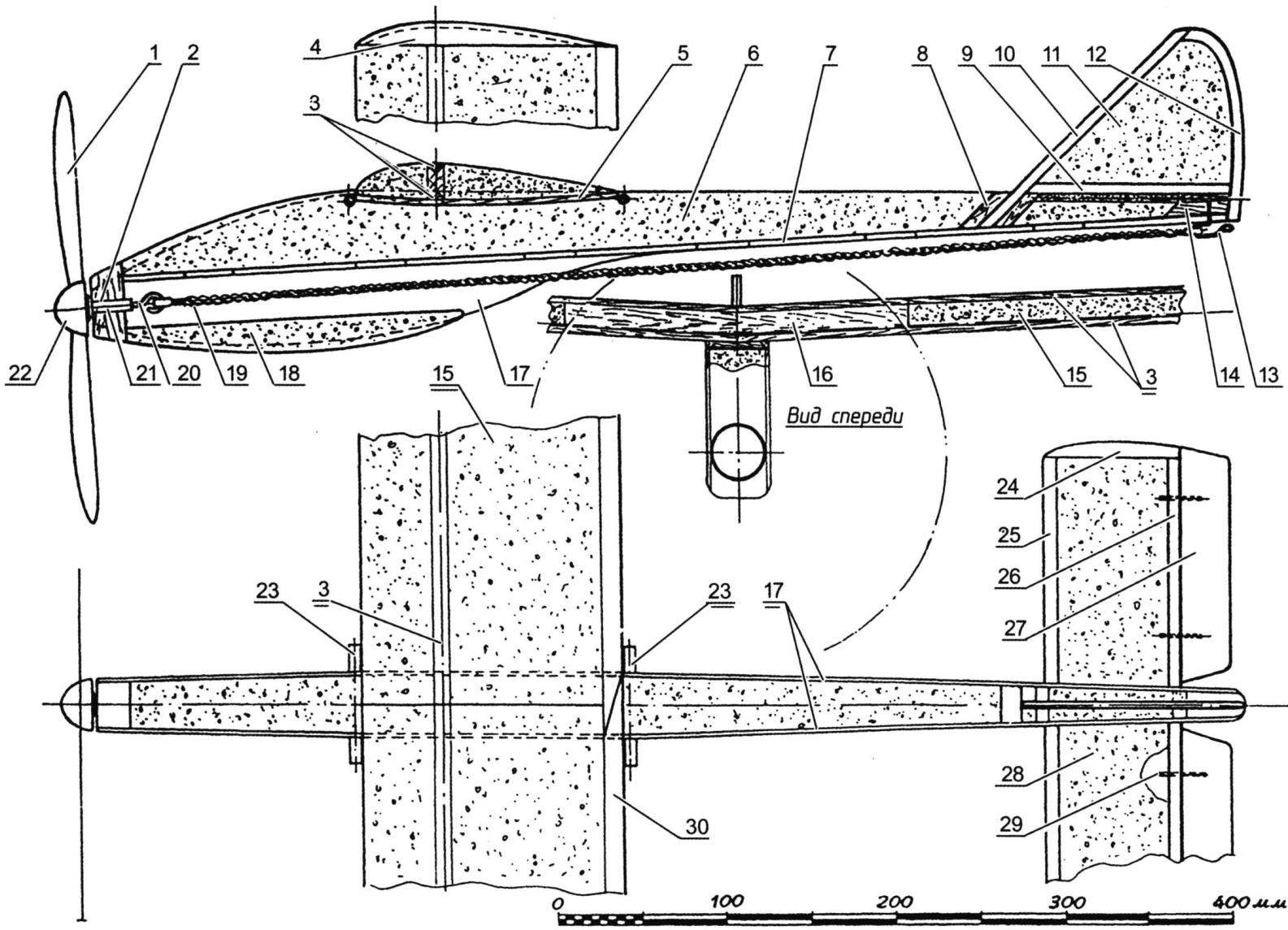 Beam of the fuselage:
1 – nasal boss; 2 – dividing wall; 3 – right side panel (left shown schematically); 4 – the details of the lugs with the socket under the keel; 5 – lug mounting hook
In the middle part of the fuselage is formed a cradle under the wing, which recess is cut and stitched a 1.5 mm lime veneer. For attaching the wing to the fuselage using rubber rings used beech pins with a diameter of 6 mm, glued in the fuselage at the leading and trailing edges of the wing. The wing is fixed with a pair of beech dowel pins with a diameter of 4 mm embedded in the wing along the axis of its symmetry; in the cradle for these pins are drilled corresponding holes.
The keel is a foam-filled frame, the front edge and the root rib which is cut from pine slats, and the rear edge is from 2 mm plywood.
Horizontal stabilizer – a stabilizer consisting of a pine frame and foam fill, and hung him to the elevators. The last are made from basswood and are connected with the stabilizer with a kind of hinge – segments of soft steel wire (e.g. paperclip) that allows you to choose the optimum installation angle of the rudders when debugging the model.
Wing of mixed construction consists of two consoles. The basis of each of the foam core, reinforced with a pair of pine slats-pine spars and trailing edge. The core is cut from a foam block tormaresca made from luchkovoj saws, you only need gear tape-hacksaw to replace the electric current heats the nichrome wire. Cutting also requires a couple of templates cut from aluminum in accordance with the table control section – they are a guide when cutting the foam. The degree of heating of the nichrome wire is chosen empirically using Later: it must be such that after passage of the wire through the foam, it remained smooth, glassy crust. The finished foam core clipped back edge and instead is glued with epoxy resin of the pine rack. Further, on the upper and lower wing surfaces at a distance of 50 mm from the leading edge (30% of chord) are cut with grooves of triangular cross-section under the beam flange. You can use the razor-sharp knife or Bong that is much better, with a special tool, the device which is shown in the figure. Beam flange – pine slats of triangular section to produce them, by cutting on a mini”circular saw” diagonal slats of square section or sostragivaja part of Reiki a miniature plane. Glue shelves are all the same “epoxy”.
From the thus prepared consoles is going to a single wing, which is used for set between the shelves of the spar bridge. The latter is made of two plywood plates with chamfers sawed, glued so that it formed two groove type “dovetail”, which provides a rigorous docking consoles. The rear edge of the consoles glued “on condition”. At least the wing glued two hollow fake ending. 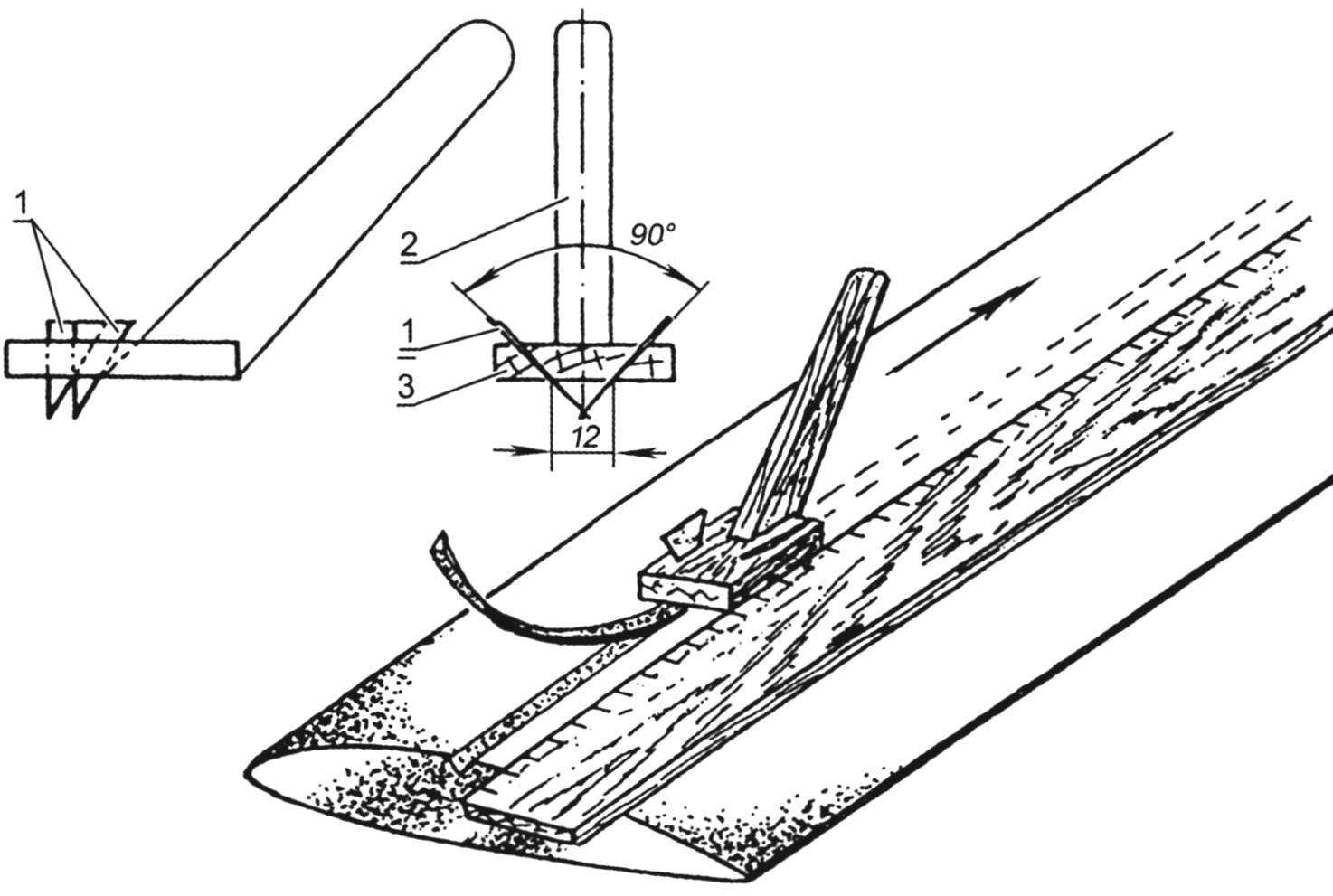 The theoretical drawing of the propeller
Trim the foam surfaces, in principle, can only consist in the gradual polishing of the skin decreasing grain size, however, it is better after this surgery primed the foam with epoxy glue, after curing again sanded the surface and painted them with enamel of a suitable color.
Before running the model in the version of the glider should choose the alignment, placing the channel under the rubber motor any cargo. Alignment should be located on a 25 – 30 percent of the length of the SEA wing.
If you run the model it would be cool to swoop down, you should bend the elevators up a bit when you pitch up (climb with the loss of speed) down. The trajectory is properly adjusted models should be a straight downward line. To launch the glider from the rail is required at the bottom of the fuselage to attach the hook from the wire.
For the conversion of the airframe, the plane will need an air screw. Make it from a suitable lime bar in strict accordance with the theoretical drawing. The concave parts of the screw stesyvajut miniature tsiklej or pieces of glass of suitable curvature. After finishing, a screw balance, which fits over the knitting needle, placed on two horizontal steel line. A heavier blade will pull it down, it should soshlifovat skin. Ambulancewoman right screw, if it is to swing must stay on the knitting needle in any position.
The finished screw is covered with several layers of varnish parquet. The screw shaft is curved from a steel wire in diameter of 1,5 – 2 mm. Between the bushing front boss of the fuselage and screw set brass smooth washer.
The table control section of the wing model plane (X, HC and mm – mm) 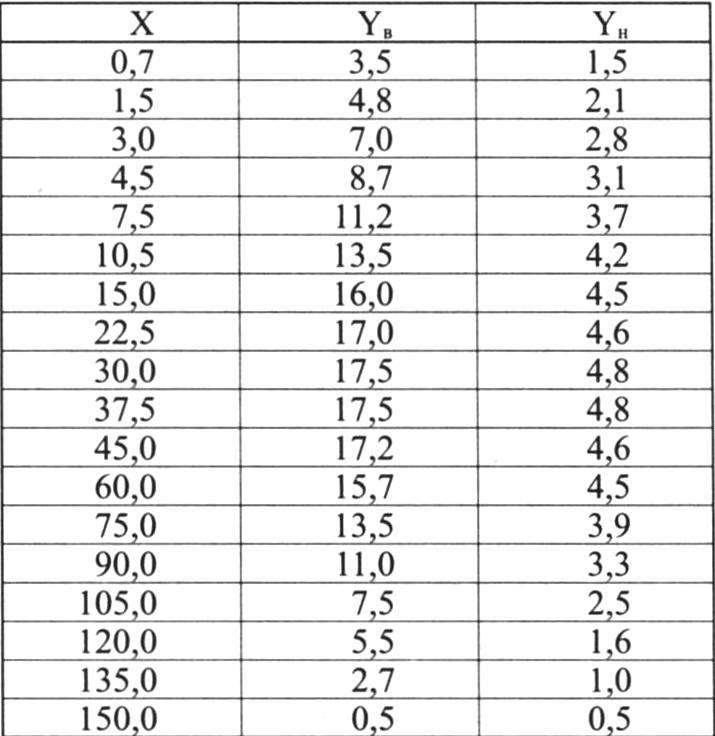