Many modelers, including the tracks, with a sense of nostalgia refer to the “veterans” of the automotive industry. And really, there’s just something incredibly appealing in those completely outdated, historic machines.Those who want a little diversion from the high-speed super-fireballs, dominating in all areas of modelistica capistrani, we offer today to play a very unusual prototype. Thus, despite the seemingly unfavorable ratios and proportions of the machine, to build in its explanation of the trace is not so pointless. The fact that the trace model uses the engine proposed in our journal No. 7, 1994, and having a number of invaluable advantages for copies of this type. Its big torque at low rpm doesn’t do high-speed microcomputers and very dynamic pickup that sometimes is more important than an abstract absolute value of the maximum speed.
Due to the fact that the proposed development is intended primarily for beginners and intermediate level modelers, when creating a model its designers allowed themselves to move away from modern fashion and back to exaggeratedly simplified techniques. An additional incentive was the design of a car prototype, based on a wide use of wood as in the manufacture of the body, and in a number of power nodes.
The basic principle of drawing the chassis of the model are well understood from the drawings. The basis of it is to force a “frame” presented by plywood monoplotting. Harvesting is similar to the frame glued to the epoxy resin of the three sheets mm plywood under the press, and the process of gluing it is useful to keep at least a small warm-up. The resulting material is amazingly strong and does not correspond to the usual ideas about aviation, not to mention construction, plywood. The closest analogue of the obtained material is a good PCB, although the latter is much more severe.
After fretwork courses and sanding the ends is,” what is plywood frame has a mass of only about 10 g when clearly pereizbytochen strength. If desired, the plate can be further facilitated by cutting through the large Windows in the area between the engine and the suspension unit of the front wheels. 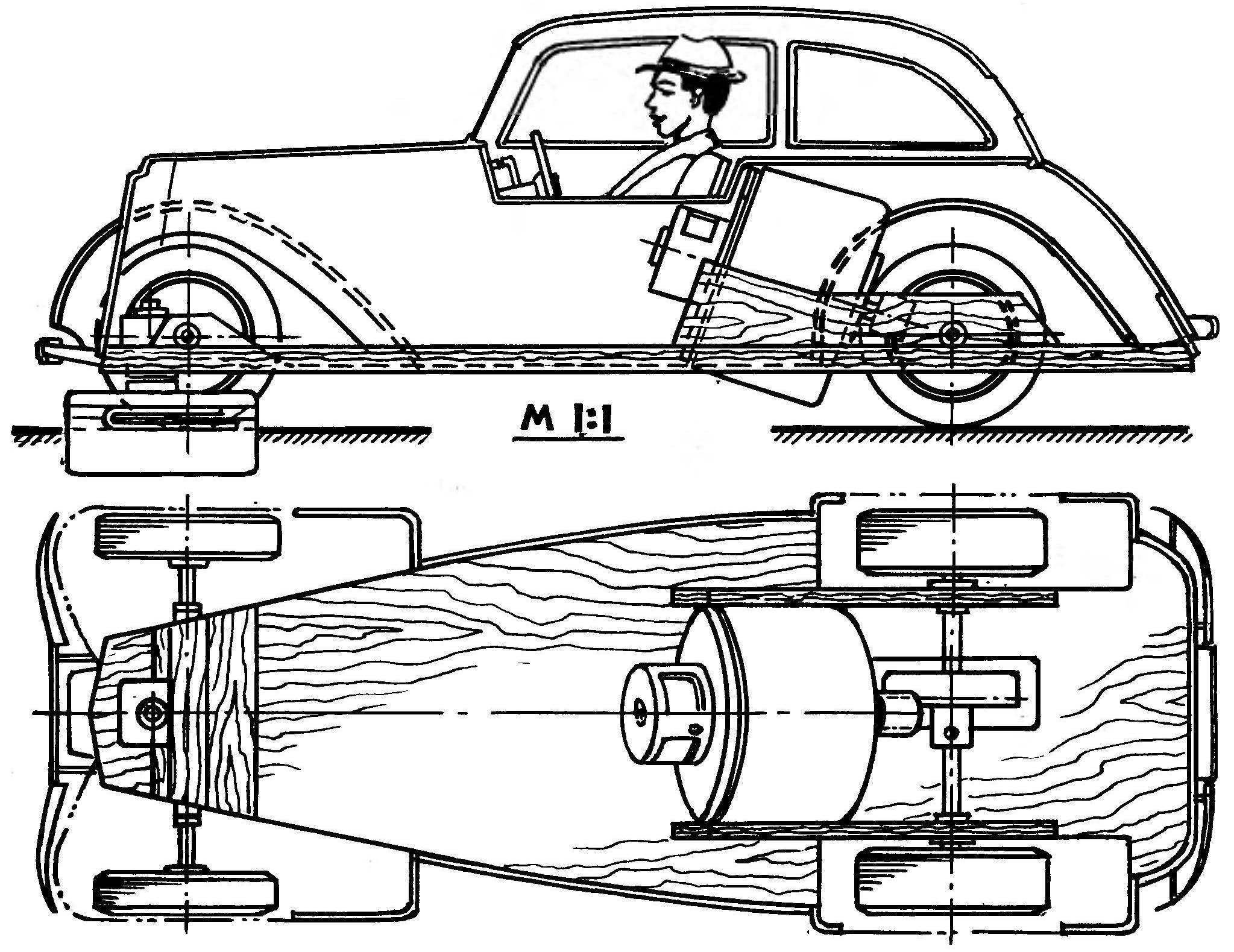 Trace the car-a copy of a power system based on the production motor brand MP-2-007. 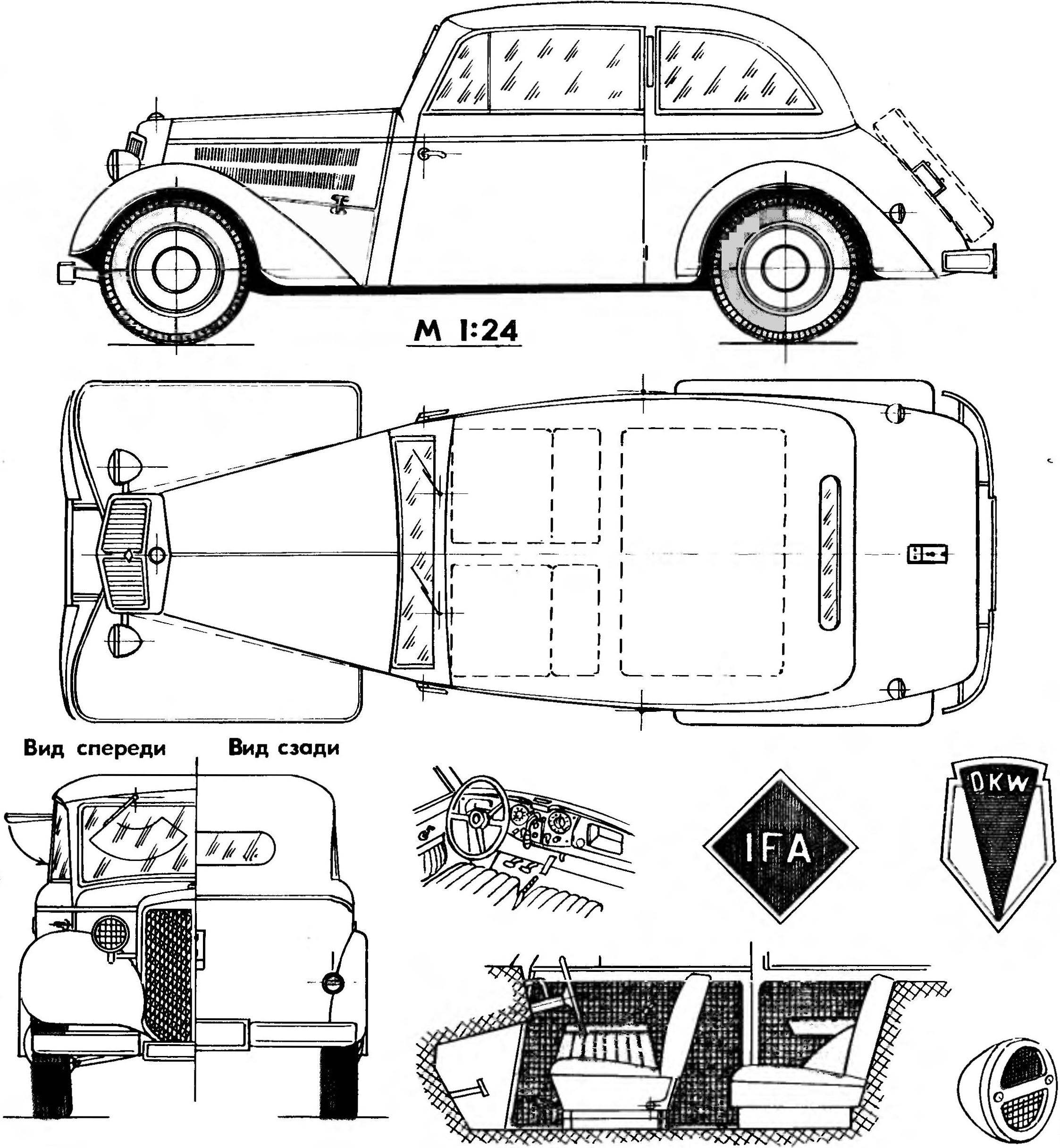 Four-passenger car DKW-IFA f-8.
Recommended in the manufacture of the frame immediately to provide for allowances, allowing both to carve out her plate and brackets engine mounts, and suspension axis of the rear wheels. Assembling the finished parts into the power node of the suspension model also good for epoxy resin. The reliability of joints can be increased by drilling from the bottom of the frame a few holes with 0 1 mm opening into the body of the engine mounting brackets, and the Assembly site at the same time to seal them in the bamboo “nails”stud.
The design of the suspension axis of the front wheels also exaggerated simplified. It is represented by only a birch stick and stuck it in the groove of a brass tube, which plays the role of the bearing axis. In front of the bar is glued beech small boss, the same carrier bearing for the axis of the T-shaped bracket of the current collector. The rear axle is carried in two bronze bushings, sealed with epoxy resin on the threads in the plywood engine mounting brackets.
On this model used, as already mentioned, the electric motor of the brand MP-2-007. It is being finalized in accordance with the recommendations of the article in issue No. 7 of 1994: is replaced by the cage of the body, and of electron or duralumin machined new bearing wall. The brush system is new, designed for big Tony. Its basis is the copper-graphite brush of rectangular cross section drawn through the brass cups of the corresponding profile and presses a spiral spring with a calibrated force. The motor shaft is also carried out using pressed with an interference fit in the walls of the bearing sleeves of bronze or brotherlike.
Body copy can be performed by a variety of methods, ranging from the classic papier-mache (wood disc) and ending with the modern methods of drawing from sheet plastic or veclachi of thin fiberglass. But the most interesting is the way, like the creation of a car-prototype — manufacture of body models made of wood.
In the latter case, all elements of the body hollowed out by quality lime and after the final sanding before painting impregnated with a two component parquet LAN. However, you must keep in mind that wooden body, with all its attractiveness will be more “weighty” and much less durable compared to the plastic. The questions of the masses on this route is very tough despite its lightweight chassis — it affects large weight large engine.
Drive axle — classical type, with the use of a pair of conventional cylindrical and disk-shaped gears. Gear ratio is selected empirically, depending on the desired compromise of speed and pick-up models.
In conclusion, I would like to note that interesting, unusual machine-a prototype can do a favor not only for athletes-tracks, but the followers of Cordoba copystate. The latest version will be very attractive narrow scale wheel and large amounts of the body allowing to place the engine any layout, even in small-scale (and hence more speed!) the micromachines.
V. NOVIKOV, head of the society of automodelisme