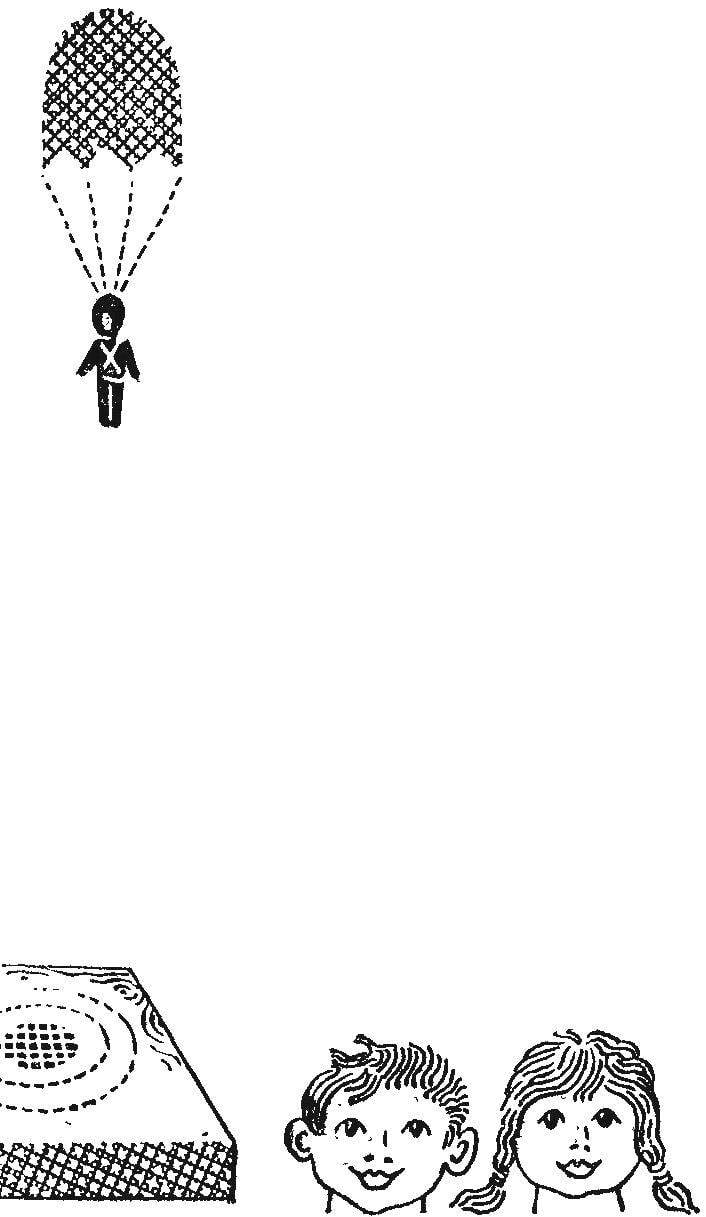 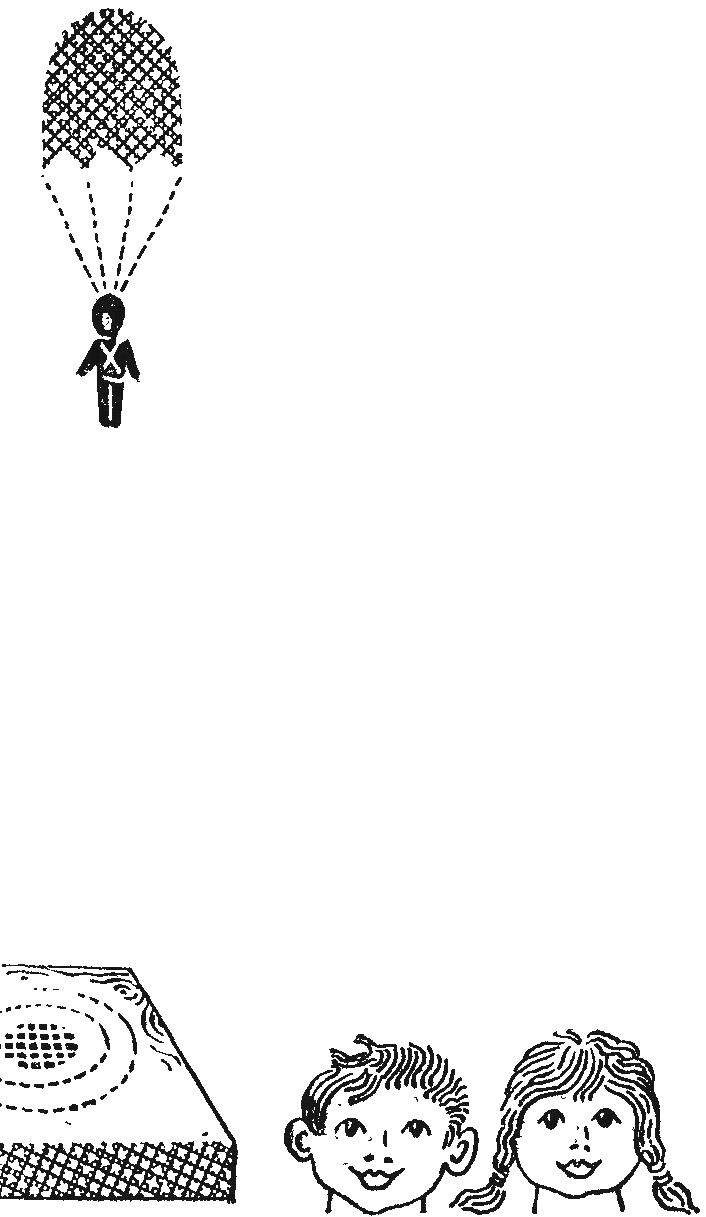 Well, I wonder are the guys changes and the free time in the extended-day groups at schools, where equipped your arcade room with a variety of devices to compete on agility, quickness, speed and skill. Some examples of such devices offer today to our readers-the students of master of sports of the USSR S. Glaser.
PARATROOPERS
For this game you need to make the parachutes and the square target, which the parachute jumping to precision landing is called a Piglet.
Cut out of paper or fabric circle and pull it through the edge of the threads or cords (lanyards). Connect the ends of them in a bundle and hang the load — out chute. As cargo, use carved out of wood or plastic figurine.
If you throw the parachute with the figure up, he first fly ball, and then falling under the weight of the load, open the dome and start to gradually decline. You need to throw in such a way that the landing had to be exactly square to the target. The room has a high ceiling, it is easier to put on the table.
If You are in Ukraine, namely in Mykolayiv, looking for a job yourself or friends, go to the site http://rabota.ua/николаевI hope it will help in achieving the goal.
The target is a square with sides of 50-60 cm, which is inscribed with four concentric circles. On each circle of the figure. If the parachutist landed in the middle circle of the target — 10 points, second from the center circle — 5 points, third — 3, and in the most extreme 1 point.
Each player throws his parachute three times in a row. The one who in the end will score the most points, wins.
MALLET
This game develops accuracy, and precision of movement. It is called so because playing use the cues, as in Billiards.
Equipped with a mallet on the table. First of all you need to make the Hoop: a wooden bar or plan to cut five arches of different diameter. Over each arch are written the numbers from 1 to 5 points.
Then take a few colored balls (number of players) and one white, strike the ball. 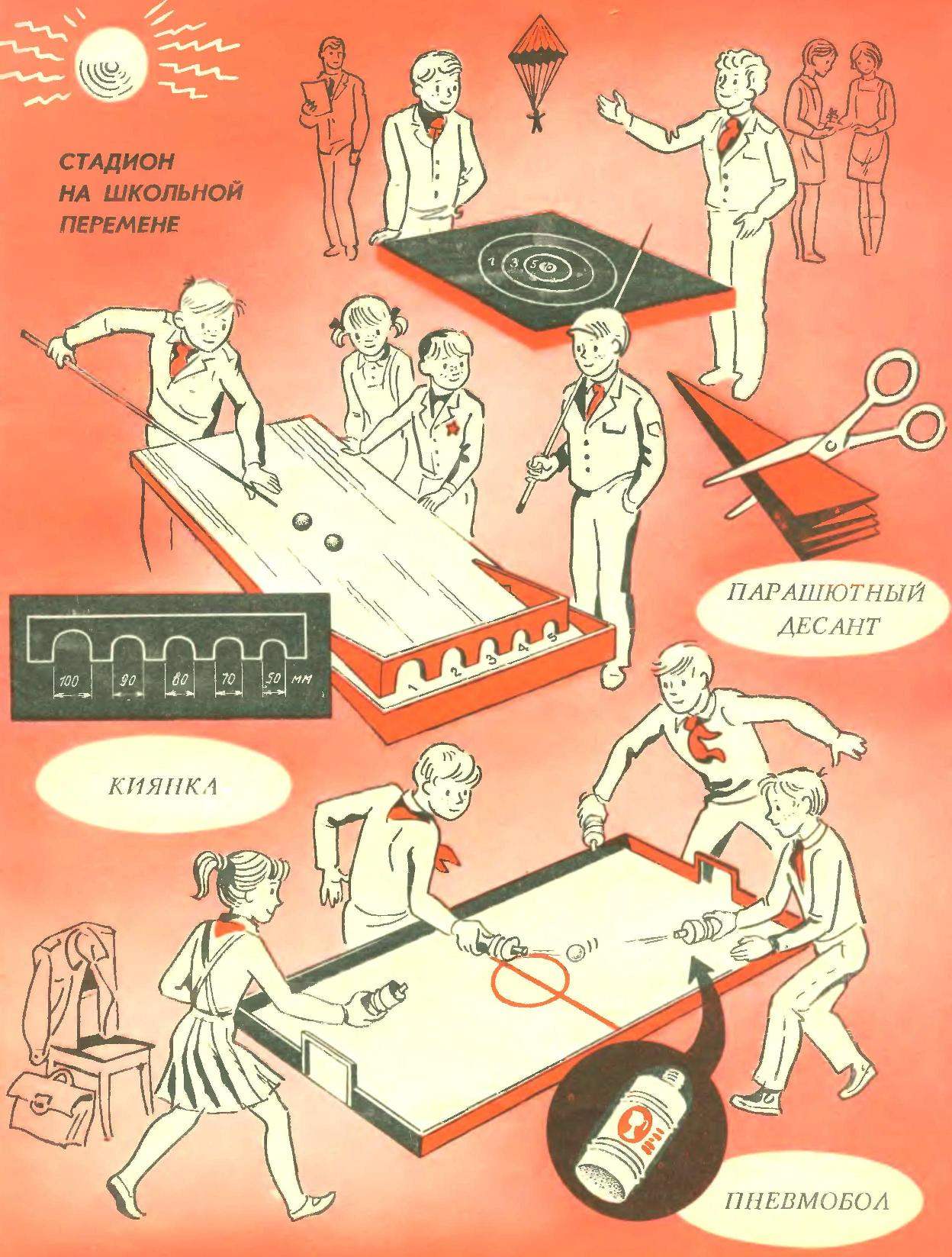 To gain the agreed number of points is not so simple: first hit the white ball colored with both eyes open; the second stroke is done with a closed right eye, then left and closed finally closed after aiming with both eyes open.
If the colored ball into the goal missed, the player loses the right speed, all to the beat goes to another. Got the same gets the right to repeat the course, observing the same conditions.
PRIMOBOL
Why not just come up with the guys to play one or the other of your favorite sports games in the indoor environment.
The Czech pioneers of the original foosball play it, directing the ball… a jet of air. Therefore, the name of the game — Primobol.
First, preparing a field: a flat wooden box 120Х60 cm, with sides of 5-6 cm On the short sides in the sides carved frame gate with the back of the net.
The game involves two teams of 2-3 people, but you can play together.
Every player in the hands of a small plastic canister with a hole in the tube. When the pressure turns out directed jets of air strong enough to drive the celluloid ball for table tennis.
Duration of game two halves of 10 minutes, with the change of the gate. Entering the game, the opponents have no right to touch their shells or celluloid ball. Each such violation shall be punished penalty.
Stations and clubs of young technicians, in the homes of the pioneers in children’s parks and the neighborhood children make a lot of allowances for games and desktop theme. Send us their descriptions. We share experiences of leisure.