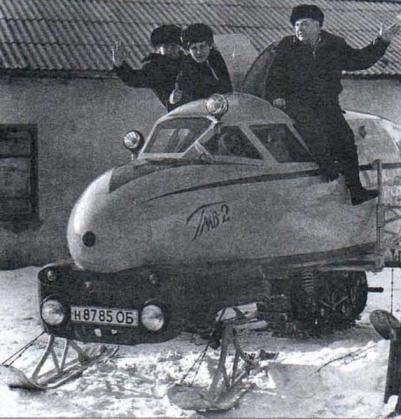 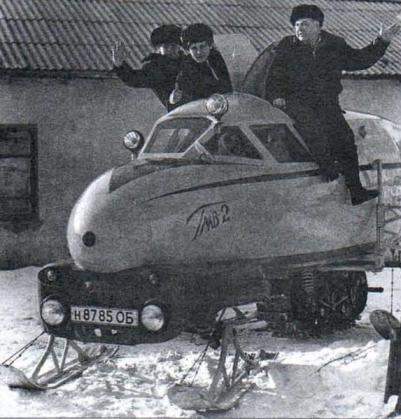 The construction of any improvised apparatus – be it a car, a snowmobile or even a plane always starts with a dream. Dreams of a person capable and motivated. Despite popular opinion that handmade are built from lack of money, the real motive is creative grain and desire of expression. In addition, active people are annoyed by the fact that in our country carelessly throw away and destroy still usable machines and equipment. Why not give them a second life?

So it was this time. The idea of a large snowmobile GMV-2 came to a head in 1970 Hundino Michael – 39-year-old Orenburg, who was then working at Kumertau plant engineering head of the Central measuring laboratory. The name of this design stands for the initials of the surname and names: and his son Vsevolod. But why is index “2”? Because at that moment Mikhail Filippovich already had experience building a similar machine, which he considered a test model on the way to the point their offspring.
The first snowmobile was built in 1968 – 1969 and consists of a small two-seater car with four leading ski and one caterpillar on the back in the middle. Overall dimensions of the sample, let’s call it GMI-1, was 5x2x1,7 (length, width, height) meters. The power unit was used from the ZAZ-966. Him the torque transmitted through the drive gear on the sprocket attached to the flanges of the axle shafts shortened rear axle, and with them, through the chain – drive sprocket original crawler unit.
Steering is used on its motorized, SZA. The body was made from aluminium and the design was similar to a small truck. Despite the apparent naivety of GMV-1, it was based on the basic technical ideas that are promoted in the second model, such as: basic structure -4 skis and caterpillar Central rear longitudinal position of the motor; a shortened automotive rear axle with two-way chain transmission to drive the tracks, the ski design.
Since 1970, work has begun on a new model ATV -GM-2.
As the power unit was chosen as a more powerful gasoline engine ZMZ-451М, interlocked with the transmission of the GAZ-21. This motor was put on the car UAZ-469 and had a number of valuable qualities: high torque at low rpm, maintainability, prevalence, possible to refuel gasoline And-76 and And-72. From the gearbox the torque is transmitted from the short cardan shaft GAZ-69 to a shortened rear axle UAZ-451 (GAZ-69). Further, through the double asterisk attached to the flanges of the axle shafts, the torque is transmitted by chains to sprockets, caterpillar tracks.
Clutch dry single plate with mechanical and hydraulic drive and gear shift – from the GAZ-21 “Volga”.
All the snowmobile was mounted on a tubular steel frame of the original design. It consists of pipes of various diameter (20 – 60 mm) with reinforcement at the mounting locations of the track and trapezoids rear cylinders additional parts. Overall the frame is simple and has a size of approximately 4500×1200 mm (length x width).
But perhaps the most eye-catching, this snowmobile is the case is the forward fuselage of a decommissioned training Sukhoi Il-28U. At the same time, like most of his brethren, he was in good condition, are quite suitable for further use. 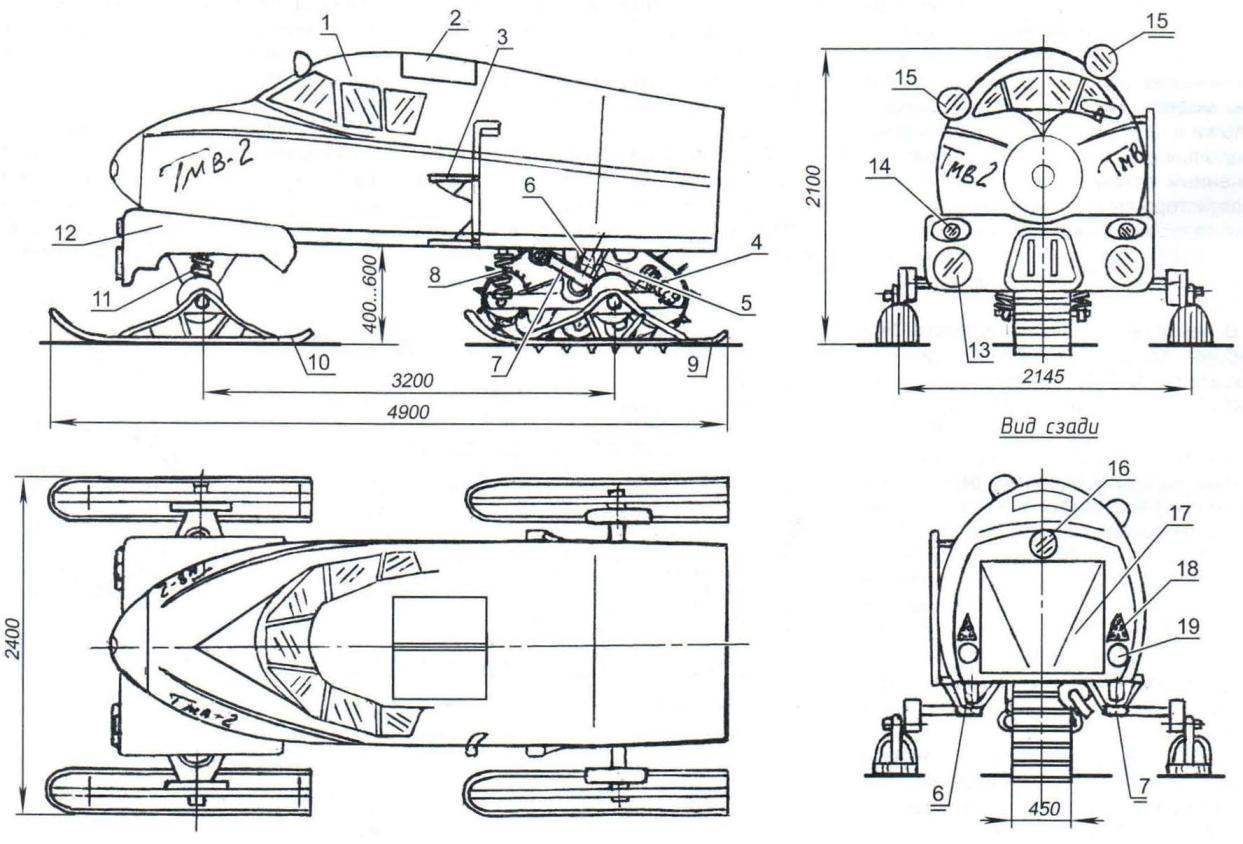 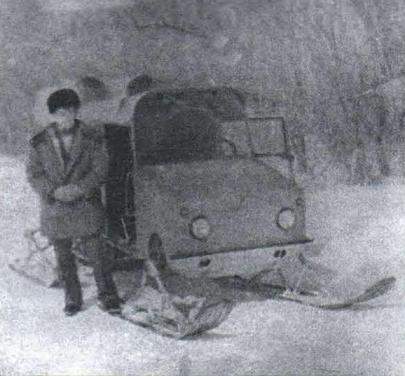 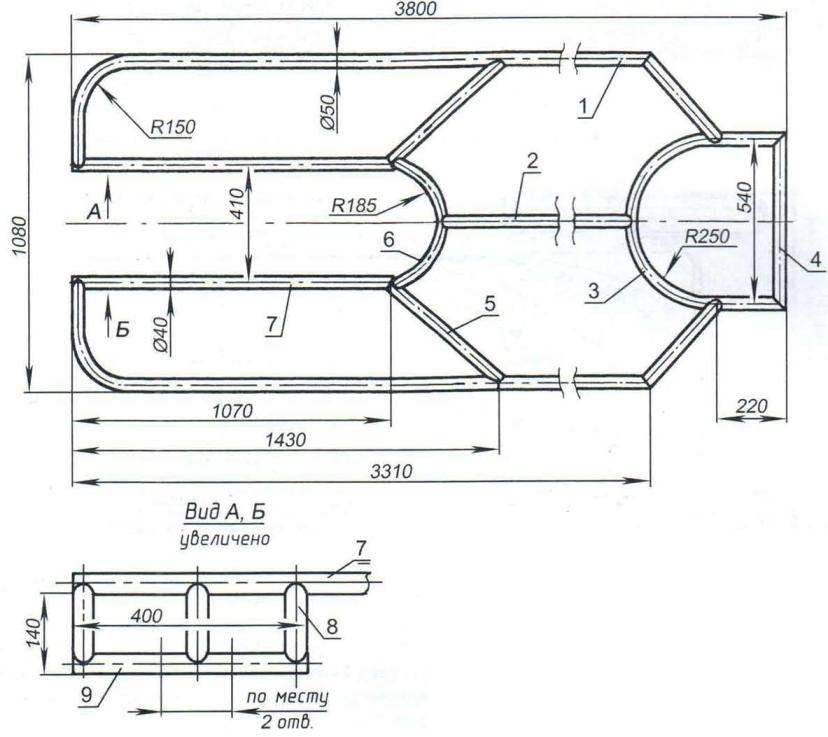 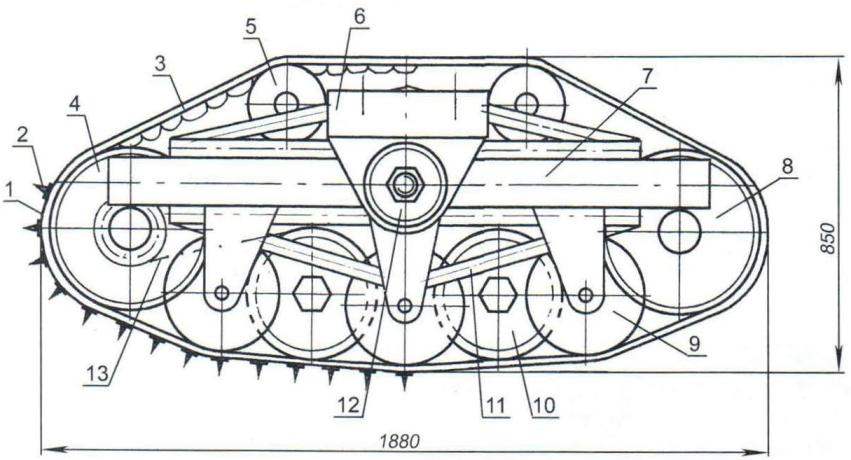 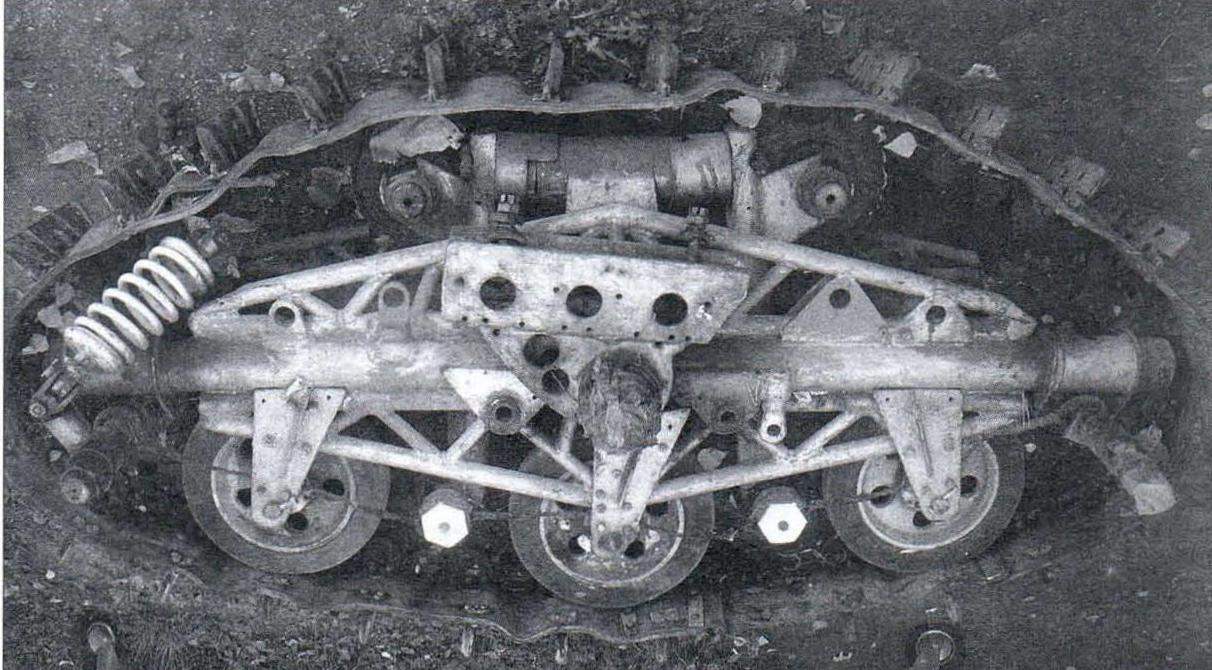 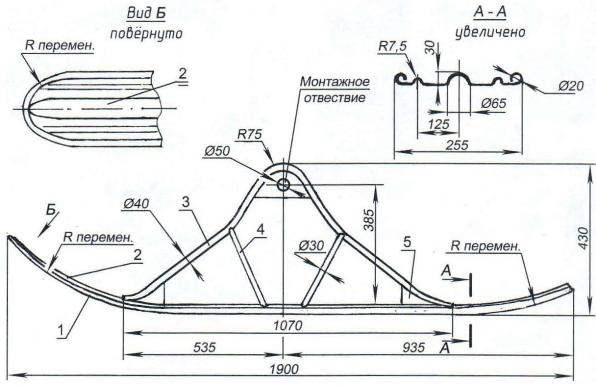 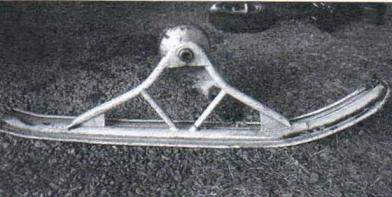 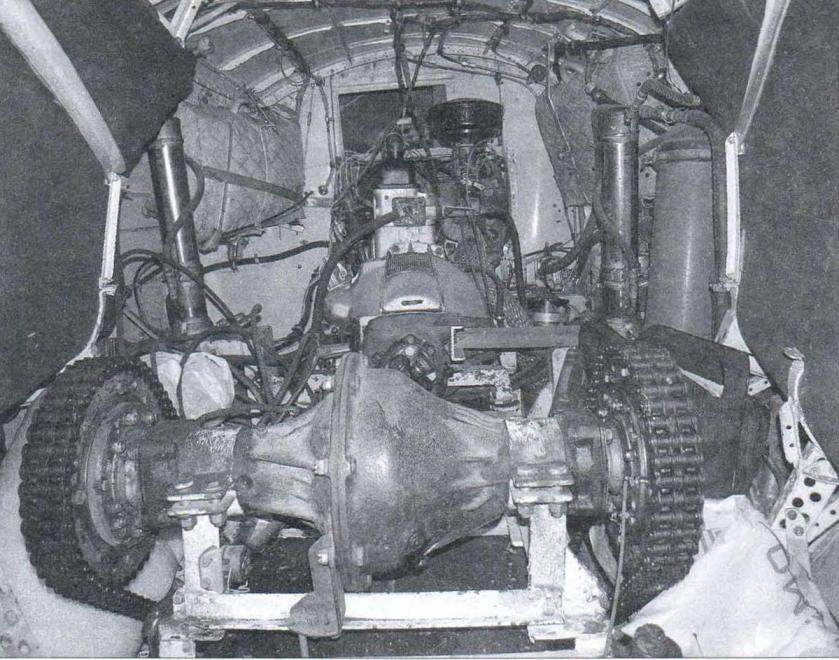 The engine compartment of a snowmobile 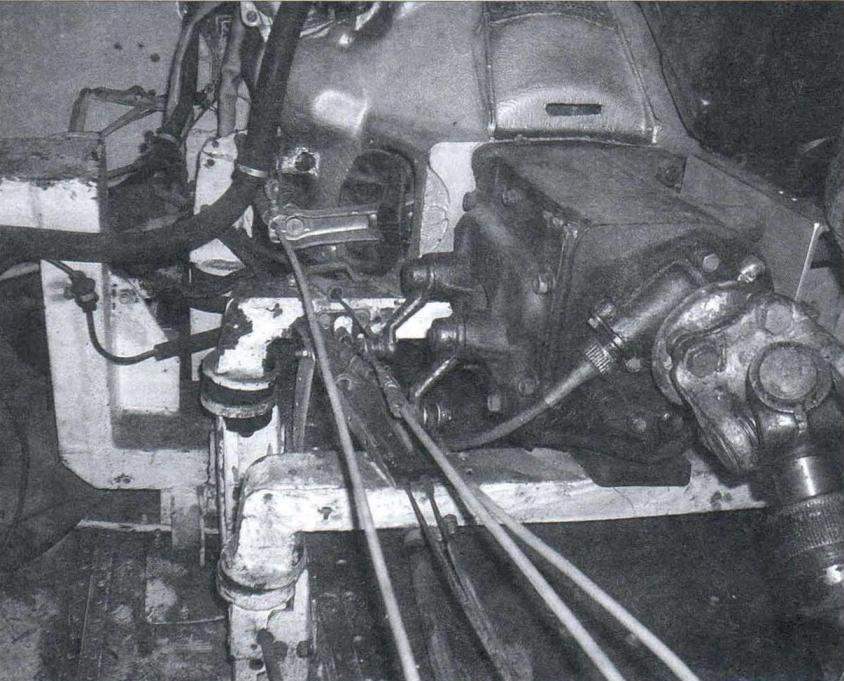 Of the cab of a snowmobile (driver and passenger) 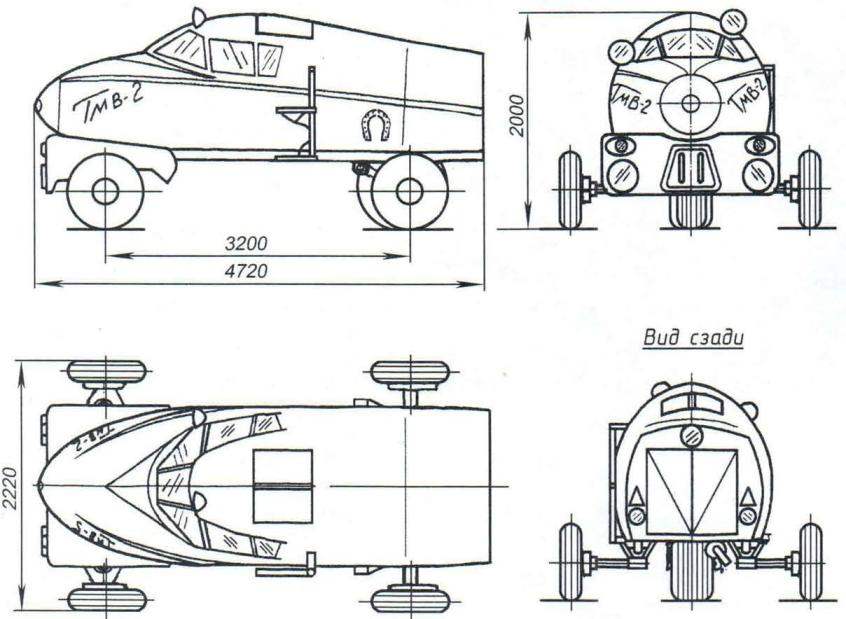 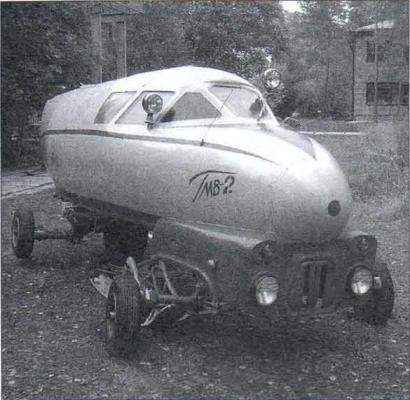 Wheel option (snowmobile, converted into a vehicle)
The next step was to attract sponsor and contractor search, able to establish small-scale production of GMV-2. The phase of the “great correspondence” began in 1989, with the first display of his invention at the exhibition VOIR, held in Orenburg from 5 to 9 October 1989, where he received many good reviews of ordinary art lovers and professionals. However, manufacturers were reluctant to put the design on the stream. A dozen industrial associations and factories during this time refused to produce for various reasons. Agree succeeded only in may 1991 with a small individual enterprise “Teflon” from Orenburg. Under the contract the firm has committed to delivering products to ensure the production area, inventory, and cash for the advertising and production of technical documentation. To ensure the start of the works were purchased at the airport 40 nose parts of the fuselage of the Il-28U. However, after August 1991, everyone was not up to the snowmobile. Spent the money, and “Teflon” closed the project. Already bought 40 of the fuselage was scrapped. Further search and research sponsors have not been successful and 15 years Snowmobiling was just standing under a canopy in the yard of a house on the outskirts of Orenburg.
At the end of August 2011 on the snowmobile learned enthusiasts of preservation of technics and took him to Moscow for participation in the exhibition “They built a car” dedicated to self-made cars of the Soviet period, the exhibition “Oldtimer gallery of Ilya Sorokin”, held in September 2011 in the exhibition complex Crocus city. After the exhibition, the unique snowmobile had taken place in military technical Museum in Chernogolovka near Moscow.
A. LAZAREV