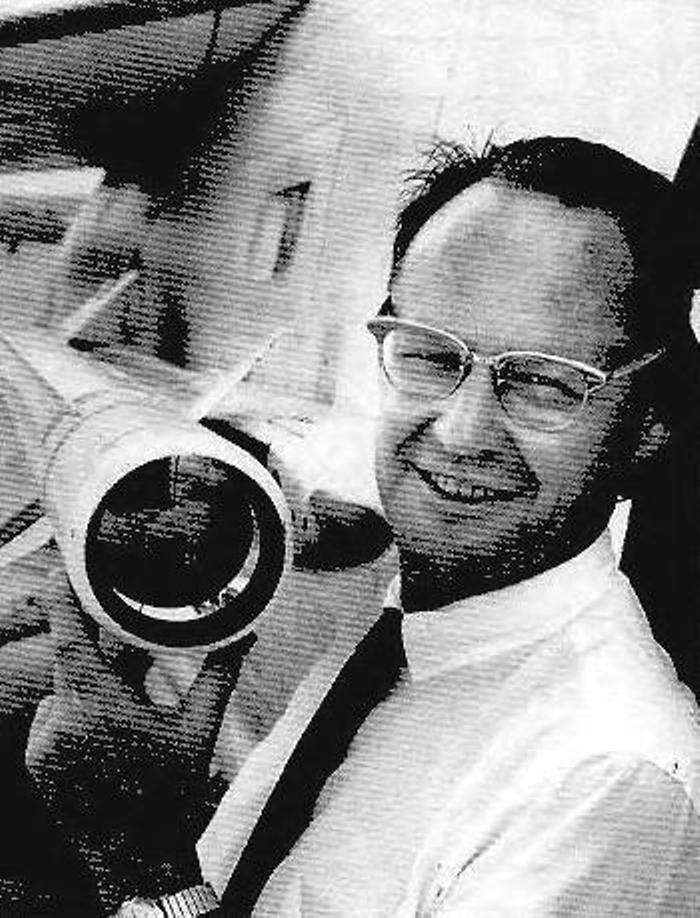 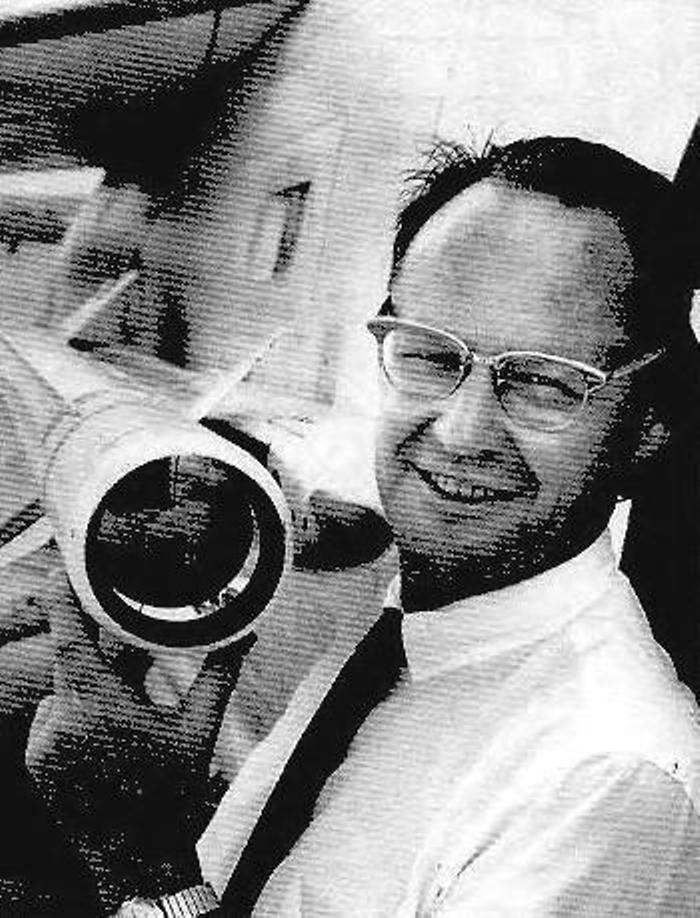 The German engineers before the Second world war began the development of guided air missiles “air — air”. Brought to flying condition samples and technical documentation “wonder weapons” were killed under the ruins of factories, prepared for their serial production, after the RAID of allied bombers in early 1945.

To the design of unguided missiles (nurs) the American experts have begun in 1940, in contrast to the Soviet Union and Germany, the US air force was considered by Nursi as a means to engage ground, surface targets and jamming radar. The creation of nurs of class “air — air” in the United States drew attention at the end of the Second world war. To enhance the combat effectiveness of the action at air targets with high-explosive warhead (IBC) Nursi was equipped with radio controlled fuses (PB). In 1945 a specialist from the National Bureau of standards 1 (NBS 1) noncontact RV — physics William Burdette Macklin sent on the Artillery proving ground of the U.S. Navy (NOTS) in China lake.
William McLean, a native of England, in 1939 he finished doctoral studies at Caltech University. During the work in NBS 1, he distinguished himself as one of the best engineers of RV anti-aircraft artillery. William McLean thought that the trip will take no more than two months, but he worked in China lake for 23 years. In 1954 he was appointed technical Director, emphasizing its leading role in shaping the programs and policies of this major laboratory of the U.S. Navy. At this time, NOTS, and today the weapons (RWS) United States Navy, was engaged in studying and summarizing the experience of war from the point of view of science and technology. NOTS was a multi-institution, has implemented the ideas into full-scale projects and transferring finished product to the customer “turnkey”.
Thirty-one McLean headed the Department of aviation and artillery of the NOTS. In 1946 he independently started to work on the aiming system for the rockets of class “air — air”. After analyzing the related system factors, such as altitude, speed, acceleration and maneuvering of the aircraft, he made a conclusion about the impossibility of creating in those years sighting systems for Nursi, ensuring the defeat vigorously maneuvering air target. Weapons must be controlled after start-up. In my experience of working on radar guidance system glide bombs ASM2 “Beth” McLean understood that such a device is not suitable for small missiles “air — air” — it is too heavy and bulky. From this position, the photoresistance (FS), stable trapping of thermal radiation of the target aircraft, will be comparable in size to a dime, so the control system, based on it, will be quite compact and efficient. During world war II, this small head with gyro-stabilized FS was developed by order of the US Navy-controlled bomb project Before the experts of the Corporation “Polaroid” Dianna Leonard and Ruth Sweet control system in Cambridge, Massachusetts.
In 1947, he started to develop a thermal homing (TGSN). The key idea used in its creation, was the gyroscopic stabilization of the rotor magnet, the axis of rotation of which is attached to a sensitive FS. The axis of rotation of the gyroscope coincides with the longitudinal axis of the rocket. The displacement of the thermal radiation source relative to the axis of rotation of the gyroscope resulted in a deviation of the reflected from the spherical mirror head heat ray from the center of FS. It generated a signal in the coil surrounding the magnet, forcing the spin axis to move towards the heat source. This meant continuous monitoring of the direction of the aircraft target. Drive used the amplified error signal to deflect rudder, accelerating the reversal of the rocket in the direction of the target.
For the realization of this idea was considered five options TGSN. As a result, for the further development chose the option in which the gyroscope is almost depended on the speed of rotation of the missile around its longitudinal axis. He is better than others has maintained the trajectory, and the rudders had to turn the missile to the rendezvous point with the target. At first this option was considered as a secondary and remembered when talking about the proportionate targeting.
In 1949 William B. McLean has provided leadership NOTS “Proposals for the development of missiles with a thermal guidance system”. The word “missile” meant approved in the United States terminology, McLean conceived the product as an unmanned aerial vehicle (UAV), and artillery ammunition — rocket. The UAV provides for careful handling and regular checks in the process of operation, unlike shell with simplified rules of storage and use. This approach to the creation of the rocket meant that it will be more durable, simple and reliable. William McLean was assumed that the price of his missiles will not exceed several hundred dollars, which was especially attractive on the background of guided missiles, created by well-known companies that cost ten times more expensive.
Due to the lack of full funding McLean started working out its concept with a small team. The first two years he used internal funds NOTS and the money allocated to the Navy for the establishment of the PB. At this time, the inventor has performed work on the theme of “Local Fuze project 602”, with the justification that TGSN will actually fuse linking the purpose of missiles to its operation. A later report about the new direction of research called “research Opportunities 567”. 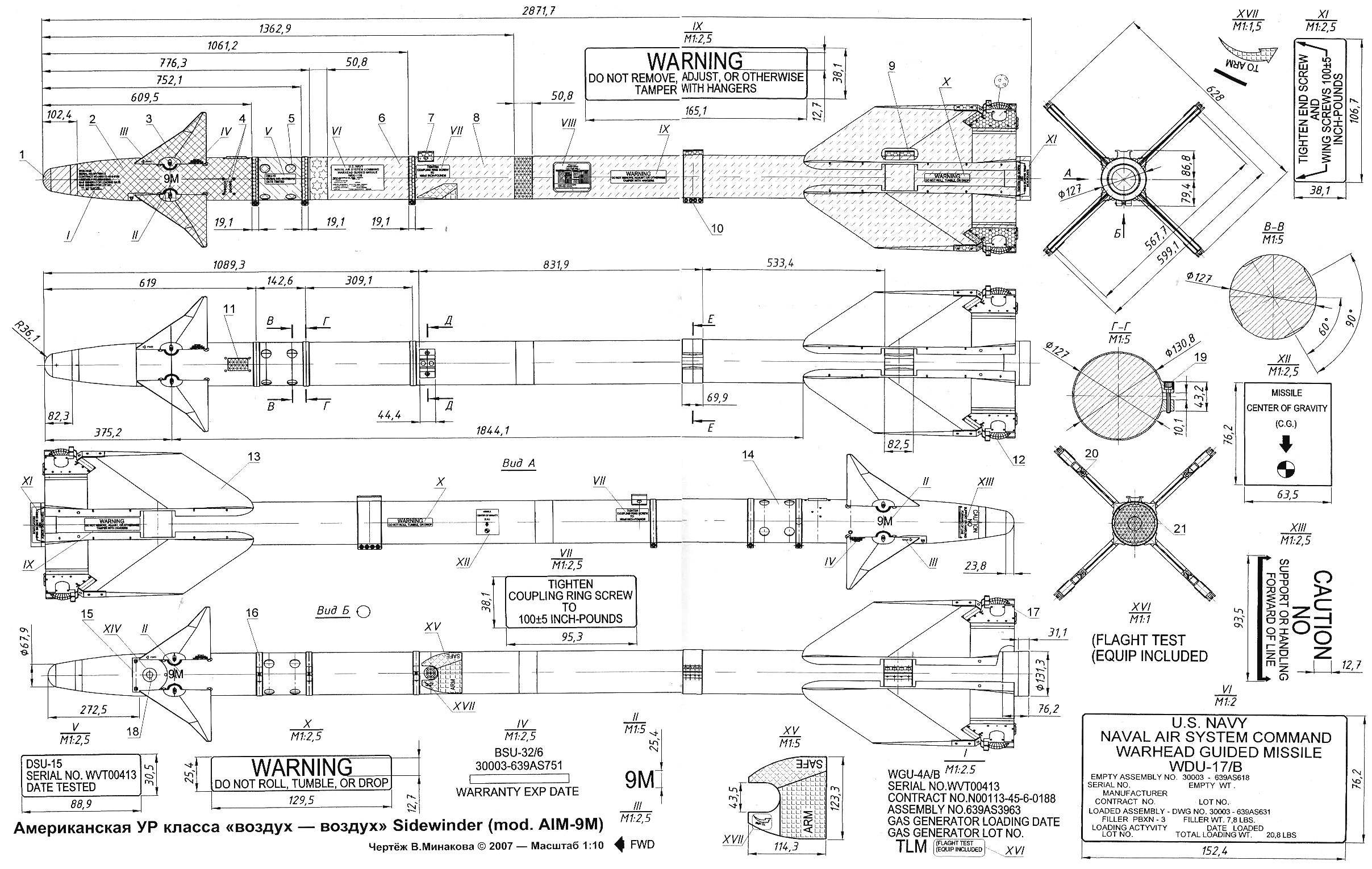 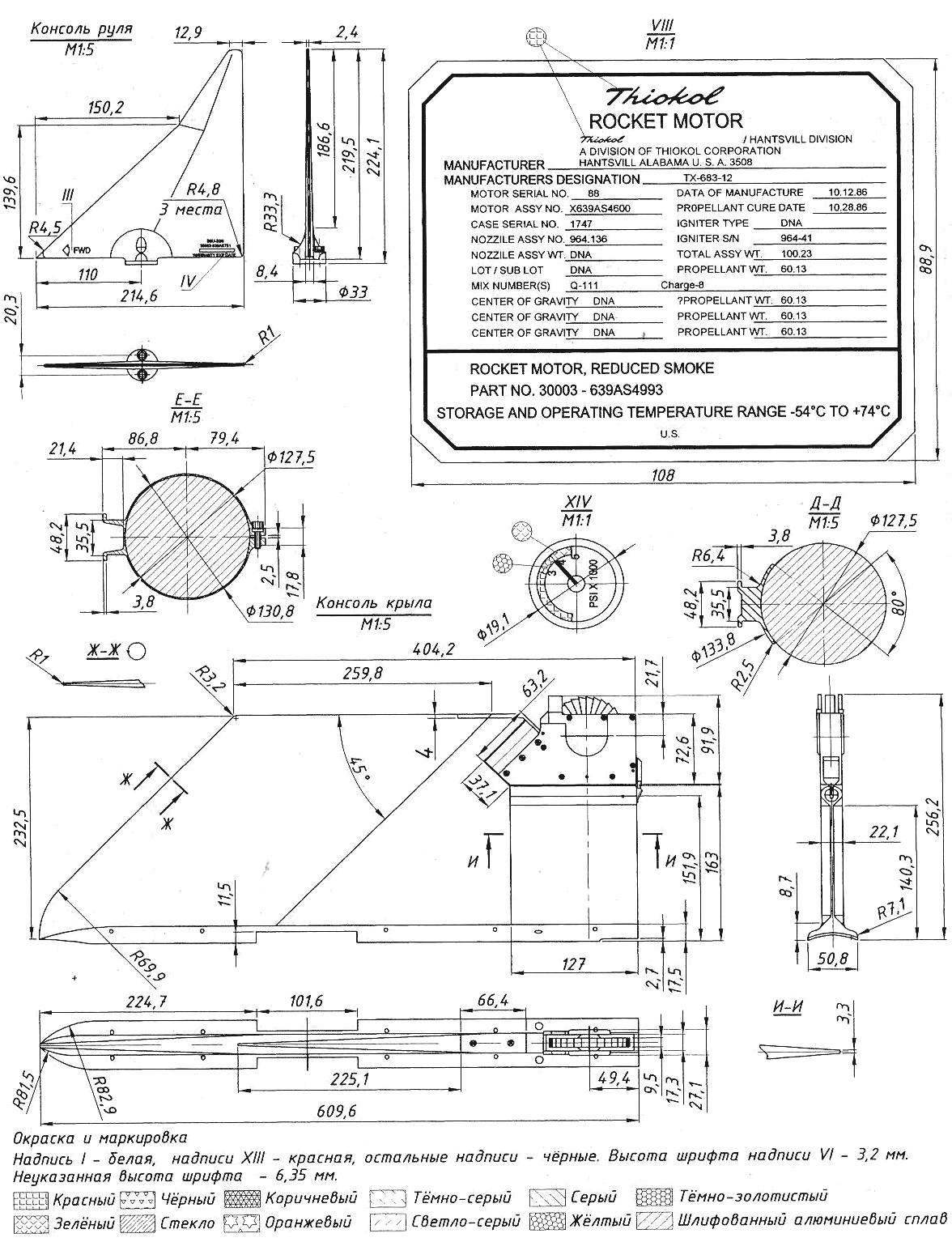 American missile of class “air — air” Sidewinder AIM-9M:
1 — glass lens IR-homing; 2 — compartment guidance and control; 3 — wheel; 4 — hole for discharge of waste gas; 5 — window laser proximity Fuze; 6 — high-explosive warhead WDU-17/B; 7 — front support bracket; 8 — solid-fuel rocket engine with reduced smoke Mk36. Mod.9; 9 — rear bracket; 10 — clamp secondary yoke; 11 — side connector; 12 — rotor rollerena; 13 — wing; a 14 — compartment laser proximity Fuze DSU-15; 15 — cover of the hatch operational; 16 — connecting clamp flange joints of compartments; 17 — rolleron; 18 — gauge dial cooling system photoshoprecovery; 19 — screw; 20 — stopper rollerena; 21 — engine nozzle
The funds allocated to the Navy to develop guided missiles, reduced, and NOTS are faced with the problem of funding the development of rockets, called NOTS — AAM (the missile “air — air”). At this time, the Navy Bureau of Aeronautics created a guided missile “Sparrow” UAV concept. William McLean knew how to inspire their ideas of volunteers of scientists and technicians NOTS.
McLean believed that with good management system will not only fly the missile, but even a barn door. These arguments with embarrassment close to my heart took his aerodynamicist Whether Ajillo: the first model “Sidewinder” were actually rectangular wings and rudders, and flew with them quite well. In the end, Agilo won, and the final version of the wings and rudders guided missile had swept front edge.
Problem counteract uncontrolled rapid rotation of the missile relative to the longitudinal axis decided technician Sydney Crockett. He proposed a narrow solid flywheel — rotor gyro in each of the four ailerons attached to the wings. His device was called rollerons. Flywheels had the teeth at the outer contour, protruding into the air flow which rotates with angular velocity. If after liftoff the rocket began to roll, rolleron automatically reacted, forcing the ailerons to deflect the air flow in the direction against the rotation, limiting the angular velocity of the roll.
Another wonderful design solution was a balance gas drive rudders “Sidewinder” with swivel point on them. The proposed McLean drive solved this complex problem created by the hinge moment on the rudder. At high speeds or low altitudes, when the aerodynamic hinge moment on the rudder the maximum rudder deviated by a small angle and at low speeds or high altitudes the aerodynamic hinge moment allowed the steering wheel to deflect at a greater angle.
For the further development of the guided missile needed significant resources, and the team MacLean has developed a number of strategies that help to convince the officials, on which depended the funding. One of the most successful techniques was to demonstrate the ability THSN to accompany not only the movement of aircraft in the sky, but a spark of the cigarette in the office.
In 1951, Admiral William S. Parsons, the Deputy chief of the Artillery Bureau, visited NOTS, McLean introduced him to the results of the work of his team. Parsons supported the inventor: “You make a weapon system”. Shortly after this visit, the team received the first investment of three million dollars. Shell received the official name of XAAM-N-7 and brand — “Sidewinder”, Maclean suggested his colleague Gilbert Playdom. A rattlesnake (Sidewinder), as TGSN, responds to thermal radiation production.
McLean himself designed the control system, but testing of other systems also required a serious approach. “Sidwinder” used “hot” gas drive. Gas was produced by a small solid propellant gas generator (GG), from which it is partially cooled and filtered is supplied to the turbine of an electric generator and servos, rudders deflected the missiles. Receiving hot gas with given properties and testing of a “hot” drive was a very difficult technical problem. Not immediately able to provide reliable operation of system in flight after tuning it on a laboratory bench.
Another successful design solution was the choice of the aerodynamic scheme “duck”, which allowed to place in one compartment TGSN, the drive wheel and the power unit.
This allowed to abandon the strip electrocute the body of the rocket, shrunk her midsection and increased reliability of the control system.
After ground testing, the team of William B. McLean approached the stage of flight tests. The first launch of the “Sidwinder” executed a participant of the war in Korea, Lieutenant of the Navy test pilot Walter A. Schirra. He later became world famous as one of the first American astronauts performed three space flight: October 3, 1962 on the spacecraft (SC)”, Mekuri-8″, 15 December 1965, aboard “Gemini-6” and 11 -22 October 1968 spacecraft “Apollo-7”. 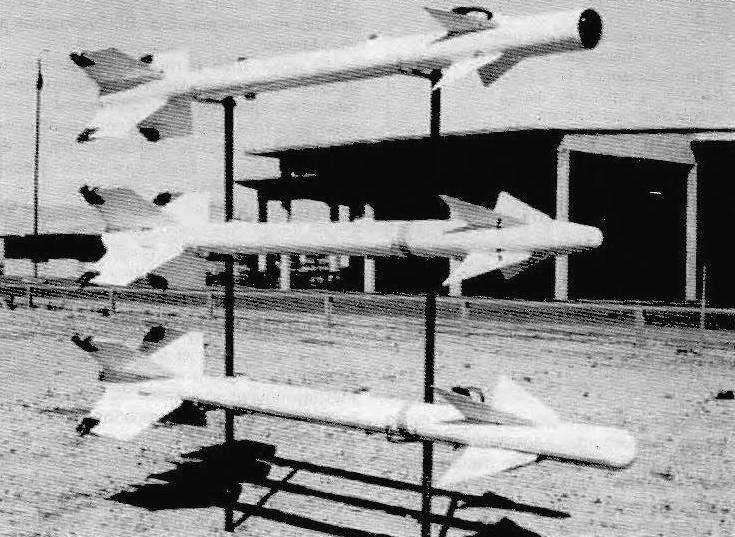 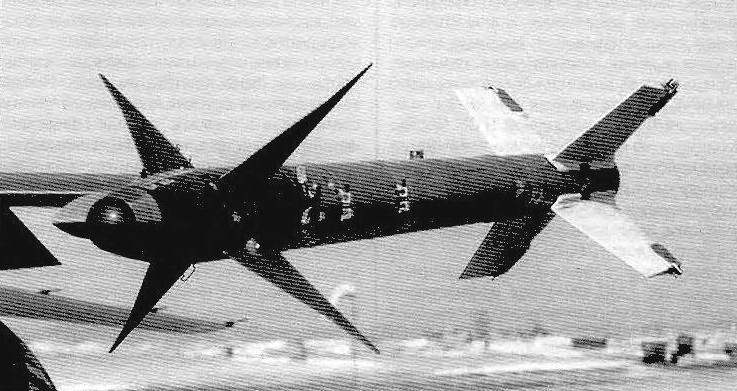