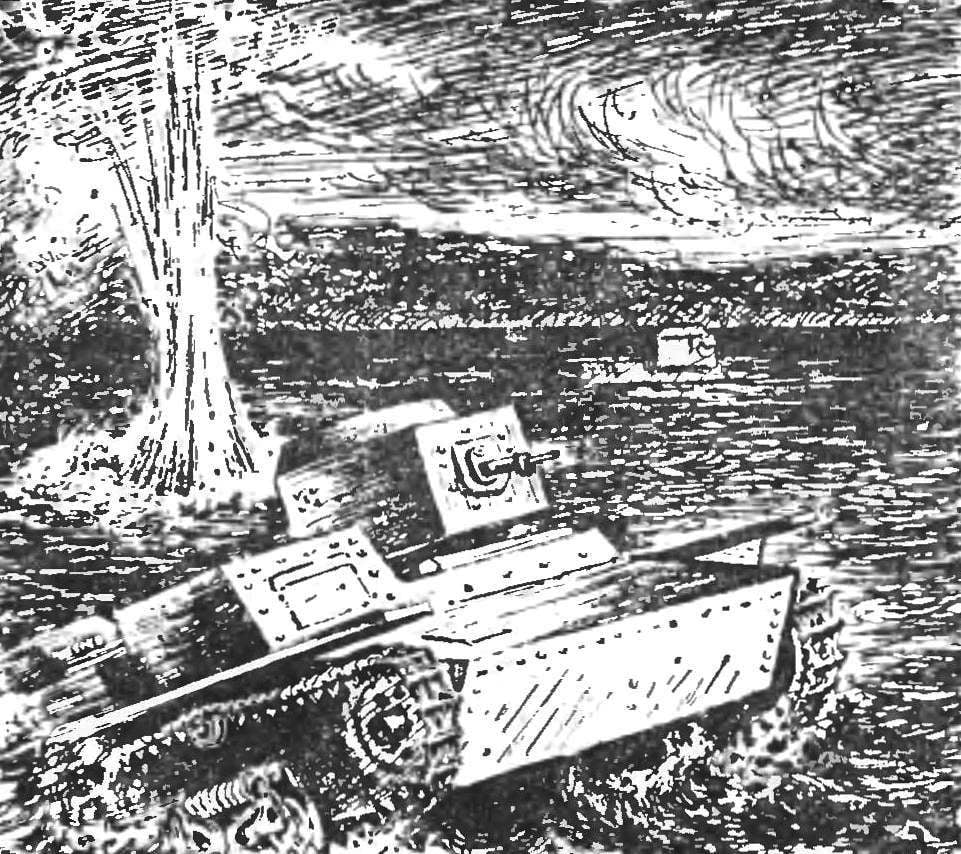 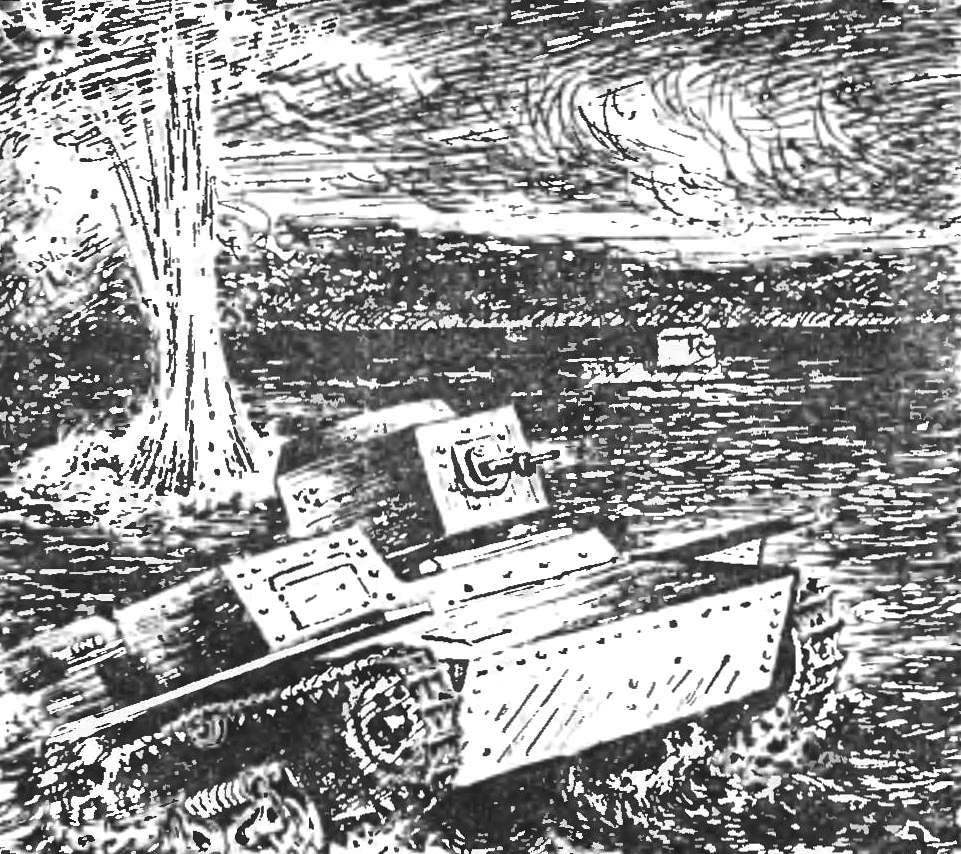 Designers and military experts, given the agile nature of modern warfare, and sought ways of creating machines that are able to provide diverse requirements and similar equipment.
For warfare of a different nature needed a versatile machine. Special importance was attached to the ground forces intelligence. And it was supposed to conduct with small tanks and tankettes. It was supposed to be a machine of small weight and dimensions. They had to secretly get to the enemy in full off-road; the armor protection they were supposed to protect the crew against bullets and splinters. And besides, they had the ability to swim, at least to overcome water obstacles along the bottom.
How to combine such conflicting requirements in a single machine? Many prominent designers were thinking. And the desired result was achieved only after many failures. An example of this — wedge T-27. Its small size has created difficult conditions for the crew. The internal volume of the machine was so small that the crews had to complete any of the tankers small in stature. The location of the engine in the Central part of the body has led to the increased gas content of the fighting compartment, plus to the engine, especially in the summer, turned the machine into a steaming hot oven. The designers abandoned the rotating tower to reduce the height of wedgies. Machine gun located in the frontal armor, worse maneuver by fire, has narrowed the review. Failed to solve one of the most important problems: the wedge could not overcome water barriers that limited the possibilities for exploration. The question of creating a floating tank remained on the agenda.
Designers have started to develop these machines had to be solved along with the special and purely “legal” issues: the way of water, management of afloat stability; it was necessary to determine the possibility of entry and exit. All of it is designed on an unbeaten paths: the experience of creation of amphibious tanks in our country is significantly ahead of the same work abroad. 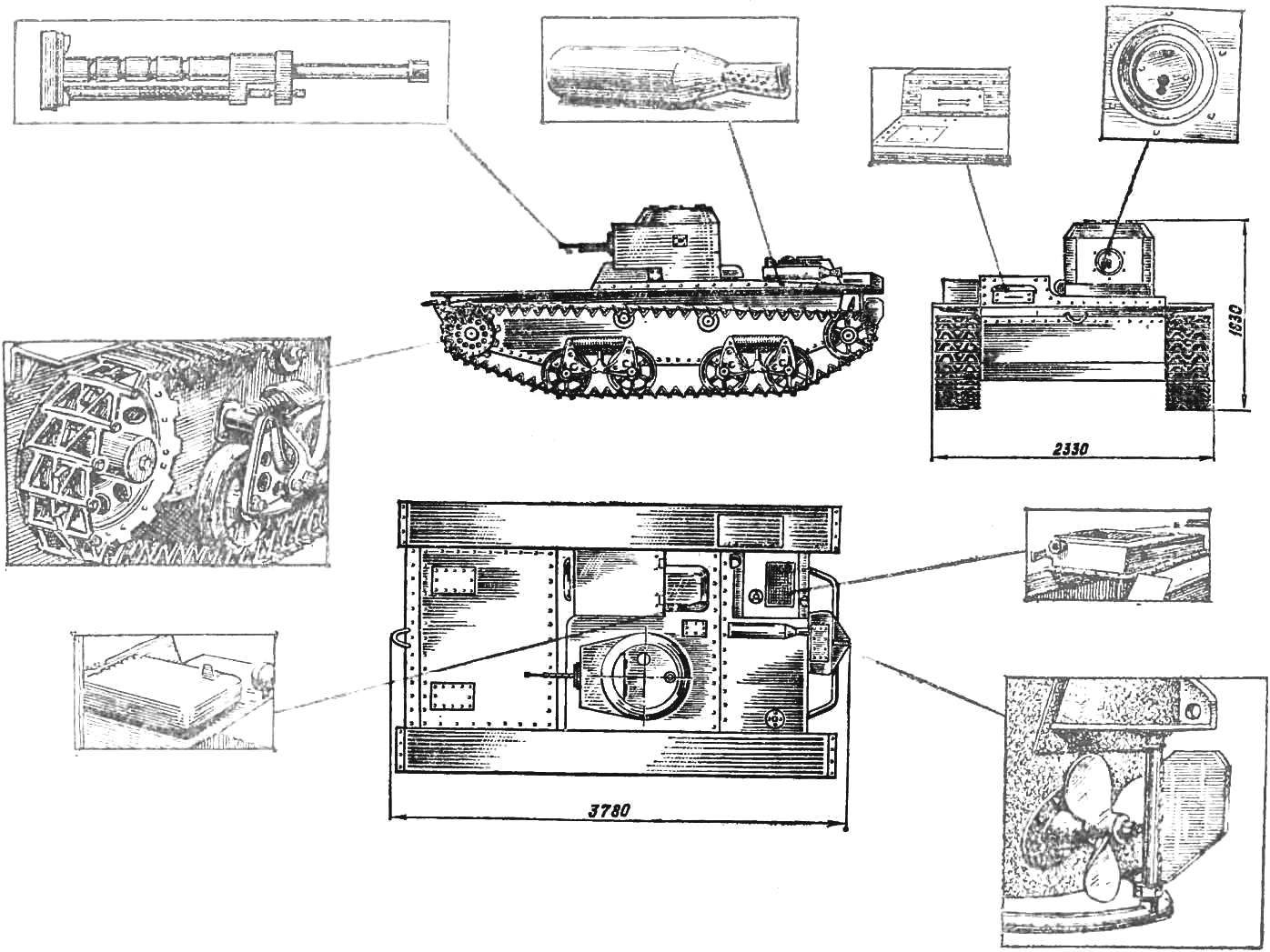 SMALL AMPHIBIOUS TANK T-38:
The second color shown (left to right): a machine gun, a silencer, a viewing slot, machine gun, cell, node, idlers and support rollers, blinds engine compartment, the intake hatch, the propeller and steering gear.
However, in 1919 the engineer of one of the plants G. V. Kondratiev, a shipbuilder by profession, presented to the competition announced by the Council of military industry, the project of amphibious tank. After some time, two such machines were built. The tank weighed about 10 tons, the engine capacity of 90 HP was placed in the aft. Afloat machine moved using a three-blade propeller. The tank was armed with quite powerful at the time of the 76 mm gun. The crew consisted of two people.
But since then, the time tank stepped forward so that the tank 1919 it was impossible to even take a starting point in the design.
Still, the floating tank was created. Its serial production was rocking in 1933. This car was assembled on the basis of motor units (GAZ-AA), had bulletproof armor, for land speed 36 km/h and ka afloat 6 km/h the Crew consisted of two people. Weapons (machine gun DT) was placed in a cylindrical tower.
In August 1935 seven amphibious machines started its trial run on the route Leningrad — Luga ka tracks, and then swim along the rivers Luga, Shelon, the Ilmen lake, Volkhov river, Ladoga intensity and the Neva river with access to land have Petropavlovskoy fortress in Leningrad. Managed the commander’s test Alexander Zhukov. Of the 700 km 600 was covered by water. The fording ka such distances was not a tactical necessity at the time, but the design of the tanks require a comprehensive long-term tests it is in motion on the water. Water element is often put to test a completely unexpected problem: the thick seaweed was wound on the screw, the rapid current forced the engine to run at the limit, had to overcome the eddies, whirlpools, rapids, the storm ruffled machine in one of the tunnels. However, the drivers of the mechanized column has successfully completed the flight, bringing the tanks to the finish without accidents and breakdowns. Mileage has accelerated further improvement of the floating machines. 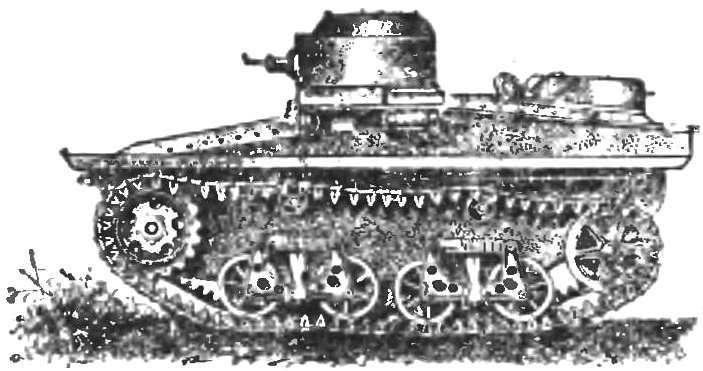 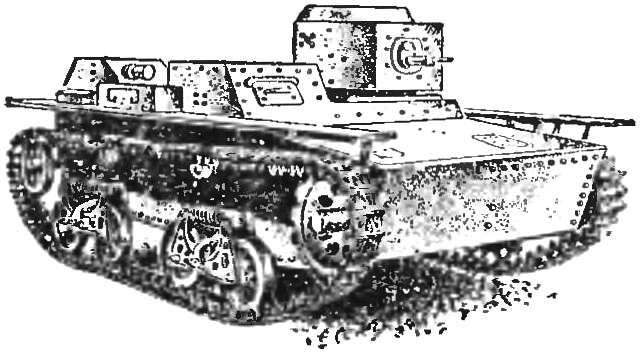 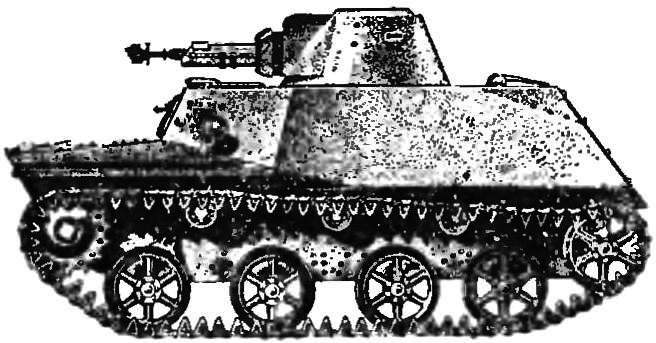 Fig. 3. Floating tank T-40.
Soon was created the modification of the amphibious tank T-37A (Fig. 1). It was a propeller with rotating blades, which provided a afloat back. And in 1936, the troops began to enter a new tank T-38 (Fig. 2). This machine is, weighing only 3.3 MT was lower, but slightly wider than its predecessor. Has been improved suspension, instead of the differential gear set friction clutches. Upgrading the suspension provided a smoother ride. Specific ground pressure could decrease. At the same time, the thickness of the frontal and side armor remained the same — 9 mm. Weapons and speed is also not changed. The crew consisted of two people.
In 1938 there was a modification of T — 38M-2. It was heavier, but more high-speed machine: the velocity has increased to 46 km/h. the Latter was achieved by installing a more powerful engine and gearbox from a passenger car M-1.
Small weight and sizes of small tanks T-37 and T-38 drew the attention of the Marines. It is very tempting seemed to enter into the amphibious groups such a powerful and maneuverable machine. Experiments were carried out on the transport tanks of the aircraft. Machines were attached to aircraft TB-1 and TB-3 were used in landing troops on maneuvers 1938-1939. The experiments were carried out on discharge from the aircraft to the water surface of tanks T-37 and T-38. To this latter was attached to the ventral bomb racks locks. 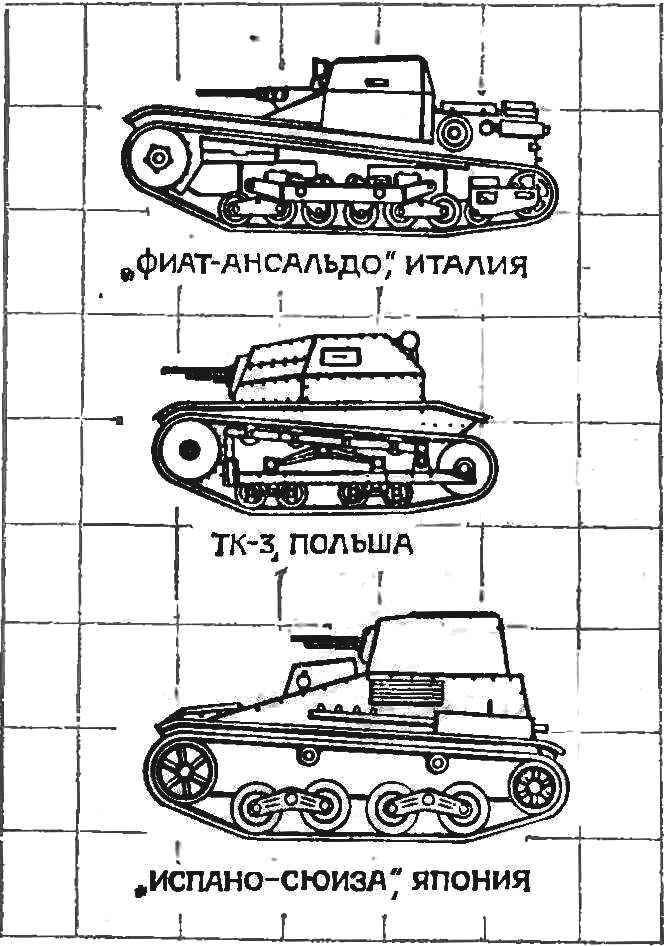 Comparative sizes and silhouettes floating tanks of the period 1935-1937 years.
Small tanks took part in the first battles of the great Patriotic war. “Our company of tanks T-37 crumples unprecedented harvest wheat — recalled party of border fighting, the Hero of the Soviet Union the officer, Panico, we go out on the right flank of the division. My “baby” at the head of two platoons, scribe bottom over bumps and the hollows, quickly rushing to the grove, on the edge of which rose the fountains of tears. We managed to beat the Germans and occupy the Western edge of the grove. Second platoon was pushing the enemy motorcyclists and restricts them to me. With speed and slam into a group of motorcycles and Sekou their queues. Nimble three-wheeled cars are scattered to the sides… Both of the platoon for the running opponent strode across the ridge, and I saw over the green waves of wheat chain big dark cars. They pulled a gun… Barely having time to give the red rocket, I open almost in focus fire through the wide glass of the oncoming car. Skew and startled, she froze on the spot…”
In intelligence, in covering the flanks from enemy infantry fighting vehicles have played a significant role. However, combat experience showed that the 9-mm armor — very weak protection in modern combat, and weapons left much to be desired. Replacement of the older tanks do not have to wait long. It was a T-40 (Fig. 3), created in 1940 under leadership of N. A. Astrov. The crew was protected by a 15-mm armor. Armament consisted of a heavy machine gun DShK (12.7 mm) and DT machine guns, paired in a single unit. The engine capacity of 85 HP allowed to reach speeds on the highway up to 45 km/h, afloat — 5 km/h. Control the water by two propellers. Land version of this car was named T-30.
However, some tanks T-37 and T-38 were in combat formations of some parts of the Soviet Army until the end of the war. Together with its younger, but much more powerful and modern counterparts, KV, is, with the famous thirty, they participated in the final defeat of the enemy. This is largely due to the fact that a decade after its birth, small amphibious tank T-38 remained design, superior tactical and technical data of similar foreign machines.
A. BESKURNIKOV